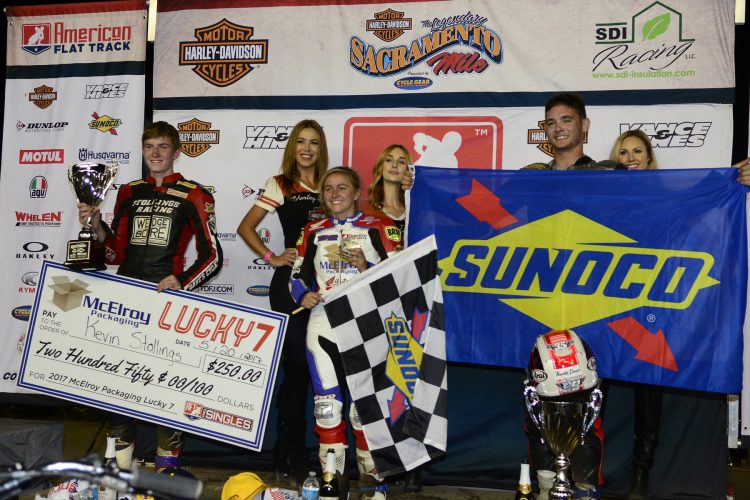 It was the eighth career AFT Singles victory for Texter and her third at Sacramento. The victory grew her advantage in the standings after five of the 18 rounds of the 2017 campaign. The triumph continued her streak of podium finishes that began with a third-place finish at the Atlanta Short Track, then second at the Charlotte Half-Mile and victory last weekend at Phoenix.
Texter made her winning move on the final lap of the 15-lap race aboard the No. 52 Richie Morris Racing Honda CRF450R, and winning by 0.065 seconds over fellow Honda rider Tristan Avery, with early race leader Kevin Stollings a close third. For her efforts, Texter was recognized as winner of the Motul Move of the Race Award. She also won her Heat and Semifinal races.
“I knew I had to run 15 good laps, but I got a little nervous when the five to go came out,” said Texter, who is supported by American Honda, Al Lamb’s Dallas Honda, Tucker Rocky, Performance Electronics, ProTaper and Roland Sands Design. “I definitely didn’t make it easy on myself, getting a bad start. Stollings was hitting his marks perfectly. I tried to do everything a little bit harder, a little bit faster. Finally I hooked on to his draft, and then Avery joined in. I was able to play my cards right and came on to win!”

Texter managed to split Avery and Stollings in a three-wide move with two laps remaining to take the lead for the first time. On the final lap, she launched past Avery exiting the final and went on to win.

“Shayna made what I considered one of the most exciting moves that I’ve seen in a long time,” said Team Principal Richie Morris. “It was a dogfight that came down to the last corner of the last lap, and she timed it just right. I’ve never seen a crowd react like that – the whole place was shaking.”

In AFT Twins competition, Jarod Vanderkooi finished in the top 10 for the fourth consecutive race, placing 10th riding his aboard his No. 20 RMR 650 Twin that is sponsored by McElroy Packaging, Tucker Rocky, Roland Sands Design, ProTaper and Performance Electronics. The young star is now fifth in the AFT Twins championship.
“Jarod learned of a death in his family on Saturday morning, and understandably didn’t have the start to the event that he was hoping to,” said Morris. “But he continued to focus and fought his way to 10th at the finish there. The team will keep plugging because we feel like we’ve got a winning rider in Jarod, and we will keep working to make that happen.”

Texter will be doing double duty as American Flat Track holds a split program next weekend at the Illinois State Fairgrounds in Springfield. Texter will seek her third consecutive AFT Singles triumph in Saturday’s Springfield TT. She will then join RMR teammate Vanderkooi on a Twin on Sunday, competing in the Springfield Mile I – the third of four Mile races on consecutive weekends for the AFT Twins class. Both the Twins and Singles will compete in the Red Mile in Lexington, Ky., on Saturday, June 3.