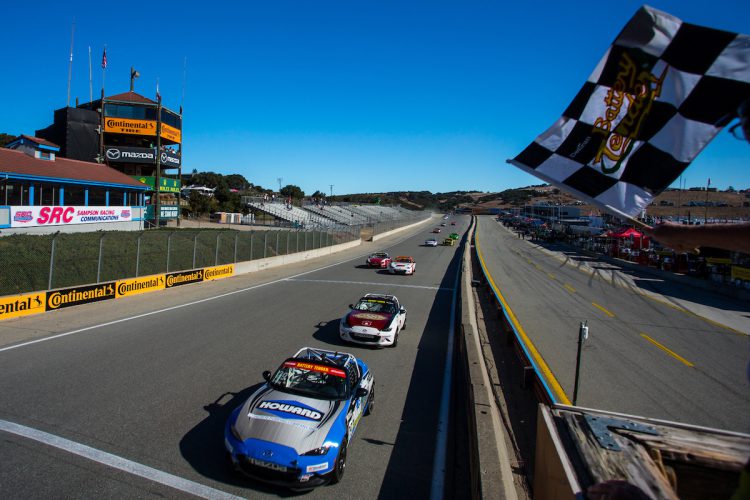 IRVINE, Calif. (9 October 2017) – For one fortunate racer, it will take just 90 minutes to earn $75,000, or more, this Saturday at Mazda Raceway Laguna Seca as Mazda stages the Global Mazda MX-5 Cup Challenge.  Both 45-minute races will be live streamed on Saturday, October 14.  Race one will be at 12:40 pm, while the second race will start at 5:00 pm.  Both are Pacific time zone.  The races can be viewed at:

Every driver in the field will utilize the wildly popular Global Mazda MX-5 Cup machine, which will put the results in the racers’ hands. Using the same exact same production SKYACTIV 2.0-powered Mazda MX-5 as the starting point, the cars are race-prepared at Long Road Racing in Statesville, North Carolina to ensure parity across the field.

Last year, Nathanial “Sparky” Sparks added the title of ‘Global Invitational Champion’ to his racing resume after having just been crowned the 2016 Battery Tender Global Mazda MX-5 Cup presented by BFGoodrich Tires champion. 2017 MX-5 Cup Champion Patrick Gallagher will seek to do the same.  For Gallagher it will be an opportunity to add to his $200,000 Mazda Road to 24 scholarship.

But he will have some fierce competition, starting with some fellow champions. Sparks, 2015 champion John Dean, and 2014 champion Kenton Koch all bring their MX-5 Cup championship credentials to the race.

The four returning champion drivers, who have claimed over $1,000,000 in scholarship and contingency winnings from Mazda, all have the same goal on Saturday. Koch, who enters the Challenge event hot on the heels of his double-win weekend at Road Atlanta in IMSA Prototype Challenge presented by Mazda competition, is clear about his goal for the Challenge event.

“I wouldn’t be doing this race if I didn’t think I had a good chance of winning it,” said Koch. “I will have my same engineer at Murillo Racing as I had when I won the (MX-5 Cup) championship. And we will even be running the same number (No. 12) — no superstitions but we just wanted to keep that consistent! There is obviously going to be a lot of competition — past champions like Gallagher and Foley and Dean, and Kyle Kaiser coming in as well. I used to race against him (Kaiser) at Mazda Raceway Laguna Seca seven years ago when we were both getting started. Having driven the new Global MX-5 Cup car, it is very quick and nimble. I’m looking forward to getting in it and racing against some cool guys.”

It isn’t just MX-5 Cup champions who will be fighting for the cash, as 2017 Indy Lights presented by Cooper Tires champion Kyle Kaiser (Santa Clara, Calif) will look to add to his significant haul of support from Mazda with a big close to a season that has already earned him the chance to race in IndyCar competition in 2018.

“I did my Skip Barber Racing Schools there, and I did two years of the regional Skip Barber series and the majority of the race were there,” said Kaiser about Mazda Raceway Laguna Seca. “I also had my Pro Mazda debut there in 2012. I’ve driven the track in many different cars and have always been fast, so I hope for more of the same. The races that I’ve had the most family and friends at have been my best races, so I’m hoping a lot of people end up coming to this one!”

In addition to Kaiser and Koch, also carrying the flag for local racers will be Mazda Road to 24 Scholarship winner Matt Cresci (No. 51 Slipstream Performance). There will once again be international interest in the event, as Japanese racers Tetsuya Yamano (No. 7 Winding Road Team TFB) and Takashi Oi (No. 56 Winding Road Team TFB) will be making their debut Stateside this weekend.

Yamano won the 2017 Global Mazda MX-5 Cup Championship Japan which allowed him the special opportunity to compete against some of Mazda’s top drivers. Yamano also has race experience in Super GT where he won the GT3000 category in 2004, 2005, and 2006 and is a 17-time champion of Japan Gymkhana. Oi hails from Tokyo, Japan and began his racing career in dirt trials when he was 18 and continued on to compete in Group A Super Endurance racing in Japan. Outside of racing himself, Oi is a journalist and race instructor.

Other notable racers include 2017 Rookie of the Year Robert Stout (No. 28 McCumbee McAleer Racing), who just earned Mazda’s $50,000 scholarship, and Bryan Ortiz (No. 29 Copeland Motorsports), who was the runner-up in the 2017 Rookie of the Year battle.  Europe will be represented by Bart Wubban from Utrecht, Netherlands (No. 27 McCumbee McAleer Racing).