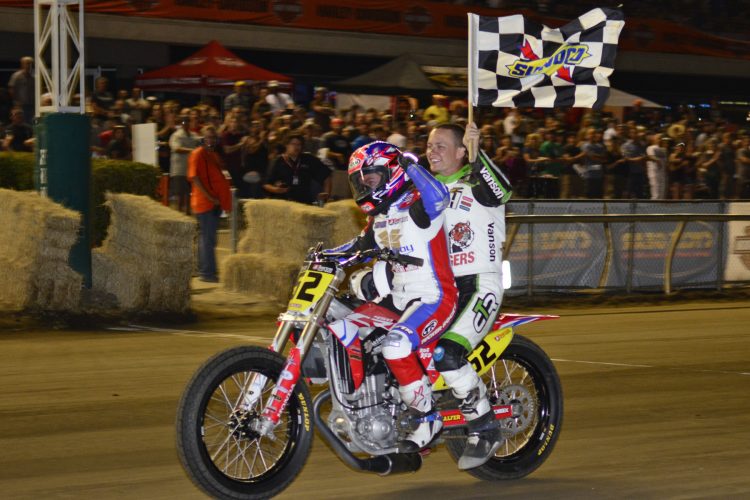 An eight-time winner in AFT Singles competition, Texter also won a pair of races on the Springfield Mile in the Basic Expert Twins class in 2013. The move to the TT format is one that has Texter focused on the end results from the weekend.

“I’ll be putting my head down and trying to do as good of a job as possible, pushing to get up front in the TT,” said Texter, who doesn’t consider the TT format to be her strongest point. “Then on Sunday, I’ll be racing one of the Richie Morris Racing team bikes for the Twins event. It will be good to get back on a Twins motorcycle, and hopefully I can help the team continue to develop the bike and give the team added feedback to help Jarod (Vanderkooi).”

“We’re really looking forward to Springfield,” Vanderkooi said. “Last week was a bit rough on us but we’ve continued to work as a team to make progress. Springfield would be a perfect place to showcase what we are capable of doing”

“We’re going to do the best we can and try to get a good finish,” Vanderkooi said. “Last week was a bit rough on us but we’ve continued to work as a team to figure everything out. Hopefully we will be fine. I’ve always qualified well at Springfield in the past, but I’ve had bad luck and mechanical issues on my personal bikes. I’m looking to rebound at Springfield – it’s a little more consistent than the Miles we’ve raced on the past two weekends.”

“I think she’s a much more confident rider than she was at Daytona, where we missed the setting on her last qualifying run,” said Team Principal Richie Morris, referring to the season-opening DAYTONA TT where Texter failed to qualify for the evening program. “We’ll have a much better bike for her for the TT, and she has a much better mindset now. Since the Singles race is on Saturday, there will be no pressure on her on Sunday – she will be able to go out and ride the Twin on her favorite track. When she decided to concentrate on racing Singles this year, we also wanted her to run the two Springfield Miles since they didn’t conflict with the Singles. I think she’s got a chance to win the darn thing!

“The noise-reducing rule that was put in place right before Arizona really hurt us,” Morris said of the Twins bikes. “We found a few things this week that I think will help us and get us past the Indians. We’re doing everything we can to make up the horsepower we lost. I think Jarod (Vanderkooi) will be much more competitive this weekend.”