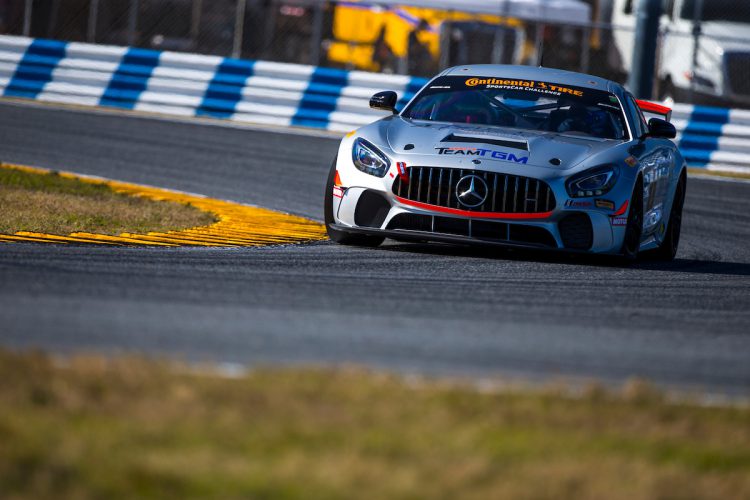 The team, which only took final delivery of the two Mercedes-AMG GT4 GS machines earlier this month, lead the race with both machines and finished with a double top-ten finish in the debut outing with the all-new GT4-spec machine after proving to be a consistent front runner throughout the four hour endurance event.

Following a frustrating qualifying effort that found the squad looking for more pace, the BMW Endurance Challenge proved to demonstrate potential that the team hopes to unlock from the powerful V8 twin turbo’d GT4 package. 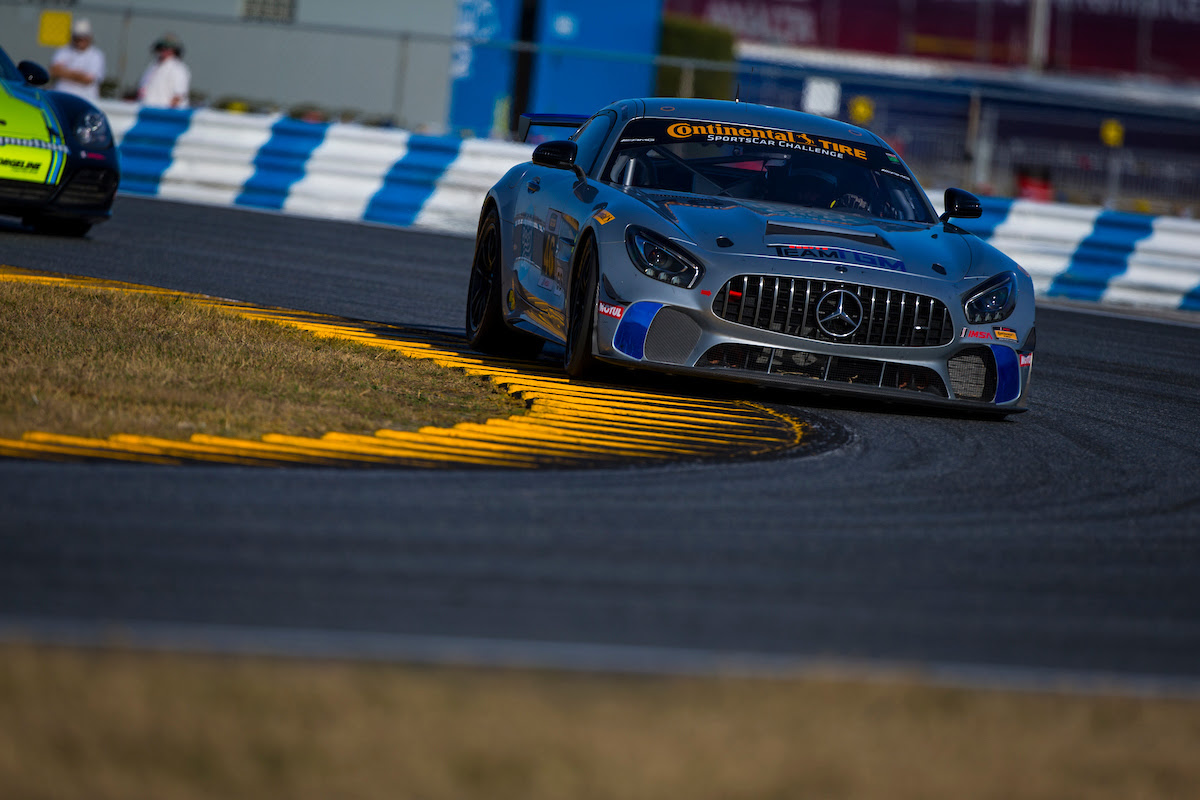 Giovanis and Plumb had strategic stints as both drivers managed the pace and the traffic through a hairy and hectic start as 41 cars took the green flag. Giovanis picked up seven positions in his stint before he handed the car over to Cosmo on lap 22.

Plumb had an equally consistent start making up several positions before turning the car over to Trinkler. An experienced racer, Trinkler maneuvered his way to the front of the pack, ultimately clocking in the first lead laps for the Mercedes-AMG GT4 in IMSA competition before heading to the pits for service.

As the second half of the four hour race commenced, Cosmo and Plumb returned behind the wheel and drove impressive double stints to close out the day. Cosmo drove the No. 4 machine to the front of the pack on lap 70 as both TeamTGM machines enjoyed time out front. Some fierce fighting for the lead saw him make a stellar play to hold off second place before needing to pit for fuel and tires. 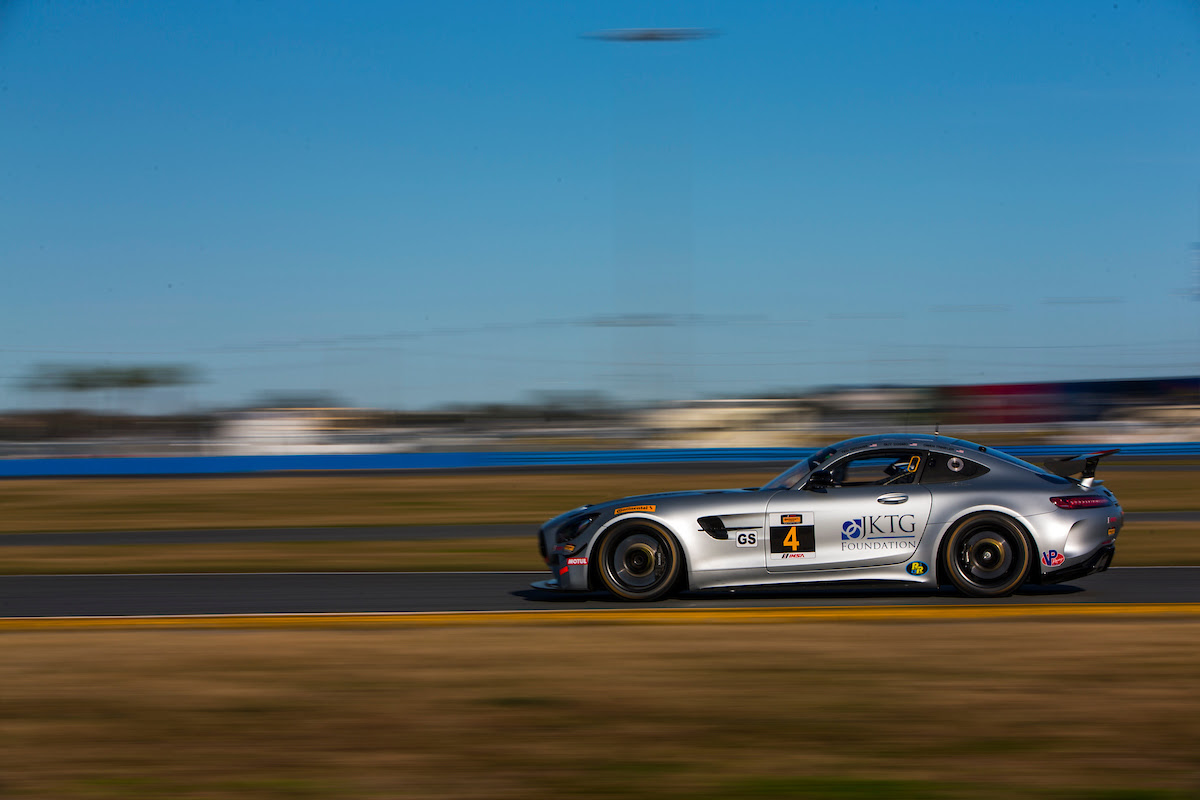 The race concluded with both TeamTGM machines making a resilient effort and leading the most combined laps of any of the Mercedes-AMG GT4 teams. Both machines crossed the checkered in the top ten with the No. 46 finishing sixth and the No. 4 finishing ninth. Several hours after the race was complete, IMSA determined that the No. 4 race result was to be annulled following a drive time issue (one of the listed drivers on the car did not race in it).

None the less, the exceptional ambition by the four driver lineup was only the beginning as the team is feeling poised to contest in the rest of the 2018 race season at a competitive level. The next event for TeamTGM will be at Sebring on March 14th – 16th.

Ted Giovanis No. 4 JKTG Foundation / Camp Boggy Creek Mercedes-AMG GT4: “Both cars did such a good job. For the No. 46 to get up to the front of the field and for (Guy) Cosmo to also finish in the top ten is really a great thing for us. Cosmo did a really great job closing out the race. I couldn’t be more pleased with the team and all of the drivers did such a great job throughout the whole race.”

Guy Cosmo No. 4 JKTG Foundation / Camp Boggy Creek Mercedes-AMG GT4: “That was racing! It was great, I really had a lot of fun. That was some of the hardest racing I have had in a long time. As silly as this might sound, I am very proud of all the drivers in the series, because as hard as that racing was, it was so clean. I’d do that all day long. It was a great effort by the team, even if it wasn’t the result we were looking for. The field is more competitive than it has ever been, and I’ve been in and out of this series since 2003. It’s going to be a hard year, but we’ve gotten through our first race and learned a lot about the car: how it runs in the long run and what we think we need for outright pace. I’m looking forward to making some gains before Sebring and then hitting the track again.”

Hugh Plumb No. 46 JKTG Foundation / Camp Boggy Creek Mercedes-AMG GT4: “That race was filled with all kinds of action. At the beginning, it was a real drafting competition, until the race settled in. The crew did a great job with our short fill (on fuel), getting us back out onto the mat for some more drafting. That was a direct result of how good our guys are, with Joe (Varde) and Brandon (Perrott) up in the box and looking out for us. I don’t think we would have ended up where we did on sheer speed; the numbers were just not in our favor. My hat’s off to TeamTGM and Ted Giovanis for getting behind us all. He did a great job being consistent today and I’m really happy to be a part of the TGM effort.”

Owen Trinkler No. 46 JKTG Foundation / Camp Boggy Creek Mercedes-AMG GT4: “We go in thinking top-10, and then we get the lead middle of the way. When I got the lead, we made the pit stop, and then, man you get up to third at the end with a caution. It’s only been three weeks getting two cars together, and with Joe Varde and Brandon Perrott’s help leading the crew, it went really well for us today. Ted Giovanis, has given us the tools to be competitive with both teams and that showed here today. Both cars did lead this race, so Mercedes has got to be happy. I think we’re happy as a team. We got good points out of here, and Hugh (Plumb) and I go on to Sebring and see what we can do there. We’re going to win some races this year, but a top-10 is good. We came out of here clean and didn’t make any mistakes.”