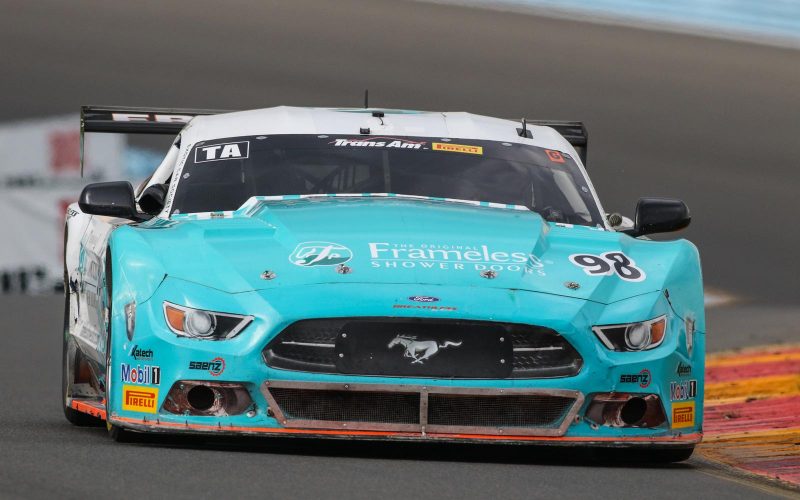 Pierce and Davison Fastest in SGT and GT 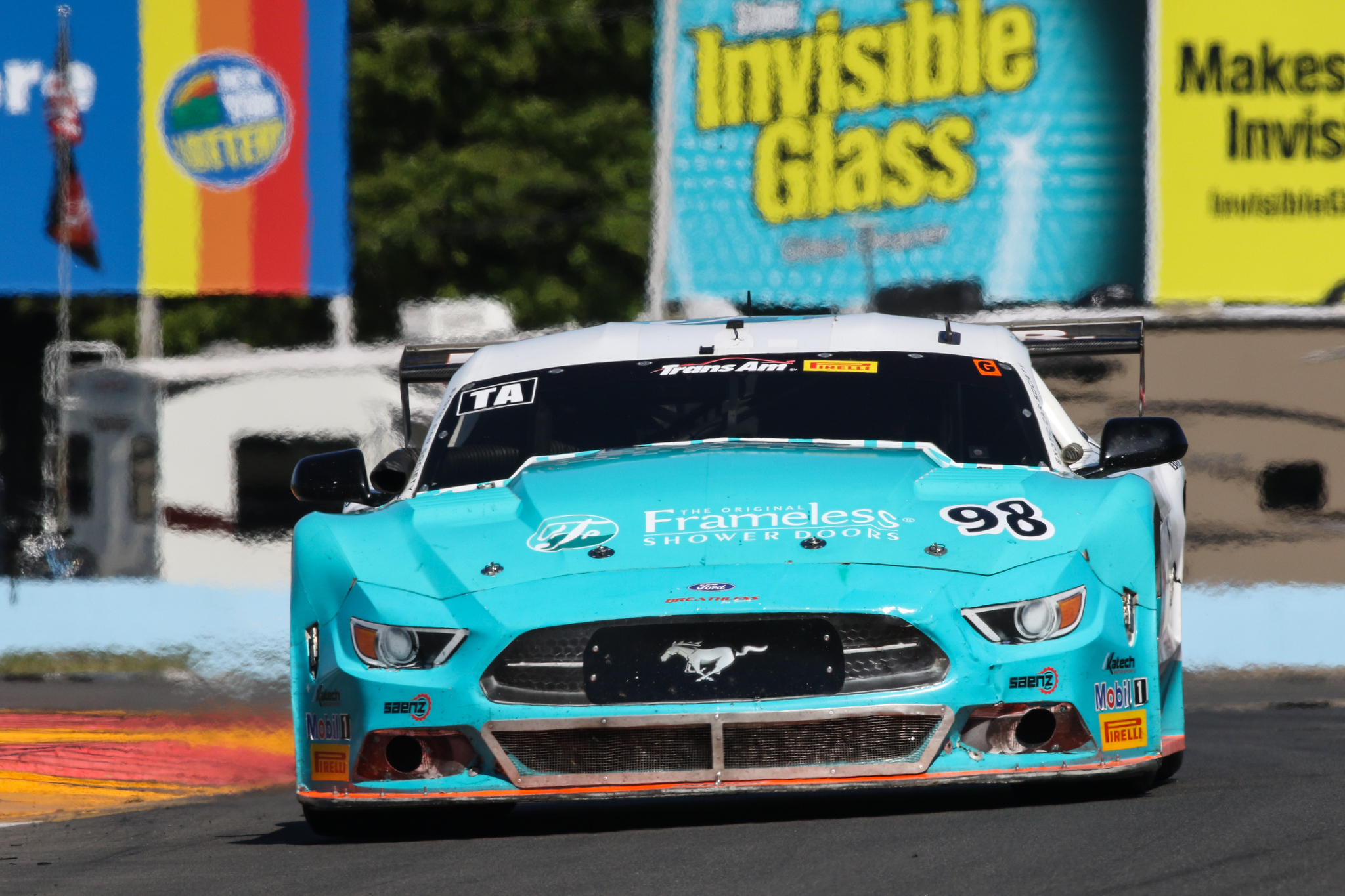 WATKINS GLEN, NY (7 September 2019)- The Trans Am Series presented by Pirelli Trans Am, Super GT and GT classes took the green on qualifying late Saturday for the final session of the day at Watkins Glen International to set the grid for Sunday’s multi-class feature at the iconic 3.4-mile, 11-turn upstate New York circuit.

As the session went green, Ernie Francis Jr. waited in his No. 98 Frameless Shower Doors Ford Mustang in pit lane for most of the 15-minute session before finding a gap in traffic to make his move. His second flying lap did the trick as he edged out veteran driver Boris Said to claim his fourth pole of the season. After clocking a fast time of 1:45.201-seconds, the defending TA champion returned to pit lane after just three laps.

“We used a similar strategy that we’ve been doing the rest of the season,” Francis Jr. said. “We just waited so we can get a clean track. It’s worked out pretty well in our favor so far. Getting that extra point is really awesome for pole position as the championship starts to wind down. We have a lot of speed here and I’m having a lot of fun driving around this track.”

Driving the newly-prepared No. 2 Technique/SRI Performance Dodge Challenger with an electrifying lightning bolt livery, Said missed out on pole position by just .341-seconds. 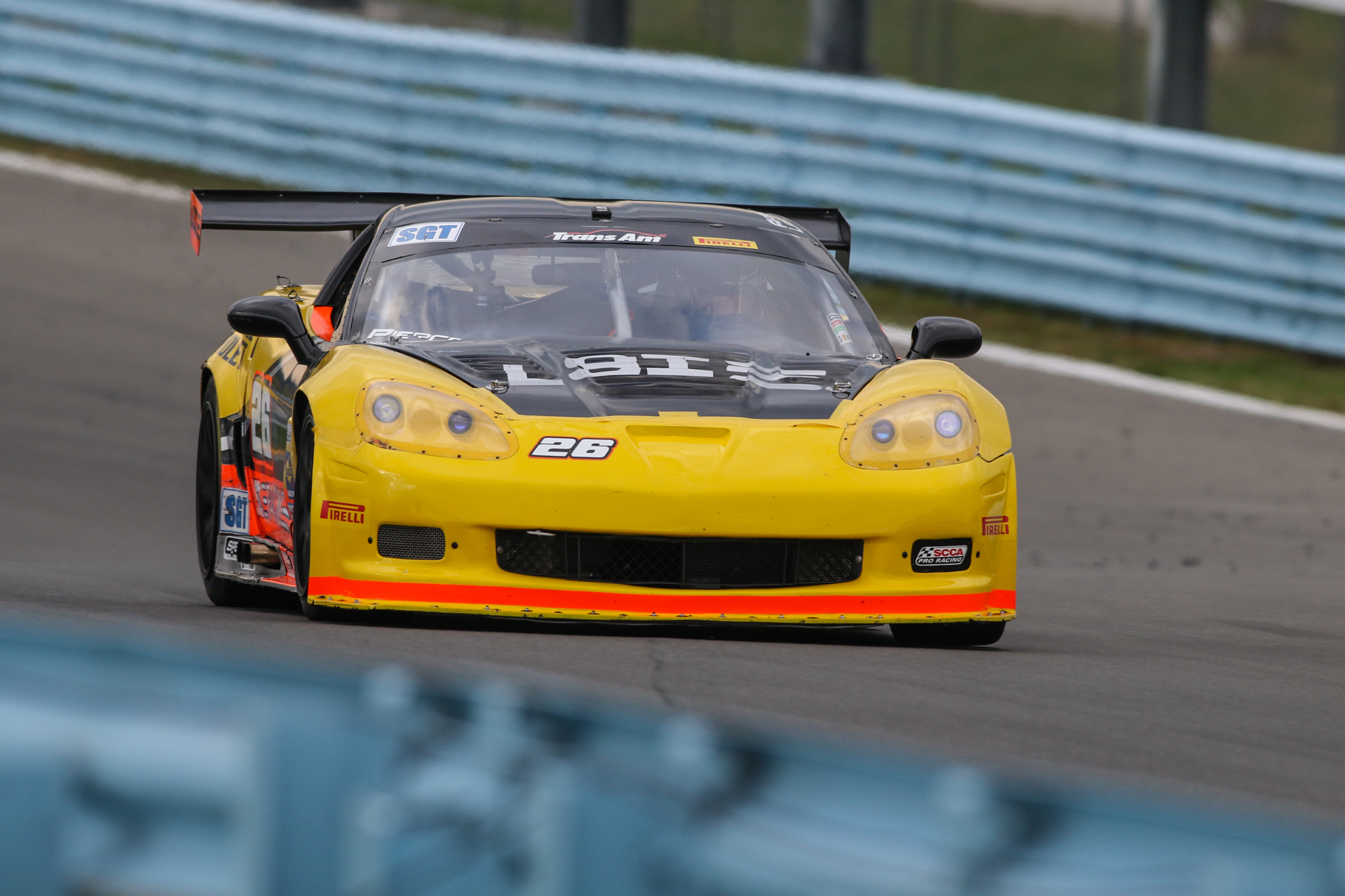 “Qualifying went pretty well considering this is a brand-new car that Poncho just built and this is the first time it’s really been out,” Said explained. “We have a few little teething problems we have to fix before tomorrow, but right now the speed is really fast. I’m not in it for the points, those guys have a tight points battle going on between Ernie (Francis Jr.) and (Chris) Dyson, so they better watch out for me because I’m going for broke!”

In the final lap of the session, Chris Dyson laid down a solid flying lap of 1:46.671-seconds to start on the sharp end of Row 2 in the No. 20 Plaid Ford Mustang. Dyson was forced to miss Thursday’s test session due to scheduling conflicts and only turned minimal laps in Friday’s practice.

“Qualifying was frustrating,” Dyson said. “We unfortunately missed it on the tire pressure. The car never quite sparked up. We missed out on running Thursday, so we only had yesterday to go off of. The guys and I took a guess on the tire pressure and we were way too conservative and obviously with the track being this cold, we struggled. It took me a lot of laps to get in my time. I think that explains most of the gap. We have a lot of work to do tonight to get ready for tomorrow.”

The “Rockin’ Moroccan” Tomy Drissi returned behind the wheel of the No. 8 Lucas Oil Slick Mist/Axalta Chevrolet Camaro for Burtin Racing after being sidelined for the last three rounds due to injury. Drissi, who won at The Glen in 2018, reminded everyone on track that just because he’s been out, didn’t mean he lost his speed. With a fast time of 1:47.050-seconds, Drissi will start in Row 2 beside Dyson for Sunday’s 100-mile feature.

“It was a very tight qualifying round today,” Drissi said. “The No. 8 Lucas Oil Slick Mist Chevrolet Camaro will start on the second row, which means I only have to pass three cars to take first. The fans here at Watkins Glen are great and we are looking for another win here tomorrow.”

Paul Fix (No. 4 Ave Motorsports Ford Mustang) rounded out the top-five with a fast time of 1:47.710-seconds.

Fighting a cold track, wind and incoming rain, the SGT/GT mixed class qualifying was a bit more dramatic than the TA session. Shortly after going green, the session was cut short when Tim Kezman, who was fastest in Friday’s practice, spun entering into The Bus Stop, making full contact with the wall. While he emerged unscathed from the incident, his No. 44 Lemons of Love Porsche 991 GT3 Cup did not. Unable to fix the substantial damage sustained during the accident before tomorrow’s early race, Kezman will drive his teammate Mark Boden’s backup No. 47 Fall-Line BMW car. 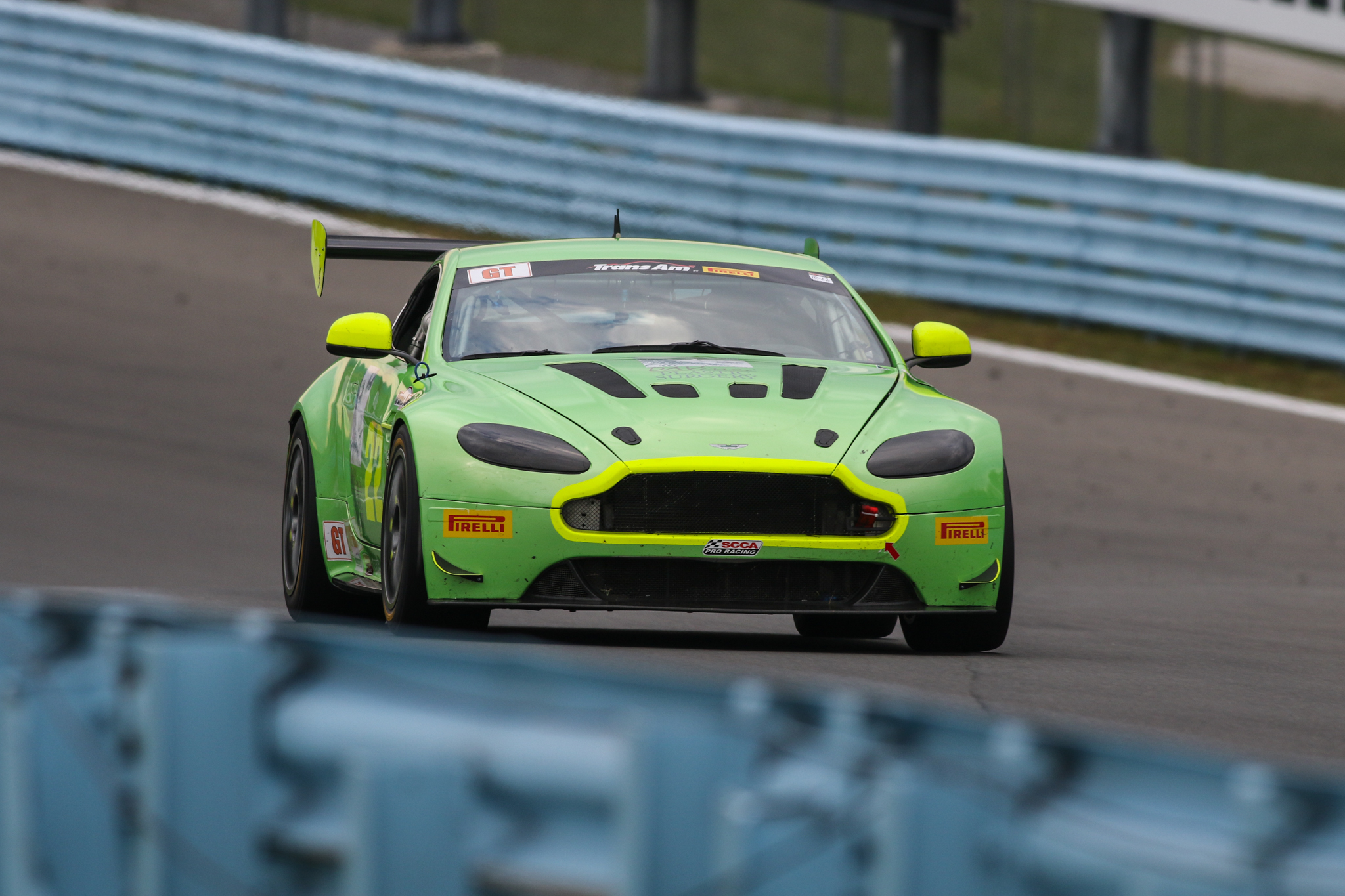 “I got a bit greedy today,” Kezman said. “I am lucky to walk away from this and we will work to get the BMW ready for tomorrow.”

Aaron Pierce in the No. 26 Sam Pierce Chevrolet/LogicalSystems Inc. Chevrolet Corvette will start on pole, laying down a time of 1:52.973-seconds. Pierce was one of the first drivers out on track and got a solid two laps in before the track went cold.

“Every time we go out qualifying, I try to go out early to get a lap down because you never know what’s going to happen,” Pierce said. “I know Mark (Boden) will be fast tomorrow, so we will have to see how we shake out in the end.”

After missing her debut race at Road America due to mechanical issues in qualifying, Cindi Lux will share the SGT class front row with Pierce in the No.45 Lux Performance Group/Black Rock Coffee Dodge Viper.

Steve Davison got one flying lap in the No. 22 Davinci Plastic Surgery/Aston Martin Vantage (2:14.966-seconds) before the session ended to claim pole in GT.

“It’s always a learning experience,” said Davison. “I really needed a backup lap put down quickly before the session got shuttered. The last time I was here, I hit the barrier on the way out of the Esses, so I am a little more sensitive on this track this weekend than I have been in the past.”

The Trans Am Series presented by Pirelli TA/SGT/GT classes will take the green for the multi-class 100-mile feature starting at 11:20 a.m. Eastern on Sunday. 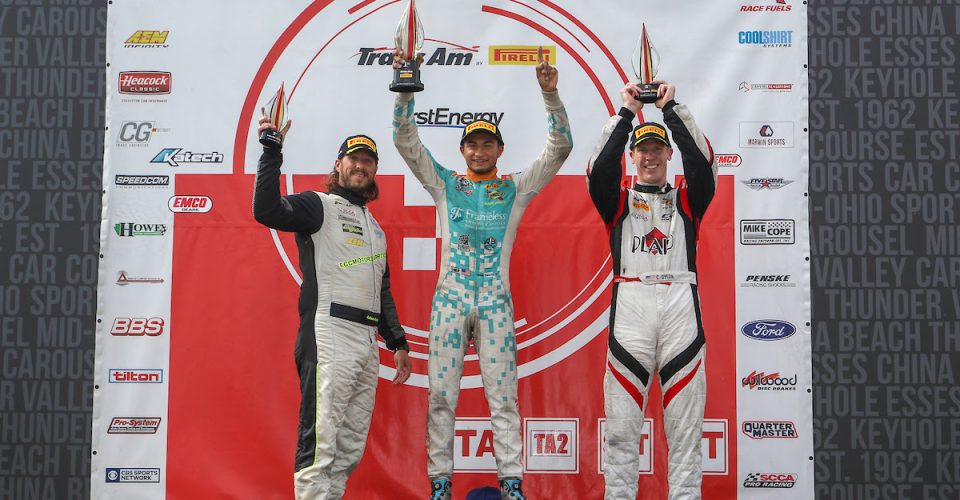 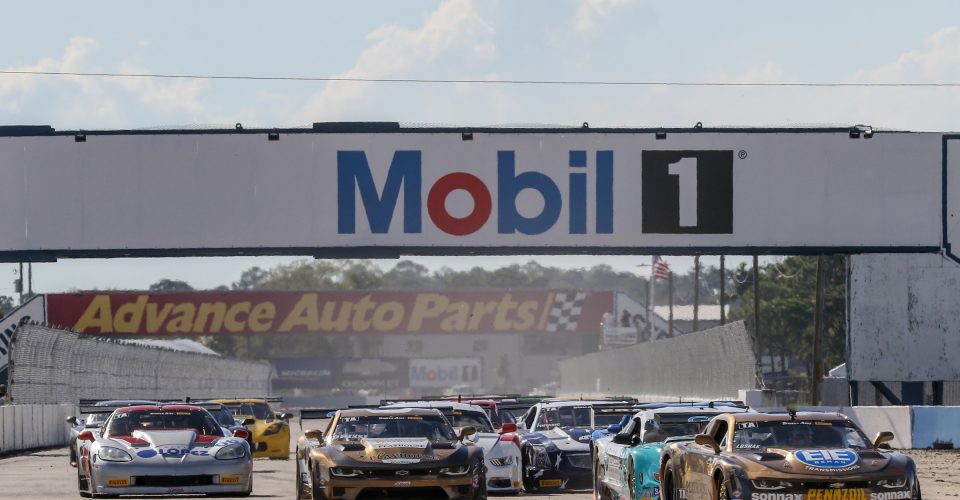 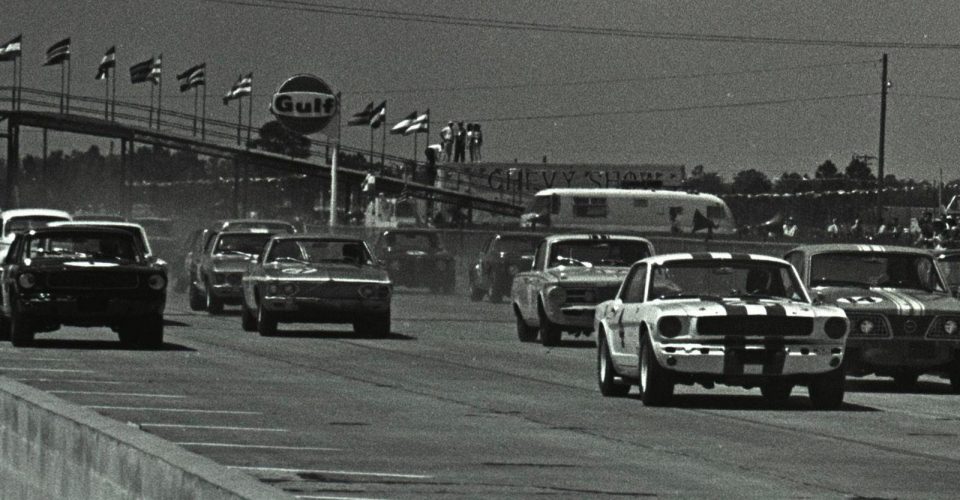 Trans Am Returns to Where It All Started in 1966