Marc Miller Seals Trans Am Championship with a Win at CoTA

Marc Miller Seals Trans Am Championship with a Win at CoTA 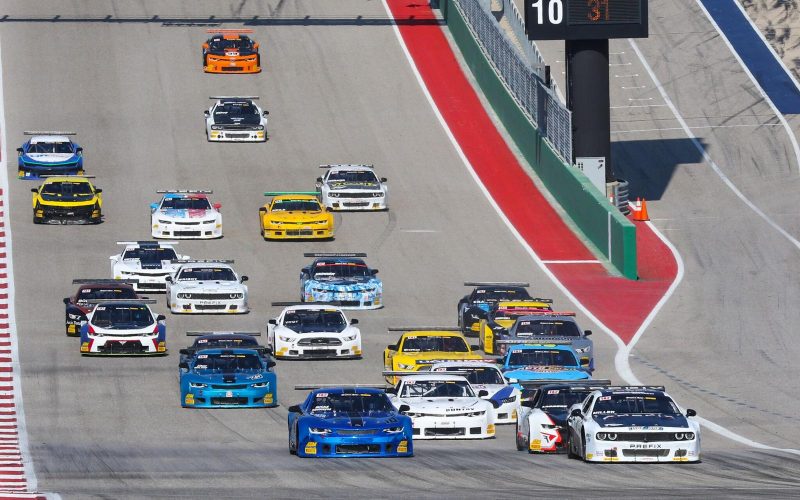 AUSTIN, Texas (6 October 2019)- Even though he only needed to start the race to secure the TA2 powered by AEM championship, Marc Miller took an emphatic Trans Am presented by Pirelli win at Circuit of the Americas on Sunday.

Miller’s No. 40 Prefix/Stevens-Miller Racing Dodge Challenger was fastest in testing, practice, qualifying, and ultimately the 100-mile TA2 feature on Sunday. But as easy as he made it look on the iconic 3.427-mile, 20-turn circuit, the race was by no means an easy one for Miller to win.

Scott Lagasse Jr. (No. 92 SLR/Fields Racing/M1Racecars / Chevrolet Camaro) kept Miller honest for most of the 25 laps, even leading the race at one point.  But Miller pulled it together, clinching his championship in style with his fourth win of the season. 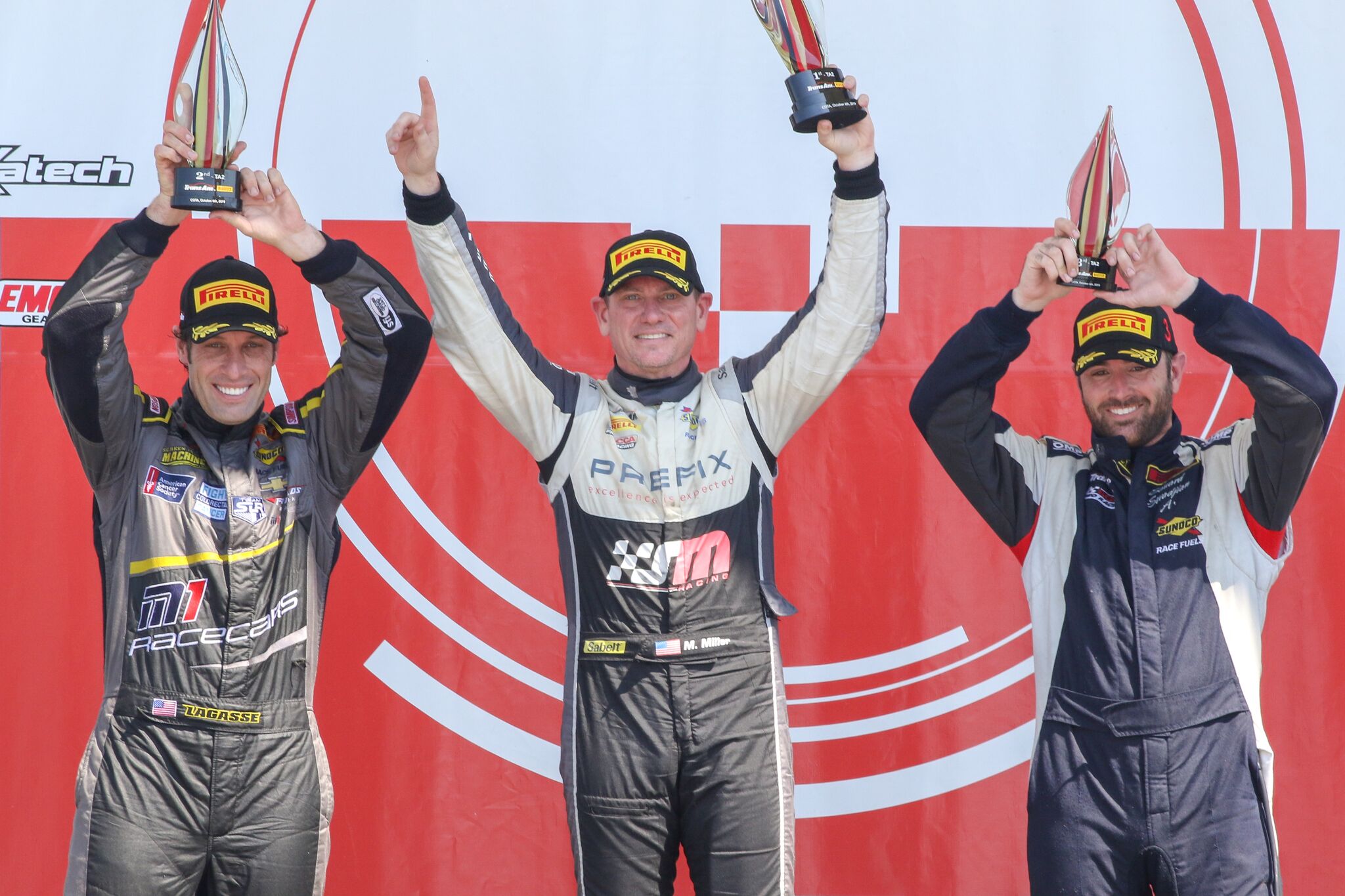 “I loved that race,” said Miller. “Scott (Lagasse Jr) and I raced each other clean, but hard. It was so fun. I wasn’t even thinking about the championship until right now and it feels great. To not only win it for our team but to win for Prefix on their 40th anniversary, how amazing is that?! The day would be perfect if my family were here to celebrate.”

Lagasse Jr. got the jump on the start and went from a fourth-place start to second before entering Turn 1. Miller pulled a six-second gap by Lap 6 but, all of that would change when an extended caution period eliminated his advantage.

Excelling at restarts, Lagasse Jr. whipped to the inside of Miller and took the lead entering into Turn 1. The former NASCAR driver lead for three laps until Miller repaid the favor. Lagasse Jr. was relentless in the pursuit for his first win of the season, glued to the No. 40’s bumper for the remainder of the race, but the clock expired before he could make a successful move for first. Lagasse Jr. settled for second, which satisfied the SLR/Fields Racing driver after suffering a total loss at VIRginia International Raceway just two weeks ago and his past experience at CoTA. 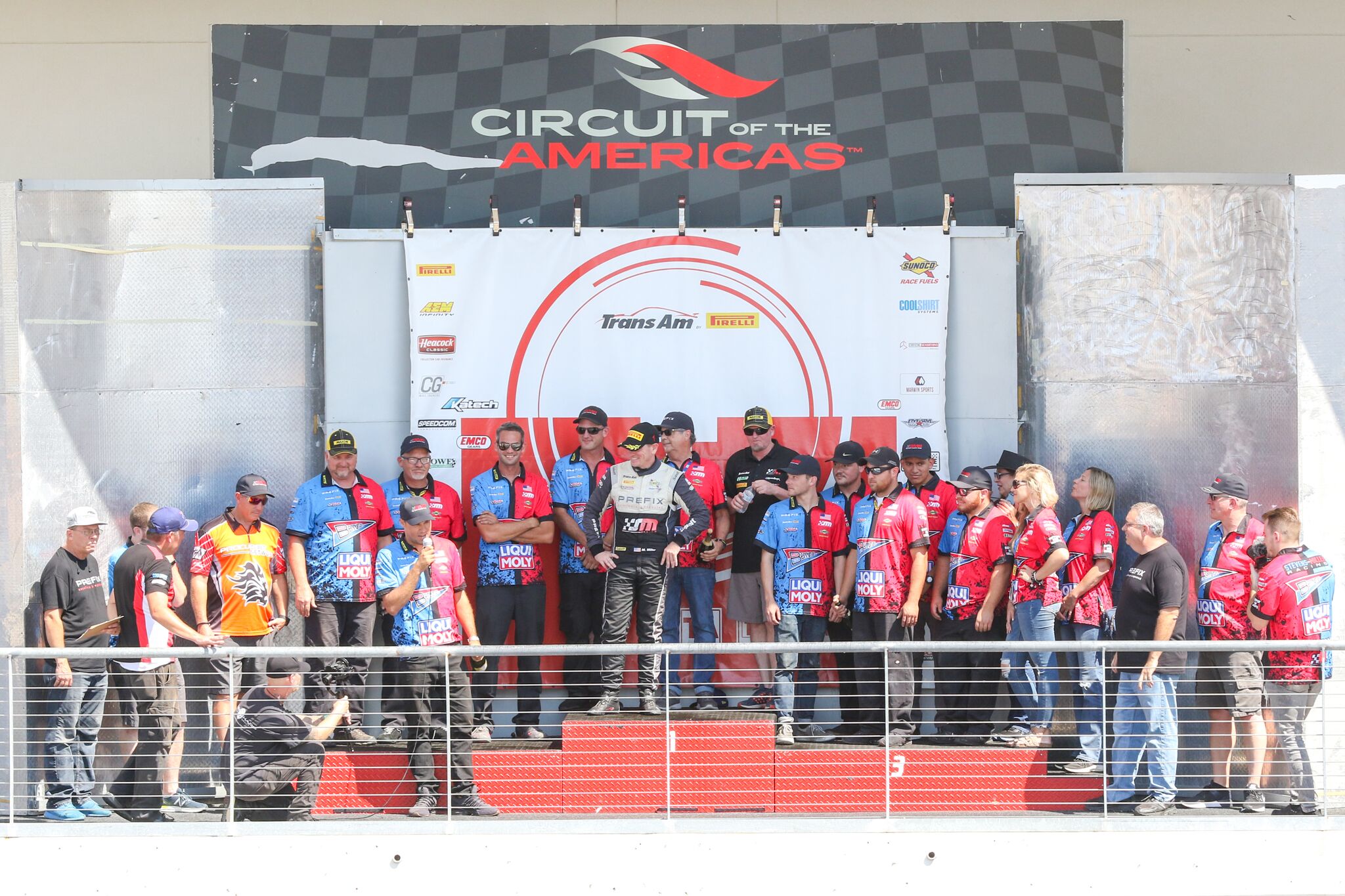 “Marc (Miller) needed to make some mistakes so I could win,” Lagasse Jr. laughed. “SLR/Fields Racing guys really put in the time to get the new car put together for the race. We had terrible luck here last year, not even starting the race, so to go out there and have great battles with Marc (Miller) was the comeback we needed.”

Texas native Sevadjian’s No. 38 Chevrolet Camaro was in pieces last week, but his Leadfoot Racing team finished the build on Tuesday, just in time to load up for race weekend.  Fighting heat and a few teething issues, Sevadjian wheeled his brand new machine to his first TA2 podium finish.

“We felt the Texas heat today,” Sevadjian said following the race. “Being that the car was brand new, we hadn’t run it with a full tank of gas. The weight distribution of the gas changed the handling a bit and it was a battle to finish where we did. Considering the car was just put together this week, we are extremely happy with a podium finish. It’s more than we expected heading into the weekend.” 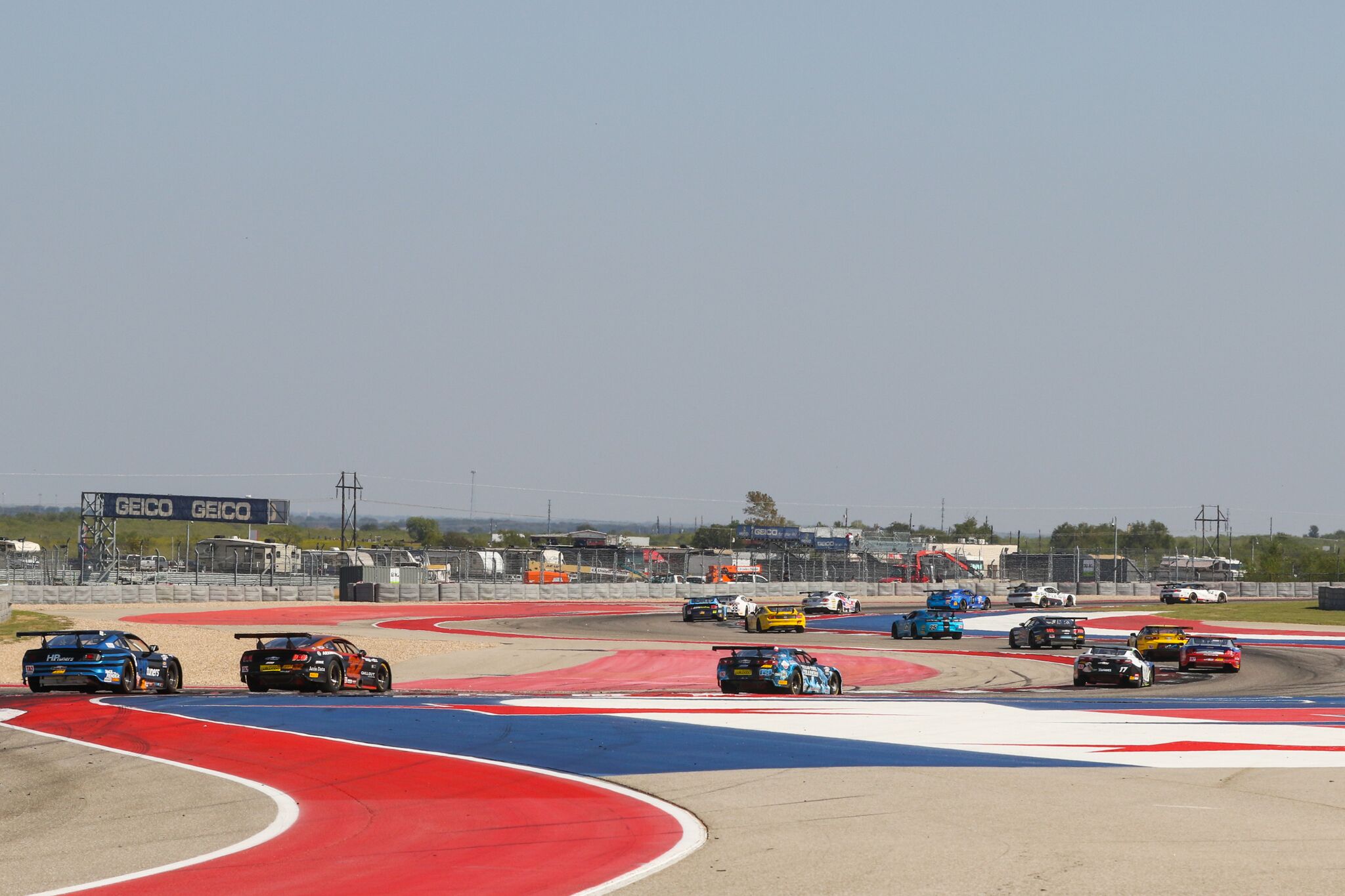 “I chose to start from the back today because I wasn’t feeling well and I didn’t know if I could make it through the whole race,” said Prociuk. “Then adrenalin kicked in, and I felt energized. With how the day started, we couldn’t be happier with the sixth-place finish.”

Brad McAllister (No. 24 www.PortlandImplantDentistry.com Ford Mustang) locked up the Trans Am Series presented by Pirelli West Coast Championship by three points with his win over Anthony Honeywell Sunday at CoTA. McAllister entered the weekend trailing Honeywell by two points. Nabbing an extra two points for qualifying second, McAllister needed a race win to secure the championship. 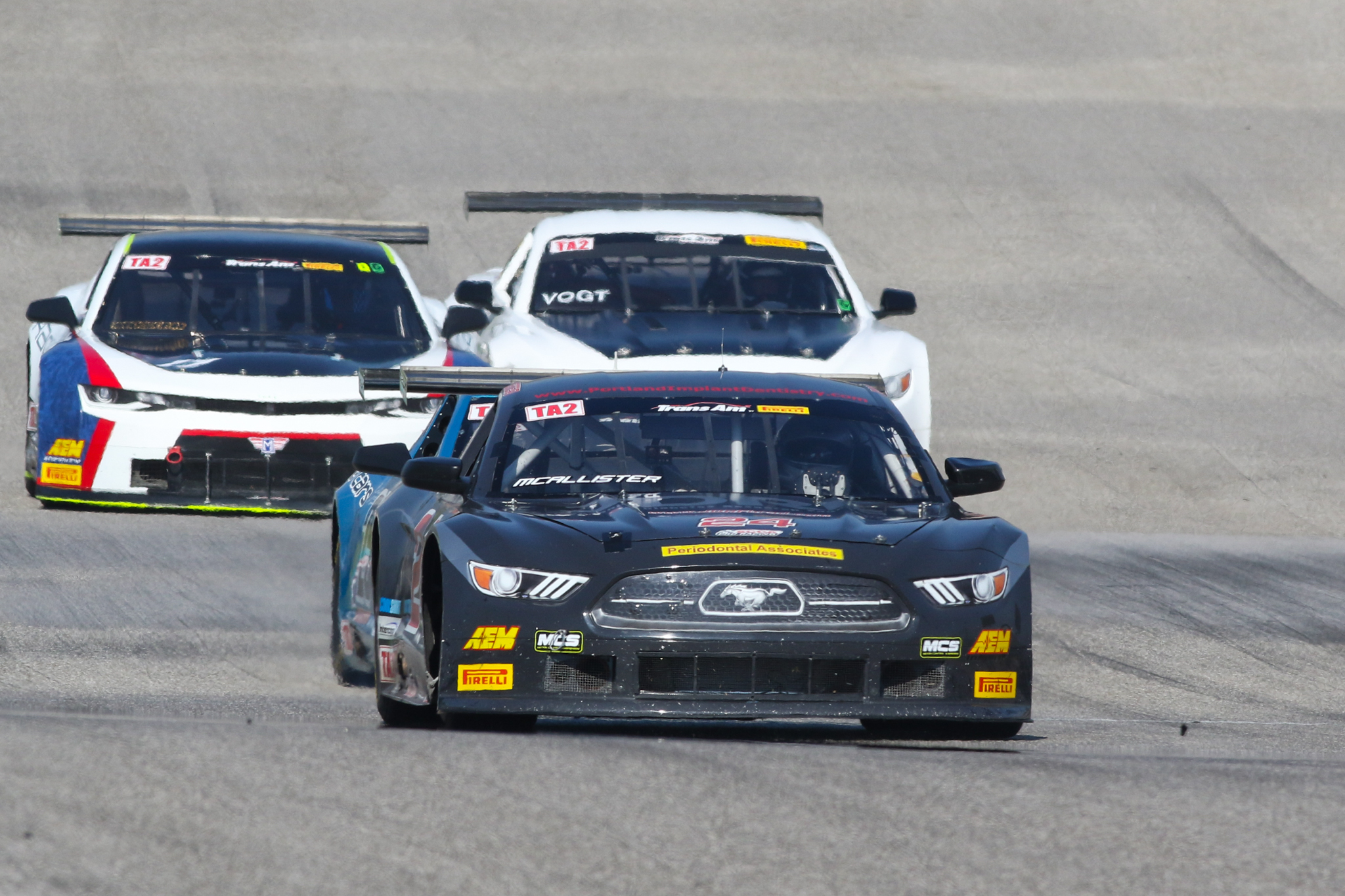 Ethan Wilson, in the No. 25 BC Race Cars/Western Grinding Services Chevrolet Camaro, lead for the majority of the race, and McAllister’s chances of clinching the championship looked bleak until Wilson experienced mechanical issues that forced him to retire the race early.

Wilson’s misfortune lead to McAllister’s gain as he crossed the finish line first for the West Coast bunch, earning his first Trans Am championship.

“I am really proud of all the West Coast guys, we came here and matched up with the National guys with three of us finishing in the top-10,” said McAllister. “I’ve been racing in the West Coast Championship since its inception in 2017. It’s great that Trans Am introduced the series out west because it allows guys like me to race in a professional series at an affordable cost. I look forward to coming back next season to defend my title.”

Honeywell finished second on the day, missing out on championship glory by three points. Matthew Butson (No. 19 Butson Racing Chevrolet Camaro) rounded out the podium in third.

The National Trans Am Championship heads to Daytona International Speedway Nov. 14-16 for its season-end finale.

Ragginger, Drissi Give Burtin Another Trans Am 1-2 at Road Atlanta