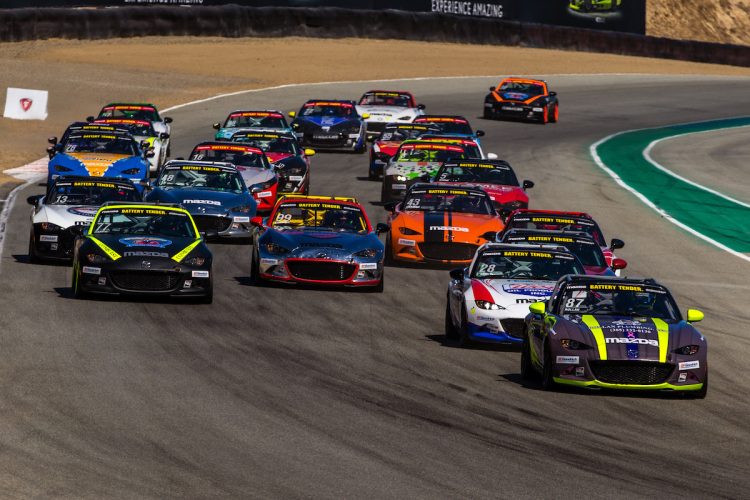 Irvine, Calif. (24 October 2019)- Breaking new records as drivers fought for the significant support on offer from Mazda and Battery Tender ®, the 2019 Battery Tender® Global Mazda MX-5 Cup presented by BFGoodrich Tires® season was one for the record books.

With an astounding 2,665 on-track passes completed through the season, the vision of taking a production-based Mazda MX-5 Cup car to the track produced incredible competition and close on-track battles through the field. How close? The average winning margin of victory was less than one second (0.903-seconds) through 24 races in 2018 and 2019.

The 2019 season also saw an increased average grid size of 28 Global Mazda MX-5 Cup machines with 39 drivers scoring points throughout the season, and of those, 21 scored points in every race. The close championship points battle rose to a fever pitch ahead of the season finale, which saw six drivers entering the weekend with a mathematical shot at the championship. 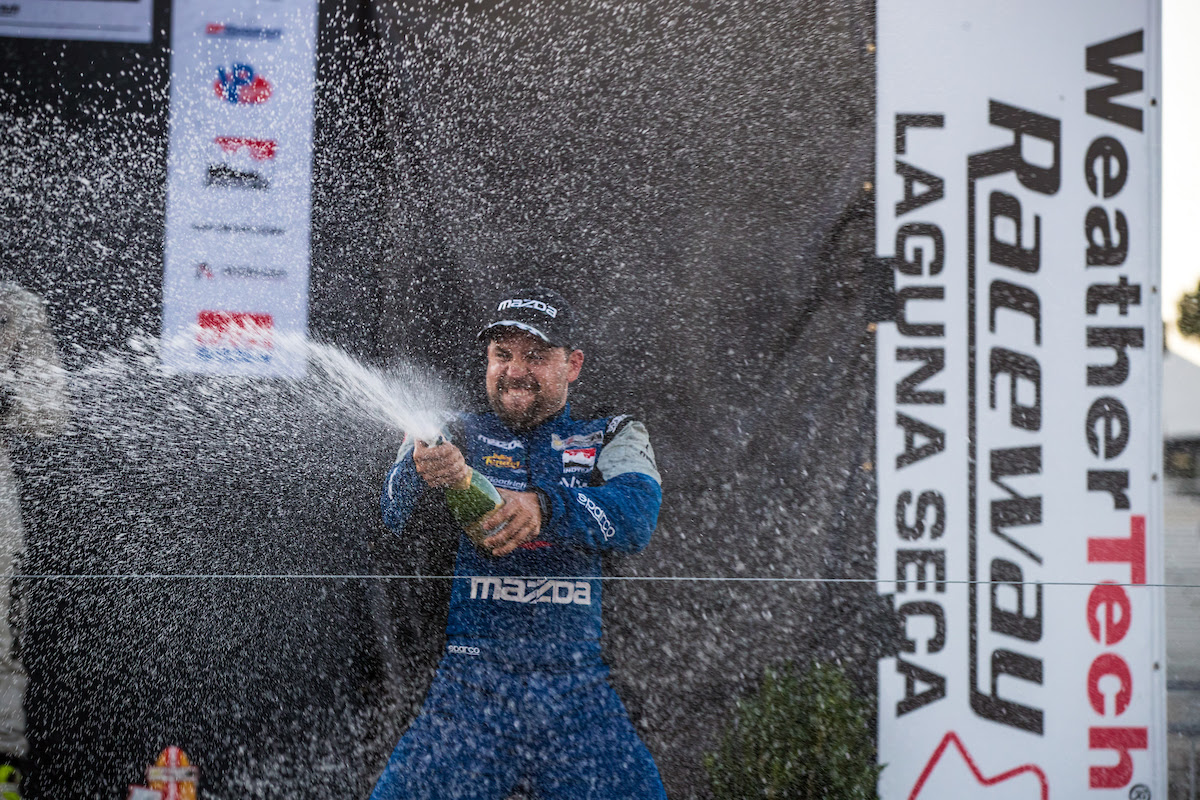 The $200,000 Mazda Scholarship went to Bryan Ortiz. From San Juan, Puerto Rico, Ortiz became the first Puerto Rican driver to win an international racing championship when he captured the Global Mazda MX-5 Cup championship at WeatherTech Raceway Laguna Seca. Utilizing the $200,000 career advancement scholarship awarded to the season champion, Ortiz was announced as the first driver of the new Mazda3 TCR in the IMSA Michelin Pilot Challenge for the 2020 season.

The remarkable amount of passing and close competition was also underscored by the fact that nine different drivers emerged with the Battery Tender® Hard Charger Award, which provides $1,000 to the driver as well as $1,000 to the crew chief of the car that makes up the most positions in each race.
Finishing fourth on the season to cap off his Rookie of the Year title was Michael Carter, who netted $75,000 in support from Mazda for that accomplishment.

After a nearly perfect season, John Dean II clinched the 2019 ND1 championship early, and with it $100,000 in support from Mazda to continue his racing career in 2020. Winning 11 of 12 races this year, Dean II became the first person in history to win two championship titles in the Battery Tender® Global Mazda MX-5 Cup Series Presented by BFGoodrich Tires® after having claimed the 2015 title. 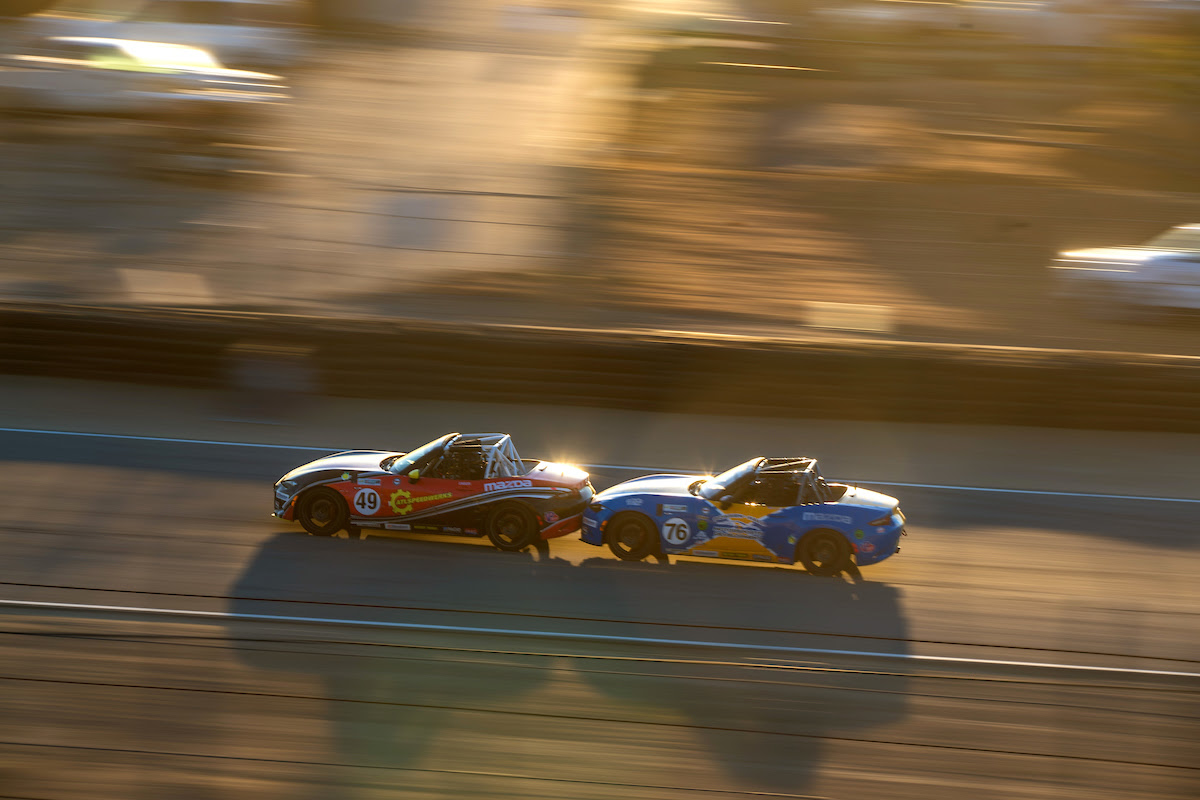 The secret to this level of competition started with a field of hungry racers, a focus on parity and consistent rules that delivered competitive, low-cost racing. In 2019, MX-5 Cup featured a new two-class (ND1 and ND2) structure with the series delivering both value and record setting speed as the parity continued throughout the season.

Circuit of The Americas 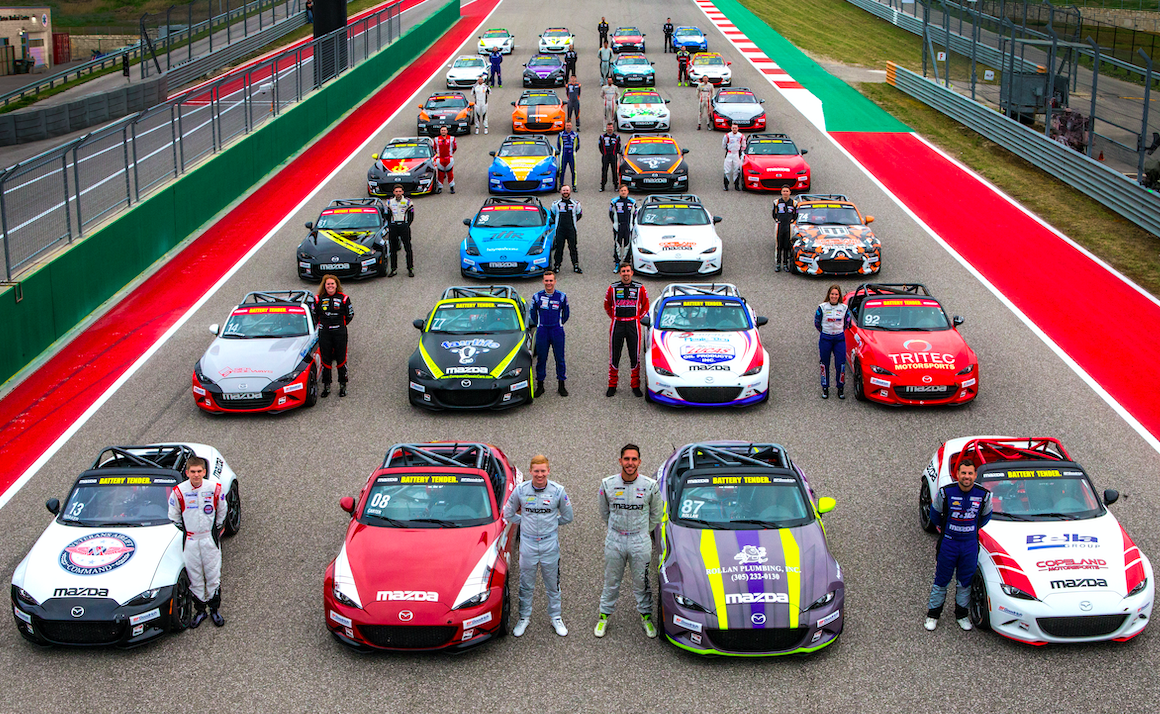 The 2019 championship opened in a big way at Circuit of the Americas, showcasing the smallest margin of victory and widest winning margin of victory all in the same weekend. In the opening round, the Mazda MX-5 Cup drivers delivered more than 220 passes leading to an incredibly slim 0.0664-second margin of victory for Drake Kemper (Sick Sideways Racing) over Bryan Ortiz (Copeland Motorsports) as the top-five finishers all crossed the line within a half second of the race winner.

Round Two of the Battery Tender® Global Mazda MX-5 Cup presented by BFGoodrich Tires® looked to be on track for another photo finish until Selin Rollan broke away from the field to score a dominant victory at Circuit of the Americas with the widest winning margin of victory of the entire season, crossing the stripe 5.1882-seconds ahead of Ortiz.

John Dean II in the ND1 class took sweeping victories in both races, kicking off his five-race winning streak.

Rollan (No. 87 Sick Sideways) claimed his second consecutive Global Mazda MX-5 Cup victory in the opening Barber round, crossing the Barber Motorsports Park finish line with a slim 0.3333-second advantage over Ortiz (No. 4 Copeland Motorsports).  The 2019 Mazda Road to 24 Scholarship winner Michael Carter made his first-ever Global Mazda MX-5 Cup podium appearance with his run to third place as the top four finishers were within one second of Rollan at the end of the 45-minute race. 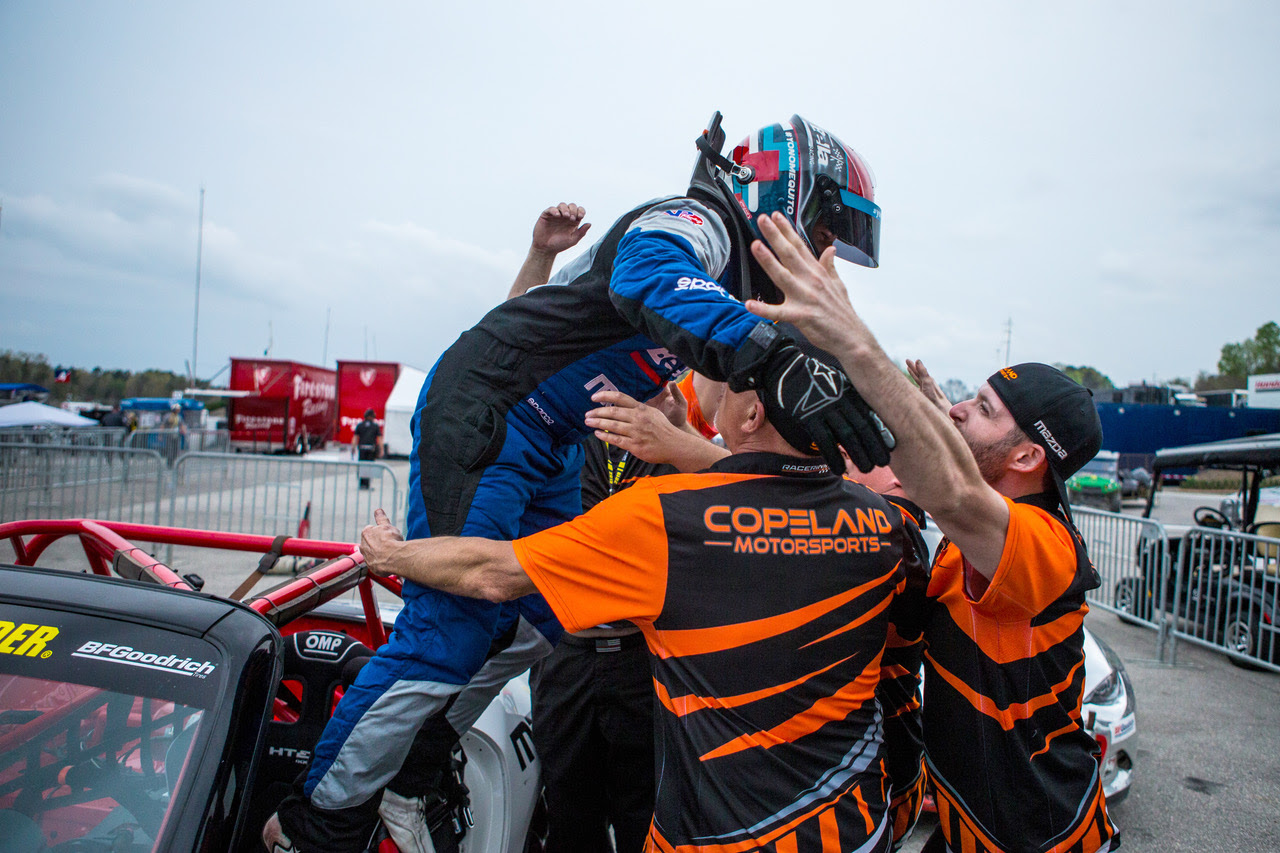 After taking a frustrated second-place finish in Race One, Ortiz relished his run to the podium in Race Two—his first victory of the 2019 season. Polesitter Gresham Wagner (No. 5 Sick Sideways Racing) held the lead for the opening nine laps before Race One winner Rollan took over. But just four laps later, a determined Ortiz moved to the front and never looked back.

Dean II continued his perfect record in the ND-1 class, winning by 1.245 seconds over teammate Nathanial Sparks (No. 8 Sick Sideways Racing). The duo spent most of the race trading positions with Hernan Palermo (No. 20 Slipstream Performance) who finished third.

Road America was anticipated to be a drafting battle, and with hundreds of on track passes made, it didn’t disappoint.

The event was named in honor of Alana Long, a cherished member of the Mazda Racing family who lost her battle with cancer after a long fight. Long was an ardent supporter of Lemons of Love (http://lemonsoflove.org), which provides Chemo Care Packages for patients in treatment.

Robert Noaker (Robert Noaker Racing) scored a victory at Road America on the final lap of the first race. The 15-year-old showed poise, taking his second win of the season in a thrilling run to the checkered flag.

The second half of the Alana Long 100 at Road America was another action-packed race filled with overtakes with Rollan taking his second victory of the season ahead of Kemper (No. 99 Sick Sideways Racing) with Robert Stout (No. 28 McCumbee McAleer Racing) taking third.

Dean’s ND1 winning streak ended at Road America with a photo finish that saw him finish a mere 0.0127-seconds behind Hernan Palermo (No. 20 Slipstream Performance).

Noaker’s very first Mazda MX-5 win came at Mid-Ohio Sports Car Course in 2018. A year later, he was on the top step of the podium again after a race-long fight with Stout. 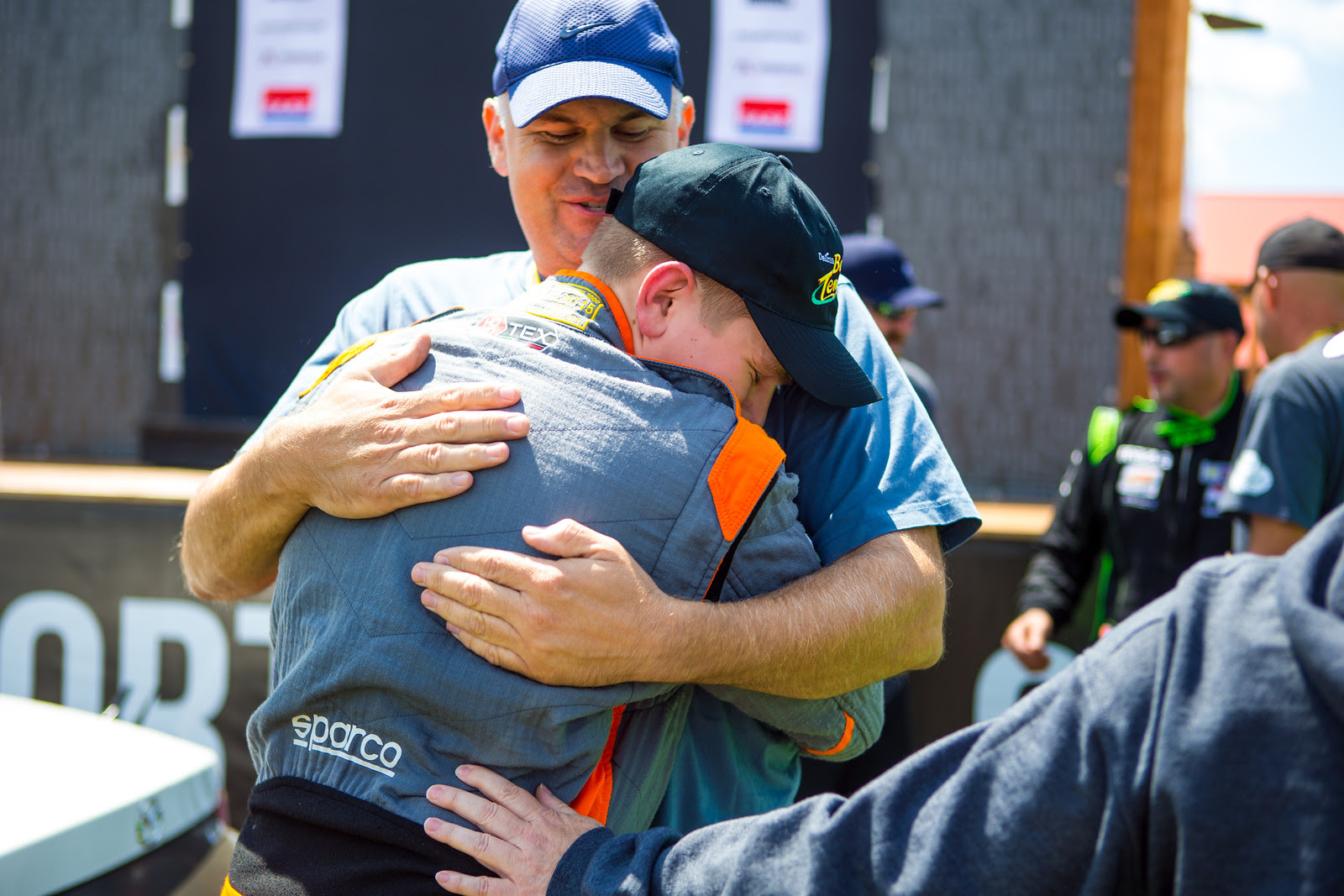 Noaker’s 2018 win at Mid-Ohio earned him a spot in the Guinness Book of World Records for being the youngest driver to win an INDYCAR-sanctioned race (14 years, 178 days old). The youngster, who also won at Road America earlier this season, showed his 2018 Mid-Ohio win was no fluke, leading 27 of 28 laps in Round Seven of the Battery Tender® Global Mazda MX-5 Cup.

Starting second in the No. 13 Robert Noaker Racing MX-5, the (now) 15-year-old read the green flag perfectly and was in the lead by the first turn.

Stout claimed victory with a last lap pass on Noaker to win the Mid-Ohio finale. The 45-minute race showcased the very best of MX-5 Cup racing, including zero safety car periods, 267 passes for position and five lead changes at the line. With the top 14 cars running nose-to-tail for the first 30 minutes, it seemed anyone could win. 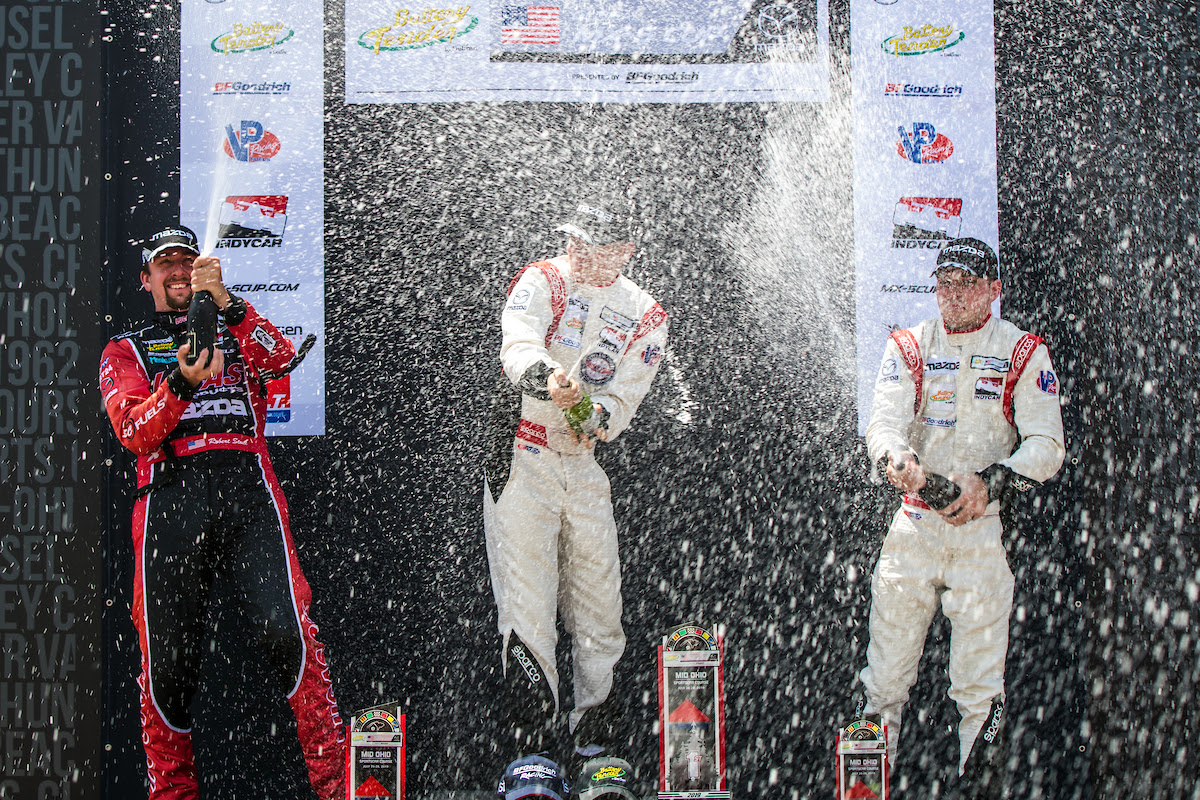 Patient at the start but aggressive when he needed to be, Ortiz drove a flawless race to score his fourth win of the season at Portland International Raceway.  Rollan added fuel to his championship hopes with a win in Race Two.

Sarah Montgomery (No. 20 Sick Sideways Racing) made series history as the first female to score a podium finish in the series history with her run to third on the ND1 class podium. She followed up that success with another podium visit in Race Two.

But it was Dean II who once again completed a Portland sweep in the ND1 class with his second win of the weekend. The victory moved Dean II to an 80-point advantage, a margin that secured the ND1 class championship and earned Dean II $100,000 in support from Mazda.

As the championship entered its final stages for a doubleheader weekend at WeatherTech Raceway Laguna Seca, six drivers had a mathematical chance to claim the championship and the $200,000 prize on offer from Mazda.

Stout was keenly aware of what needed to happen at Laguna Seca for him to earn the title; he needed to win and his rivals needed to falter. Both conditions were achieved in Race One.

Everything was flipped on its head on the second lap when Rollan, who was running second, slowed to a stop with a broken gearbox. He was officially scored in 25th and earned last-place points.

Stout took the lead from Rollan on the opening lap and commenced a long battle with Luke Oxner (White Racing) for the lead.

The two exchanged the lead several times before Stout took the lead for good with 16 minutes to go in his No. 28 McCumbee McAleer Racing MX-5, scoring a 0.9854-second margin of victory.

Dean II continued his ND1 class domination with his 10th and 11th wins of the season, part of a podium sweep for Sick Sideways Racing.

As the signature series for the Mazda Road to 24, the Global Mazda MX-5 Cup is an established proving ground for young up-and-coming talent to develop their skills as they advance their motorsport career. The 2020 season looks just as promising as this season, with all 12 races supporting IndyCar. The official season kicks off in December with a Series Test at Sebring International Raceway Dec. 11-12.