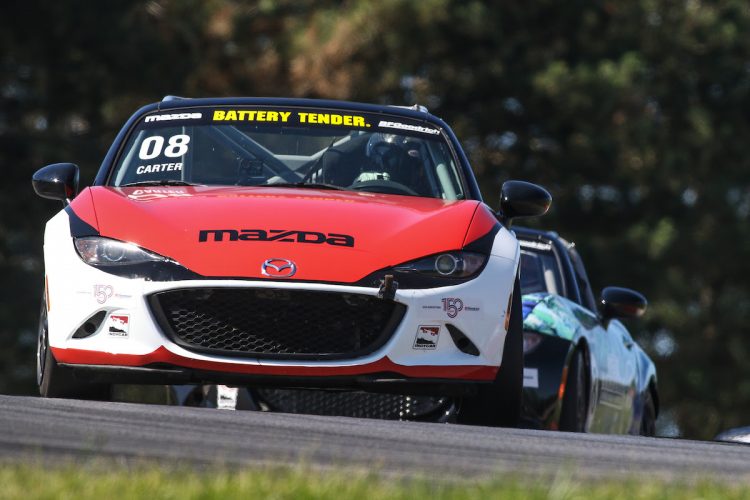 LEXINGTON, Ohio (Sept. 12, 2020) – After a heartbreaking doubleheader at Indianapolis Motor Speedway last week, Gresham Wagner (No. 5 Spark Performance) proved he was meant to be at the front of the Global Mazda MX-5 Cup presented by BFGoodrich® Tires field on Saturday. Wagner lead every lap in Round Five at Mid-Ohio Sports Car Course to take the win, followed by Michael Carter (No. 08 Carter Racing Enterprises) and Robert Noaker (No. 13 Copeland Motorsports).

Starting from pole, Wagner sped away from the field at the start of the 50-minute race and never looked back. Leading every lap of a Global Mazda MX-5 Cup race is nearly unheard of in the highly-competitive spec series, but that’s exactly what Wagner did en route to a 1.1799-second margin of victory.

“It looked easier than it was being a 29-lap race with no mistakes,” Wagner said. “Even at the end I had a gap, but it was smaller than I would be comfortable with. The first half of the race, I was trying to work at pulling away. I had to keep pushing the last couple laps, but it was easier not having to defend as hard going to the white and checkered flag. The car was great. It held on to the end. With not making any mistakes, it was a good showing for us.”

Though he was provisionally scored the winner in Round Three at IMS, a trip through post-race technical inspection for Wagner showed he was five pounds underweight and therefore disqualified. Wagner can now officially celebrate his first MX-5 Cup win, in dominating fashion, at Mid-Ohio.

Carter was able to challenge Wagner at times but admitted that a couple mistakes cost him an opportunity to make a real passing attempt.

“My plan for this race was to stay in line for the first half,” Carter said. “The last 20 minutes were difficult. I made a few mistakes and Gresham (Wagner) was driving so well today. When he pulled away, all I could do was maintain my position. It was a good race and we are taking a second-place finish but that is the first loser. I am looking forward to seeing what the afternoon holds.”

Carter did set the fastest lap of the race and new race lap record of 1:36.300-seconds, so if he runs mistake-free in Round Six, Wagner could have his work cut out for him.

Championship points leader Noaker completed the podium in his entry. He battled with Sellin Rollan (No. 87 Spark Performance) for much of the race to claim third. Sometimes the battle was a little too intense: at one point a move by Noaker sent Rollan into the grass and race control ordered him to give the spot back. Even after yielding the position, however, Noaker was able to re-take third and keep it to the checkered flag.

“The battle between Selin (Rollan) and I wasn’t as clean as I wanted it to be,” Noaker said. “It was a hard-fought race, bumping doors where we shouldn’t have been. There only are three good passing corners, so you have to make the most of the different opportunities.”

Rollan did his best to hold Noaker at bay, but ultimately crossed the finish line a mere 0.2312-second behind.

Robert Stout, a winner at Mid-Ohio last year, completed the top five in his No. 3 White Racing machine.

There may not have been a lot of passes happening up front, but mid-pack there was plenty, and a lot of it was being done by Justin Piscitell (No. 9 Maverick). He earned the Hard Charger Award for making up six positions in the race.

“The Maverick crew did an awesome job with the car this weekend,” Piscitell said. “We were forced to use the backup car, so they had a lot of work to do to give me the best car. The hard work paid off – the car handled phenomenally. We capitalized where we could and utilized drafting to move up a couple positions. The car held strong and our BFGoodrich tires were great. We have another race this afternoon but starting from a similar starting position, so hopefully we will be able to move up even more.”

Round Six of the Global Mazda MX-5 Cup will take place later today at 3pm ET. Live timing and track feed will be available at https://www.mx-5cup.com/results/live-timing.