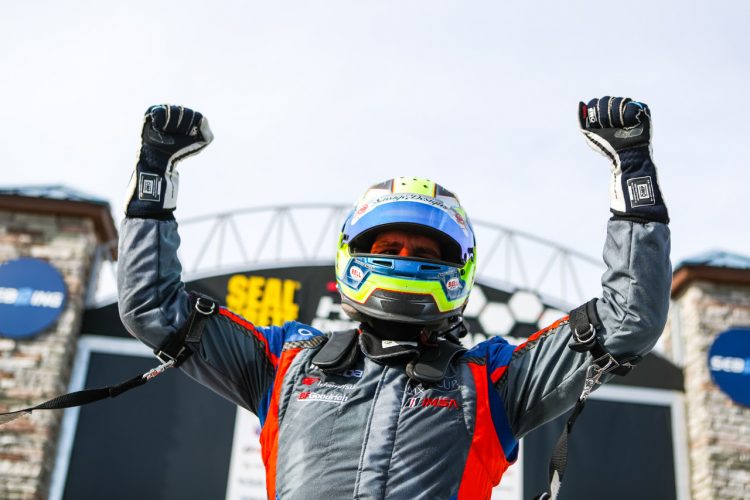 The 0.001-second margin of victory is the second-closest finish in series history

SEBRING, Fla. (March 18, 2021) – The Idemitsu Mazda MX-5 Cup presented by BFGoodrich® Tires put on another jaw-dropping show for its Round Three race on Thursday at Sebring International Raceway. The top three drivers, who ran nose-to-tail for the entire 45-minute race, crossed the finish line three-wide in a textbook photo finish.

Polesitter Gresham Wagner (No. 5 Spark Performance) led a three-car train that included Selin Rollan (No. 87 Hixon Motor Sports) and Michael Carter (No. 08 Carter Racing Enterprises) for most of the race. Wagner and Rollan traded spots in the early laps, but Wagner eventually took control of the lead.

The lead trio lost their advantage on the rest of the field when a full-course yellow came out for a crash in Turn One. Luca Mars (No. 41 Copeland Motorsports) went wide on the exit of the corner then made contact with Jenson Altzman (No. 13 McCumbee McAleer Racing). 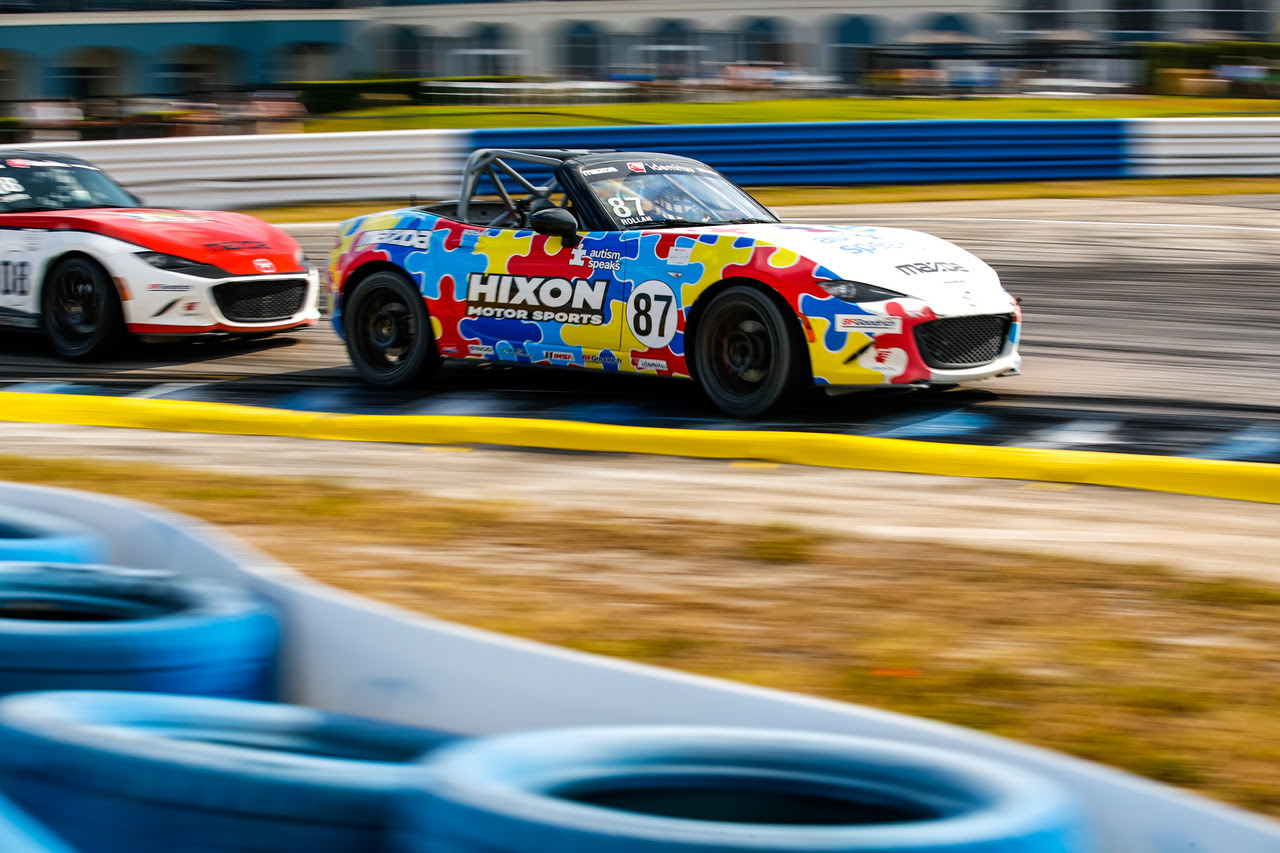 The field followed the safety car around the circuit for 12 minutes while the two cars were cleared from Turn One.

When the green came back out, the lead trio resumed their three-car breakaway, but were a bit scrappier and Carter took his turn at the front.

“We were fortunate enough to get a breakaway,” Carter said. “And, you know, that’s how I like to race these races. Get out front in a smaller group and then duke it out for the finish. Fortunately, we were able to do that early in the race and then again after the restart.”

On the final lap, Carter, Wagner and Rollan were pushing each other hard for the top spot. The order had already changed three times as the pack exited the final turn for one last drag race. A fourth and final lead change came as the three cars crossed the finish line door-to-door. The timing screens showed Rollan as the winner by 0.001-second over Carter, making it the second closest finish in Mazda MX-5 Cup history. 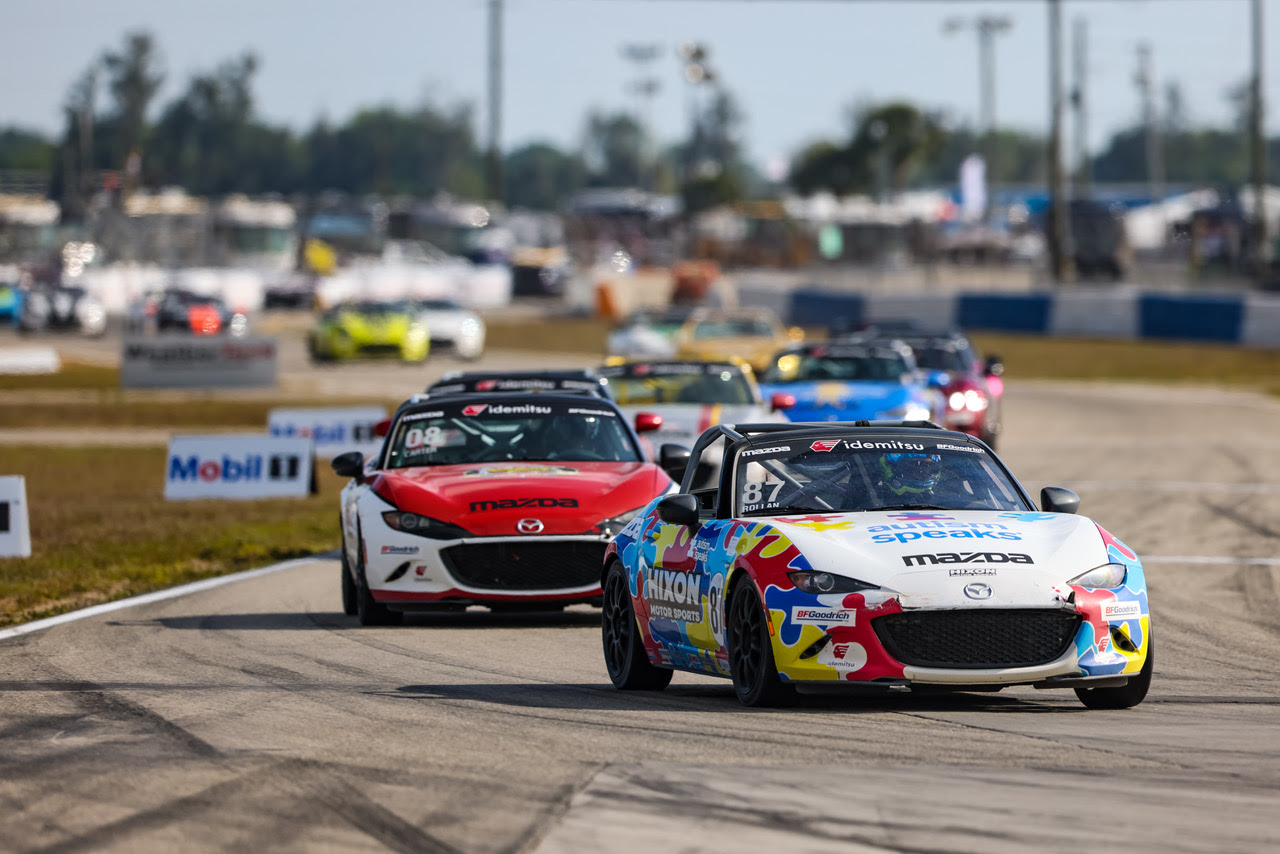 “To start things off, I had no radio,” Rollan said. “We [Michael Carter and Gresham Wagner] made a gap and we were all on board to make a gap and then we got the double yellow. I thought it was all going to be over and that it was going to be a crazy race to the finish. But luckily, we were able to bring that gap back after the restart.

“Once the white flag came out we were racing hard and I was able to get by Gresham (Wagner). I got by (Michael) Carter on the back straightaway. We all went deep into (Turn) 17 and I got a run on Gresham. Then, passing the start finish line I had no idea that Michael was even there or that we even won the race. So I went through that whole cool down lap not knowing where we finished. Thanks to Hixon Motorsports for putting me in this car this year. We worked hard at it, and it wasn’t the best the whole week, but it was the best it’s been during the race. I’m excited for the team and ready to get racing tomorrow.”

Carter was the leader as the pack exited Turn One on the final lap, but a mistake in Turn Seven cost him. 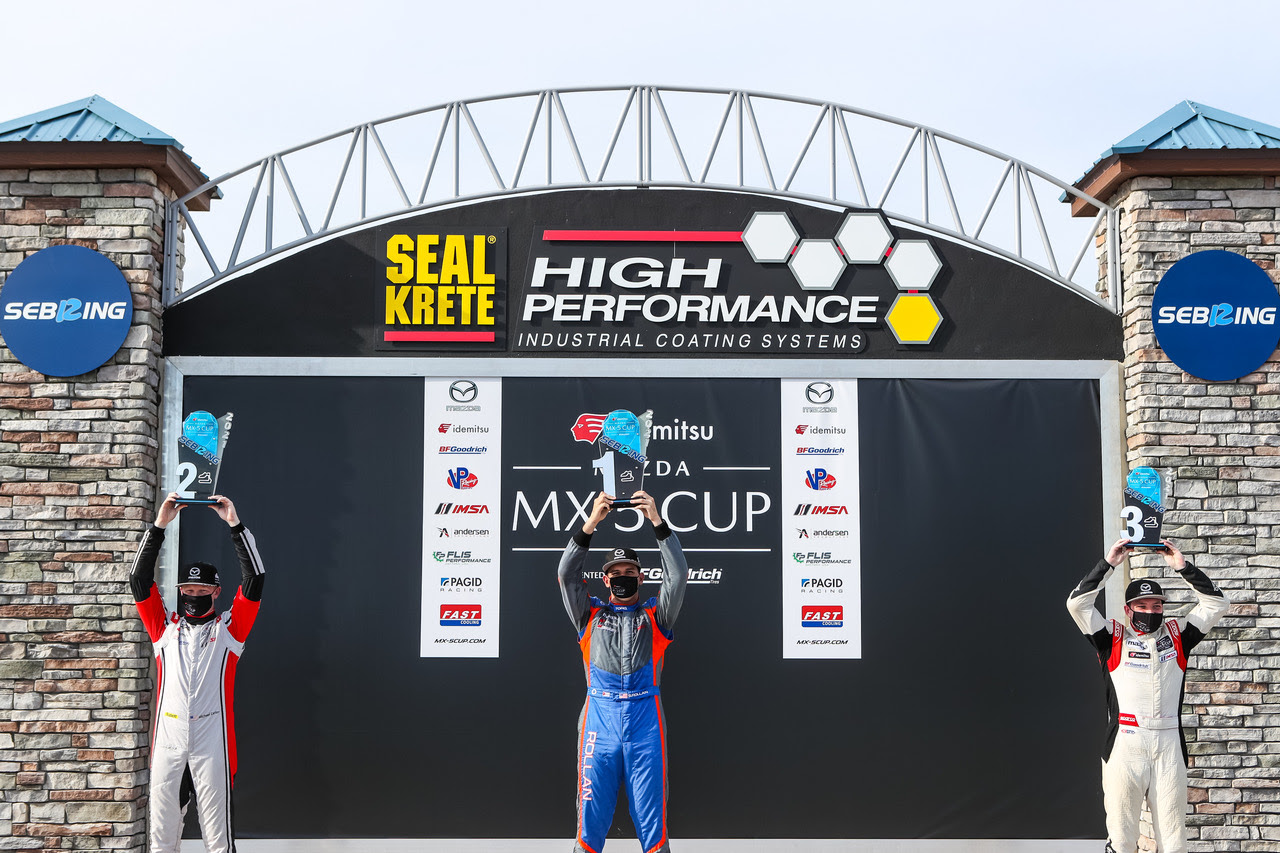 “Selin and Gresham, tried to race each other into 17 on the white flag lap,” Carter said. “I was in the lead and I made a mistake in the hotel turn, so coming down the back straightaway to 17, I kind of thought, well maybe they’ll out-brake each other. So I didn’t lift or anything, but they had a run there to the finish. No one blocked, and I was able to cross over them, but I was one spot short at the end.

“But that was a lot of fun, you know. I was glad, we were three-wide across the finish line clean and we don’t have much work to do for tomorrow, so it should be a good one. It was a really good race.”

Wagner lead the most laps of the race and will score 10 bonus points as a result, but he drew the short stick when it came to the finish.

“It’s a tradeoff to run in the lead; you have the clean air, but you have to run hard and keep the pace up at the front,” Wagner said. “So my water temp was down and my tire temp was up I guess. I like to lead, generally, if I can. The guys behind me were having to pull out of line at every straightaway to get clean air while I could just run my laps.

“I made a mistake going into Turn One which gave up the lead. I wasn’t too worried once I regrouped because I knew that the draft is so important here. I knew they were going to drive in pretty hard going into the last corner, so I just waited for them to push out a little bit. I cut under, and took the lead for a second there, but Turn 17 is a basically a triple apex corner so they did the over under and had a little bit more momentum coming to the line. I wasn’t sure if I got second or third, but it was a good race regardless.”

Rollan is the third different winner of the season so far. The two racers that flanked him on the podium were each winners at Daytona.

Justin Piscitell (No. 89 McCumbee McAleer Racing) led the second pack of cars across the line in fourth ahead of Drake Kemper (No. 99 Provision Motorsports) and Aaron Jeansonne (No. 24 Provision Motorsports). Before the full-course caution, this was the battle to watch when the lead pack was playing it conservative, and they didn’t let up until the checkered flag. 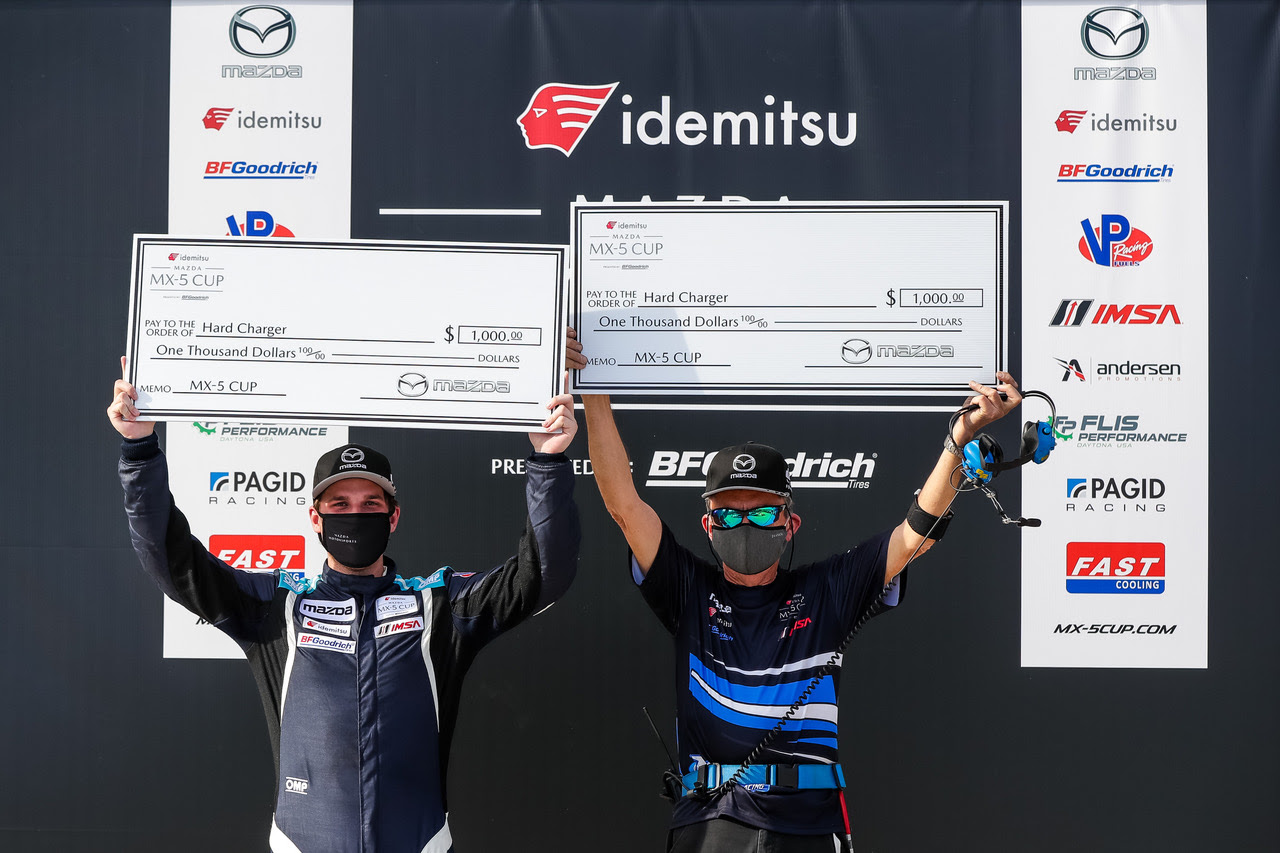 Rookie John Jodoin (No. 31 McCumbee McAleer Racing) earned the Hard Charger Award for advancing 14 positions in the race, from 24th on the grid to 10th at the finish. He and his crew chief each received $1,000 from Mazda for the impressive feat.

Two spots behind him was Chris Nunes (No. 32 JTR Engineering) who had a rough restart from yellow, making slight contact with the Turn One tires. Despite this, Nunes managed to turn the fastest lap of the race on the second-to-last lap, a 2:27.322.

Sam Paley (No. 28 McCumbee McAleer Racing), who finished seventh in Thursday’s race, will start from the pole in Friday’s Round Four race. He’ll share the front row with Piscitell.

Friday’s race is set to start at 9:00am ET and will be streamed live on IMSA.com.