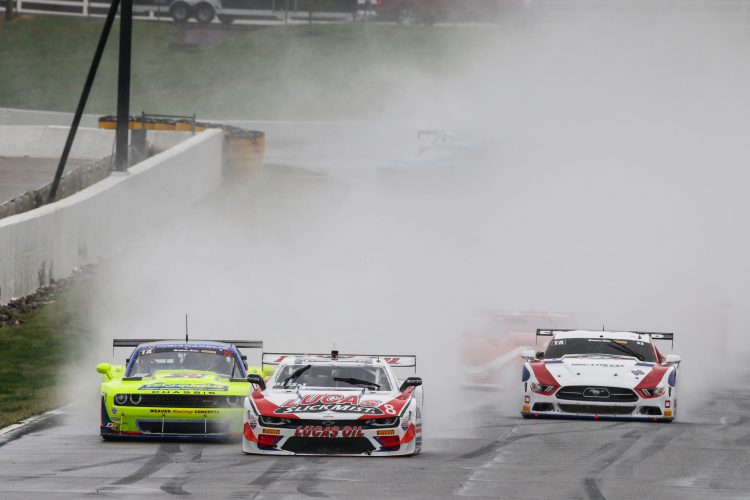 A deluge soaked the 2.54-mile circuit 30 minutes before the start. Francis took the lead on the ninth of 40 laps in the No. 98 Future Star Racing/ Breathless Pro Racing Ford Mustang, with the 23-year-old seven-time champion building up a seven-second lead despite the treacherous conditions.

Undaunted, Said fought back in the No. 2 Weaver Racing Technologies/SRI Dodge Challenger. The rain let off and the track began drying at the midway point, with Said gradually cutting into the lead. Said caught Francis on lap 27, and then bided his time before making his move on the 34th circuit.

“The race was a lot of fun in the rain, I love the rain,” commented Said, who recorded his 18th career Trans Am victory. “Ernie went by me quickly, in the beginning, he had a lot of speed. I was being careful because we can’t afford to wreck. It’s really fast here. I learned a little bit in the first half and then I started to catch up to him. By the end, I was flying. It was a riot flying around like that, it’s more fun than you could ever have.”

Francis has now finished second in both 2021 races to take the lead in the championship. His early pass of Said earned him the Chill Out Move of the Race Award.

“The track started to dry out and we just ran out of rear traction,” Francis said. “It was really good in the wet but once it started drying out, we just didn’t have anything for him (Said). I did the best we could. It’s good points, and we will just go on to the next one.

“It’s been tiring!” Francis Jr. about the multi-formula weekend, which will have him drive in a second race in FR later on Sunday. “A lot of driving between Trans Am and the FR car. A lot of new stuff for me to be in the FR car, it is a totally different driving style. It’s interesting to make the switch back and forth, but it is a fun one. The cars make similar lap times, but in completely different ways.” 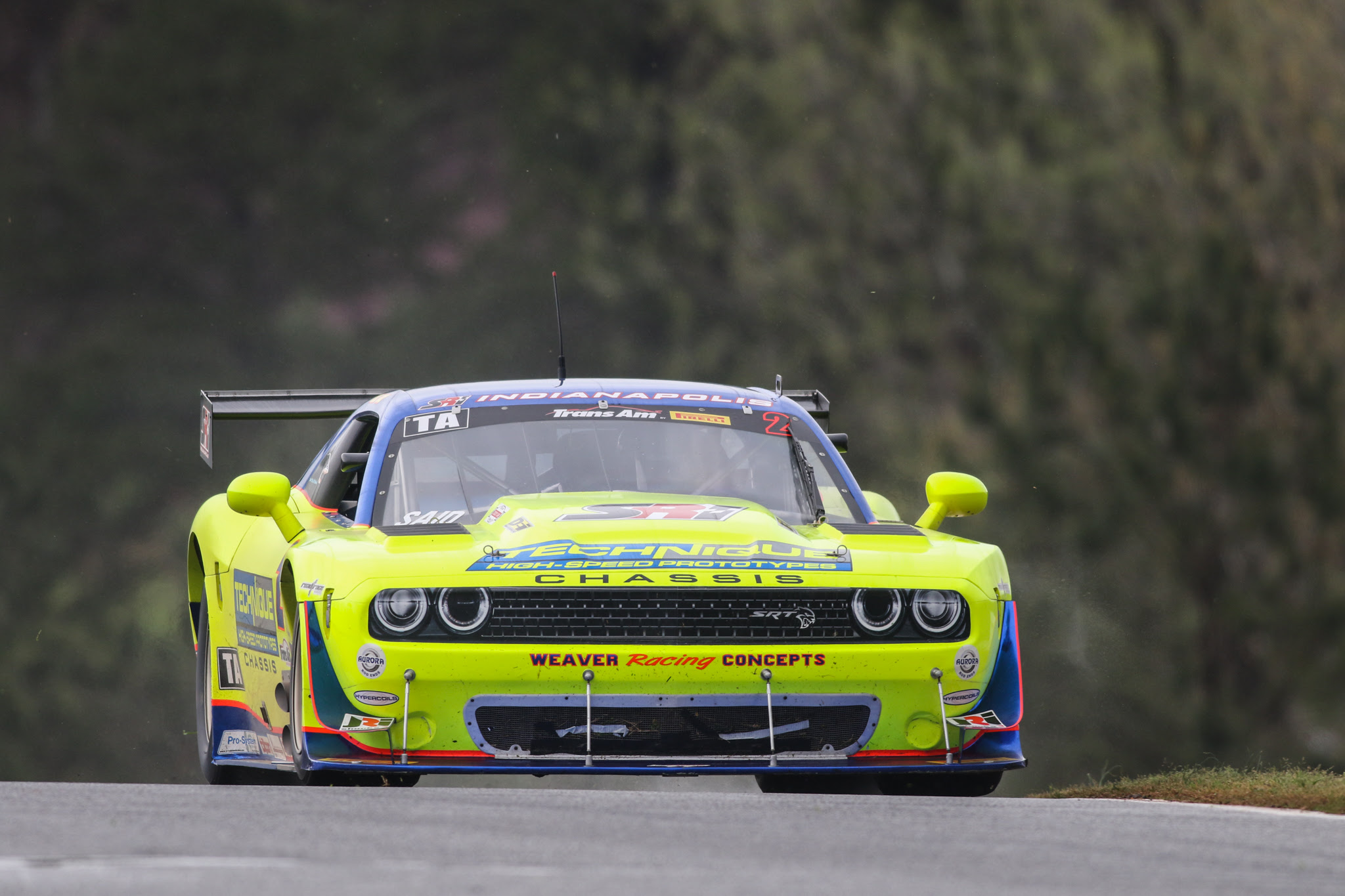 Justin Marks had a pair of off track slides in the No. 99 Coca-Cola/Ave Motorsports Corvette, but fought back to take third at the finish. David Pintaric placed fourth in the No. 57 Kryderacing Ford Mustang, holding off Chris Dyson, who came all the way from 23rd-starting position to place fifth in the No. 20 Plaid Ford Mustang.

The caution waved on the opening lap for the spinning No. 22 Davini Plastic Surgery/Pinnacle Aston Martin Vantage V8 of Steven Davidson, who aquaplaned in the Esses and hit the Turn 4 wall backwards, with the impact hard enough to move the barrier. The field was briefly red-flagged to accommodate repairs.

Tomy Drissi started on the Motul Pole in the No. 8 Lucas Oil Chevrolet Camaro, but was passed by Said on the opening lap. After the green flag waved, Francis caught Said and needed four laps to take command.

Drissi ran a steady fourth before his day came to an early end when he experienced engine problems on the 16th lap and pulled off into a safe location.

Adam Andretti pitted on the opening lap in the No. 43 ECC/Anchor Bolt & Screw Dodge Challenger, and then followed Dyson up through the field. He finished seventh, behind Charlotte Pro-Am Challenge winner Oscar Teran in the No. 3 Ford Mustang. 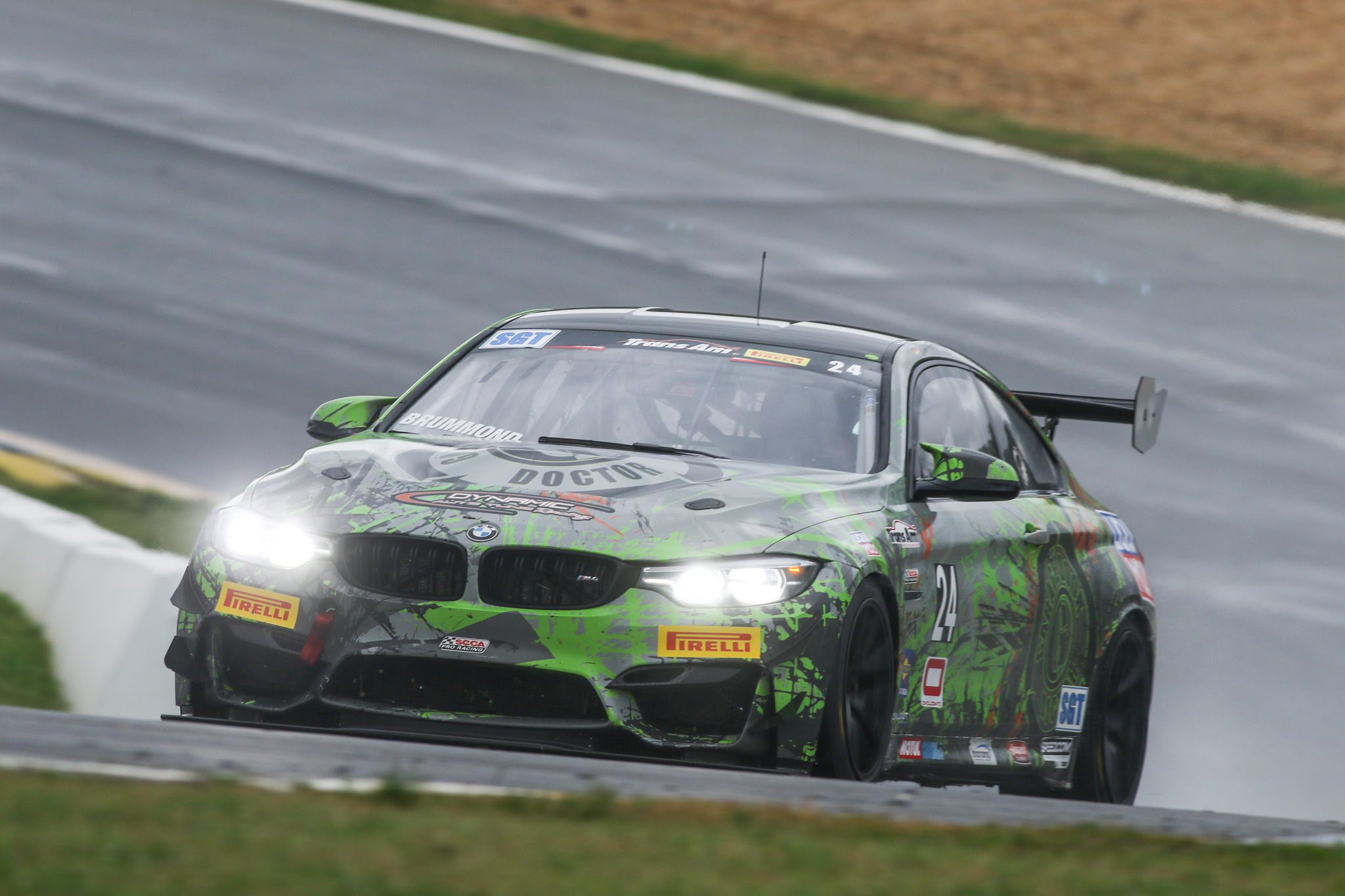 The SGT race also saw the early leader lose his advantage on the drying track, but with a different result in an exciting finish.

Mark Brummond pulled away in his No. 24 Garage Door Doctor/DynamicAuto Tune BMW M4 GT4 in the early going.

Meanwhile, pole winner Mike Phillips in the No. 97 F.A.S.T. Auto Racing Corvette fell back to fourth, behind Brummond, Lou Gigliotti in the No. 28 G2 Motorsports Park Corvette and defending champion Lee Saunders in the No. 84 Landsearch LLC Dodge Viper.

Phillips took second with 12 laps remaining, and then gradually cut into Brummond’s advantage. He caught the struggling BMW on the final lap, with the two going back and forth before Brummond held off his foe by a mere 0.114-seconds short at the finish line.

“I had a good race,” said Brummond. “It was fun. We had a little battle at the end, and he got me in five, I got him in six and seven, then he got me in 10, and I took him in 10b. It was an exciting battle with good driving and a great crew.”

It was Brummond’s third Trans Am victory. He won in his debut last year at Mid-Ohio, and also won the 2020 season finale at Road Atlanta.

Phillips had a career-best finish in his second Trans Am start after finishing third in his debut in the Sebring season opener.

“The weather was everything, it was my first time using the Pirelli wets,” Phillips said. “It’s a really good tire, and I was really impressed. I felt a little lost at first with the big TA cars. We had a little bit more mid-corner speed but they have all the power in the world so it took me a bit to find my place out there. Towards the end of the race, we almost pulled it off; we were down by 22-seconds and ended up being right at the line. It was a really good race.”

Gigliotti rounded out the SGT podium, while Saunders spun before start/finish with only two laps remaining and could not continue with a broken drive line. 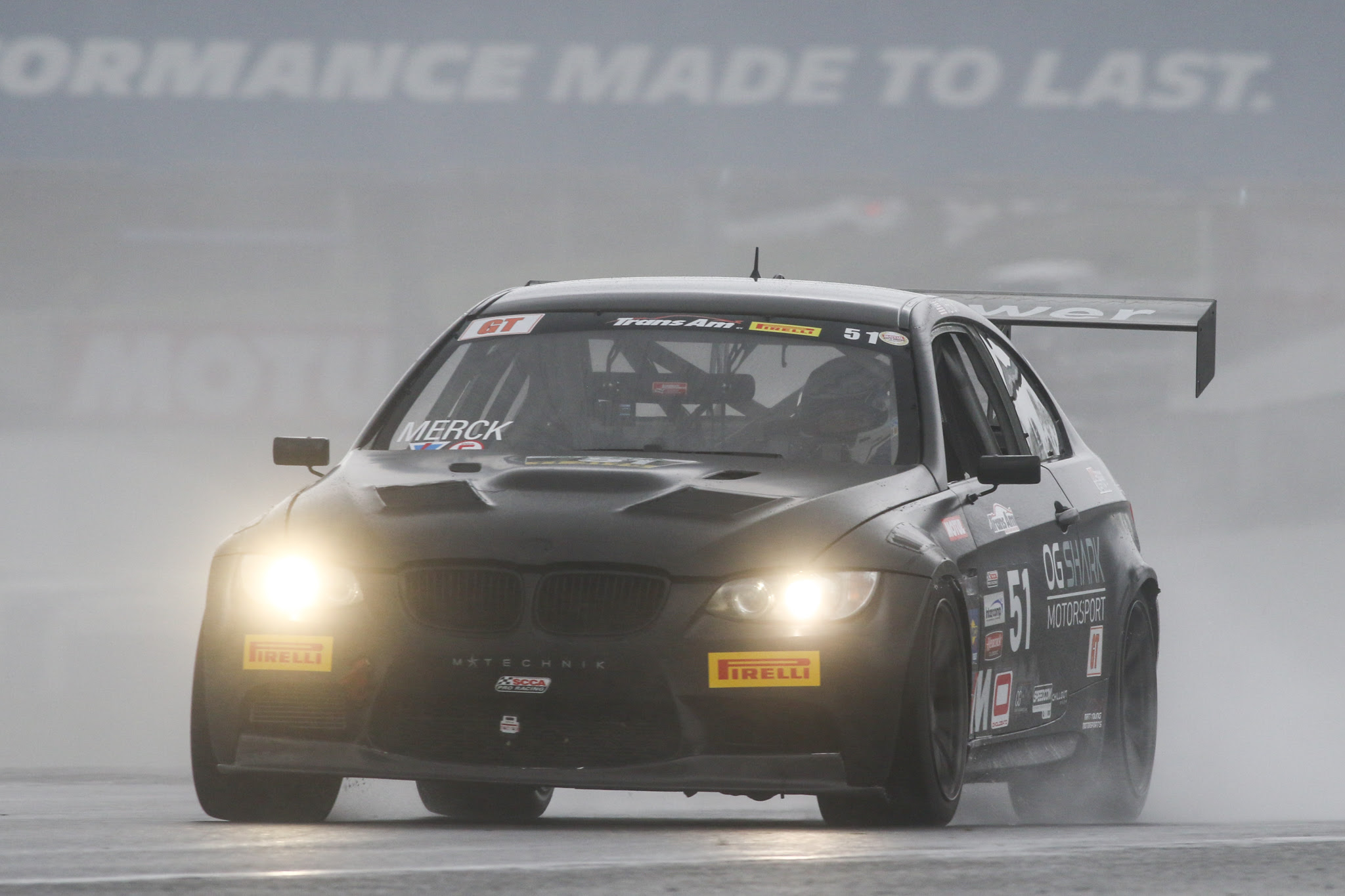 Milton Grant finished fourth, earning Masters honors in SGT. It was the 499th career race for the 72-year-old Germantown, Tenn., driver, who finished one position ahead of his son, Carey Grant.
BMW also won in the GT class with Jason Merck in the No. 51 OG Shark BMW M3.

“I’ve had a lot of fun,” said Merck, winning in his first Trans Am appearance. “It’s been a great experience. All we wanted to do was cut our teeth in Trans Am this weekend, and it’s been awesome.”

Billy Griffin failed to make the start in the No. 14 Griffin Auto Car/Sheehan’s Towing Mustang. The 2020 GT champion damaged his steering rack in an incident during Saturday’s qualifying, and the team could not replace the part by the start of the race. 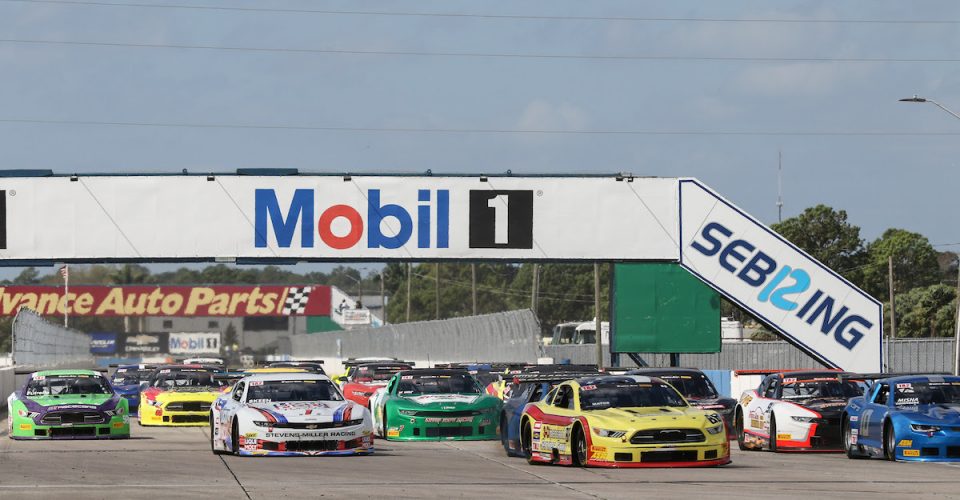 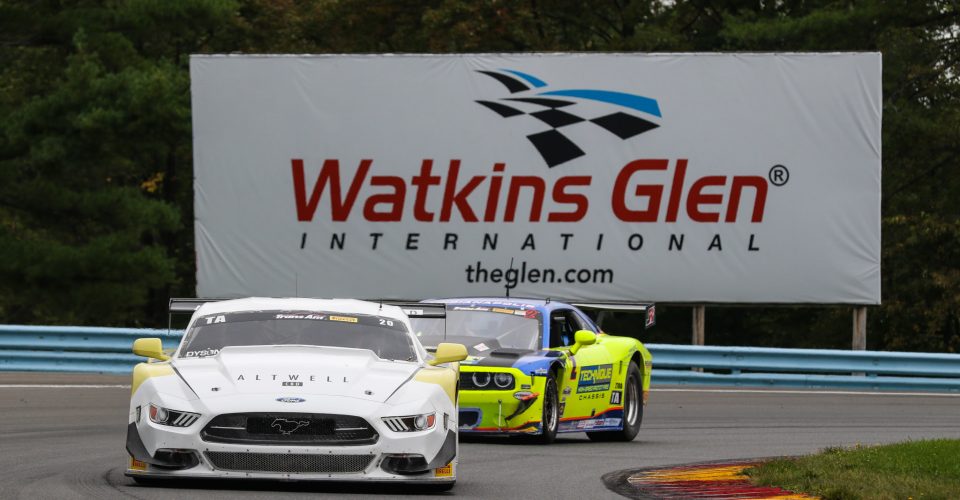 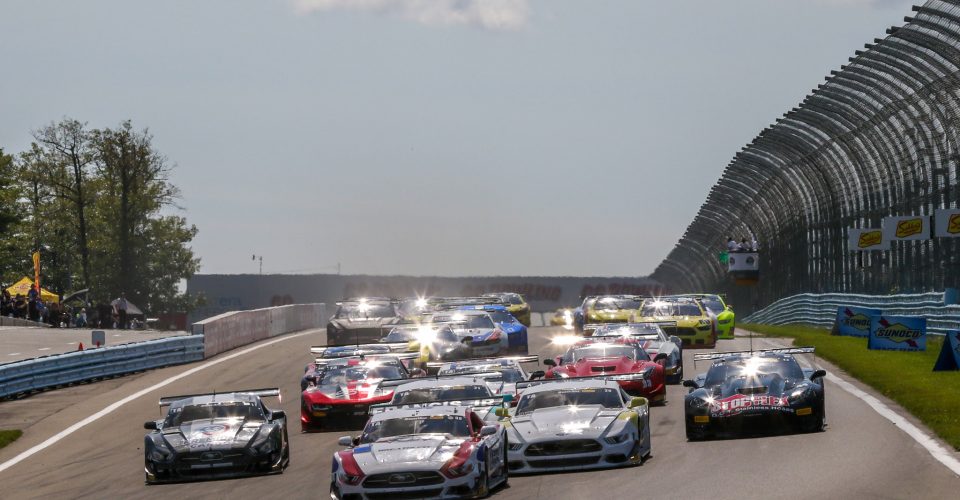