Round 3 Racing Wins at Mid-Ohio 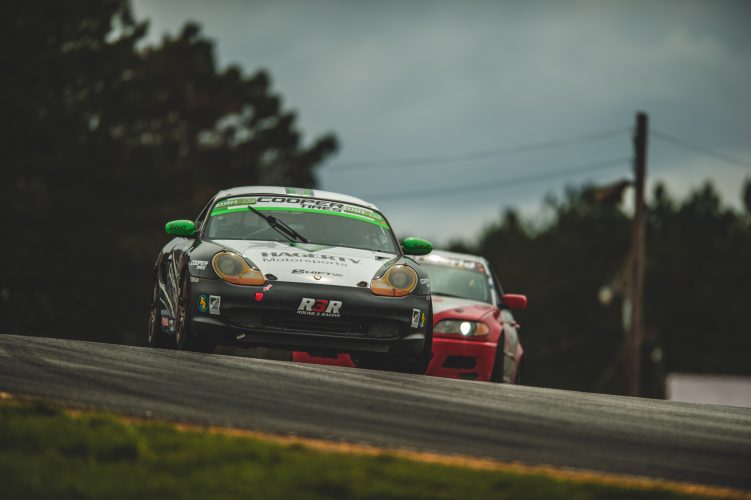 The No. 605 Porsche Boxster driver line up of Cole Loftsgard, Carter Pease, Dennis Neel, David Kicak battled through eight hours of ever changing weather and track conditions to claim the final step on the post-race podium.

Having set the fastest lap of the class during the first race on Saturday, Loftsgard opened the race from the pole position and quickly started pulling away from the drop of the green flag.

By the one-hour mark, the No. 605 had a 39-second lead to second place, which expanded to a full three lap advantage as Loftsgard completed his four-hour stint before handing the car over to Pease on Lap 101. 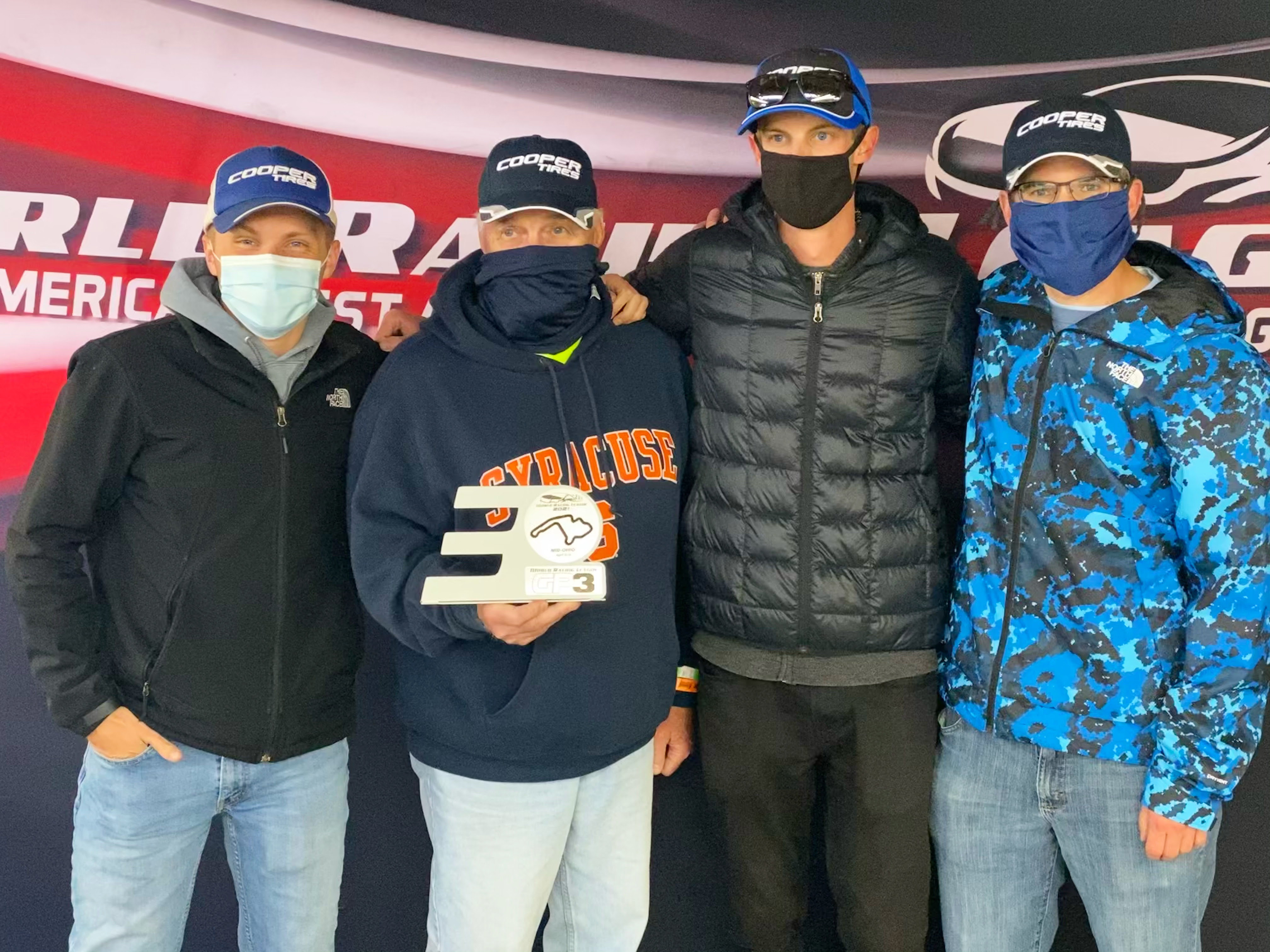 Pease continued to move the No. 605 through lapped traffic when rain began to fall. The technical road course quickly became slick, but careful driving by Pease kept the team in contention heading into the final hours. Unfortunately, a long stop in pit lane for a driver change saw the advantage that the No. 605 had built soon be erased, but the team was able to hold fast and come home with a third place finish when the checkered flag flew.

The foursome joined forces behind the wheel of the Porsche Boxster for the first time this weekend. The Mid-Ohio weekend saw the all-new line up capture a lot of laps out front as well as two podium results as the four racers look forward to the rest of the WRL season on board the No. 605 Porsche.

“A big thank you to Round 3 Racing for giving us the opportunity to be contenders and giving us a great car to work with,” said Loftsgard. “I had been out of a race car for over a year before this weekend, but being able to walk away with two trophies is an amazing return to the driver’s seat. We have what it takes to win and we will be back to fight for that at Road America.” 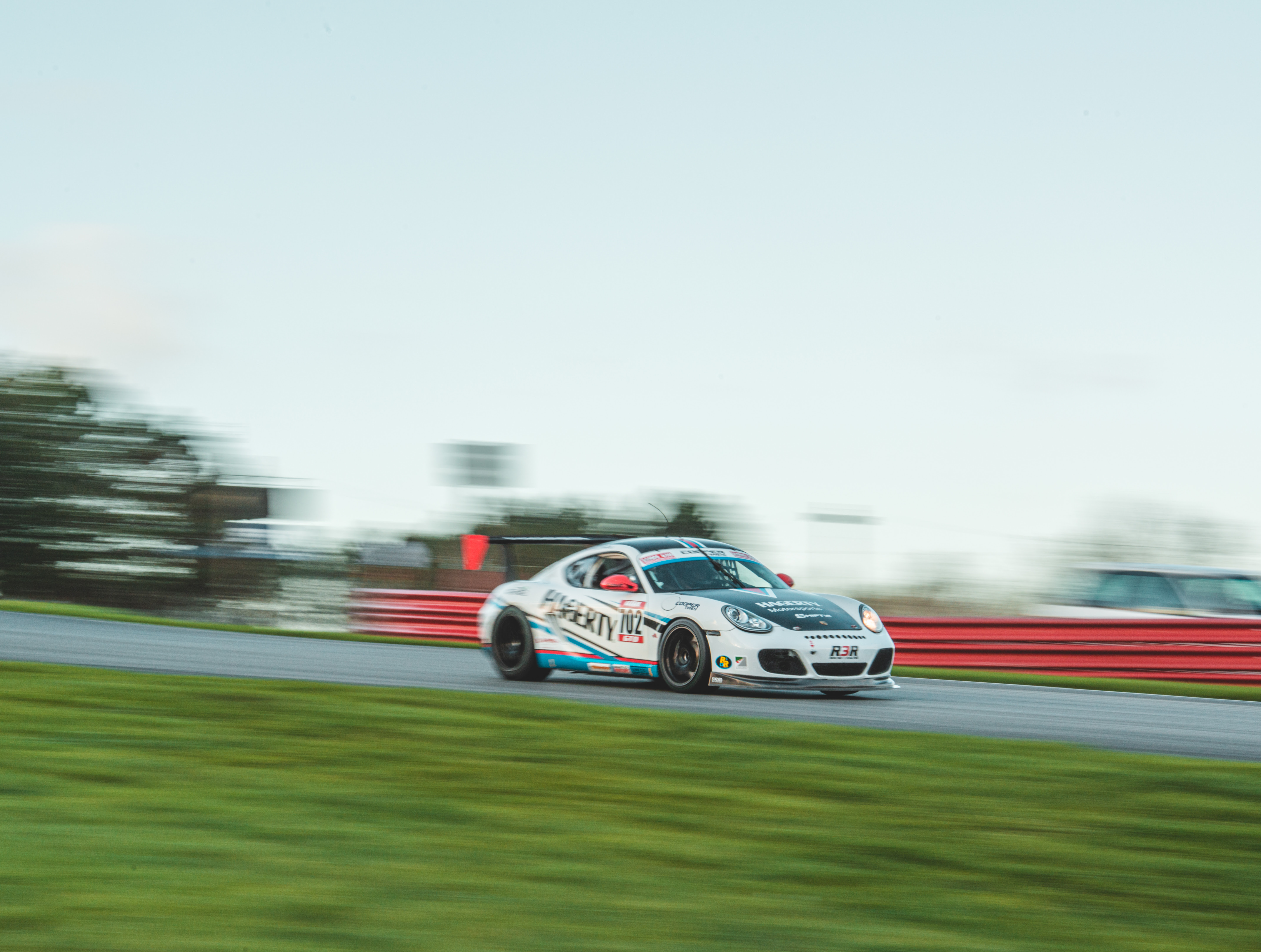 The No. 702 Hagerty Porsche Cayman of Sarah Montgomery, Brad McCall and Buz McCall fought through adversity to take home 11th place. Montgomery took the green flag in the No. 702 moving into the overall lead in the opening corners. The Shift Up Now athlete kept the Cayman in the lead for 46 laps before completing her stint.

The McCalls circulated the Ohio course while the skies opened up. The tricky conditions kept the No. 702 from gaining position placing the Porsche entry just outside of the top ten.

Christian Maloof, Mike Smith and Hannah Grisham ran the No. 604 Sentinel Porsche Boxster to the front of the GP2 field, but an on-track racing incident on Lap 172 saw the machine classified sixth at the finish.

Saturday’s GP2 race-winning lineup of Loni Unser, Mike Gilbert and Mo Dadkhah had their sights set on a return to the podium on Sunday. Gilbert started the eight-hour race in the No. 601 Team Cooper Tires Porsche Boxster and quickly moved into contention. 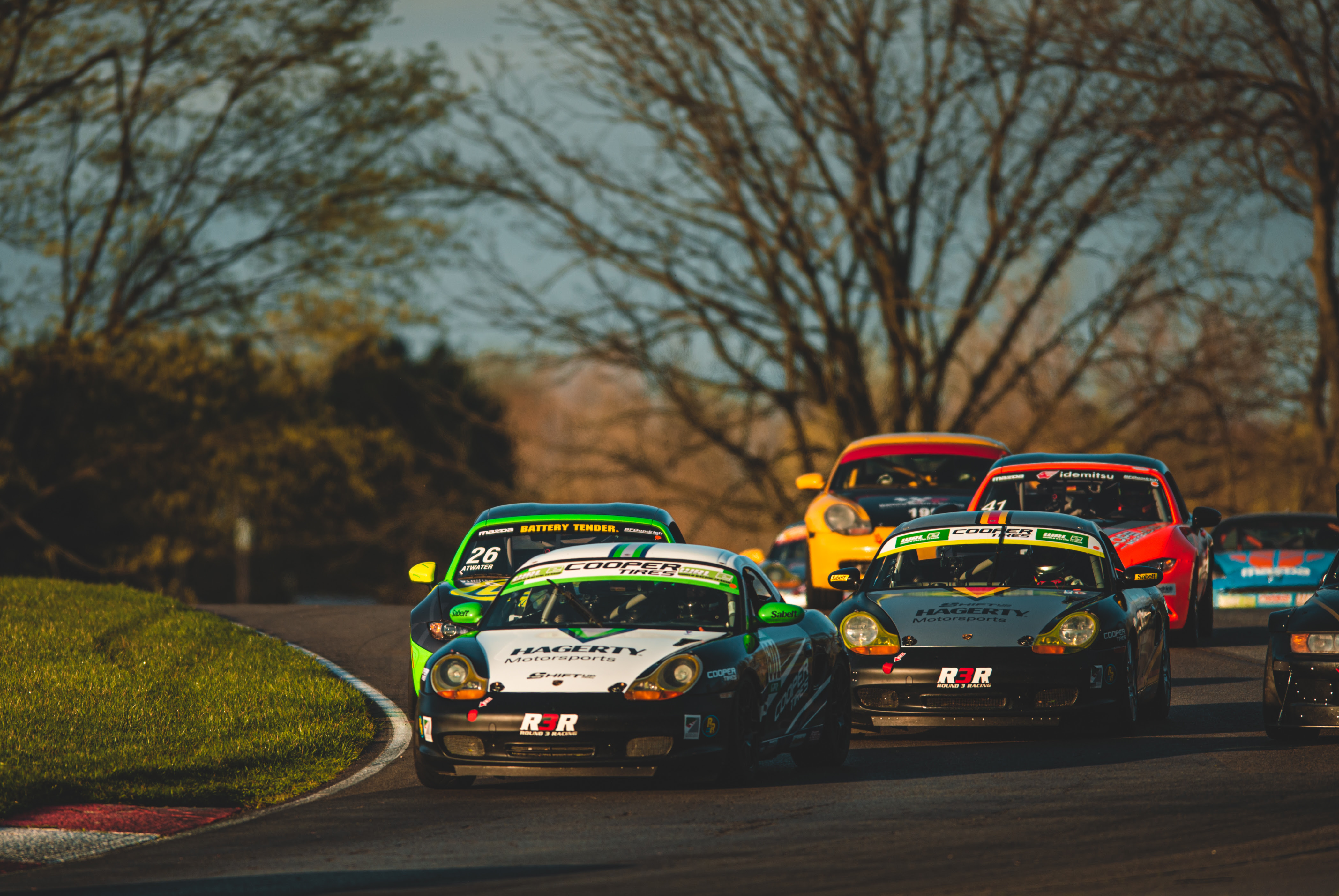 On Lap 69, Gilbert took over the GP2 class lead when the race was red flagged due to an on-track incident. After the 44-minute pause, the field began to move again and Gilbert brought the Team Cooper Tires Boxster to pit lane for fuel and a driver change. Dadkhah took control of the No. 601 on Lap 70. Shortly after returning to the racing surface, Dadkhah was forced to bring the Boxster back to pitlane. The No. 601 Team Cooper Tires Porsche Boxster was diagnosed with a mechanical failure forcing an early retirement.

Each of the Round 3 Racing entries led their class during the race on Sunday.

“It was a weekend of highs and lows, but that is racing,” said Team Owner Buz McCall. “The Round 3 Racing crew did a great job preparing each car. We are super happy about the No. 605 guys getting a podium and representing the team! The other three cars had a string of poor incidents and conditions come together that made for an early day. We will take everything we learned from this weekend back to the shop and use it to better ourselves and the cars for Road America next month.”

Round 3 Racing will next head to Elkhart Lake, Wisc. for the third round of the WRL season at Road America. The weekend will feature two eight-hour endurance races on Saturday, May 8th and Sunday, May 9th. 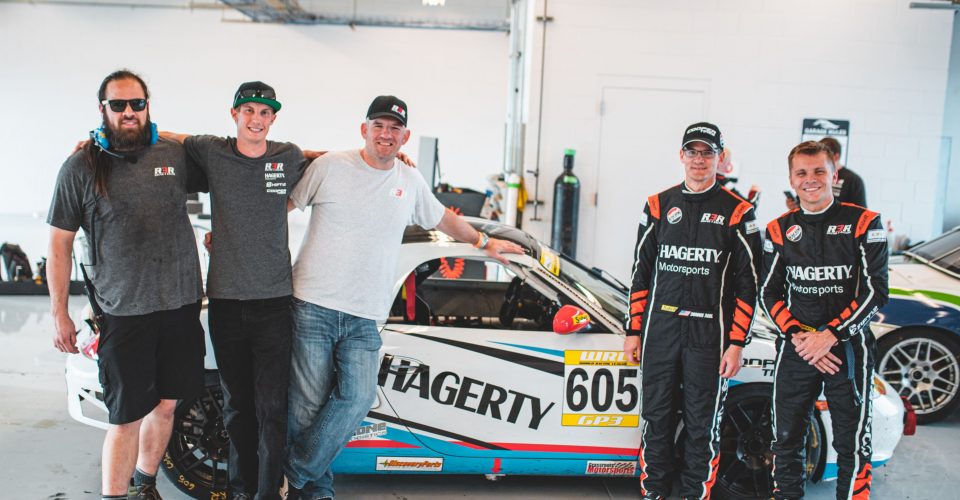 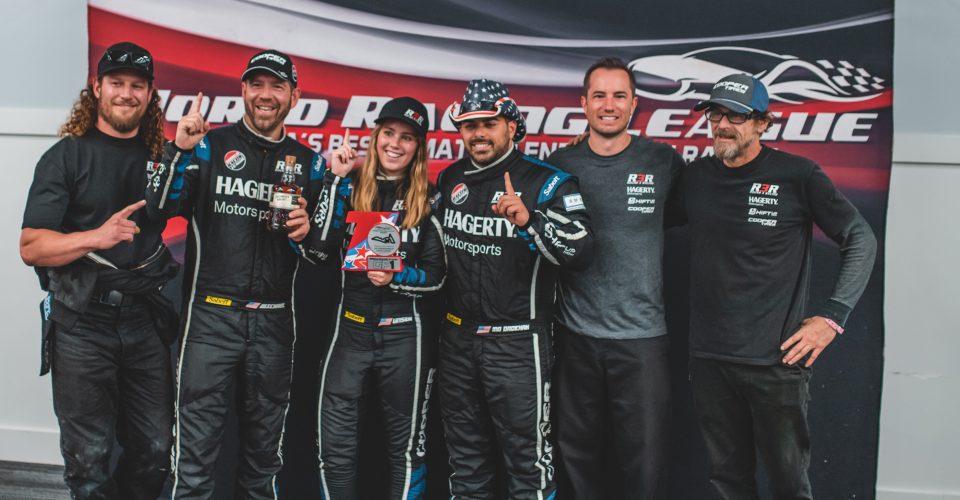 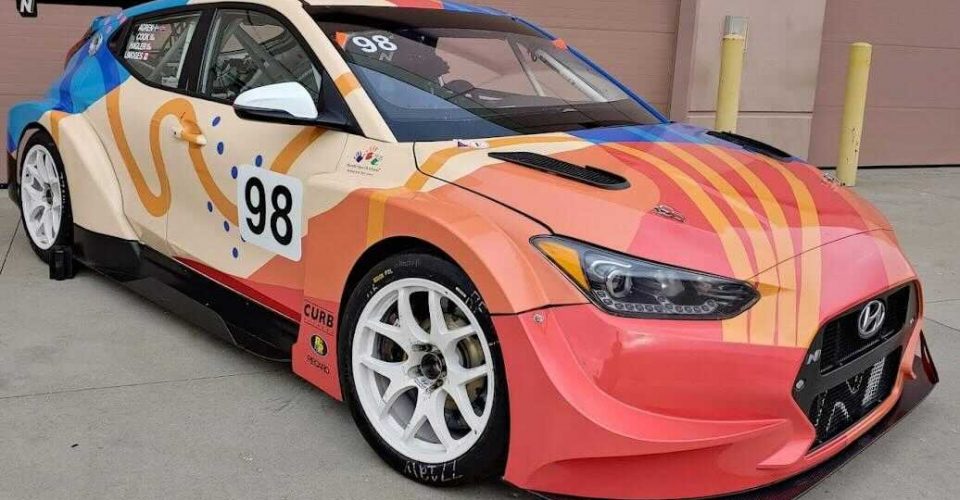