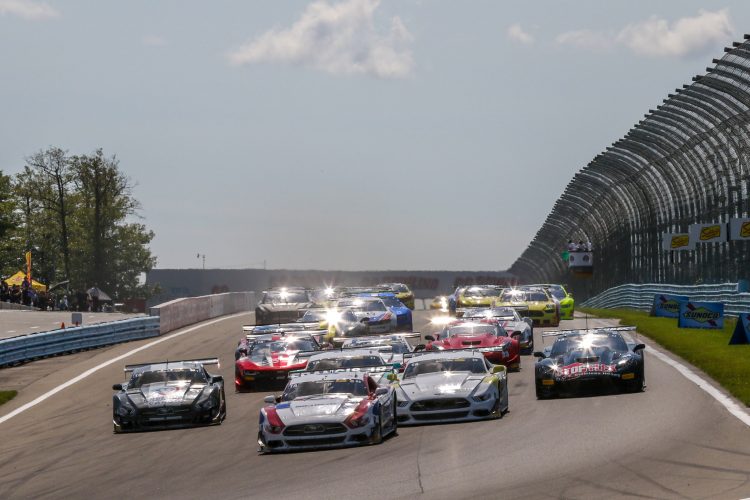 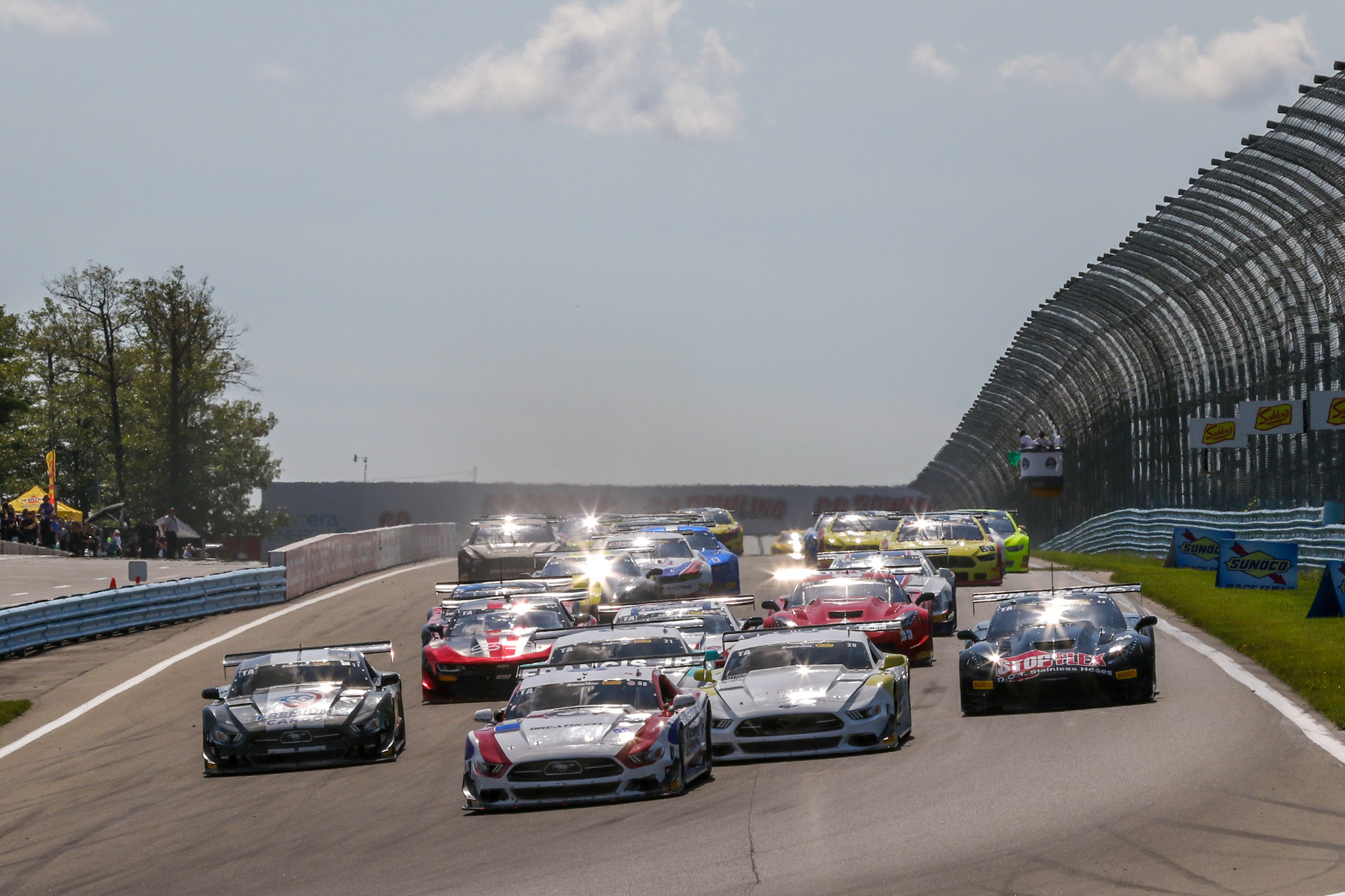 WATKINS GLEN, N.Y. (11 September 2021)- With championship runs on the line and more than 40 cars sharing a 3.4-mile course, drama was sure to follow in the Trans Am Series presented by Pirelli all-class race at Watkins Glen International on Saturday afternoon. In an action-packed 100-mile showdown, Tomy Drissi crossed the line first, but it was Chris Dyson who claimed the victory after the post-race review showed that Drissi passed the No. 20 ALTWELL CBD Ford Mustang under yellow conditions. (VIDEO: TA Race Recap)

Rafa Matos extended his TA2® points lead, driving the No. 88 3 Dimensional Services Ford Mustang to his third consecutive win at The Glen. Erich Joiner (XGT) and Justin Oakes (SGT) also won from the pole in their respective classes.

“I am over the moon, celebrating my 20th anniversary of professional racing at Watkins Glen with a win,” said Dyson. “It’s always a thrill to put No. 20 ALTWELL CBD on top of the standings. We are happy now, but we are very much still focused on the race tomorrow. We want to close the weekend out in style as we go for another race win on Sunday.” 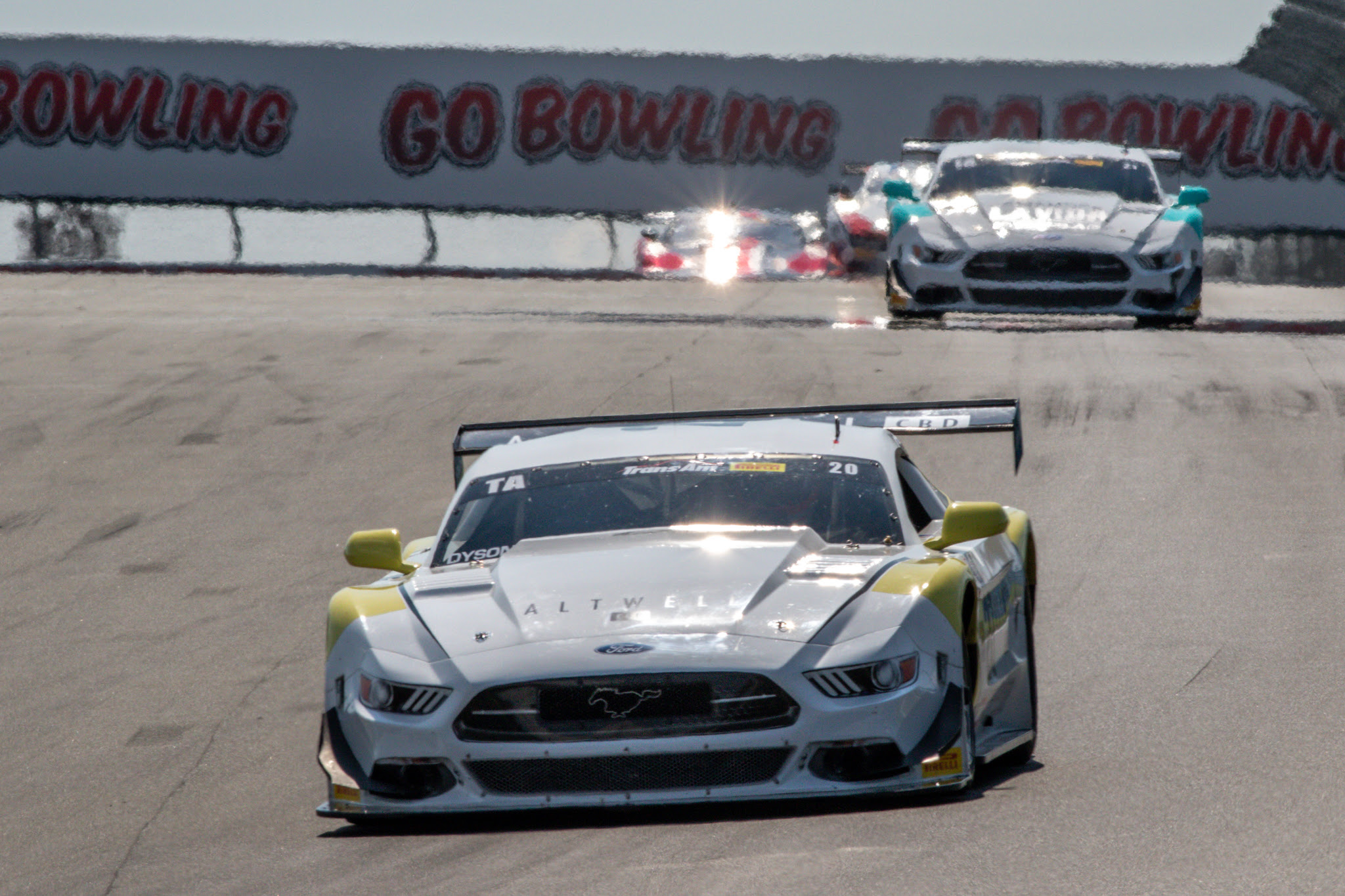 Pole-starter Ernie Francis Jr. fended off Dyson on the restart to lead all but the last four laps of the race. After controlling the pace and pulling away from the field, Francis Jr.’s No. 98 Future Star Racing/Wings & Wheels Ford Mustang engine seized, forcing him to immediately stop on the circuit to bring out the final full- course caution. Francis suffered a similar fate at Road America after charging through the field from a near last-place start to first before mechanical issues took him out of the race.

Though he did not get his desired result today, Francis Jr. will have another chance tomorrow as he will start on pole after setting the fastest lap in Saturday’s race.

“I’m not sure what happened, we had something let go in the engine,” Francis Jr. said. “We’re climbing into it now to see what we can fix and get it ready for the next race. It’s pretty frustrating, a rough year with a lot of endings like this to races we should have won. We have the speed, we just don’t have the luck; we need to keep it together. I’m really frustrated right now, but our guys will get on it and see what we can do to try to make it up tomorrow.”

Trying to capitalize on Francis Jr.’s misfortune, Drissi challenged second-place Dyson for the point, overtaking him as Dyson slowed for the yellow. Drissi, who is second in the TA championship, was penalized 40 seconds following a review by the race stewards for passing under yellow and making avoidable contact with another driver.

In only his second time behind the wheel of a TA machine, Dyson’s teammate Guy Smith made it a one-two finish for CD Racing, wheeling the No. 21 Amamos LaVida Tequila Ford Mustang.

‘“It was definitely a very exciting race,” Smith said. “Unfortunately for me, I got hit from behind on the first lap, trying to avoid the chaos in the Boot, so my race for first was pretty much over at that point. But I’ve got the best team in the house. It was a great race. I had the best seat in the house, seeing these two guys (Dyson and Drissi) going at it over the last few laps was pretty exciting. I think tomorrow will be a lot more fun.”

Dyson added, “I was thrilled to be joined on the podium with Guy (Smith) for our first team one-two result of the season. He’s been my teammate for many years, and he’s been a terrific help to the team for the championship.”

Two-time champion Amy Ruman fought mechanical issues on Friday but recovered on Saturday to finish fourth in the No. 23  McNicholsCo/CornerTechCNCSolutions Chevrolet Corvette. After penalties were assessed, Ruman earned her first podium result of the season. 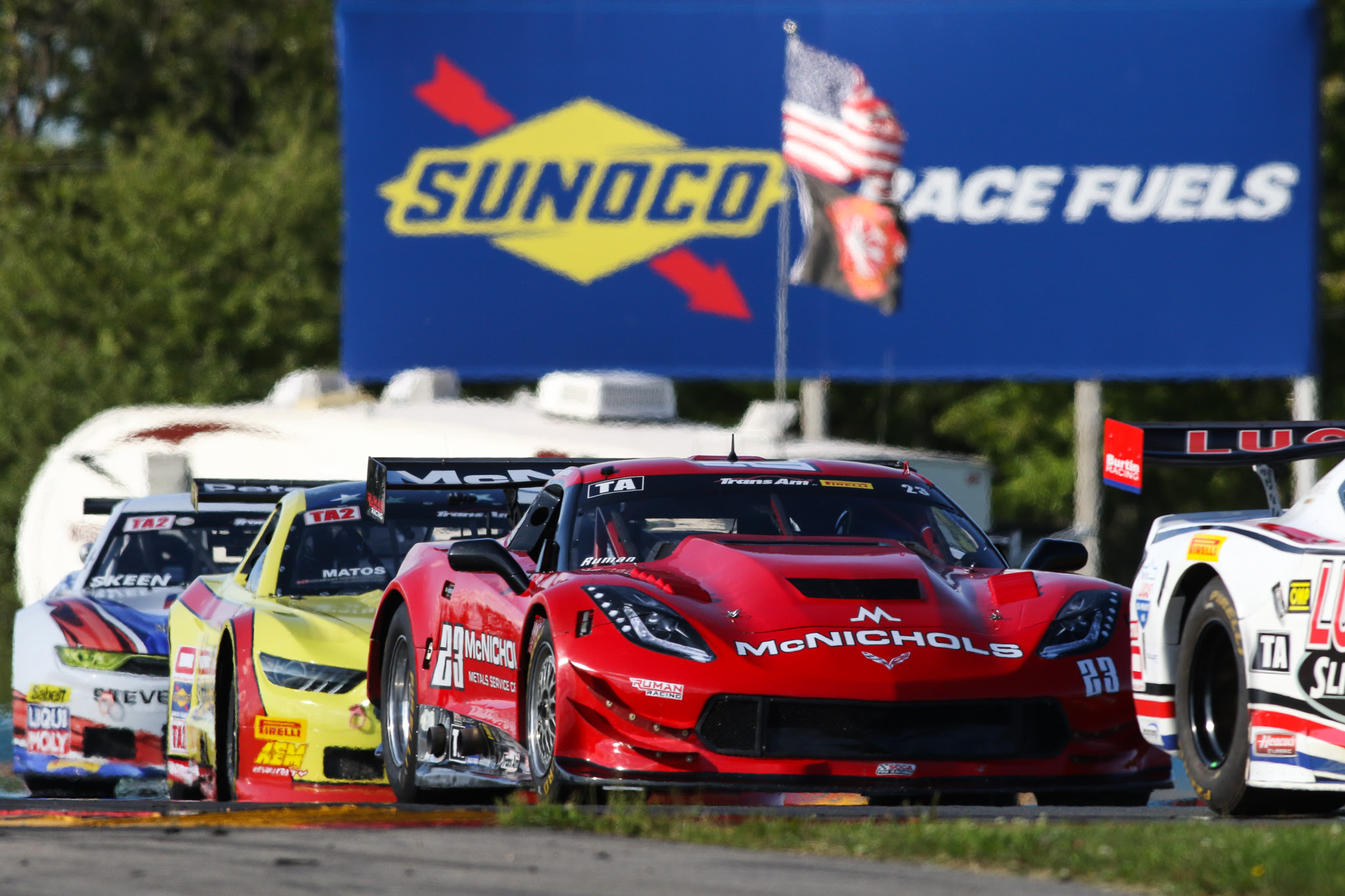 “We were really happy with our results today after having some mechanical issues in testing and missing practice,” said Ruman. “The crew worked diligently to get the No. 23 back in action just in time for qualifying. I started P9 and kept my nose clean and took the checkered in fourth. There was some controversy upfront near the end of the race, and I was just informed that we moved into third place after some penalties were assessed. It’s not normally how I like to get onto the podium, but that’s racing and we’ll take it.” 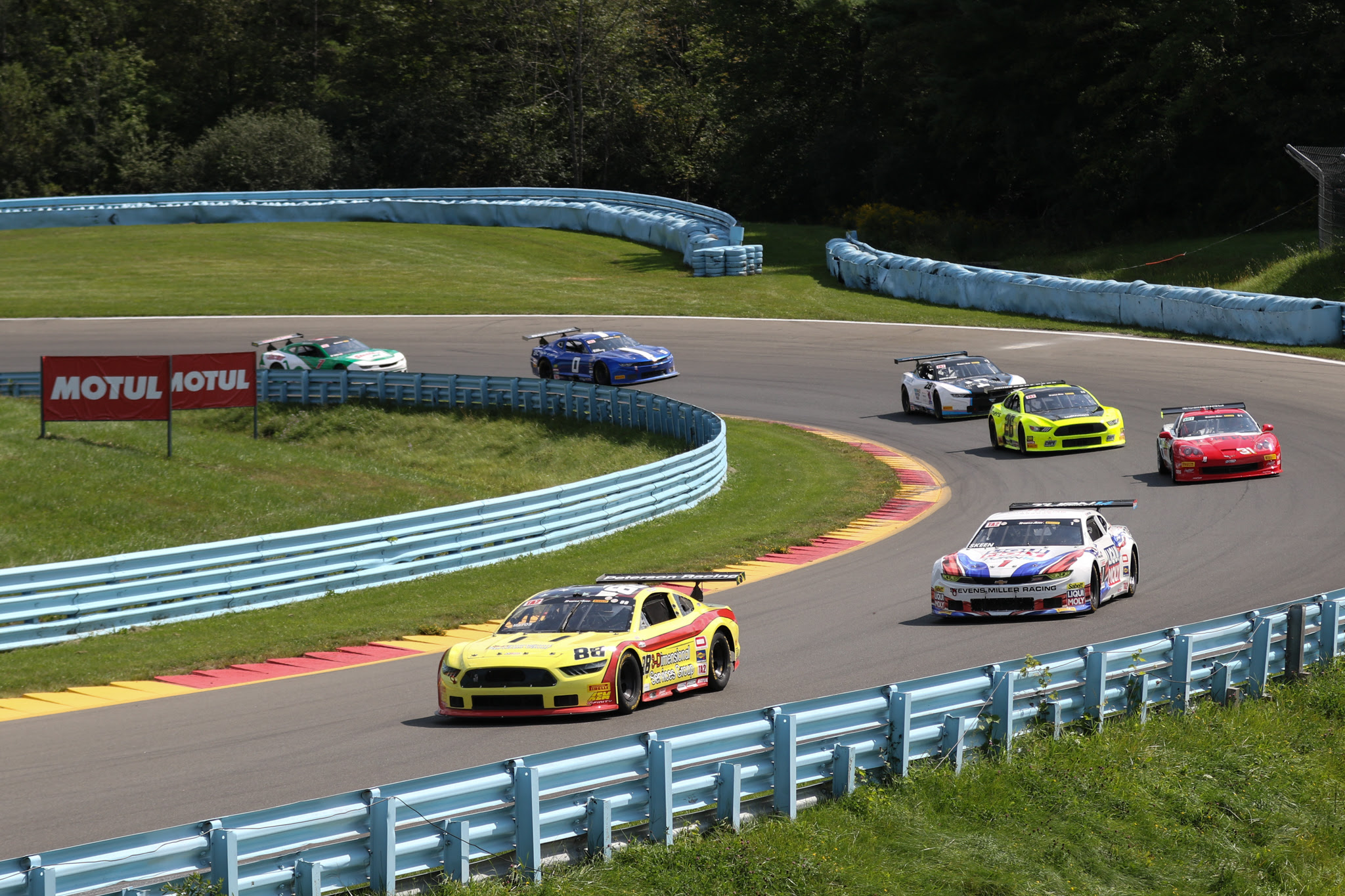 Matos battled Skeen through traffic on the opening lap to take the lead. Skeen repaid the favor after reclaiming the point on the first restart. The pair diced back and forth until Matos made his last pass stick on the second restart after Masters Class drivers Maurice Hull (No. 57 Silver Hare Racing Chevrolet Camaro) and Kerry Hitt (No. 19 Advanced Composite Product Cadillac CTS-V) brought out the full course caution on Lap 12. The victory extends Matos’ championship lead and he will start on pole for the TA2 class in Sunday’s finale.

“Three in a row for us at Watkins Glen!” Matos exclaimed. “The weekend started out slow with some problems with the car. The balance wasn’t there for the first day. We kept on working. It was a little bit off in qualifying, but we made some really good changes overnight and the car was right on pace. I had a clean start, and Thomas (Merrill) and Mike (Skeen) kept me honest for the whole race. We’ve been working really hard all year to win the championship, and this was a big step for us.” 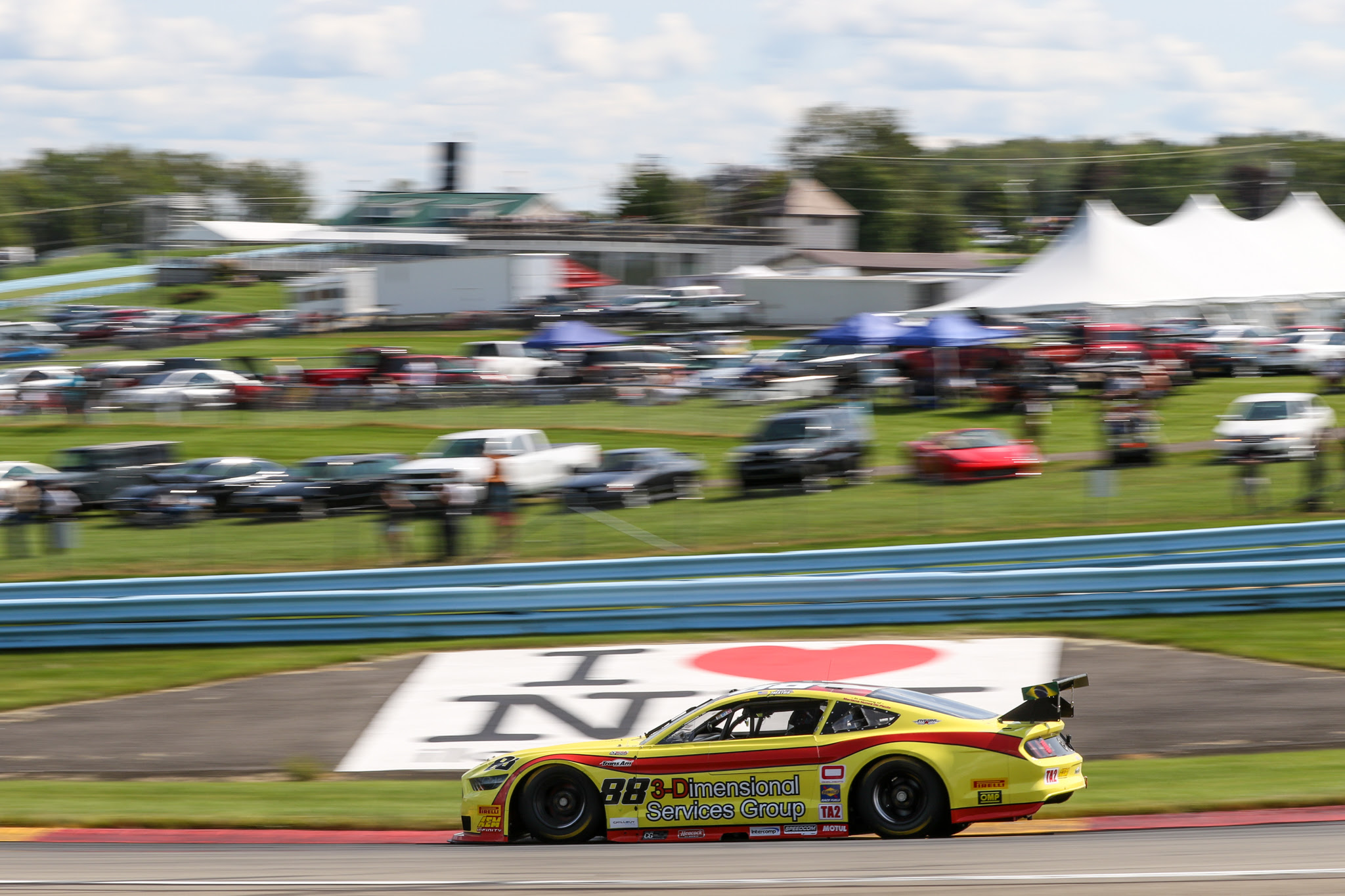 “It was a great race for us,” said Merrill. “We had been struggling with the balance all weekend, and we finally found that magic touch right before the race and the car was a heck of a lot better. We did what we could to race forward. One of our guys, Jason Bowser, is home sick, but he figured out what was wrong with our car and called it in. He’s an integral part of our team. We fixed it, a big thanks to him.” 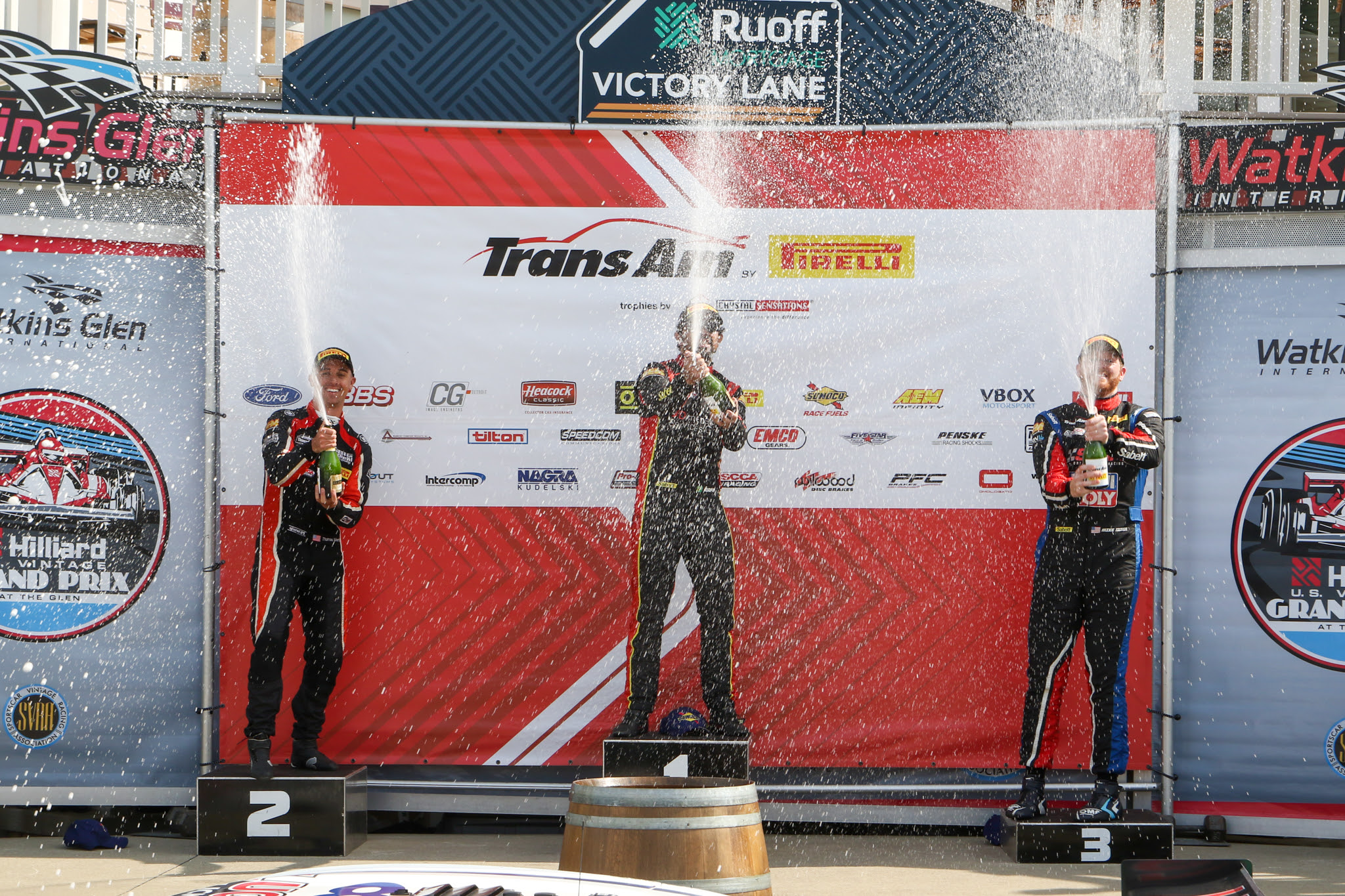 Skeen held off Connor Mosack and Misha Goikhberg to finish third, seventh overall, in the No. 1 Liqui-Moly/Turn14Distribution Chevrolet Camaro.

“I’m pretty disappointed with third,” Skeen admitted. “We had a great car in qualifying, lots of speed, but it didn’t equate to a great race car today. We struggled when we got behind some guys with the aero wash. We really fought the car a lot, but even though I’m frustrated I’m fortunate to be here, thanks to the Stevens Miller guys. We’ll be back for them tomorrow.”

Doug Peterson drove to an overall 18th place finish in the No. 87 3 Dimensional Services Ford Mustang for the Masters Class TA2 win. 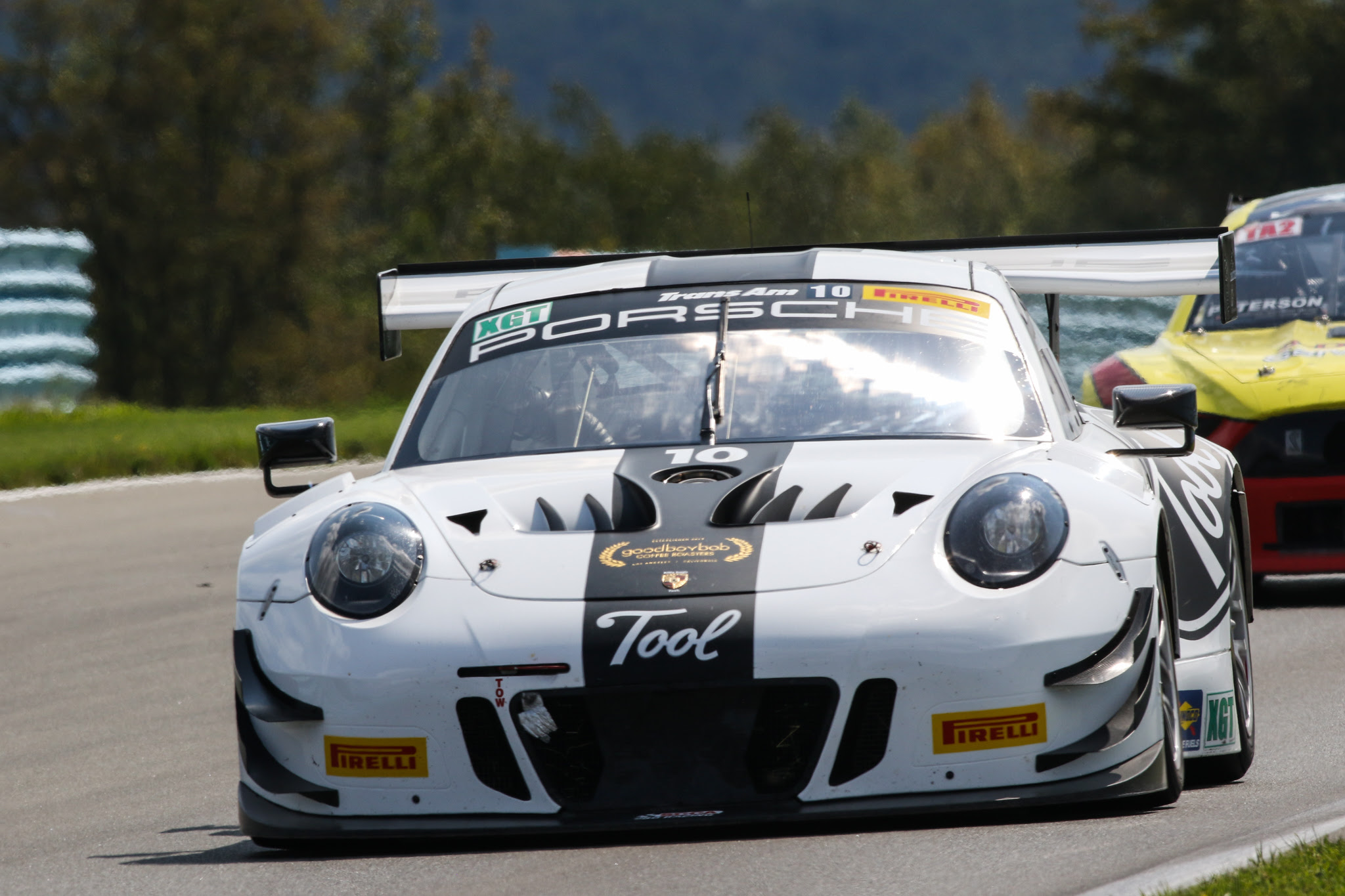 “It’s always a heck of a race with all the TA2 cars,” said Joiner. “We started back and tried to make our way through. We’ve got a great crew, and I couldn’t have done it without them. It was a heck of a race, the fans were on their feet, up against the fence, for all the race.”

SGT points leader Oakes held off the Grant family to take first-in-class behind the wheel of the No. 37  Droneworks Chevrolet Corvette.

“It was a wild experience,” said Oakes. “These production car classes are a lot of fun, but this was special because it was a mixed class. Being out there with the TA2 cars and TA cars it’s always fun seeing how these cars are going to perform. I had a good time mixing it up with some of the TA2 guys, and I had a blast. The team is doing great and we’re looking to do well tomorrow.” 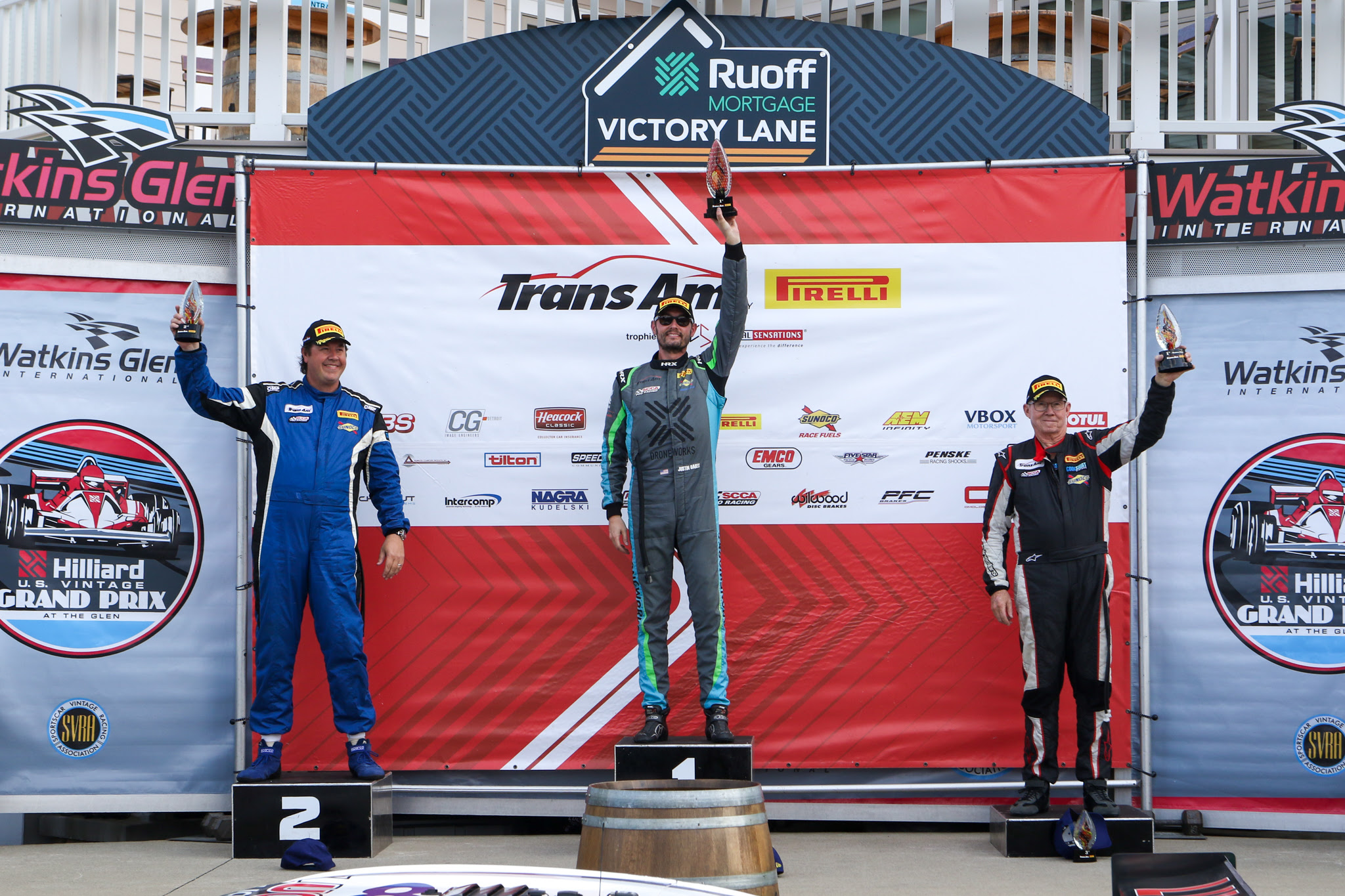 Carey Grant beat out his dad Milton Grant for a second-place finish in SGT. Celebrating his 50th Trans Am start, the elder Grant lost his speed pump halfway through the race but held on to finish third overall in SGT and first in the Masters Class. 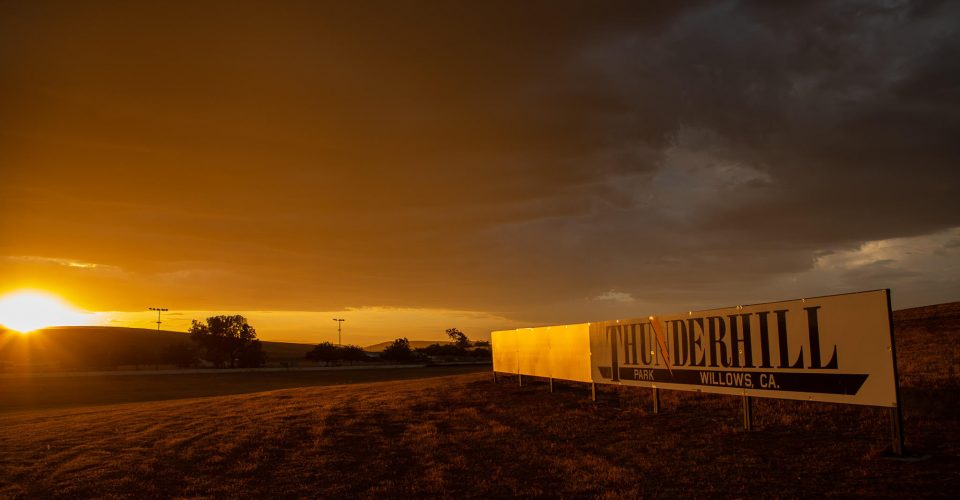 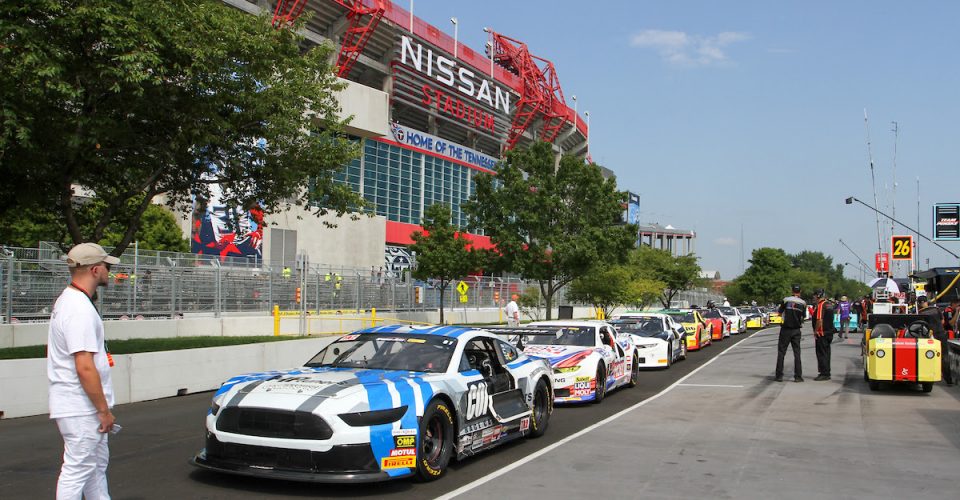 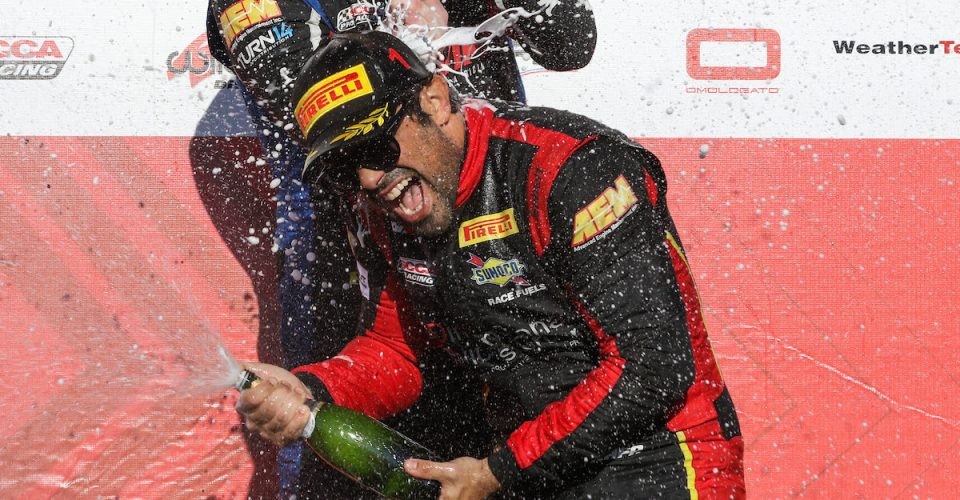