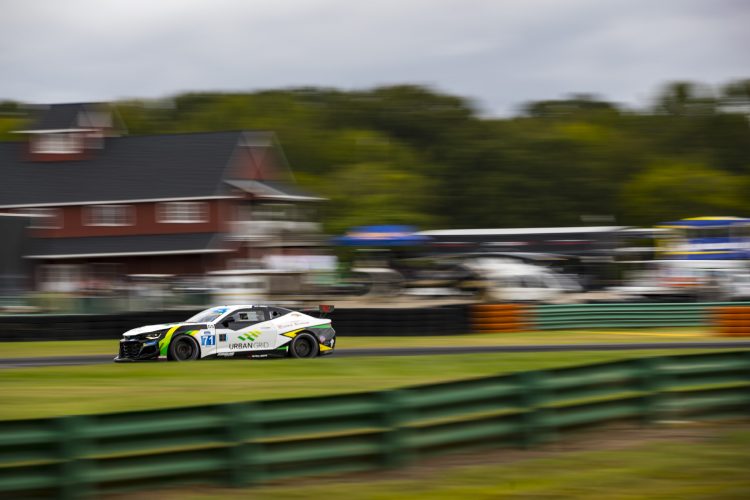 DANVILLE, VA (10 Oct. 2021) – Rebel Rock Racing’s Frank DePew led the first laps of his IMSA career at the midway point at his home track on Sunday, while a late charge by teammate Robin Liddell fell just 4.661-seconds short of victory on the way to a fourth-place finish in the Virginia is for Racing Lovers Grand Prix at Virginia International Raceway.

Winners at Sebring early in the season, the team rebounded from bad luck by sitting out a race to work on the No. 71 Urban Grid Chevrolet Camaro GT4.R, taking the time for extra preparation and testing.

The effort paid off on Sunday, with the team scoring its second-best finish of the 2021 IMSA Michelin Pilot Challenge campaign with only one race remaining.

“Frank did a helluva job since we came here testing,” Liddell said. “He did a super job then, and he’s really got his head together for this event. The strategy played out to where he was able to get out in front, which was great fun for him. He held his own and did a super job. He did everything he needed to do, and I think he’s moved to a new level of performance.”

The team elected to divide the race into two halves. DePew ran 12th at the 40 minute mark, and stayed out when the other contenders pitted, cycling to the race lead for the first time in his IMSA career. DePew led five laps, pitting under the first caution of the race and turning the car over to Liddell with one hour remaining.

“At the end of the day, I’m a very aggressive personality,” DePew said. “Some of that shows up in the race car, and it’s led to some car damage. Some of that damage hurts us in the race, but recently some damage showed up that we didn’t know about. We’ve had the capability all year, but it’s been a difficult year. I’m just learning to be patient in the car, and try to use my skills the best I can, let everything unfold around me and stay out of trouble. That’s what I did today. The car is better than it was, but we’ve still down on BOP and that showed today – we couldn’t get around the Audis, Astons, Mclarens, and BMWs, even if we got a good run on them. We decided we weren’t going to have another DNF today; we ran a good race and we were happy.

“I wish I could say I earned first place!” said DePew. “But I circled to first because of fuel strategy. I think I was driving with the top seven or eight, and I’m happy with that.”

Liddell rejoined the race in 11th, and quickly began moving his way up through the field. He was seventh when the second caution waved with just under 34 minutes remaining. Liddell moved up to fourth with 21 minutes remaining.

“The team did a great job and was flawless, but the yellows hurt us,” Liddell said. “The first yellow hurt us because of our strategy, and then how those guys ran those laps at the end on the fuel they had, there’s no way they could have done that [without the second yellow]. The bottom line is we didn’t have the overall pace and we struggled for top speed. At the end we struggled for grip, and we couldn’t defend against those guys who got around me. I just didn’t have the car under me to drive to the front. But ultimately, I’m very happy with a good, solid result. P-4 and the car’s in one piece.”

For DePew – who resides in the Richmond area – it was very satisfying to lead the race in front of family and friends.

“VIR’s my home track, and I’ve been going at it here for quite a while,” DePew said. “I’ve got to give a shout out to Connie Nyholm, track principal and Kerrigan Smith, VIR President for making this one of the best motorsports tracks in the country, and retains it old school intrigue and difficulty.  They’ve transformed this track into a World Class track that hasn’t lost any of its intrigue that it had previously. They have made it way safer, without losing the DNA of the track – which is amazing.”

Rebel Rock will be looking to build on today’s momentum when the IMSA season wraps up on Friday, Nov. 12, with the Fox Factory 120 during the Motul Petit Le Mans weekend at Michelin Raceway Road Atlanta.