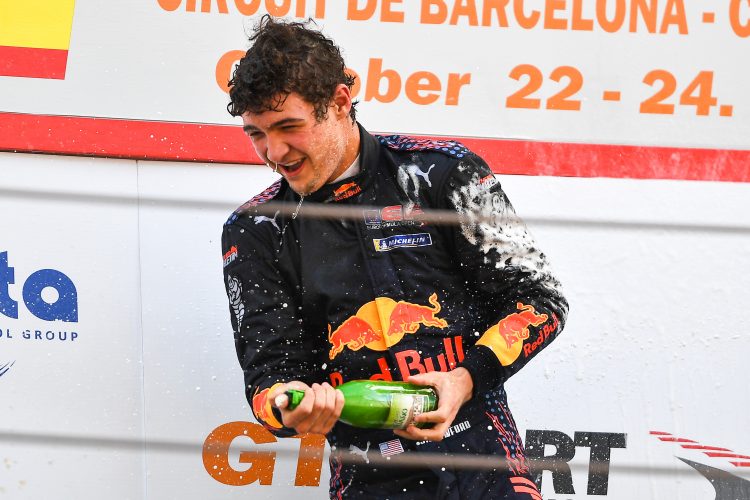 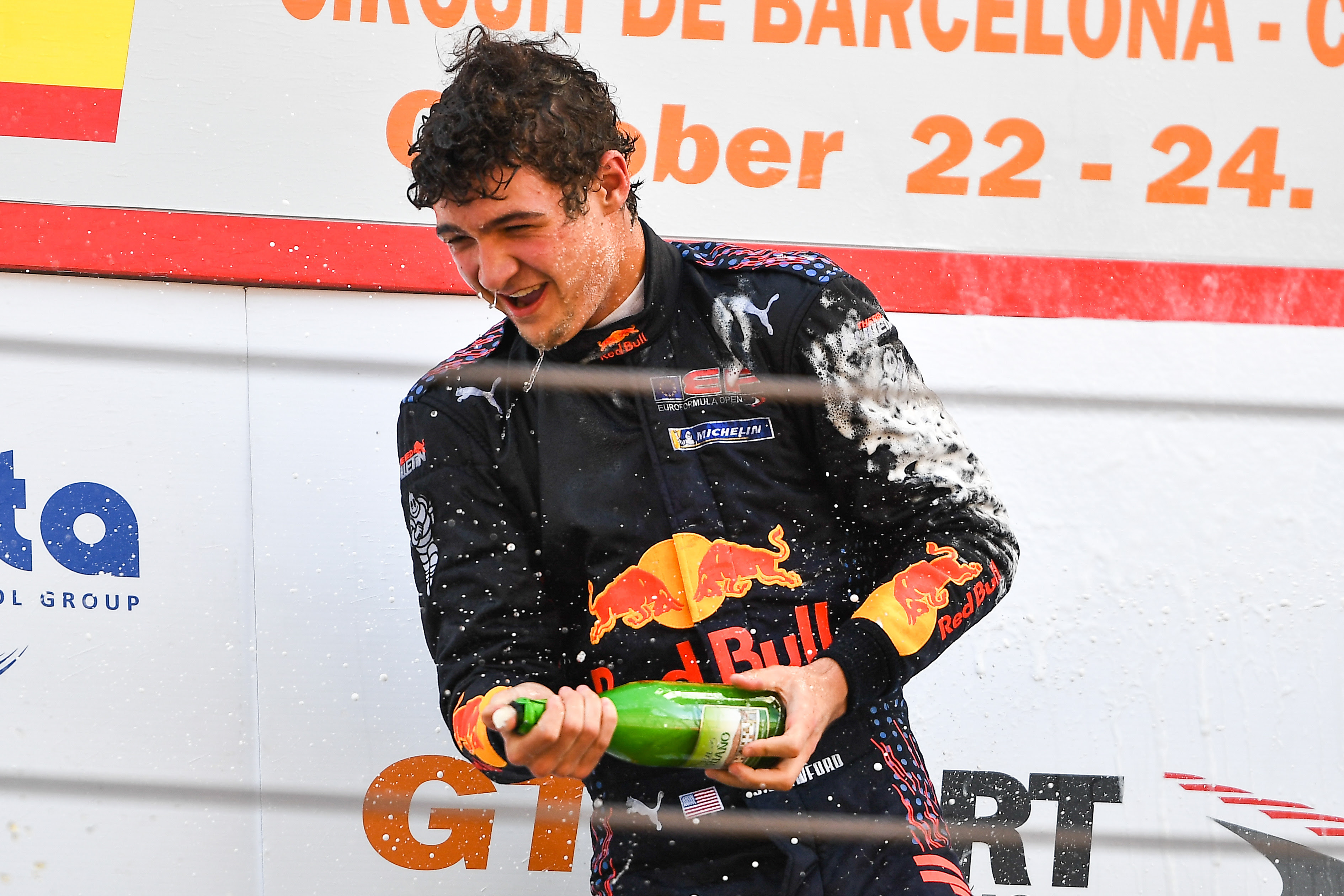 It was the eighth victory in 16 races for the 16-year-old Red Bull Junior team driver from Houston, driving the No. 52 Dallara for Team Motopark. The final weekend boosted him one position to finish third in the final standings, despite sitting out the opening two races due to age restrictions (he turned age 16 in time to compete in the Sunday race), and missing two full weekends due to commitments in the FIA Formula 3 series.

“I’m happy with the whole season,” Crawford said. “I can’t thank Motopark enough for giving me a race-winning car. Obviously, our objective was to win the races today, and see what happened in the points. I think it was a great year despite missing eight races. It’s a shame we didn’t get to race the whole season, but I’m still happy to win races and with what I’ve achieved this year.” 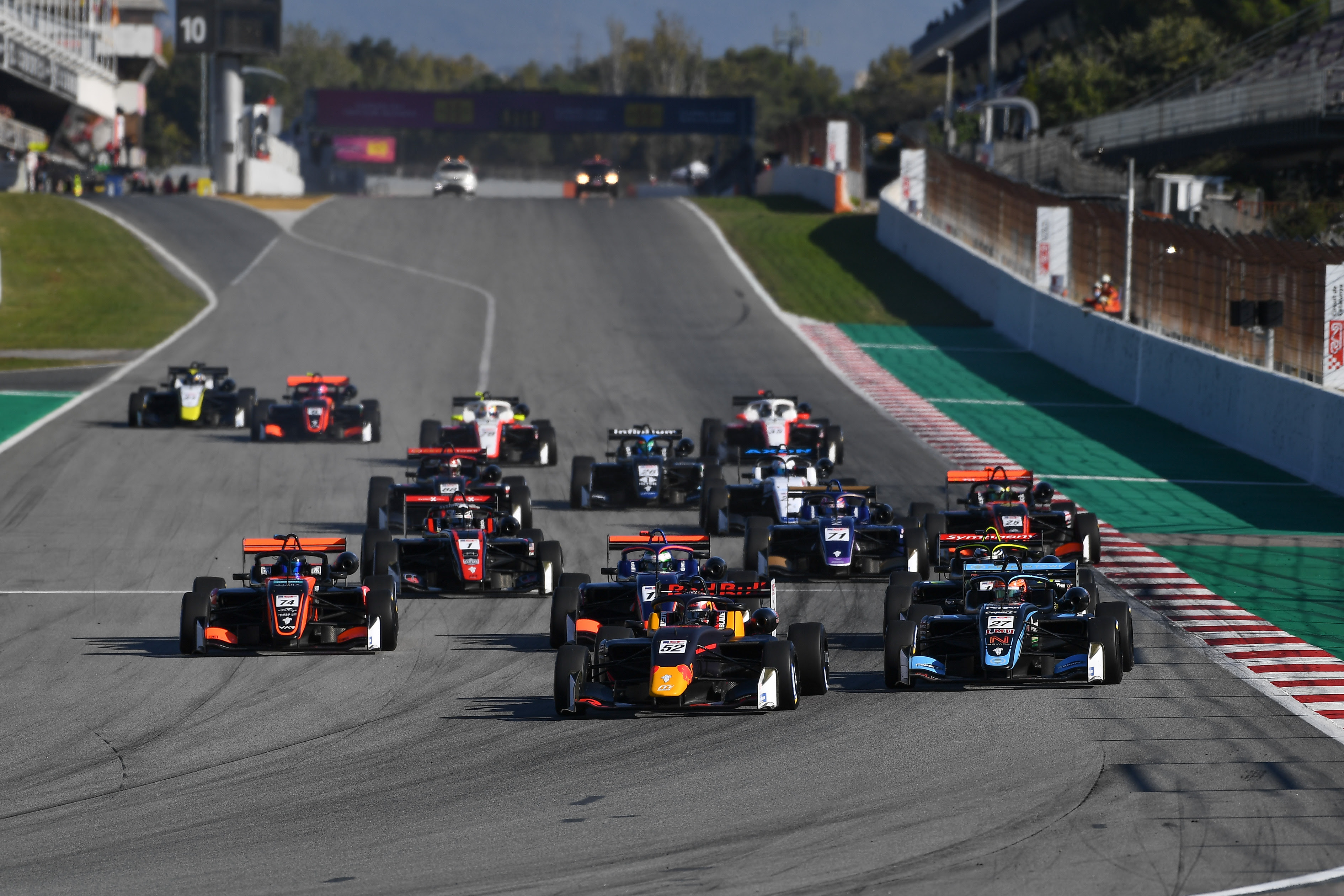 After setting the fastest lap in practice, Crawford qualified sixth – missing out on securing the pole for the first time in five attempts this season.

“I had an issue with the engine in qualifying,” he said. “Basically, we think there was a sensor that had gone wrong, and it was feeding false information to the engine. We were down on power, and we didn’t quite nail the setup for the conditions. But there was still quite a good recovery! I had the pace all weekend, and we were the ones to beat, although the issues in qualifying set us back.”

Falling to seventh on the opening lap, he regained sixth on Lap 3 and held that position for the remainder of Saturday’s race. That proved to be critical, as the top six finishers would be inverted for the Sunday morning race. 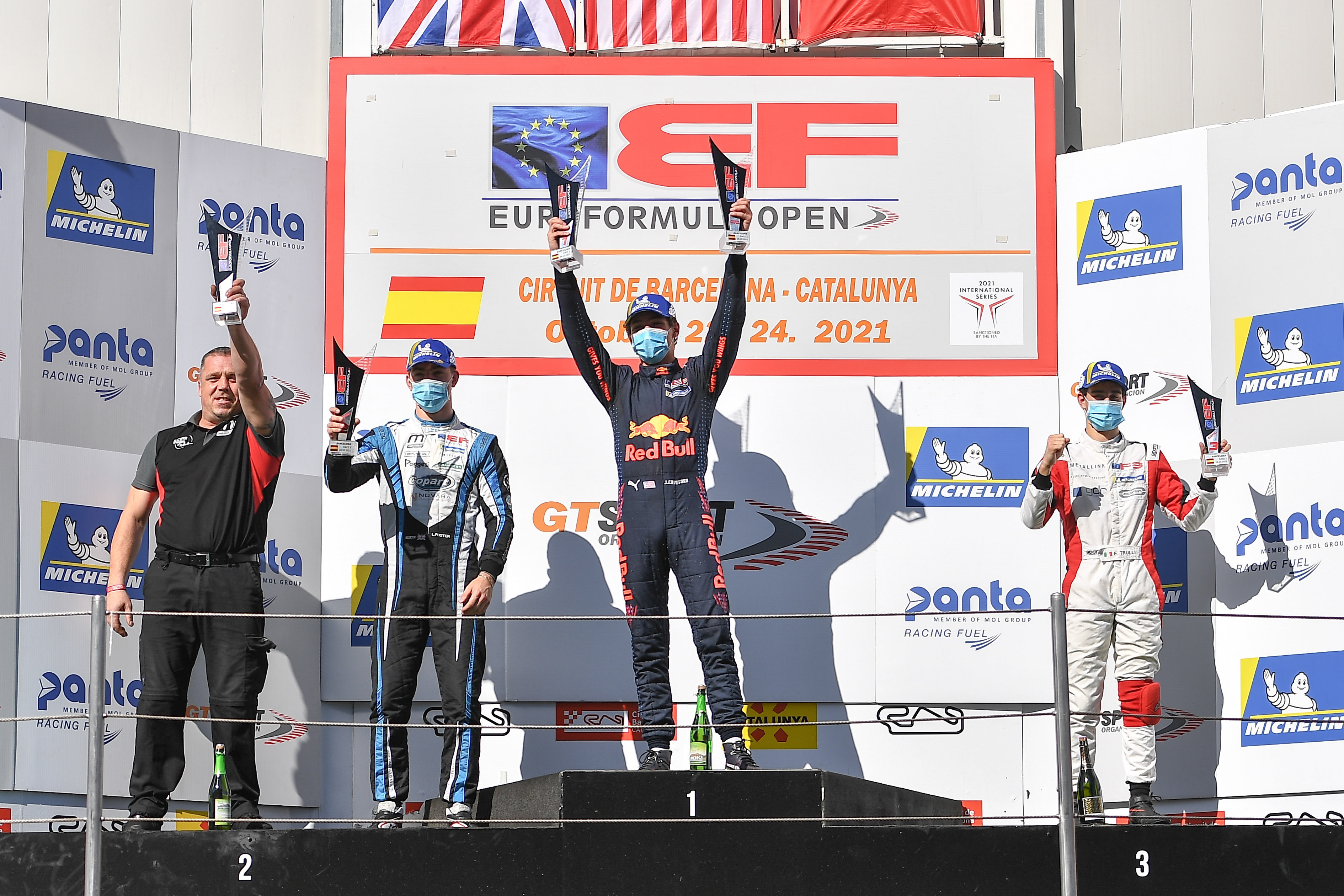 “We knew going in that we would have to finish sixth,” Crawford said. “That’s what was going to change our weekend, and we ended up with two wins. But in the end, it’s almost a good thing [to finish sixth], because it would have been really hard to overtake and get fastest lap in race two if I had won from pole in race one.”

The top-six inversion put Crawford on the pole for Sunday morning. While he led every lap, he managed to survive final-lap drama when problems with the electronics caused his gearbox to fail exiting the final corner. He held on, although a once-comfortable lead of 1.256-seconds was reduced to a mere 0.168-seconds at the checkered flag.

“It wasn’t that easy at all,” Crawford said following the race. “I had a really good start. I got the fastest lap at the beginning. But halfway through,  I started to suffer with gearbox issues. It was shifting up as I was trying to shift down, and I started to fall back a bit. Then it seemed that the issue was fixed. I was trying really hard to manage it – staying off the curbs and everything. 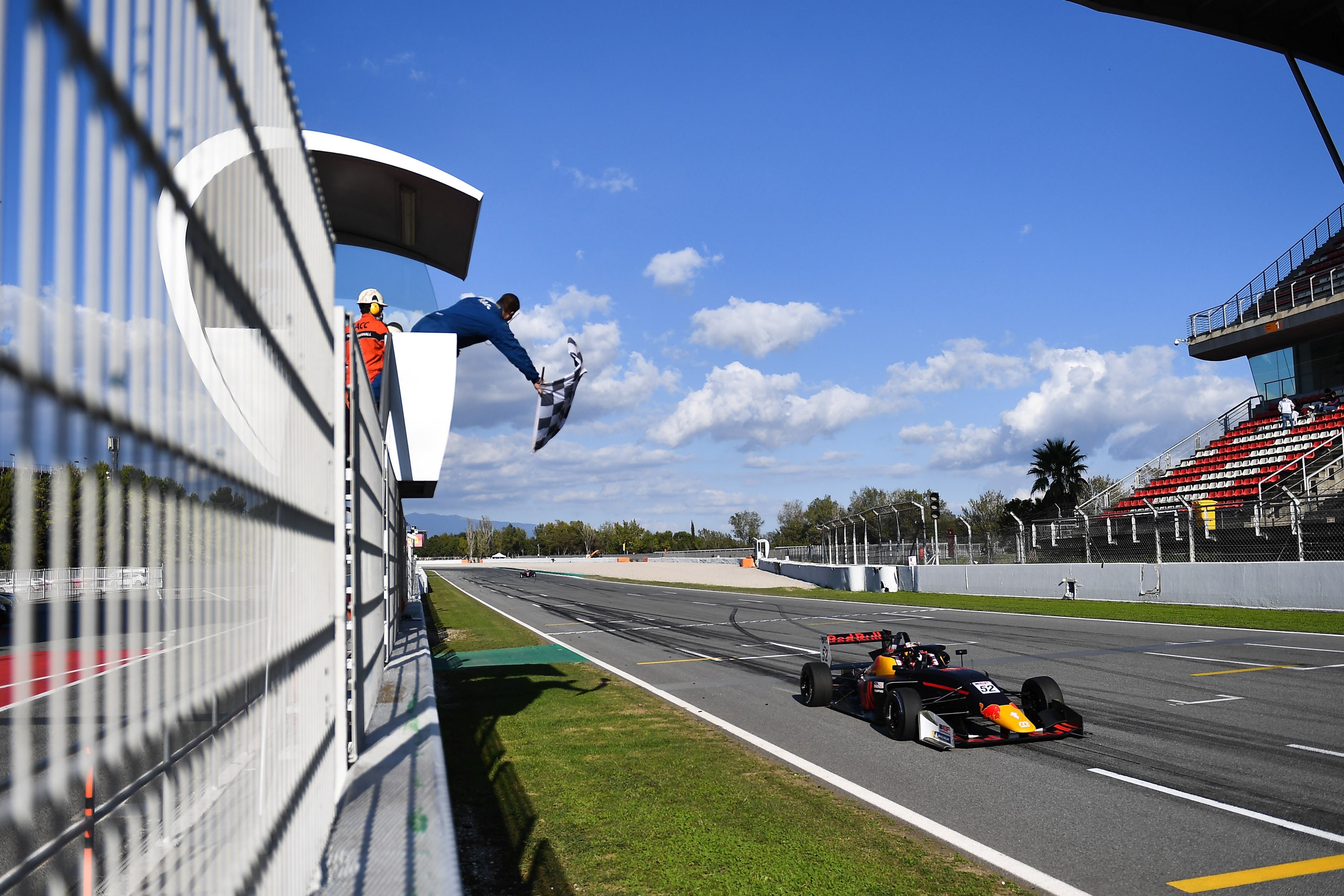 “Then on the final lap, I got the issues really big,” Crawford continued. “Out of the last corner, it went all the way to sixth gear from second. I thought I was going to get beat, but man, I got really lucky!”

Turning a lap of 1:36.779-seconds on Lap 3 was the fastest lap of race two, good enough to put Crawford on the pole for the final 18-lap event. This time, there was no drama. After briefly going side-by-side with newly crowned champion Cameron Das in Turn 1, Crawford pulled to a one-second lead, and gradually pulled away – again setting the fastest lap in the process. At the checkered flag, he beat Das by 2.036-seconds in a 1-2 finish for young Americans.

“It was a more simple race,” Crawford said. “I managed to pull a gap early on, and stabilized the gap from there. I think I made one mistake in the race, but overall I think it was a great weekend despite the issues in qualifying.

Next year’s FIA F3 season starts on November 1-3 with official post-season testing in Valencia, Spain.  While Jak’s 2022 plans are set, the official announcements will not be made till later.

“The 2021 season is over and I am excited for next season,” said Crawford.  “It is clear I have to step up my F3 game next year but the expectations are not just part of the programs I am in, they are also my own expectations.  I will use the off-season to reflect and prepare and we will be ready when racing starts in 2022.  Every new year is a bigger year.”

After the test, Crawford hopes to be back home in Texas in early November after a karting race in Las Vegas.

“It’s been awhile since I’ve spent a lot of time at home,” he said. “I’ve only been back for a couple of weeks at a time. I’m excited to get back and be able to relax, because it won’t be long before next year’s season gets started.” 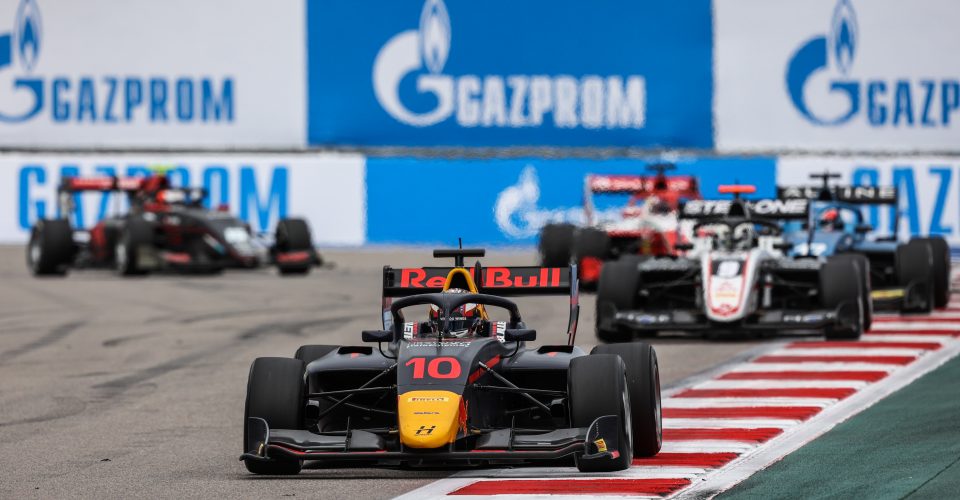 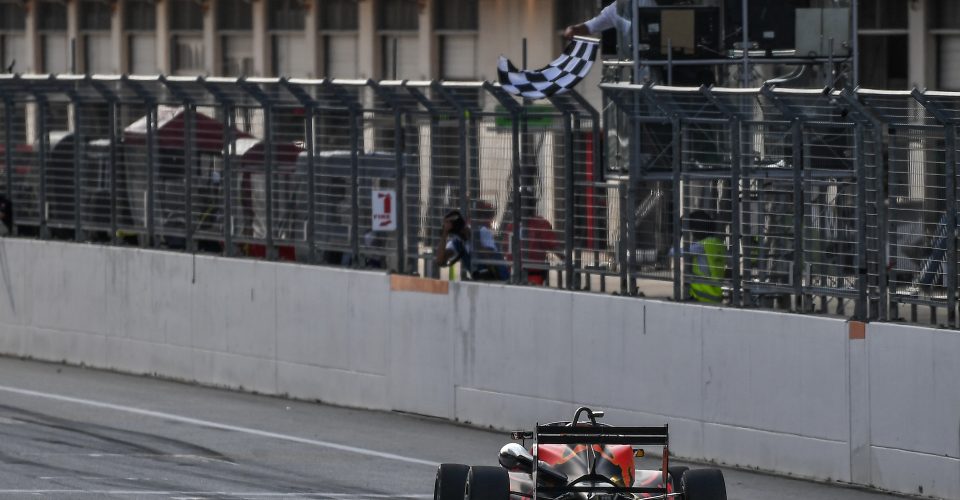 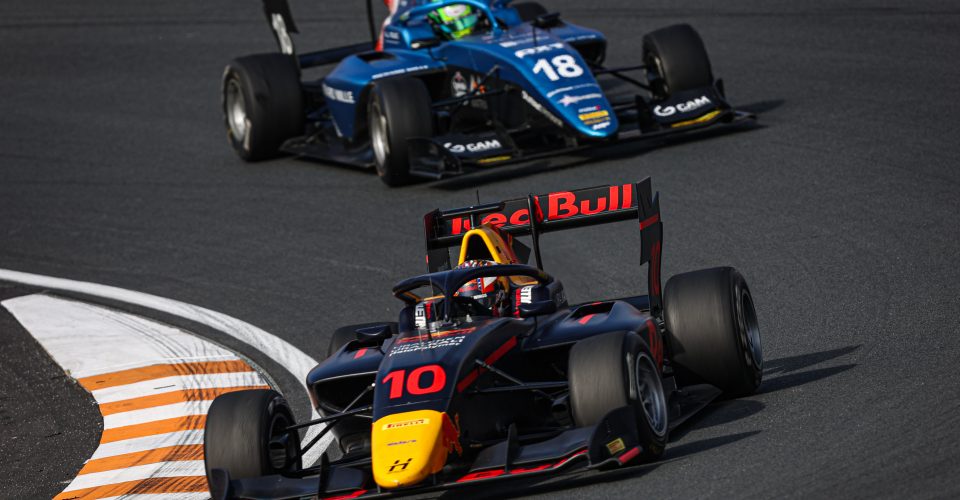