Double Podium for Round 3 Racing at Road America

Round 3 Racing Heads to Road America

Double Podium for Round 3 Racing at Road America 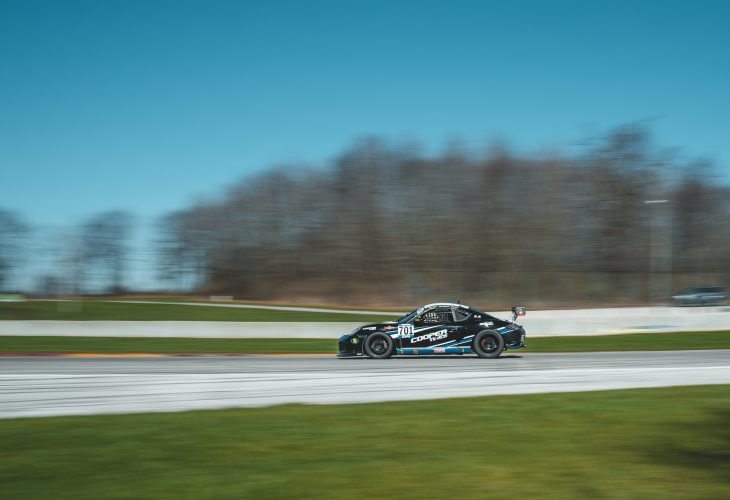 Elkhart Lake, Wis (9 May 2022) – Looking to add to the team’s promising start to the 2022 World Racing League powered by Hagerty season, Round 3 Racing (R3R) took to the National Park of Speed to do battle with all four cars this weekend with a double-header at Road America. The high speed Wisconsin circuit put the R3R fleet to the test, but the team emerged from the weekend with two podium finishes despite a challenging event. 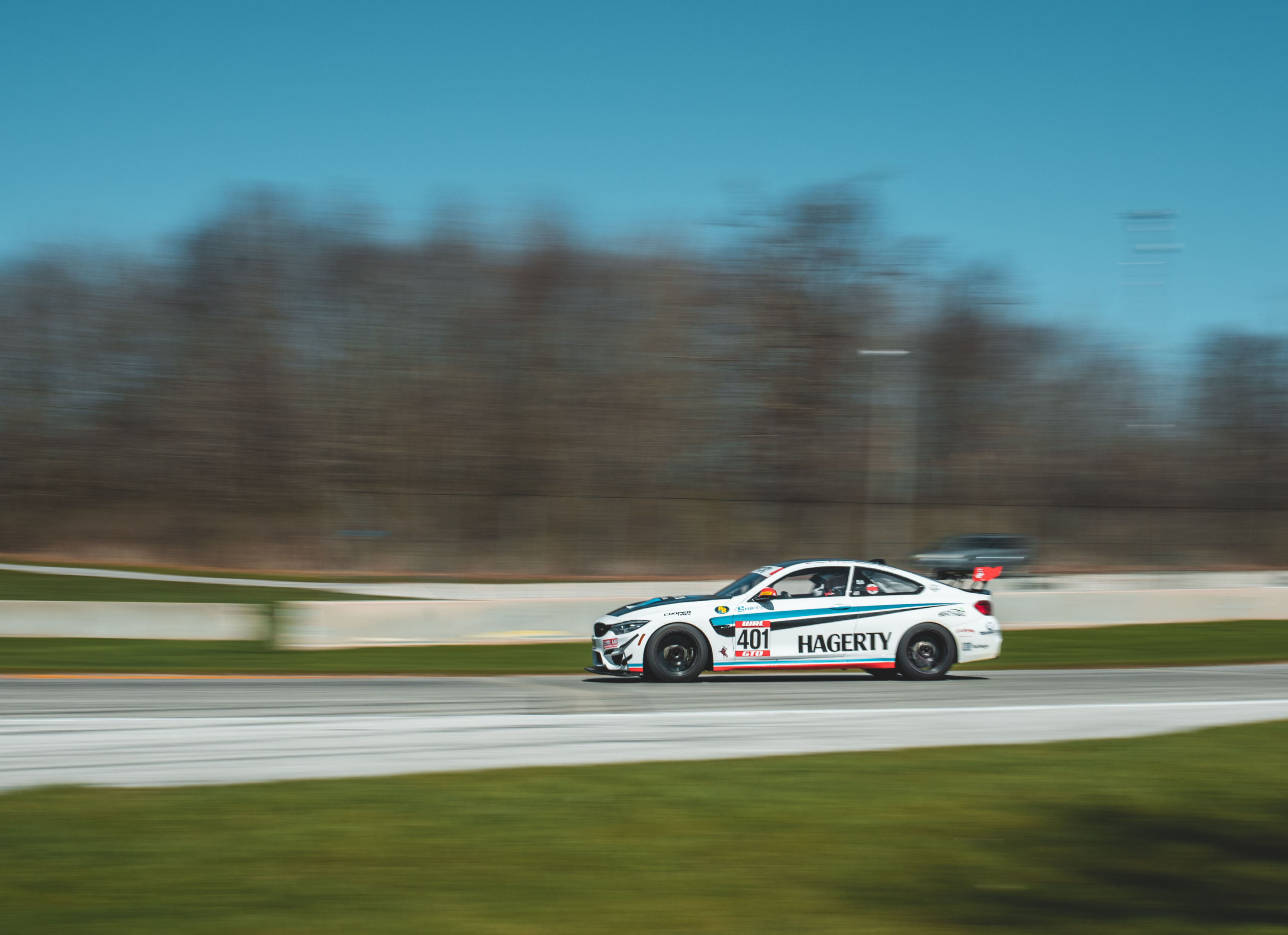 The No. 401 team started on pole Saturday after Cole Loftsgard ran the fastest lap on Friday. Loftsgard led the team in the first stint before handing the car over to Brad McCall. After a red flag incident, the team came in under yellow for fuel and for Sarah Montgomery to take the wheel. Sarah fought to the finish, ending the race in second. Unfortunately, the team ran into post-race inspection issues, causing forfeiture of their race result. While the outcome was a disappointment, the small infraction left the team looking forward to once again performing on Sunday.

In race two, Montgomery brought the car to eleventh from the 29th starting position before bringing the car into the garage due to the engine overheating. The weekend that showed so much promise for the squad once again delivered disappointment, as the entry was forced to retire just two hours into the race.

“It’s tough to put the disappointment of this weekend into words,” states McCall. “Going from the incredible high of capturing pole position to finishing 2nd on track, only to have it taken away in post-race tech, was incredibly painful for the whole team. The crew and drivers work so hard and put their heart and soul into these events. I guess the consolation is knowing that we have the team and the car to compete for wins at every race. We’re going to shake this off and look forward to a big comeback at Daytona.” 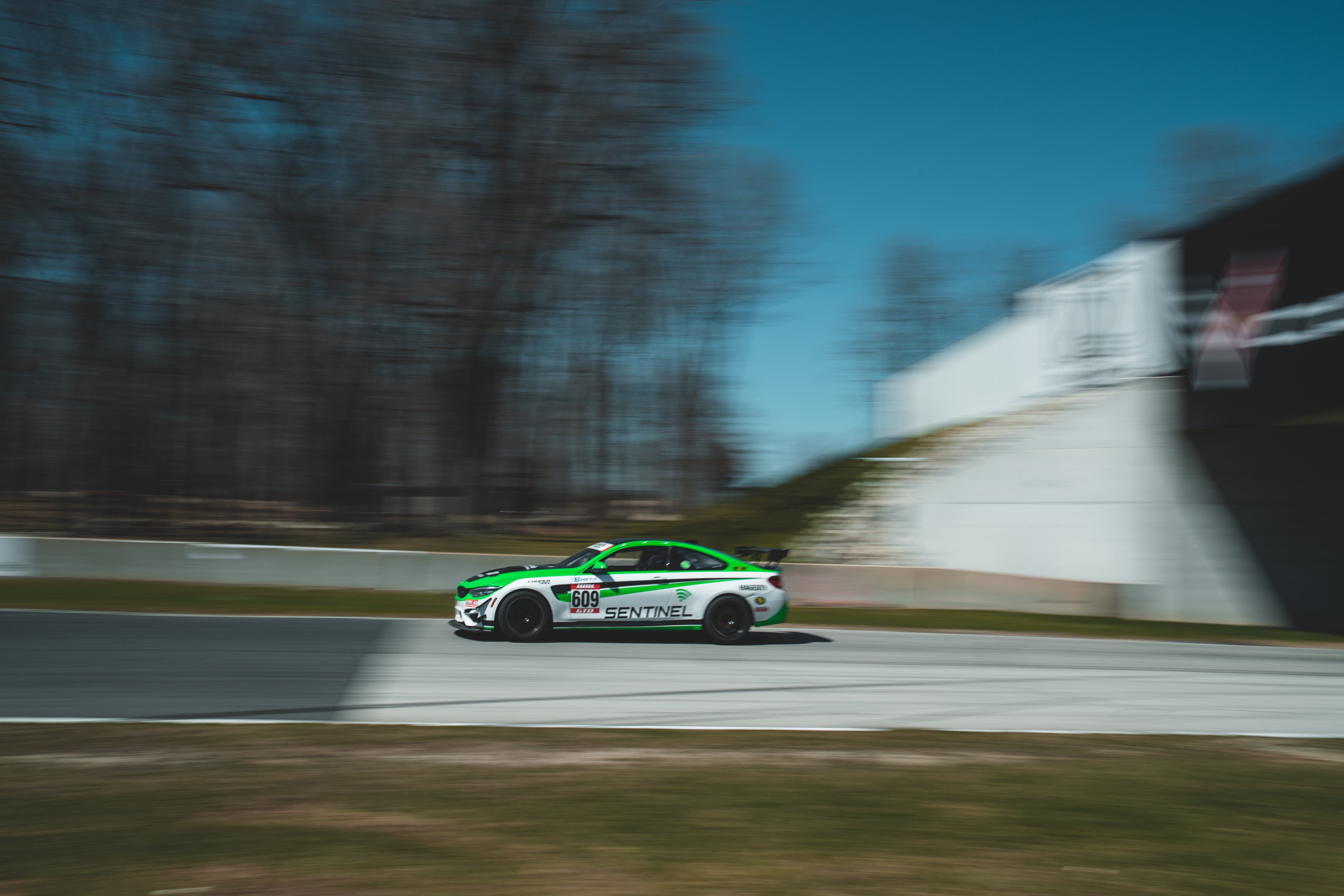 The No. 609 team launched the effort at the National Park of Speed from the third starting position. James Candelaria, Brian Ghidinelli, and Christian Maloof kept the car in the front of the pack. But the champagne aspirations were derailed by an engine failure with less than two hours left to run. The setback saw the No. 609 Sentinel BMW step aside from competition for the rest of the weekend.

“Despite a lot of hard work from the mechanics and crew, both in the shop and at the track, we had a problem in the race and weren’t able to run on Sunday,” said Maloof. “My teammates and I never put a wheel wrong, driving clean and smart to ensure we would have a good car for the end. I cannot hide my level of disappointment on the unfortunate amount of bad luck we seem to be having.” 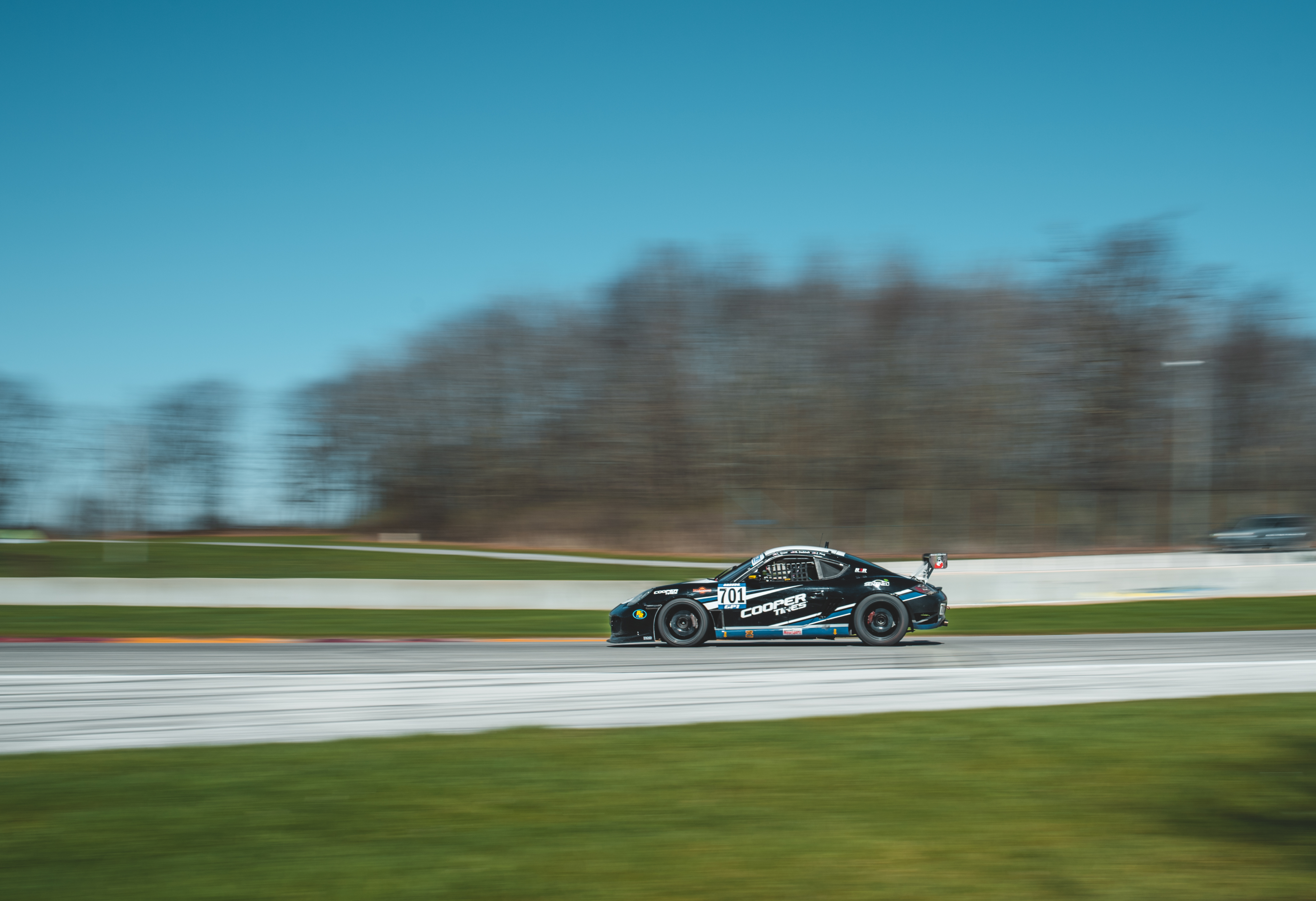 Mo Dadkhah, who hails from Chicago and is quick to claim Road America as his home track, started the first stint on Saturday. Dadkhah kept the car in a top position before passing the 701 Cayman to Zack Ping. Saturday’s  race didn’t play out as planned as the runners were halted by a red flag, initiated by an off-track excursion for Ping as he went off at the Kink.  The incident forced the car out of the remainder of the race.

Determined for a rebound, the 701 Cooper Tire team returned for vengeance on Sunday. Loni Unser started the first stint in fifth. Due to an exhaust issue, the car had to make its way down pit road a couple of hours into the race. Ping was next in the Cayman, helping make up time lost earlier in the race.The teamwork and focus on a strong result went all the way to the breathtaking closing moments of the race, as Dadkhah brought home a second-place finish by three-hundredths of a second over third place.

“That last stint was one of the most fun stints I’ve ever driven in a race car,” said Dadkhah, who has used ambition, talent and hard work to build a career both on and off the track. “The car behind me did a great job of coexisting with me. We went back and forth quite a bit. We were only three-one hundredths of a second ahead of him, and the car was running out of fuel!” exclaimed Dadkhah.

“From everything that has happened this weekend, with the accident in the kink yesterday (Saturday) and the exhaust that broke off due to someone hitting us today, it was a nice, fun surprise to earn P2. Thank you, Brad, Buz, Marc, Aaron, and everybody else at Round 3. These guys work day and night to allow us to be able to fight for a podium; they are the heart and soul of the team.” 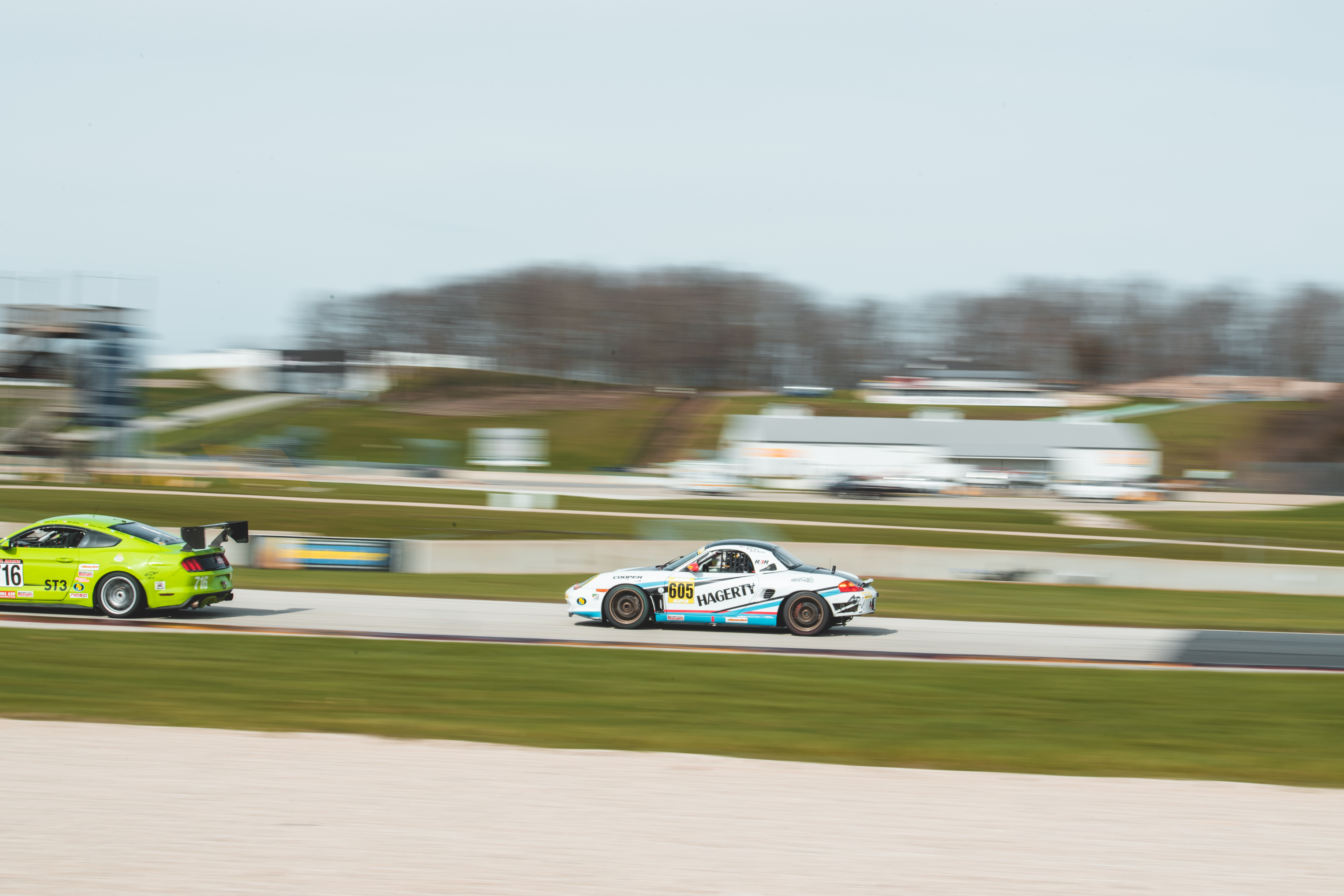 The No. 605 team, made up of Carter Pease, Dennis Neel, and Buz McCall from the pole position, maintained the top position throughout the race. Facing challenges of three red flags, the team persevered to bring home the first-place trophy in the GP3 class on Saturday.

After having the fastest lap in their class, the 605 Hagerty Drivers Club Boxster started on pole for the second day in a row. The car ran into a power steering issue early in the race but was able to rebound to finish fourth from falling to tenth.

“Luck was not on our side today as a group. The 605 car had a power steering issue early in the race that put us nine laps down and last in class,” expressed Pease. “The team was able to get the issue diagnosed and repaired quickly to get us back out on track. Dennis, Buz, and I put it all out there to get laps back and came home with a fourth-place finish, an amazing comeback for the team.”

Round 3 Racing will compete next on June 10-11 at Daytona International Speedway as the World Center of Racing plays host for a fourteen hour race. 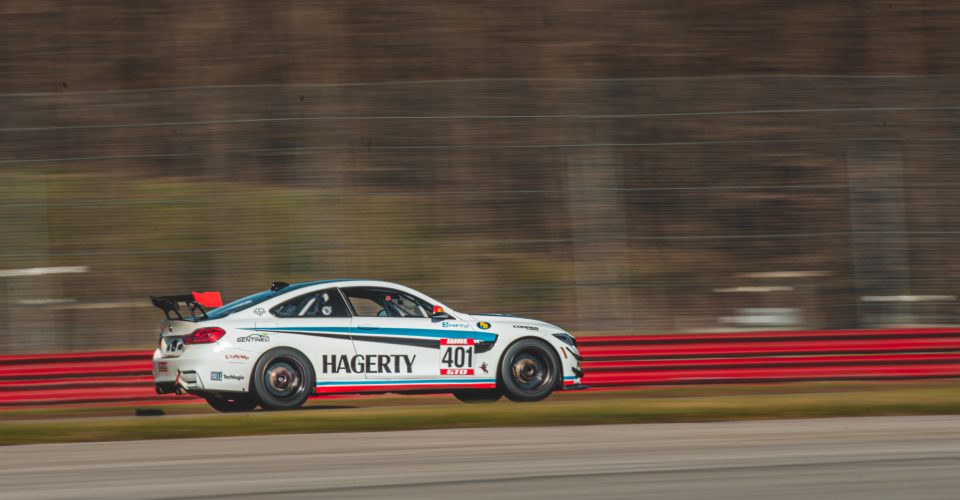 Round 3 Racing Heads to Road America 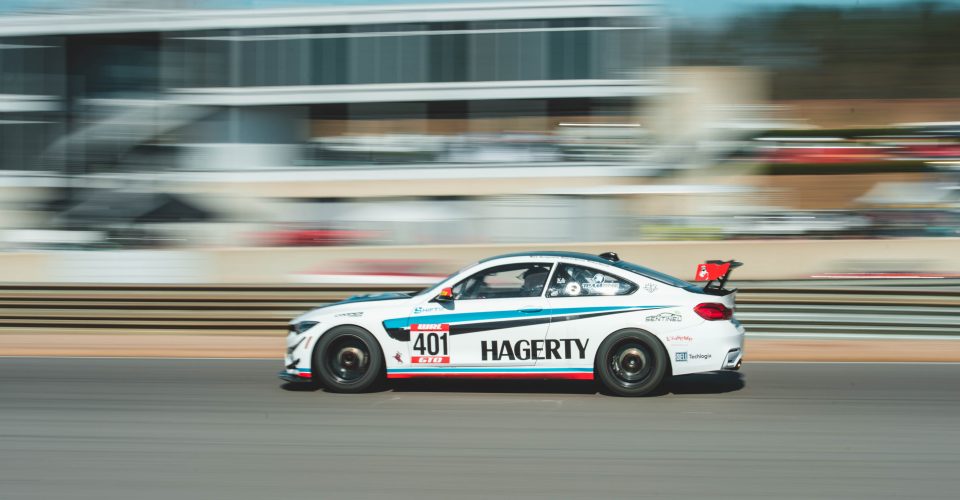 Round 3 Racing Ready for Mid-Ohio Double-Header