Sunday Group Management utilizes team members with creativity, drive, and a diverse skill set. Founded in 2003 by Matt Cleary after a successful effort as head of Competition Public Relations for the then-thriving Skip Barber Racing School, Sunday Group Management has steadily grown based on the firm’s strong network of relationships, remarkable work ethic, integrity, consistent follow through, and high-quality written content. With clients that include race teams, event sponsors, and race drivers, Sunday Group has established a reputation for excellence. 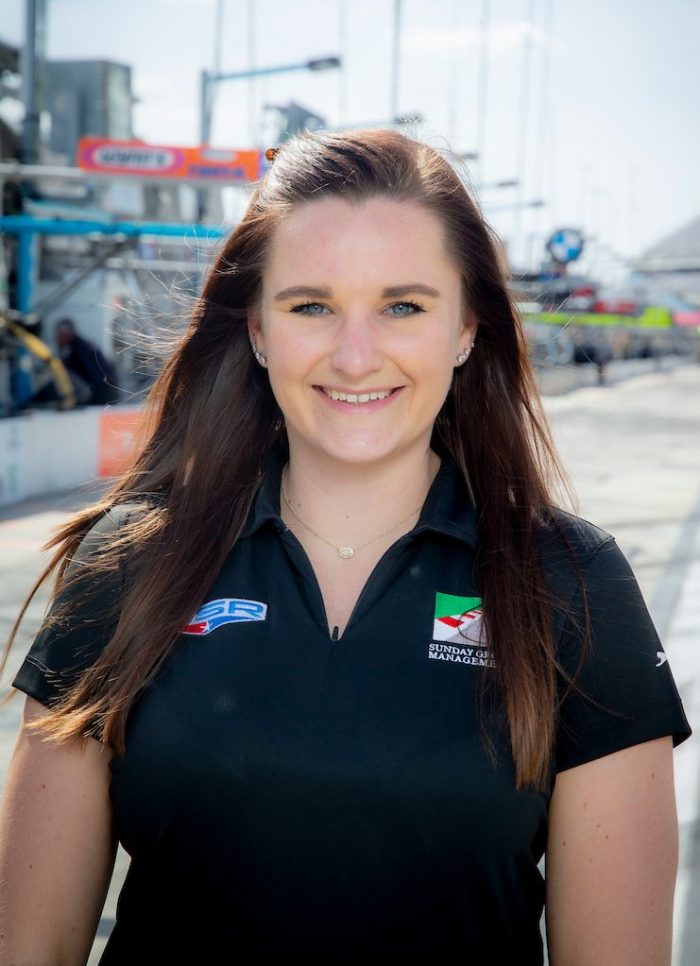 Being a part of racing was inevitable for Maddie as she grew up at the race track watching her dad race cars which transitioned into her racing karts for nine years. As she attended University of Colorado at Boulder, Maddie began to pursue a career in motorsports. The summer after her Freshman year of college (2012) Maddie pursued an internship with IndyCar team, Andretti Autosport as a Public Relations and Client Services intern, also being a part of the team's season championship win with Ryan Hunter-Reay. Maddie then pursued several other internships at, National Speedway Directory (Chicago), Influence Associates (UK), and RaceTech Magazine (UK). Maddie's most recent internship brought her to Salzburg, Austria where she worked at as a public relations company taking care for European Formula 3 drivers' PR.

Once graduated, Maddie worked at Philadelphia company Turn5 Inc., as a social media and Public Relations Coordinator working for American Muscle and Extreme Terrain. Maddie first joined Sunday Group Management in 2016 at the IMSA season finale at Petit Le Mans, which also saw Meyer Shank Racing win the team’s final race in Daytona Prototype competition. Maddie has grown her responsibilities with Sunday Group to execute the overall communications (digital media, video production, media content) plan for Meyer Shank Racing, as well as having a direct role in the partner activation and program execution for the team’s Indycar and IMSA programs. Having managed the communications effort around MSR’s back to back IMSA championships, Maddie has also been on point for six Indianapolis 500 programs for the team, including the breakthrough 2021 victory with Helio Castroneves. That win kicked off the deployment of a comprehensive post Indianapolis 500 victory media plan, which included national media tours, bespoke logo creation and deployment, scheduling countless media interviews, and maximizing the opportunity that the victory helped to create for MSR. 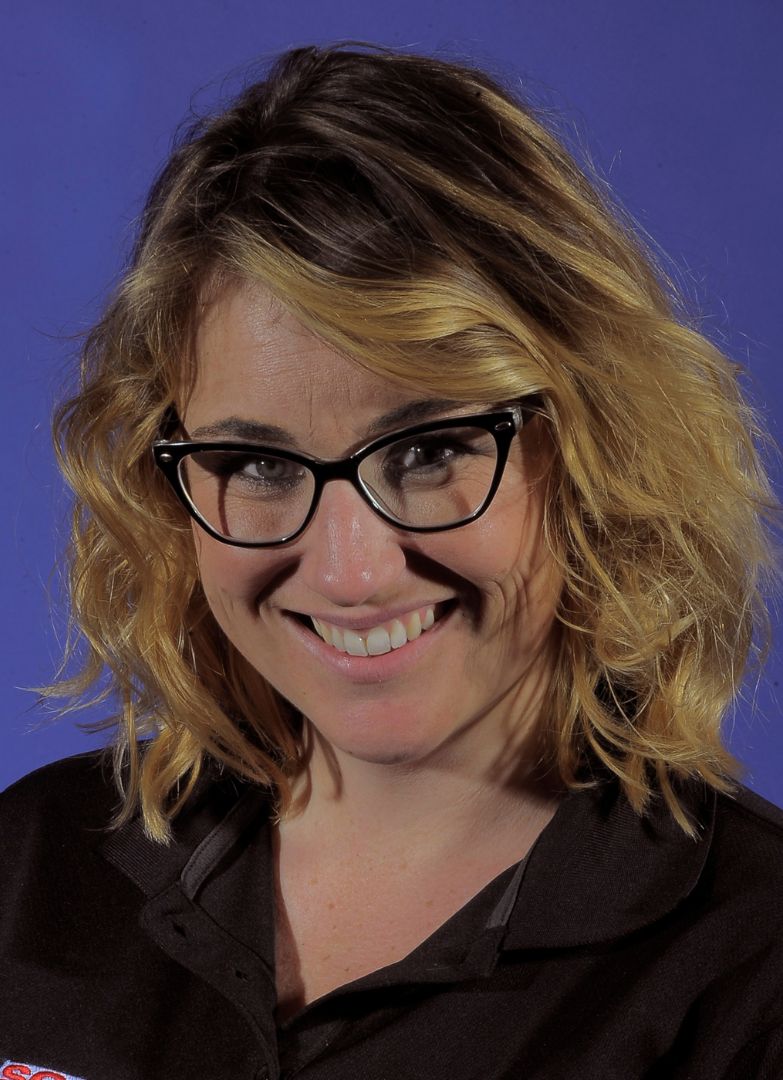 Amy’s path to motorsport is a bit unconventional compared to her SMG colleagues. Graduating from Ball State University with a BA degree in Advertising from the Journalism Department, Amy began her professional career in radio, writing and voicing radio commercials, creating promotions and designing client-focused campaigns. It was there, she was introduced to racing by the local and national programming that the station managed for ESPN and other Talk Radio stations. In a true trial by fire, Amy filled in last minute for a local 30-minute racing talk show as the host. Since she had minimal racing knowledge, she focused on the media, marketing and advertising side of motorsports from a fan’s prospective. After hearing the show, the local short-track owner offered her a job overseeing the track’s event planning and marketing, selling tickets and sponsorship, planning and designing advertising campaigns and overseeing community outreach and hospitality along with planning specialized race-night events.

Her outsider’s approach to motorsport brand management gained her recognition from the nation’s largest sanctioning body, the Sports Car Club of America. SCCA Pro Racing was debuting a new formula racing concept to the United States (F4 U.S Championship) and added a position for a Communications Director. She accepted the opportunity and from there helped launch the most successful F4 program in the world. After the success of F4, Amy worked closely with ACCUS and the FIA to launch F3 Americas in the United States. Her tenacity, forward thinking and get-things-done attitude, brought her to join Sunday Group Management in March 2019. Since then she’s served as the Race Series Media Relations Manager for the Trans Am Series presented by Pirelli and the Idimitsu Mazda MX-5 Cup presented by BFGoodrich® Tires, and currently oversees Lime Rock Park as the Media Manager. 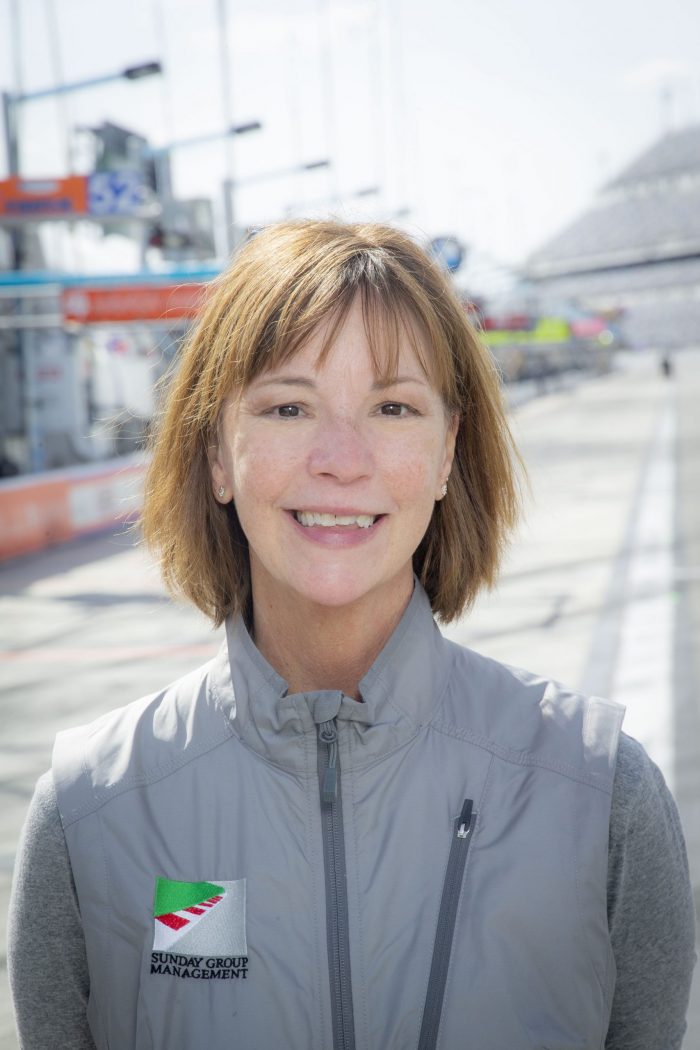 The daughter of parents who regularly spent their date nights at sprint car races, California native Diane Swintal watched her first Indianapolis 500 at age 10 and was instantly hooked. When her inability to speak trigonometry thwarted her plan to become an aerospace engineer, an “A” for her Intro to Engineering report on Apollo 13 triggered a new plan: become a writer. Armed with a degree in Public Relations from the University of Southern California, Diane worked for several public relations agencies before signing on with American Honda in motorsports PR.

After several years, Diane decided to head in a different direction, managing marketing and client relations for Hatch Design Group, a prominent So Cal restaurant design firm. But the racing bug was impossible to escape, and when the International Motor Sports Association came calling, Diane became the IMSA Development Series public relations coordinator. In 2013, she became the PR coordinator for DeltaWing Racing in the American Le Mans Series (now the WeatherTech SportsCar Championship), and in 2014 also began working for Andersen Promotions and the Road to Indy Presented by Cooper Tires as PR coordinator. Diane joined Sunday Group Management in 2016 to support clients in IMSA WeatherTech as well as the Michelin Pilot Challenge. Diane supports Sunday Group clients in IMSA including Sean Creech Motorsport and Stoner Car Care Racing. When she’s not in a hotel, Diane lives in Irvine, California with husband Jim, a racing official and renowned motorsports artist. 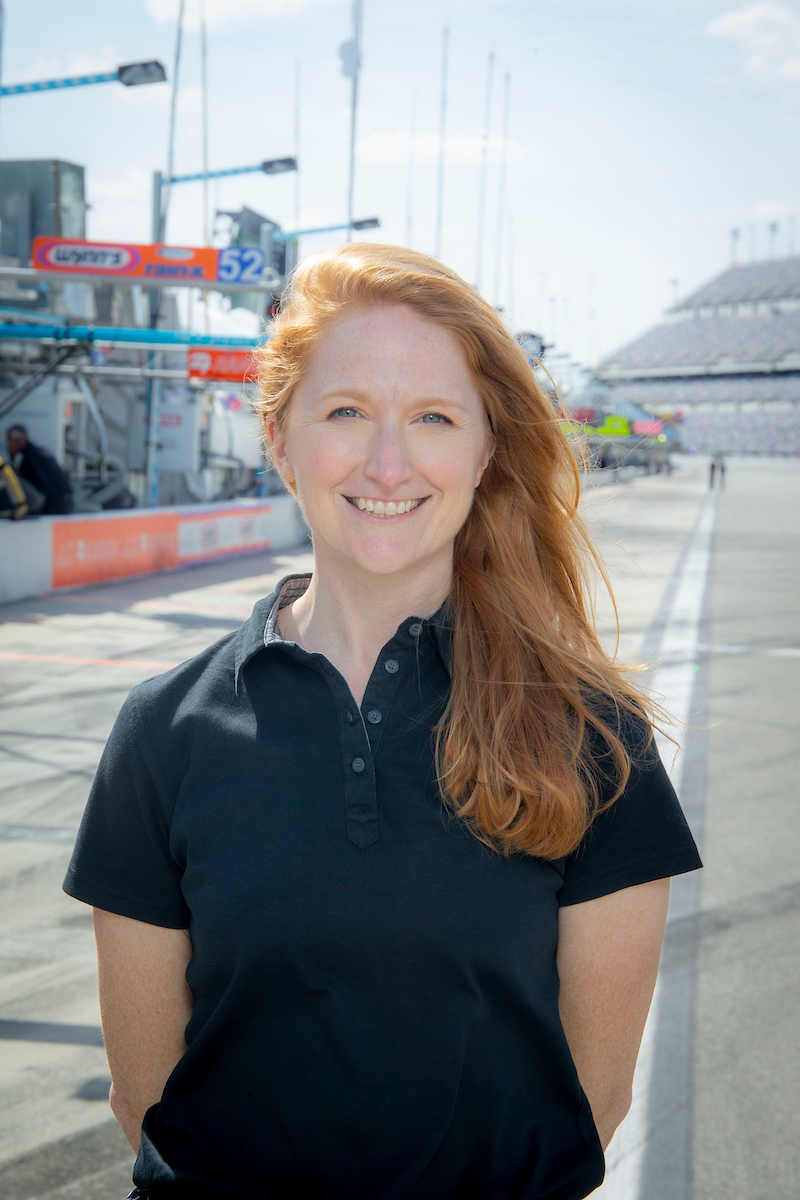 Erin Cechal grew up attending races at Road America, so it wasn't long before she started racing go-karts. Her dreams of becoming the next American F1 superstar were dashed when she realized she wasn’t that fast. Luckily, her karting experience got her foot in the door for an internship at Road America where she worked in the communications department for the 2003 - 2005 seasons. After acquiring her B.A. in Journalism, she was hired as a public relations specialist by the Sports Car Club of America (SCCA) in 2006. She briefly worked for an international motorsports marketing firm before joining the American Le Mans Series (ALMS) public relations team in 2011.

Following two years with ALMS, Erin decided it was time to venture off on her own and work for motorsports clients as an independent contractor. Erin is responsible for the social media, media relations, and on site event content management for Sunday Group with a focus on the Idemitsu Mazda MX-5 Cup presented by BFGoodrich Tires. The role is an ideal one for Cechal, as her involvement with the series stretches back to her early days in the sport at SCCA. 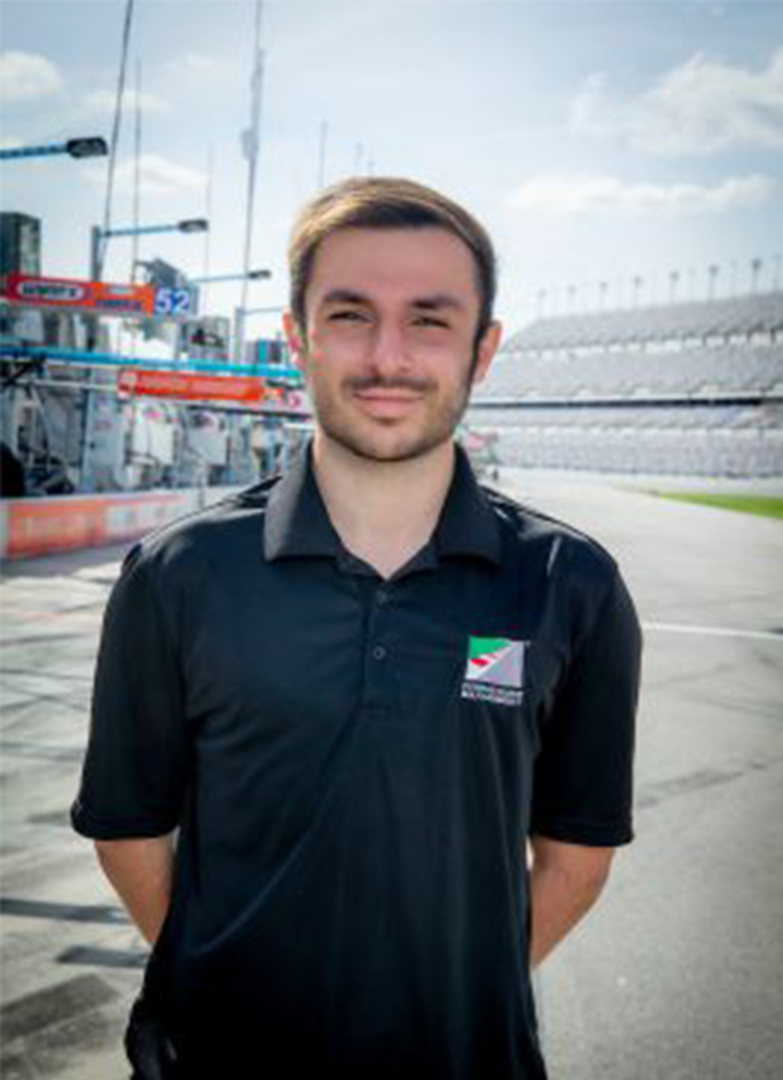 Alex Slupski's first memories of visiting a racetrack with his dad built the foundation for him to become involved in the racing industry. His chosen career path of being a motorsports videographer combined his passions of racing and videography. Alex first began shooting video in 2014 and has continued to develop his skill set with experience shooting commercials and films as a camera assistant for clients such as Mercedes, Hagerty Insurance, and Rooms To Go.

When not at a racetrack, is usually in the woods on his bike, attempting to learn how to surf, or hanging out with his friends and family. 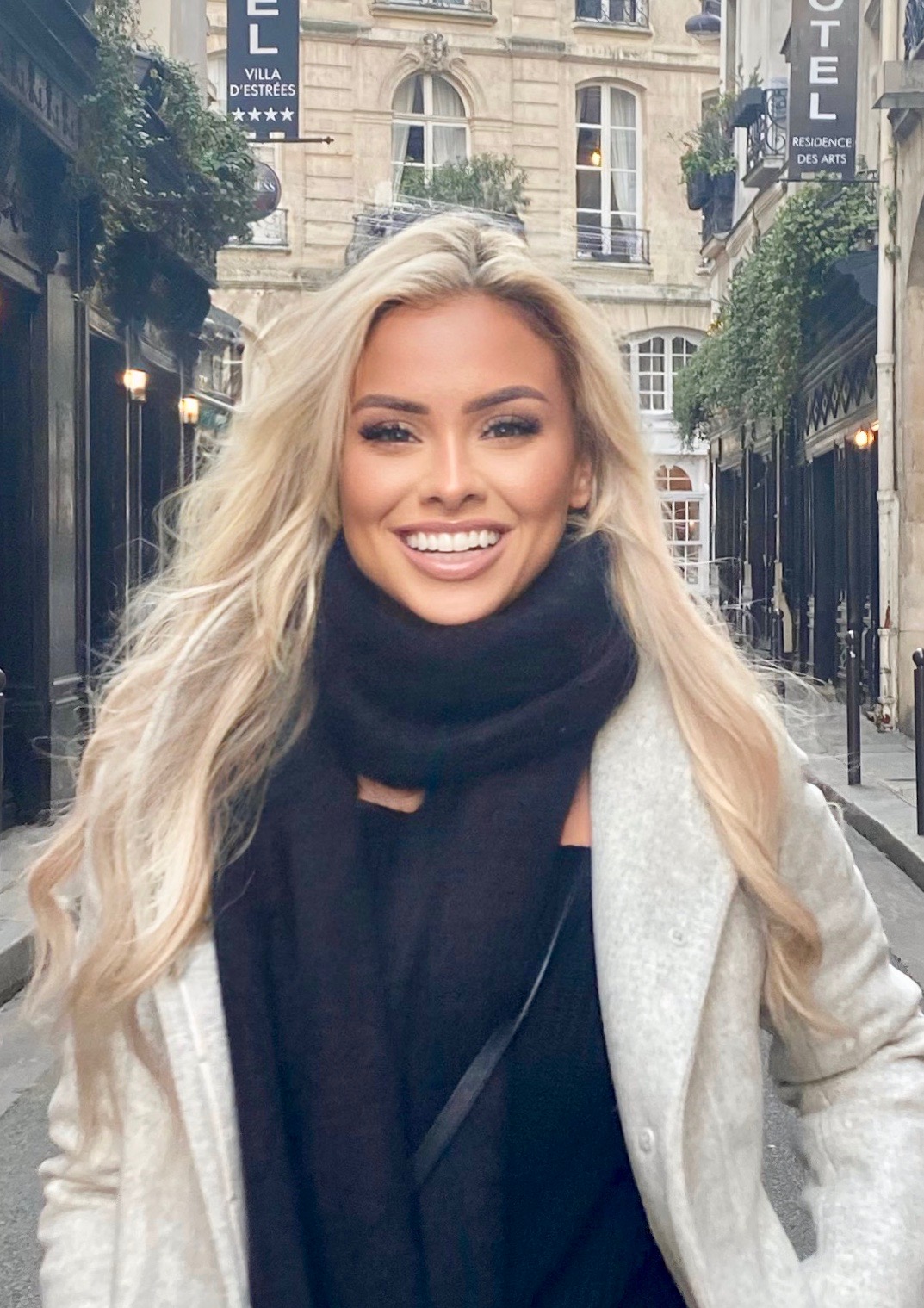 Christin Downey’s interest for motorsports started about 8 years ago during a transition from the entertainment industry at Walt Disney to working in Automotive Brand Experience Events with high performance Automotive Clients such as Mercedes-AMG, Maserati, and Ferrari. With racetracks being the native land for such vehicles, she found herself in good company working with drivers, enthusiasts, and fans who shared a common interest. As she learned about the capabilities of the vehicles and the skills required to drive on the limit, she knew she wanted to pursue further into the racing world, which led her to the IMSA paddock with Torque Media where she focused on her strengths of building relationships, bridging the gap between brands and the consumer, and agency to client. Understanding people, listening to them, and building that bridge is her passion. When she found the best way to add it with adrenaline and octane, it was a dream come true. In October 2022, she was given the opportunity to join Sunday Group Management as the Client Services Manager for Meyer Shank Racing where her goals are to provide exceptional client services with a forward thinking and positive mindset. 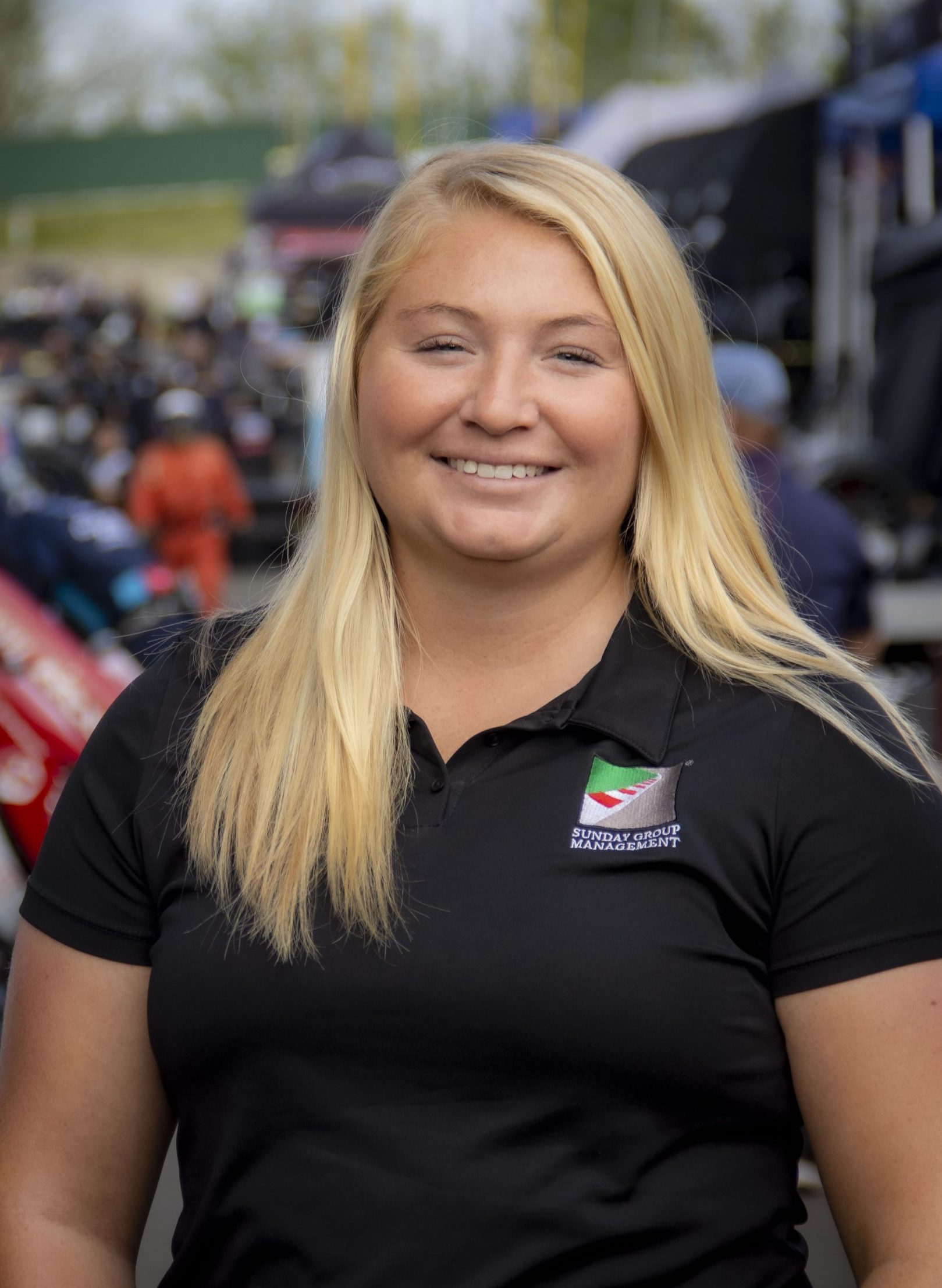 
Haleigh Jordan grew up watching dirt track racing on Fridays and NASCAR on Sundays in Northwest Ohio. Her love for motorsports led to her earning a Sports Marketing and Management degree from the University of Northwestern Ohio.

During the summer of 2018, Haleigh, determined to get as much experience as she could, worked internships at Bay Point Resort and Marina as an events coordinator intern, a social media intern at Fremont Speedway, and a public relations intern at ThorSport Racing. Once the summer ended, Haleigh moved to Charlotte, North Carolina, to complete a social media internship at Charlotte Motor Speedway.

At the beginning of 2019, Haleigh dove into the NASCAR world, working with David Gilliland Racing and On Point Motorsports in public relations. Unfortunately, COVID-19 put her dream to a standstill until she joined Port City Racecars in shipping and receiving before moving to their marketing department. In March of 2022, Haleigh decided it was time for a change and joined Sunday Group Management as a digital content coordinator. 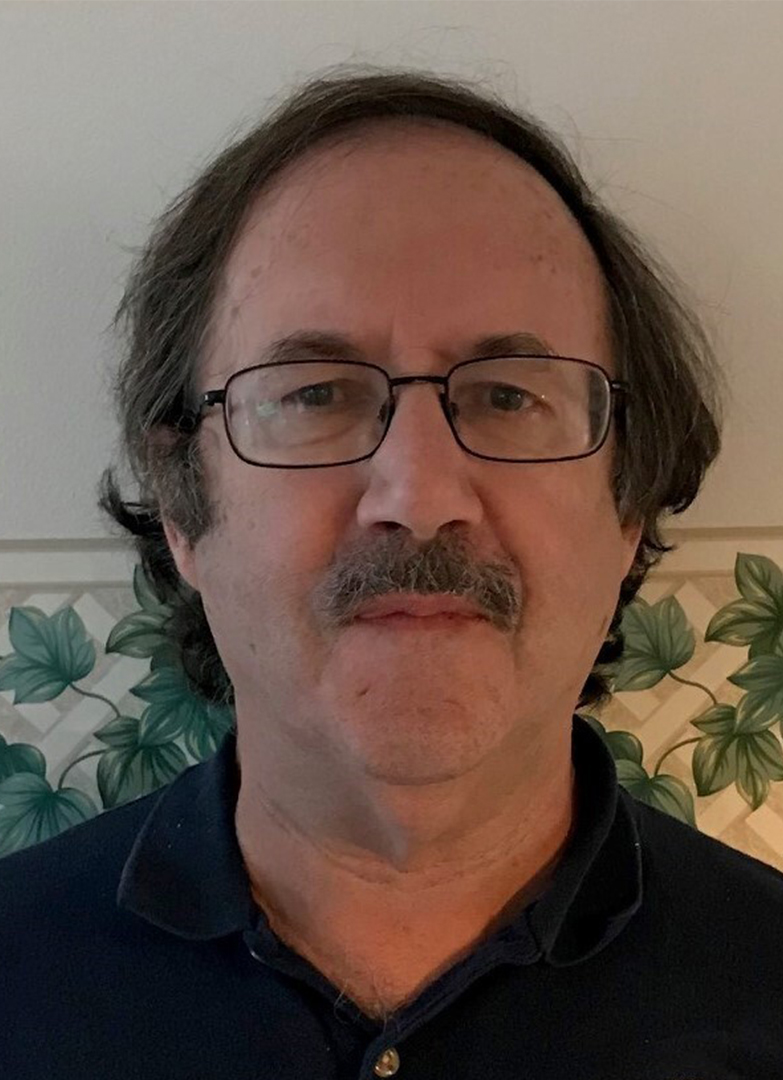 J.J. O’Malley has been covering motorsports in many capacities since 1973. After graduating from King's College in Wilkes-Barre, Pa., he was News Editor for Chris Economaki's National Speed Sport News in 1977. He then began a six-year stint as assistant sports editor for the Pocono Record in Stroudsburg, Pa.

Since 1984, it’s been exclusively motorsports for O’Malley. He was media director for Watkins Glen International when the circuit reopened, and then joined Homestead-Miami Speedway as public relations director in 1998.

O’Malley moved to ISC headquarters in 2001 as news editor for ISC Publications, and was involved with Grand-Am Road Racing since its debut in 2000.

He is also an active member of the Knights of Columbus, with responsibilities that include his role as Florida State Council Public Relations Director; Executive Assistant to the Florida Master of the Fourth Degree; District Deputy; and Assembly Color Corps Commander.

O’Malley has also completed the Boston Marathon 12 times, and finished fifth overall in a race up the steps of the Empire State Building in 1982. He resides in Port Orange, Florida, with his wife Suzanne and daughter Erin. 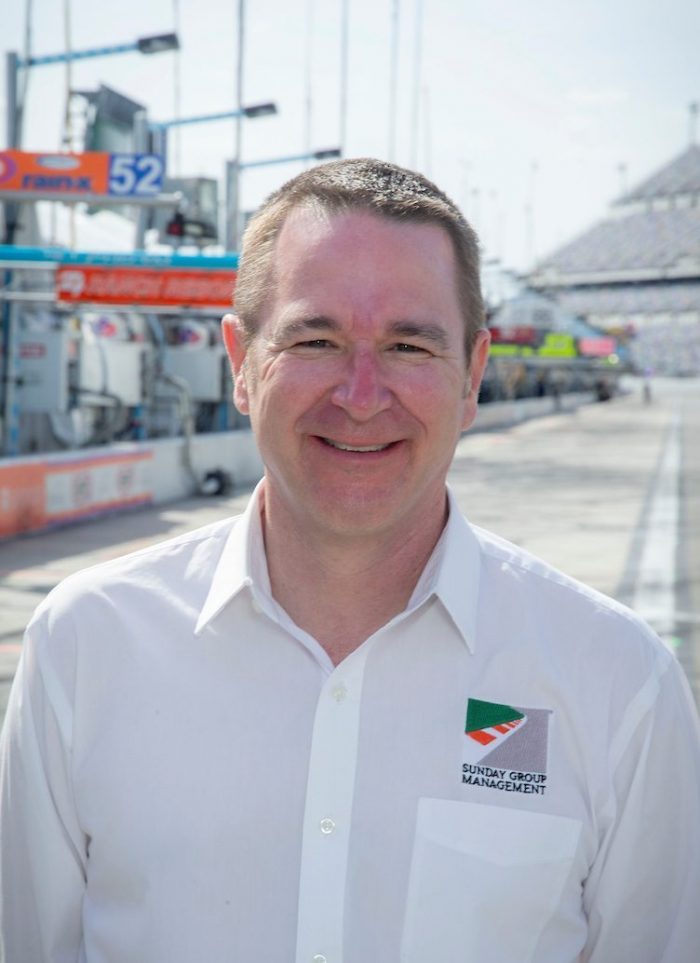 Armed with a degree in Literature from Hamilton College, Matt jumped head first into the real world. Soon after completing his Management Training program, he landed a job at Skip Barber Racing School. That interview included being tossed the keys to a Viper for him to show what he could do behind the wheel. Fortunately, it went well.

A move to the IndyCar ranks saw him join the traveling circus to focus on a different aspect of the sport, managing and developing partnerships to focus on creating value for those involved. Cleary also gained experience on the hospitality side of the sport as well as working as an instructor for Skip Barber Racing School’s SPG programs before starting Sunday Group. Cleary has also played the part of journalist, writing for Autosport, RACER Magazine, Formula Car Magazine, and SPEED.Com.

Fun Fact: Despite maintaining a perfect record of losses in Pinewood Derby competition, Cleary earned his Eagle Scout badge on the final day that he was eligible for the honor, foreshadowing his usually positive reaction to deadlines.