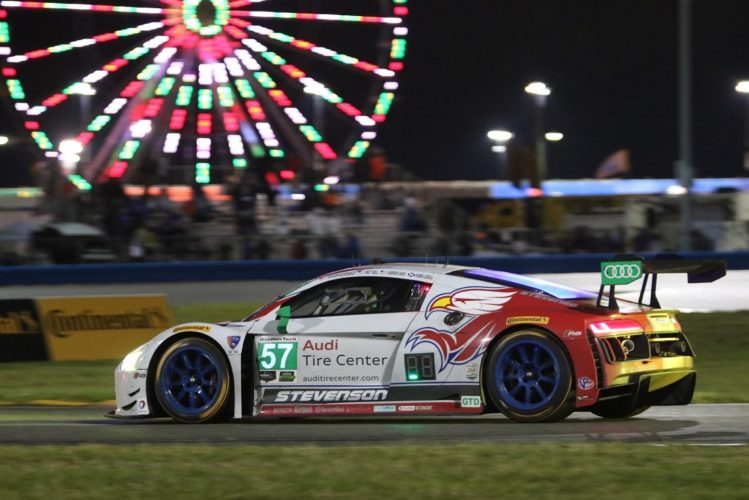 Daytona Beach, Fla. (29 January 2017) – In  their second Audi appearance at the Rolex 24 At Daytona, Stevenson Motorsportsdelivered in challenging circumstances, running in podium contention for the majority of the twice around the clock event before coming up just three tenths of a second shy of a podium finish.

With an IMSA Continental Tire SportsCar Challenge Championship title and scores of podiums and wins to their name, Stevenson Motorsports has actively developed a formula for success that starts with hard work. With a huge field of closely matched GTD machines, unseasonably cold temperatures and over 10 hours of rain, the 2017 edition of the 24 was one of the most challenging on record. 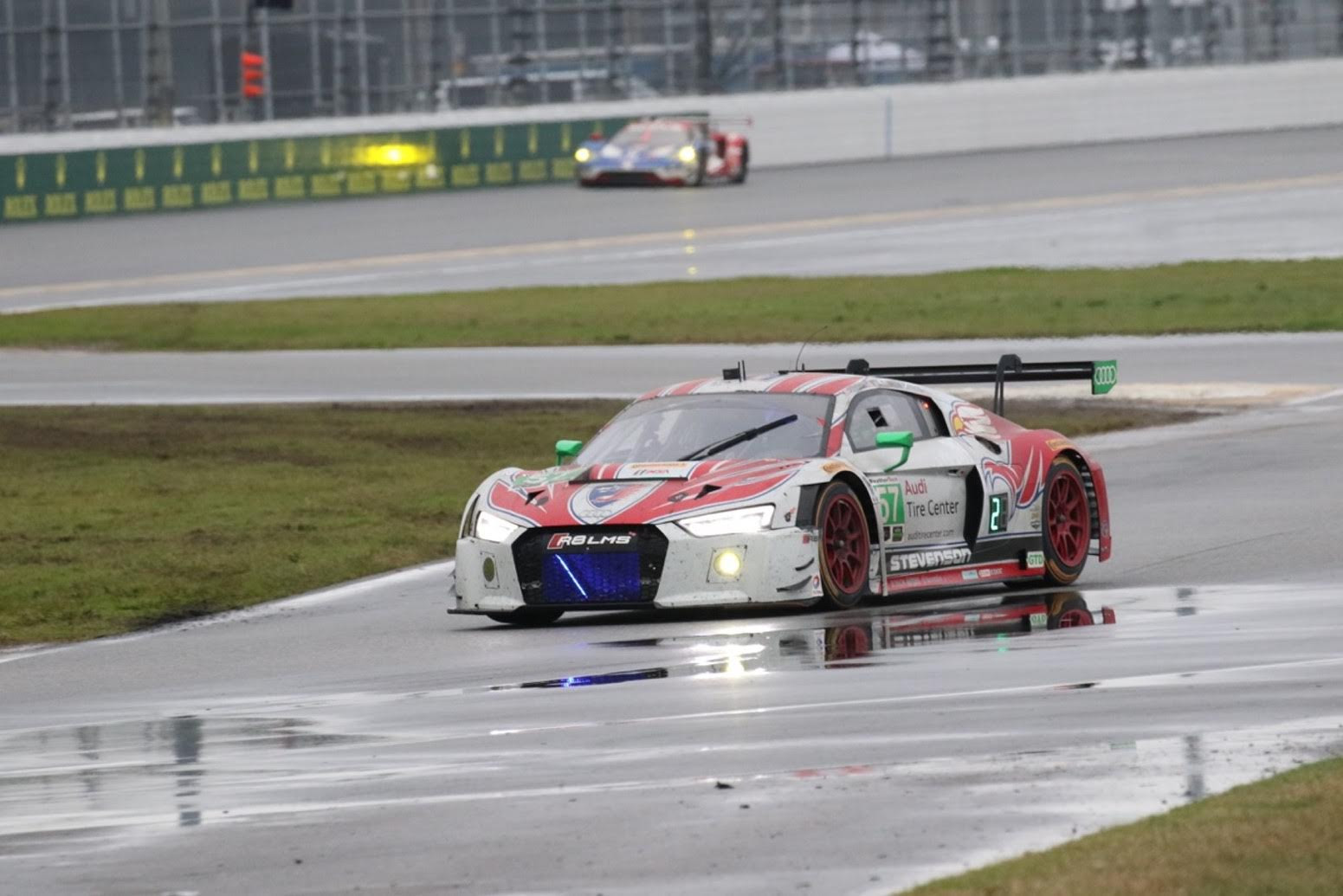 have ever seen and I have been doing this a long time,” explained team strategist Mike Johnson after the race. “Those conditions that the drivers and the crew had to go through, 30 to 40 degrees outside, and driving on ice for 10 hours was just unbelievable. The Audi was perfect. I think we added two quarts of oil and the car was never in pit lane longer than it took to put fuel in it. We even had a flat tire, but we were ready for it and we knew exactly what to do. I think there were six cars running from nose to tail for maybe 16 hours. It was just surviving the wet and surviving the night and when the sun came out we really lit up. All we were missing at the end was a tenth of a second, so it was only a hair. I am pleased and so happy for all of the guys who have been busting their butts and happy for Audi to have a car up at the front and also so happy for Johnny and Susan Stevenson as well.”

Davis took the green flag in the No. 57 Stevenson Motorsports from 15th on the GTD grid. Despite a traffic-laden start, the native Georgian quickly moved up the order, making it all the way to fifth before handing the Audi over to Bell.

Flawless stops by the team for the entirety of the race kept the drivers in the pits for no longer than necessary to fuel the sophisticated German machine and allowed all four drivers to not only make up positions on track, but also in the pits.

Bell ran consistently quick in the No. 57, despite deteriorating conditions, ultimately setting the fastest lap for the car with a quick time of 1:47.932-seconds on Lap 81.

As nighttime approached and the rain clouds opened up, the championship-winning team maintained their strategy from the outset, calmly working through their driver rotation and remaining not only on the lead lap but in podium contention for the entirety of the race. 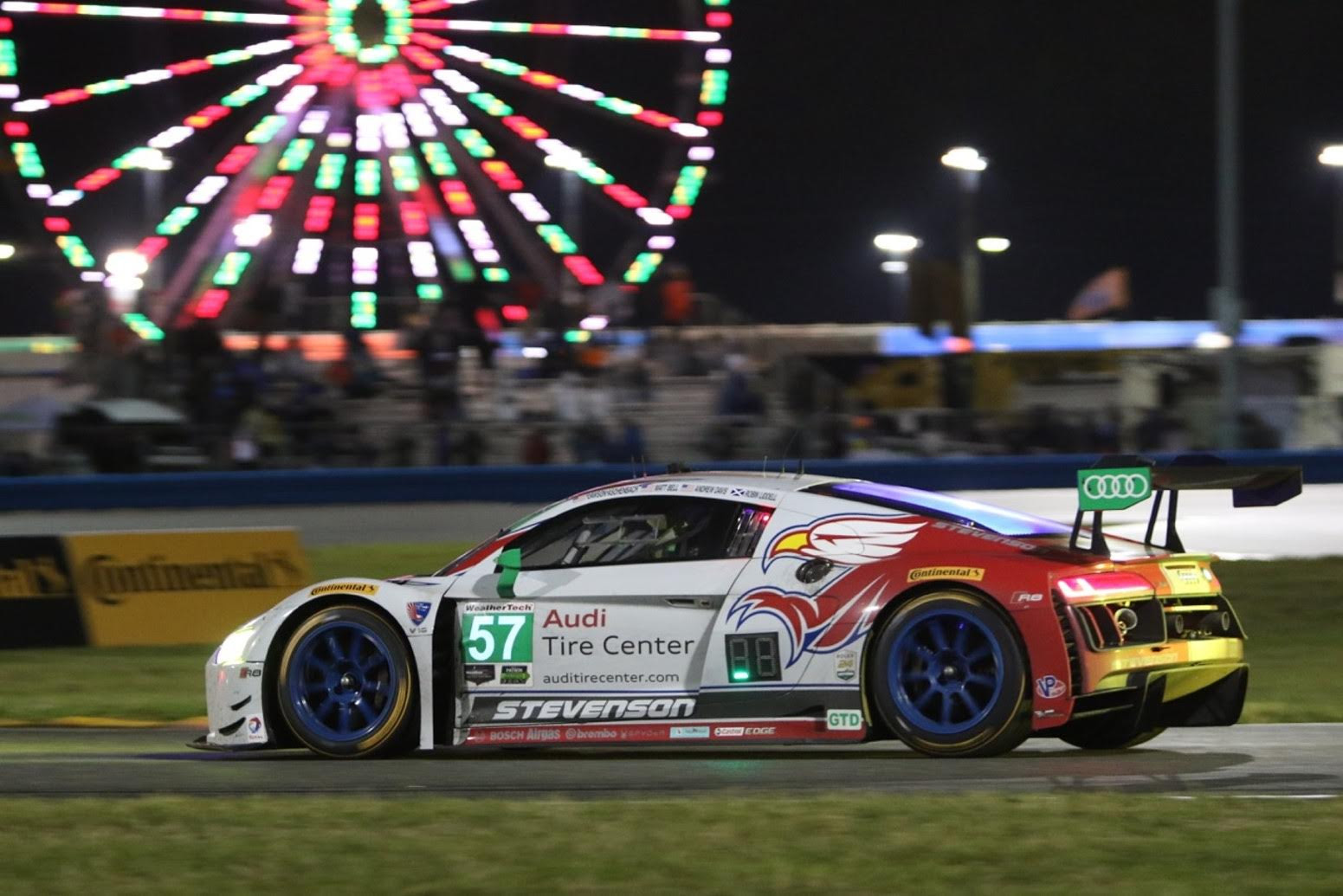 In fact, as the temperatures dropped and the rain continued to fall – essentially turning the 3.56-miles of Daytona International Speedway into a high speed skating rink – all four drivers maintained their cool.
When the No. 57 experienced a flat tire just under the seven hour mark, veteran Liddell returned the ailing machine to the pits for repair without incurring further damage and allowing the team to easily switch the right rear for a fresh Continental Tire.

The remainder of the night proved rather grueling under the bright lights of the World Center of Racing as the relentless rain made traction harder and harder to find. Much of the darkness passed under caution as drivers fought to remain safely on track.

However, excellent strategy calls from the box and levelheaded driving allowed the Stevenson Audi to remain on the same strategy as the leaders for the whole race, with both Bell and Liddell leading the race at different points, and ultimately saw them fighting tooth and nail as the sun shyly rose over the Speedway.

In fact, the final hour of the race proved to be a nail-biter for the entire team as Aschenbach battled to save fuel and make up positions with just an hour remaining to run.

A pinch of luck in a well-timed caution allowed the quick Floridian to let loose without the fear of running out of fuel and he quickly picked off positions, setting lap times faster than two cars ahead. 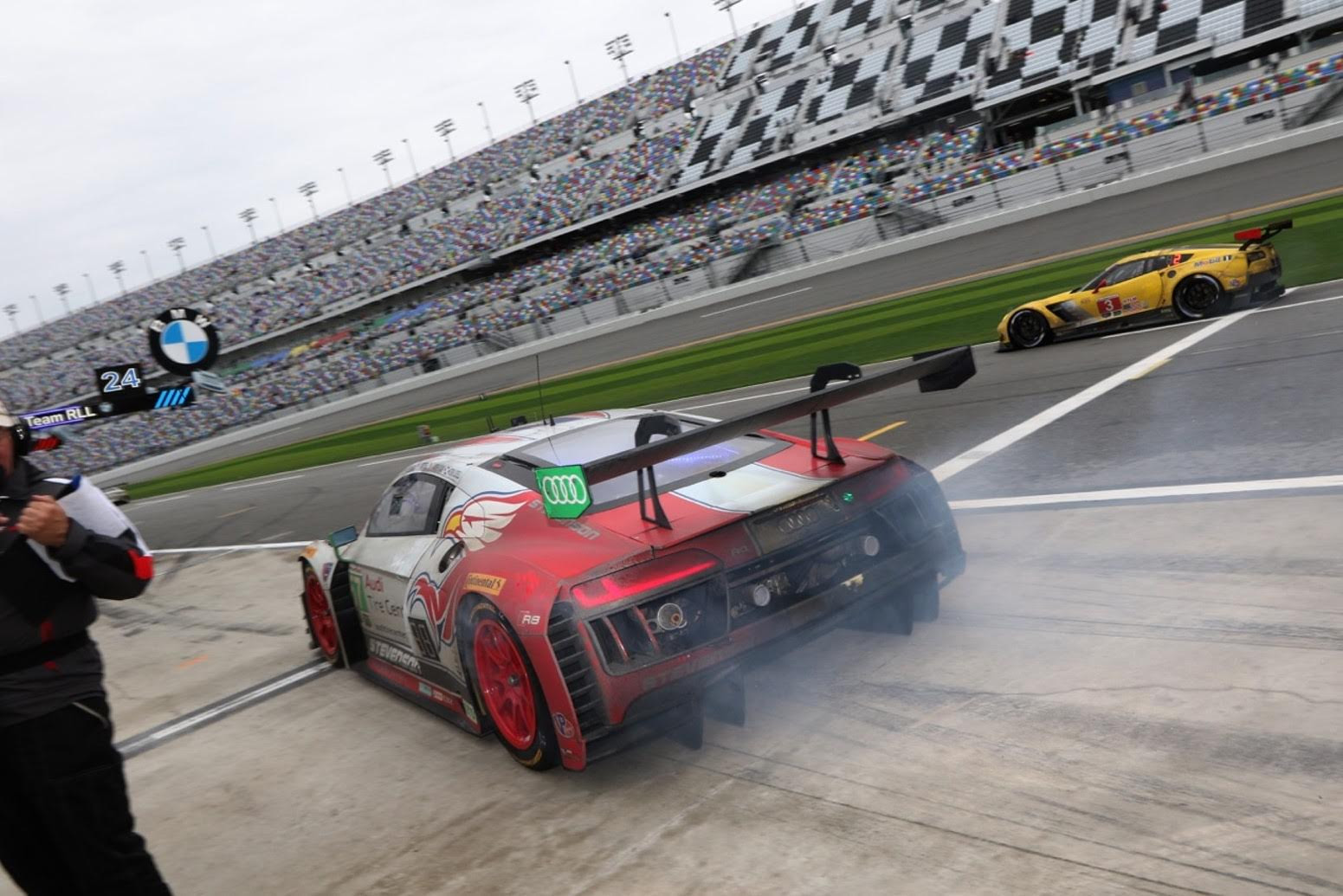 Despite a masterclass in battling traffic while fighting for position, Aschenbach ultimately settled just a step off the podium at the end of the 24-hour event, a mere few tenths of a second behind third place.

The team now looks forward to applying their successful endurance experience in Round 2 of the IMSA WeatherTech SportsCar Championship at the Mobil 1 Twelve Hours of Sebring on March 15-18.

Matt Bell – “This team did just an amazing job this weekend. We had consistency, and we held on to that and I think that the results are evidence of that. We had no extra time in pit lane and we had no real issues. All of the contact that we had was small and we kept it small and we just played the right game. I am so proud of these guys. You just never get these guys down, even with the grueling conditions last night. It has been fun working with Audi on this and this is my second 24 with Audi now so I’m so happy to be here and have this result and am really proud of the whole team.”

Andrew Davis – “I am very proud and grateful for the Stevenson Motorsportscrew and all of the help from Audi. Any time you can finish well in this grueling event here in Daytona, much less in the top five with a P4, it is just a testament to how hard everyone works. We started off the weekend with some adversity and weren’t quite where we wanted to be but when the fight started everyone dug in their heels and just did an amazing job. The guys in the pits truly did an amazing job. The stops were great, driver changes were great. On track and in some of the worst conditions I have ever driven in, we all kept our heads high and stayed mistake-free and just continued to push all the way to the end. I am just really proud to be a member of Stevenson Motorsports right now and really happy to get our season kicked off with a great result here at Daytona.”

Lawson Aschenbach – “Obviously at the end, I was a little bit disappointed not to be on the podium. The guys have been working so hard since the test and I think things changed quite a bit when we got to the race weekend, which historically happens a lot with the grip levels of the track and so forth. I think this was a solid finish to start the season, and we will go into Sebring and see if we can do three positions better. Any time you have not only rain but 39 degree weather it’s very tough to get grip level and tire temperatures. For me, we went out on four sticker rains at one point, and it probably took 20-some laps to get to temperature. It was very frustrating because you were trying to get everything out of the car but realistically you are just hanging on for dear life waiting for the temperatures to come up. It was a tough race but fortunately, we have a team and a group of drivers that are capable of weathering that storm.”

Robin Liddell – “We have been doing this race a long time now, and I am pretty confident saying that this was our best 24-hour effort we’ve had to date. Obviously, we would have liked to be on a podium but with all of the competition and all things considered, we really had a great run. No mechanical problems, no mistakes. The car just didn’t spend any time in the pits other than the fuel and tires. Even when we had the tire failure we didn’t have any damage that needed repairing. Really everything ran flawlessly and the crew were brilliant. Everyone just did their thing and there were no mistakes. It was just a really good execution and I am really happy about that. Of course, we would have loved to win and get a podium, but with the mixed conditions out there it was really tricky and I’m just so pleased with everyone on this team.”