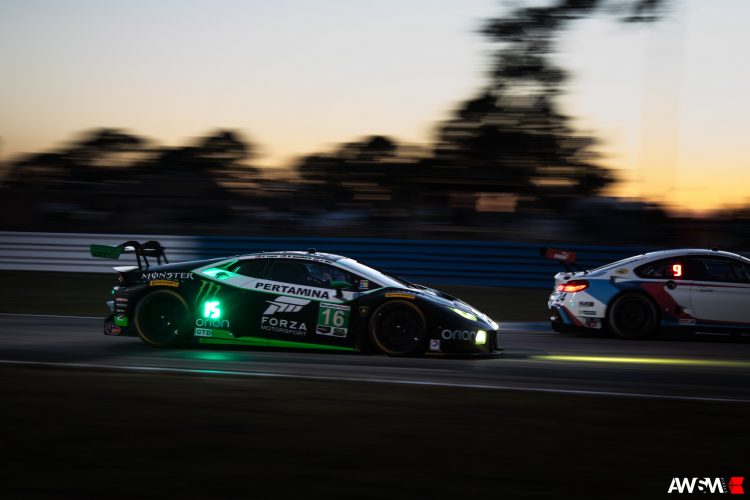 The No. 16 Lamborghini battles for the lead throughout the 12-hour endurance classic but comes up short of the team’s first podium finish 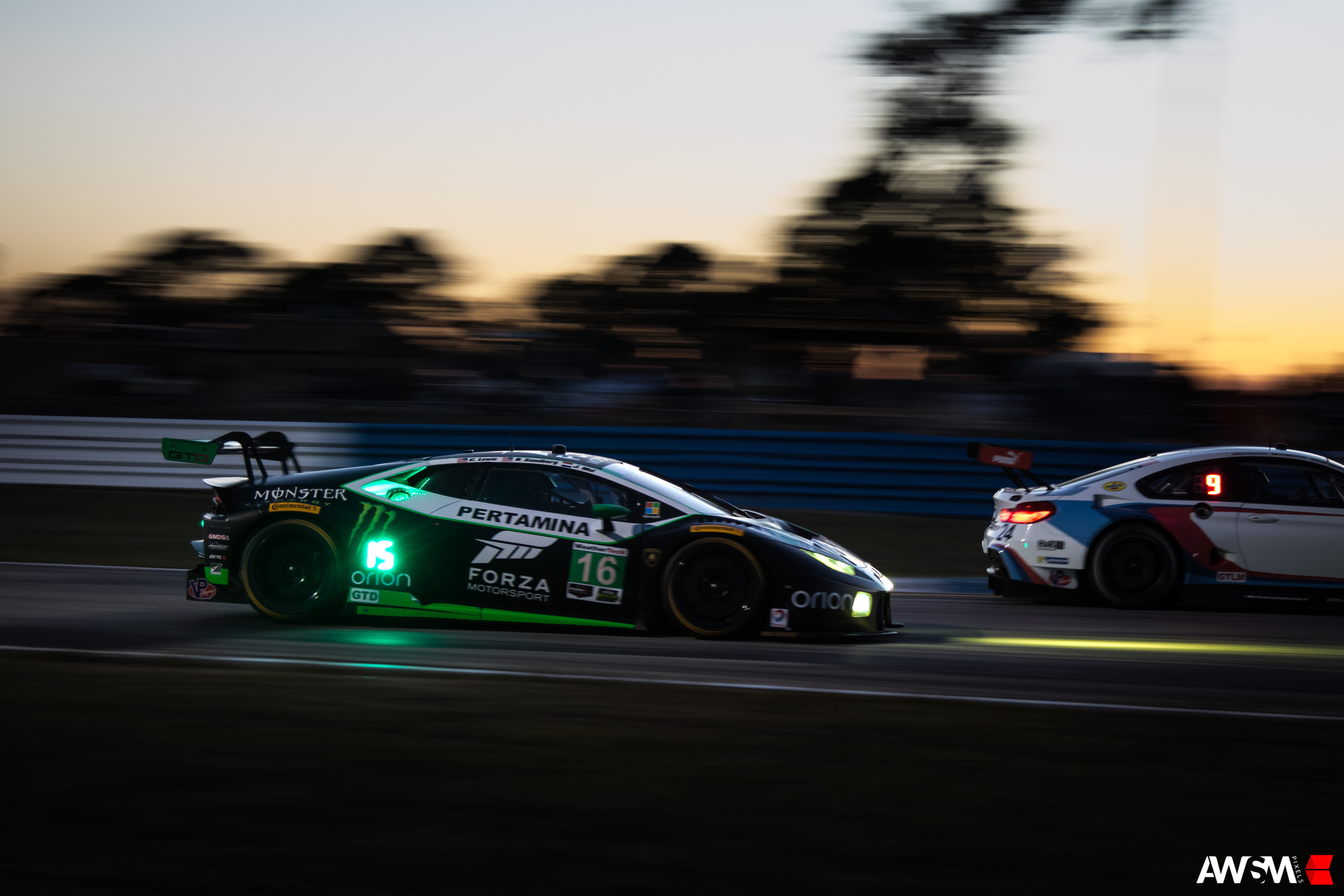 Sebring, Fla. (18 March 2017) – Change Racing came within ounces of a debut IMSA WeatherTech SportsCar podium on Saturday in the Mobil 1 Twelve Hours of Sebring, but the No. 16 XBox Forza / Monster Energy / Orion Lamborghini Huracàn GT3 ran out of fuel agonizingly close to the checkered flag.

Just taking the green flag at Sebring felt like a victory to the Concord, N.C.-based team, as it followed a crash during the first race of the IMSA WeatherTech Championship at Daytona that meant an extraordinary effort from the entire team to build a new Lamborghini Huracàn GT3 mere days before the 12-hour endurance classic.

On a Sebring day-into-night that saw a little bit of everything – including the nighttime launch of a satellite from Cape Canaveral that was visible from the racetrack – drivers Corey Lewis, Jeroen Mul and Brett Sandberg battled with the GT Daytona class leaders throughout the 12-hour event. The team qualified third despite having received a new Lamborghini Huracàn GT3 chassis barely a week earlier. The crew, led by team principal Robby Benton, put in long hours in the shop and at the racetrack to ensure that the drivers had a car that could not only survive but thrive on the bumpy concrete landscape of Sebring International Raceway. 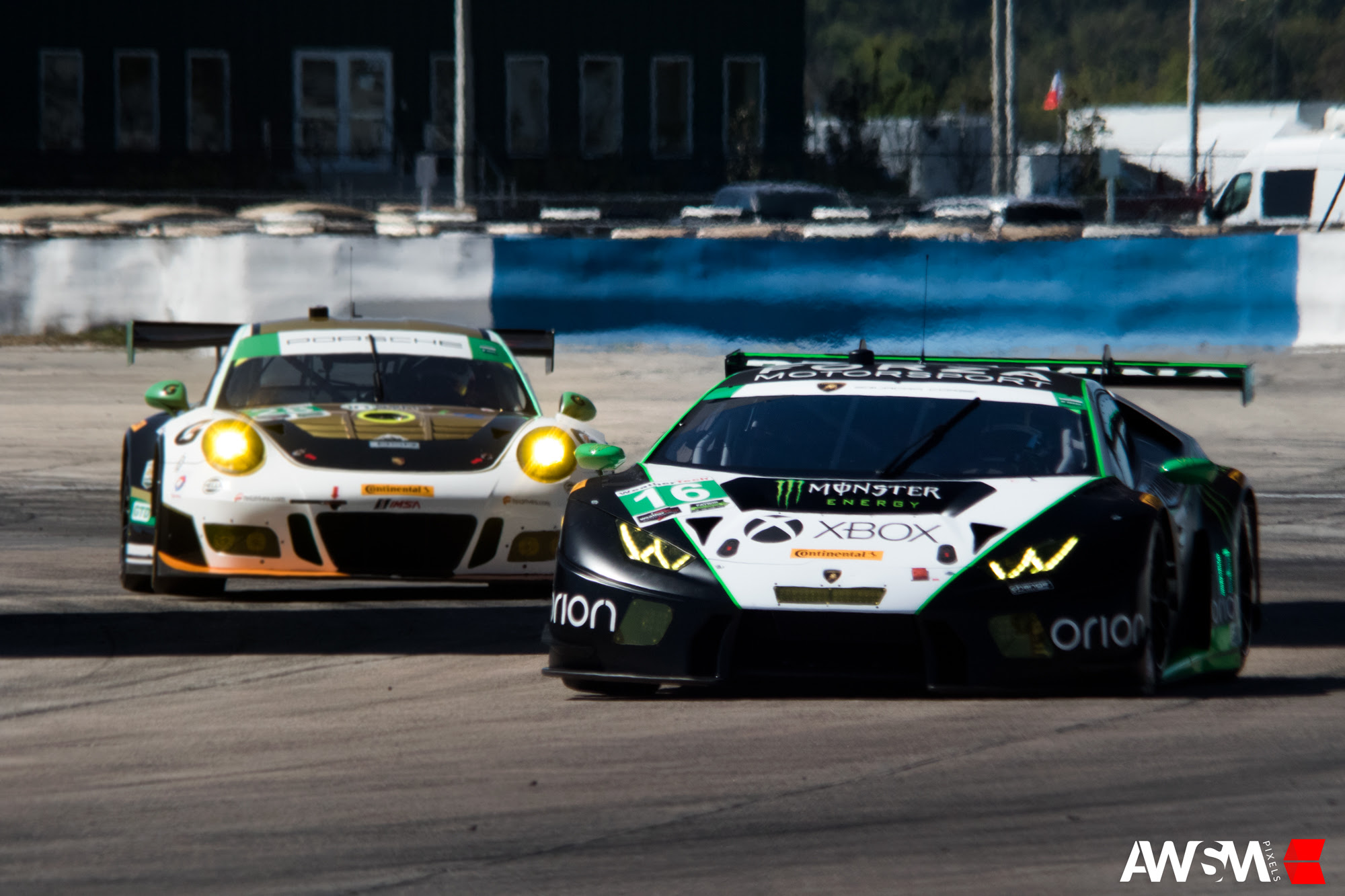 Monster Energy Athlete, Lewis took the green flag and immediately engaged in a spirited battle for the lead with the No. 29 Audi. Settling into an early rhythm, Lewis managed traffic and multiple restarts, all the while keeping his competitor in his sights and setting the team’s quick lap of the race at 2:02.184. Lewis took several hard looks at a pass for the lead but chose to maintain his position rather than pursue a risky maneuver early in the race.

Sandberg took the wheel of the Lamborghini Huracàn GT3 just after the two-hour mark. Sandberg managed traffic well, including the after effects of an overzealous prototype, before handing the wheel off to Mul in 12th position with eight hours remaining. With careful passes, the young Dutchman worked his way up to third position before handing driving duties over to Lewis at the end of an all-green flag stint.

As Lewis settled into his turn, the late afternoon sun and resulting heat began to make their presence known. As Lewis came through Turn-14 with just under five hours to go, a rear tire began to go down, and blew going into 16. With a stellar piece of driving, Lewis was able to get back to the pit box with minimal damage. Mul and Lewis traded double stints as evening came on, with Mul taking the wheel for the final time with 1:24 remaining in the race. Under full course caution with 56 minutes remaining, Benton and the team made the call to pit for fuel late in the yellow flag period, knowing that was their only shot at a podium position. The team stared down the numbers in the closing minutes with Mul running third, only to have the car come to a stop on the back stretch in the final moments of the race.

Losing out on the podium finish was a gut-wrenching experience, but Benton and the drivers take the positives from the weekend, knowing that the breakthrough is just around the corner. 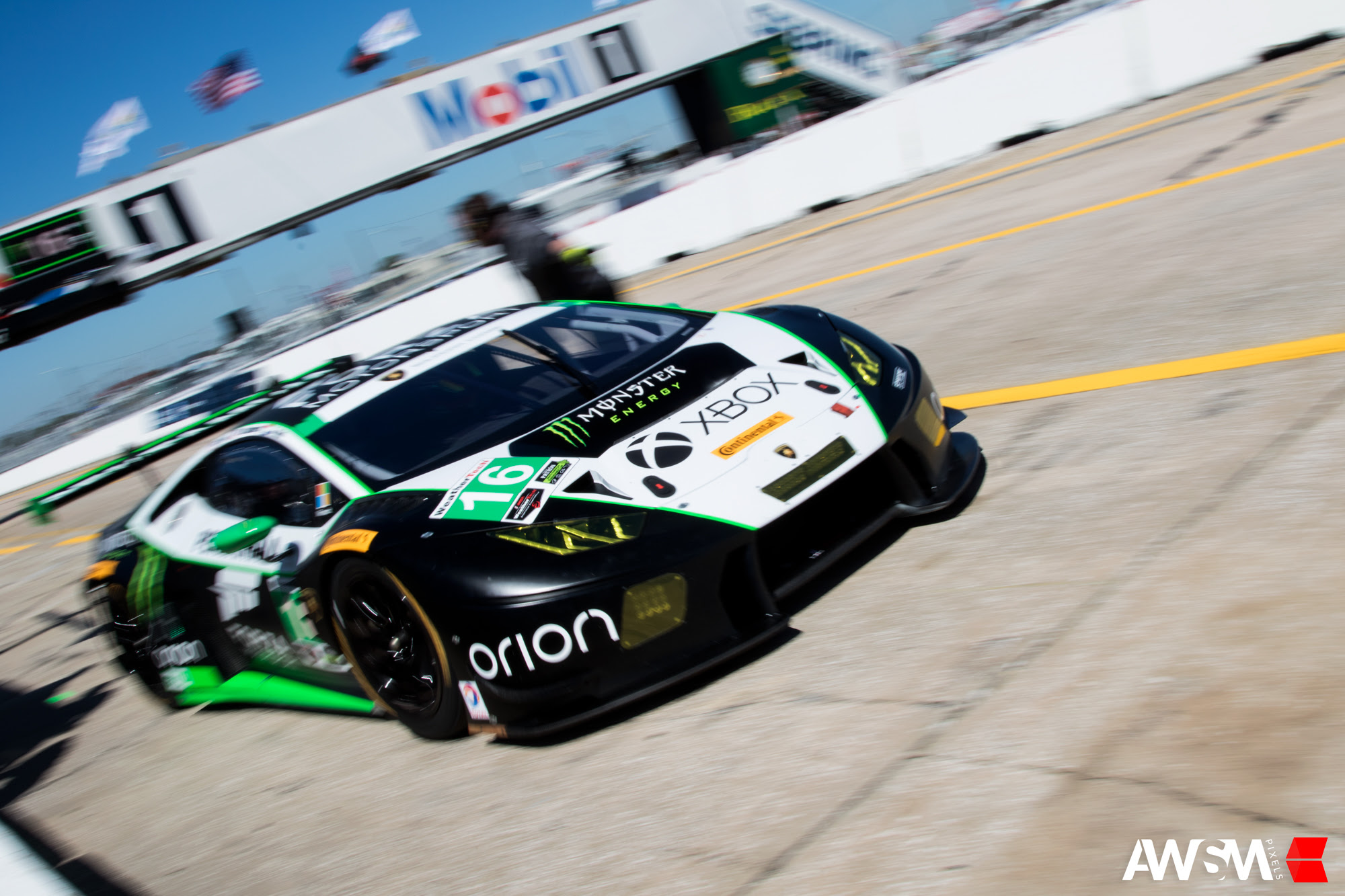 “There were a few times today we could have seen our race completely go away,” said Benton, “but things worked in our favor and we were able to stay in the hunt. We were just a minute and a half short after 12 hours of racing. We knew we were gambling: it was always going to be extremely tight but we honestly thought we had enough to make it to the checkered flag. There’s nothing I would have done differently: if we had been saving fuel, we would have ended up in the same spot so it was a ‘go for broke’ situation. The crew did a great job, the drivers did a phenomenal job – after everything the guys have done to be here, I’m very proud of them. Everyone knew we were here and what we did, and circumstances are the only thing keeping us from standing on our first podium. The guys have proven a lot to themselves and to me; just to be here was phenomenal.”

“We have to look at the weekend as a whole,” said Lewis. “The effort that it took just to get here; the boys at the shop worked so hard. To roll the car off the hauler and instantly have the pace that we needed to be up front and to stay there the whole race is really a testament to this team. One of these days things will go our way; our time is definitely coming. We made a statement this weekend that Change Racing is a top competitor and we’ll be fighting for podiums and wins. I’m very proud of the whole team.”

“We fought so hard,” said Mul. “The car felt great especially as the temperatures came down during the evening. With two hours to go, it looked like a sprint race, because everyone was on each others’ tails. We were close to the front and I knew it would be hard to overtake on track. I knew I had to nurse the car home, but I had to keep up my pace and I couldn’t afford any mistakes. As soon as I saw the fuel consumption light come on I knew we’d be close, and unfortunately we came up just a little short. But the car was epic and the team did an outstanding job preparing the car. We had people here all weekend from Orion, Forza and Microsoft, so I really appreciate their support, as well as my teammates Brett and Corey. We gave it our best and I hope to come back next year and take my revenge.”

“My stint was early but the track conditions were really changing,” said Sandberg. “Working the traffic is difficult but overall, I think we did a good job of managing that. I got pushed off by a prototype on my first lap and I feel that really damaged the tires for me. I did the best I could to bring the car back and not risk more than we had to. The guys did an amazing job so to see all their hard work, and everything we did to get the car here after what happened at Daytona go for naught is extremely frustrating for everyone. I can’t say enough about how hard the guys worked. I think we showed what’s possible for this team and I think the guys will be right there at the next race.”

Next up for the IMSA WeatherTech SportsCar Championship will be the Bubba Burger Sports Car Grand Prix at Long Beach April 7 and 8 on the famed Long Beach, Calif. street circuit.