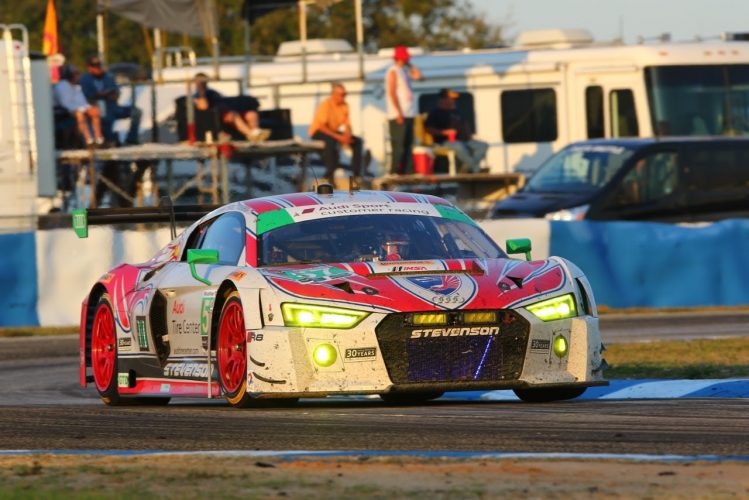 Sebring, Fla. (18 March 2017) – Stevenson Motorsportsfinished seventh in the 65th running of the Mobil 1 Twelve Hours of Sebring thanks to a  relentless team effort that saw forward progress through the field to fight back from two procedural penalties early on.

Full-season drivers Andrew Davis and Lawson Aschenbach teamed up with fellow Stevenson Motorsports driver Matt Bell to bring the No. 57 Audi R8 LMS to the finish of the grueling 12-hour race.

Right out of the gate, Andrew Davis brought the No. 57 StevensonMotorsports Audi R8 LMS to fourth position before turning the car over to Lawson Aschenbach on Lap 26. An hour into the event the first full course yellow saw the Stevenson machine pit for a splash of fuel but a pit lane infraction brought the No. 57 back through the pits with a stop and go penalty after the race returned to green flag conditions.

Unfortunately, new obstacles to victory were still to come. 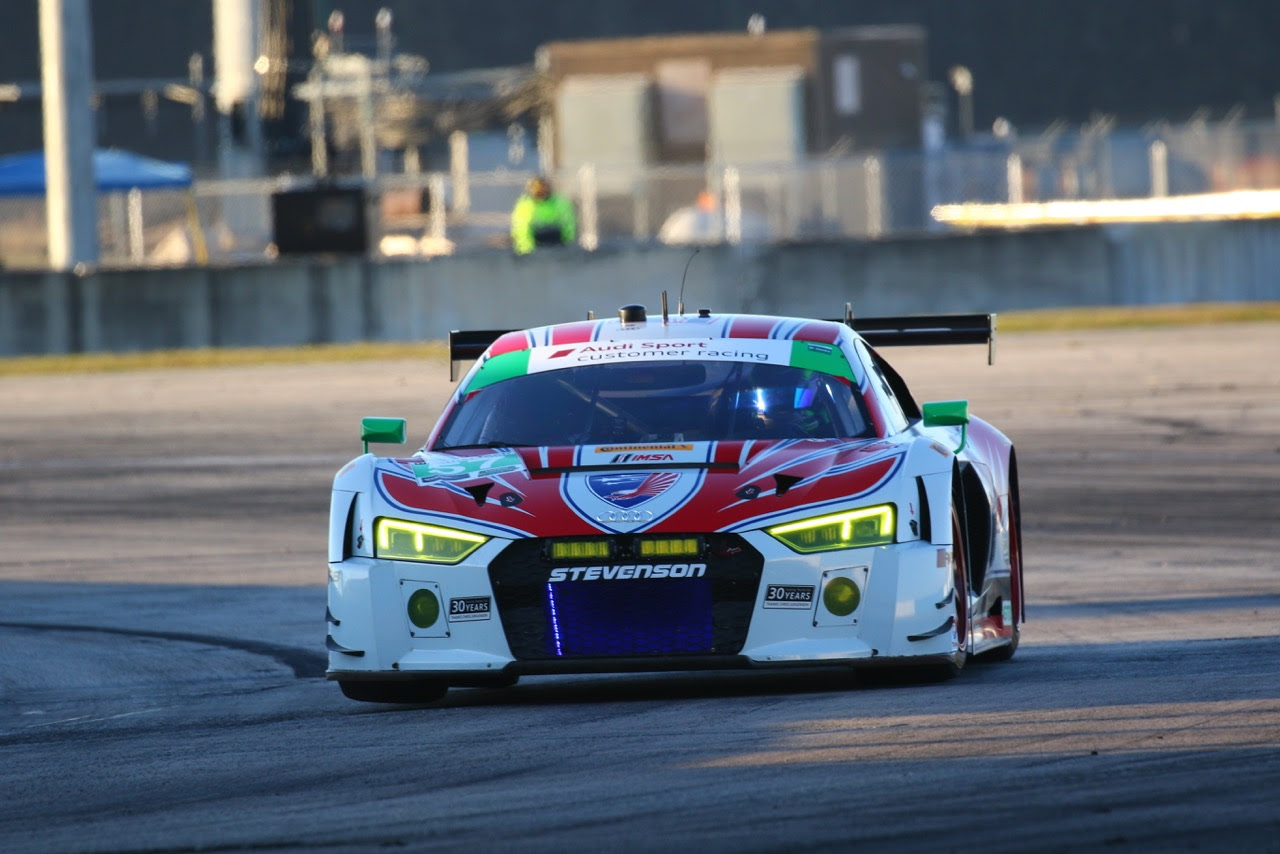 Five hours into the race, a second penalty was handed to the team for an improper pass around the safety car under another full course yellow which dropped the Audi back to 17th position.

A refusal to quit saw Stevenson Motorsports make a comeback surge as Aschenbach converted his long stints and quick times into continued forward progress. After falling nearly three laps down, the Florida resident secured the fourth fastest GTD lap time on Lap 186, and crossed the finish line in seventh position despite being balked by lapped traffic late in the race.

While the  impressive practice and qualifying pace had hopes up for a big Stevenson Motorsports result, the team still closed out the long day of racing with heads held high, proud of the top-10 result which would not have been possible without a full team effort. Stevenson Motorsports looks ahead to the next round of the IMSA WeatherTech SportsCar Championship at Long Beach on April 7-8.

Lawson Aschenbach
“I really have to say it was a valiant effort by the team. To go that many laps down and fight our way back and get on the lead lap and to get back in the top-10 is incredible. All we needed was one more caution to put us right back in the game. I am really proud of everyone for that. We had a feeling the car was going to come alive at night and once it got cool out. It was a great battle in the end with (Andy) Lally and (Tom) Dyer and I am really happy with the result. Thanks to both of my co-drivers and the whole team, it was a valiant effort.”

Andrew Davis
“I’ve never been quite so proud for a seventh-place finish. I am just really happy for the guys. As I always say, we never quit at Stevenson Motorsports. Things looked really dire there in the middle of the race after the penalties. As a driver, you have to keep pushing and I pushed for these guys because they put everything into it. Lawson was running some great laps at the end to put us into position. I am just really proud of the effort all together. It was hard, it was a tough battle and the car was difficult in the heat but then it really came alive in the end. To recover from such a deficit really means a lot. We can still hold our heads high just like we did after Daytona.”

Matt Bell
“That was the most stressful seventh place I have ever been a part of. This team is unbelievable. They went from multiple laps down and acquiring five minutes of penalties where our race is basically five minutes longer than everyone else to finishing on the lead lap. It is just so impressive that we were able to come back from that. The engineers dialed in a pretty perfect car for the night. I am really proud of these guys and I have to thank them for the opportunity. This is a really great group of people and they deserve much more than they got.”