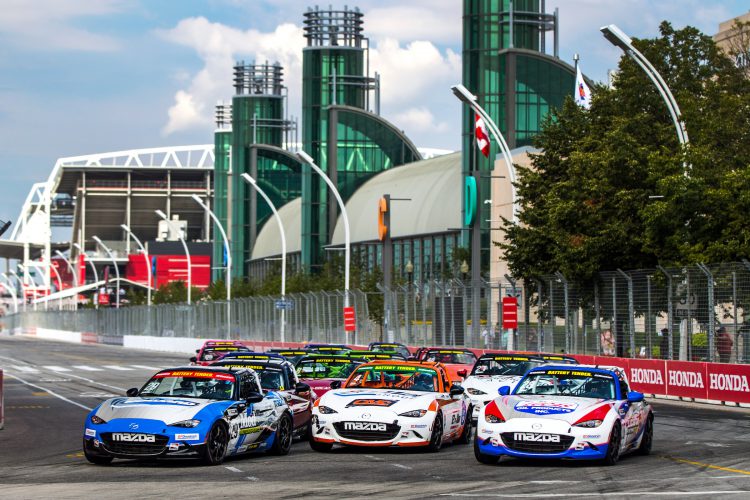 TORONTO, Ont. (16 July 2017) – Patrick Gallagher led Round 8 of the Battery Tender  Global MX-5 Cup presented by BFGoodrich Tires from flag to flag on Sunday. He was chased to the finish line by series rookie Matt Cresci (No. 51 Slipstream Performance/Mazda Road to 24 Scholarship) who finished second, followed by Nathanial Sparks (No. 8 Sick Sideways Racing/Mazda Road to 24 Scholarship).

Gallagher has scored five wins from the first eight races and maintains his lead for the championship and the $200,000 Mazda Road to 24 Scholarship.

“I’ve been to a couple of street circuits before,” Gallagher said. “I think I had a little advantage knowing what to expect from yellows and how the race was going to go. But yesterday, I learned to get to the front, so if the yellow comes out you still get the win. I just tried to stay out front the whole day.”

Gallagher’s early competition was second-place starter Bryan Ortiz, but a mechanical issue for the No. 4 Copeland Motorsports entry dropped him down the order in the second half of the race. Ortiz would eventually finish 11th.

Mazda Road to 24 Shootout Scholarship Winner Cresci (No. 51 Slipstream Performance), was then glued to Gallagher’s bumper, but was unable to find a way to the lead before the finish.  This was Cresci’s best finish of the season and tightened up the battle for the $50,000 Rookie of the Year award.

“We ended up breaking away as two cars,” Gallagher explained. “He kept me honest. He was up on the pedal in the brake zones and a couple times I saw smoke coming off his wheels. I was hoping I could get through this and keep him behind me. I was a little better than him in certain parts of the track and I just tried to make the most of that and hold him off to the finish.”

In his attempt to take the lead from Gallagher, Cresci set the fastest lap of the race on the final lap, a 1:24.709-seconds lap of the bumpy street circuit.

“I had a lot of understeer in qualifying on scuffed tires, so we went back to stickers and raised the rear a turn to see if it would work and it was on rails,” Cresci said. “I had nothing on the straightaway for Patrick (Gallagher), so we’ve got some more work to do to figure out how we can improve there. Regardless, that was probably one of the most fun and intense races I’ve ever had. You can probably see it on my face! It was an awesome race and I look forward to more running at the front!”

Starting fifth, Sparks (No. 8 Sick Sideways Racing) found himself in an intense battle for the final podium spot with a pack of five Global MX-5 Cup cars. At the front of the pack was Luke Oxner (No. 77 White Racing) and in the final laps of the race, Sparks was trying everything he could to get around him. His persistence paid off and he crossed the finish line in third.

“I was pushing like crazy,” Sparks said. “At a street circuit like this, you’ve got to push, push, push and hope you don’t make a mistake. Passing is extremely difficult and the track surface changes through the passing zones.  It’s another variable you have to take into consideration when passing. I fell back and worked my way back up. I got a few nicks and dings in my car, but I’m excited to finish the weekend getting a podium for my team Sick Sideways and my car is in good shape.”

Max Faulkner (No. 82 McCumbee McAleer Racing) and Oxner were also in the hunt for the final podium spot throughout the second half of the race and eventually finished fourth and fifth, respectively. Tom Martin III (No. 21 Winding Road Team TFB) had another strong race on the 1.786-mile, 11-turn temporary street circuit, finishing sixth for the second day in-a-row.

Just behind him in seventh was Nick Evancich (No. 41 Sick Sideways Racing) who took home the Battery Tender Hard Charger Award for picking up eight positions during the race.

“I just tried to weather the storm because it can be mayhem at the start, especially with the walls right there,” said  Evancich. “Then I was able to team up with Zach Lee, my Sick Sidways teammate and we were able to work together and pick off a lot of spots. It feels good for me to get this result for the guys on the team and to pay back their effort with this award!”

Yesterday’s race winner, Robert Stout (No. 28 McCumbee McAleer Racing) was involved in an incident at the start and made a trip to pit lane for repairs, only to be hit with a drive-through penalty for violating the pit lane speed limit. He finished 12th.

The next round of the Battery Tender Global MX-5 Cup presented by BFGoodrich Tires will take place at Watkins Glen International, in upstate New York, Sept. 1 – 3.