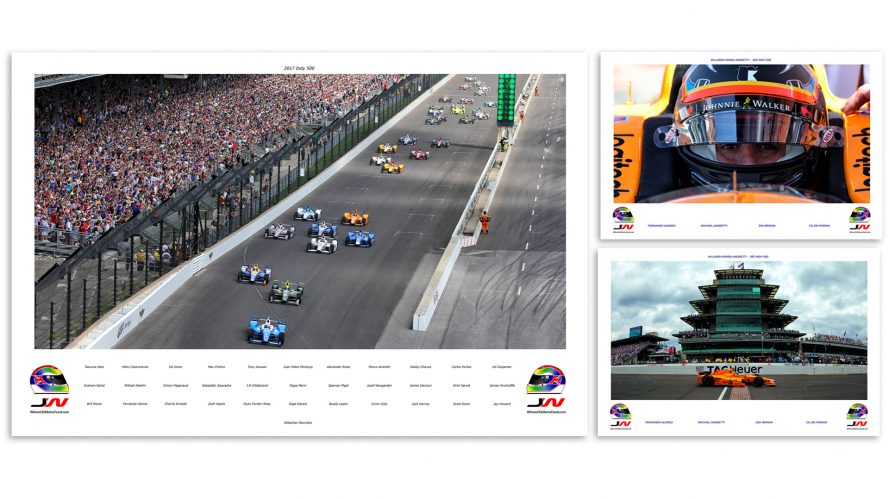 Sonoma, Calif. (12 September 2017) As the Verizon IndyCar Series prepares to crown a champion this weekend at Sonoma Raceway, the assembled drivers will have one extra item on their to do list—help a friend.

Continuing an effort that was initiated ahead of the 2016 finale that featured an image of the start of the Watkins Glen IndyCar race, the Wilson Children’s Fund (http://wilsonchildrensfund.com/) will once again be offering a custom run of items to generate funding for the children of late IndyCar driver Justin Wilson.

The 2016 auction raised over $11,000 that went directly to the daughters of the late IndyCar star, who was killed in a crash at Pocono Raceway in August, 2015.

Organized by leading motorsports journalist Marshall Pruett, the 2017 initiative will feature 12 prints of the dramatic start image of the 2017 Indianapolis 500. Thanks to the work of the Sonoma Raceway communications staff,  as well as support from McLaren’s Zak Brown, the prints will be signed by all 33 drivers in the field.

Fabled motorsports artist Andy Blackmore has donated his design efforts for the print, and Paul Zimmerman of The Motorsports Collector will once again host the silent auction at http://motorsportcollector.com/.

Additionally, a follow up offering will be provided as Fernando Alonso, Michael Andretti, Gil de Ferran, and Zak Brown will sign a limited run of two different prints that commemorate the Spaniard’s thrilling run in his Indy 500 debut that will be made available via an auction in December.