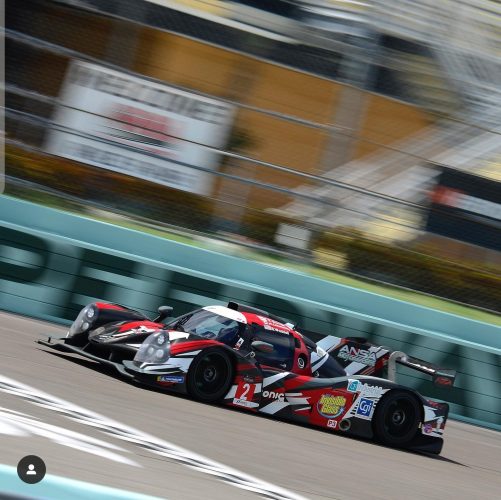 I was invited by ANSA Motorsports to run the FARA 3-hour event in Homestead Miami and found out that I would be sharing the car with my teammate, Tim George.  I raced for ANSA in the IMSA Prototype Challenge event at Mid-Ohio and I was super happy that they asked me back to run for them again.

Preparing for this weekend was different than an IMSA Prototype Challenge event. There was less pressure so I was able to relax and focus on my driving while taking the race seriously.

Thanks to ANSA, this was a great development weekend, allowing me to really focus on the things that tend to limit me during an IMSA weekend.

Overall the weekend was amazing. On Saturday, the first session of the day was qualifying and I put the car third on the grid. My teammate Tim George drove in the first sprint race of the weekend but it did not go his way, resulting in him finishing 18th.

This meant we would start 18th for the second sprint race. Since it was an hour long, I started the race and Tim finished. I was very pleased with my pace, moving all the way up from 18th to lead the race. We were unlucky when there was a yellow flag and Tim had to make a pit stop, but he was able to hold on and finish 3rd in class for our first podium of the weekend in the Invisible Glass Prototype.

On Sunday we had a three hour endurance race, and that was the one that really counted. Our strategy was based on us starting in third place so I would start the race, Tim would drive the second stint, and then I would finish. My first stint was great – I took a 20 second lead and set the fastest lap of the weekend.

During the second stint Tim kept the momentum and stayed in the top three. When I got back in the car I was in second and closely chasing the leader. But we got unlucky with the yellow flag once again! Unfortunately, even though we’d been so quick, the timing of the flag meant that the leader was able to make a free pit stop which put them an entire lap ahead.  It was disappointing because we had the pace to win, but that’s how racing goes sometimes.

Ultimately, the weekend was a blast and I can’t thank Invisible Glass and ANSA Motorsports enough for having me.  Although we didn’t get the win, I’m very pleased with my driving. I got to set the fastest lap of the weekend and that felt really awesome, and my co-driver kept improving the entire event so we were all really pumped after the weekend.

It was a very positive experience and the weekend has given me a huge confidence boost that will benefit me as I prepare for the next time out in the Invisible Glass Prototype back in IMSA Prototype Challenge competition at Canadian Tire Motorsports Park in July!