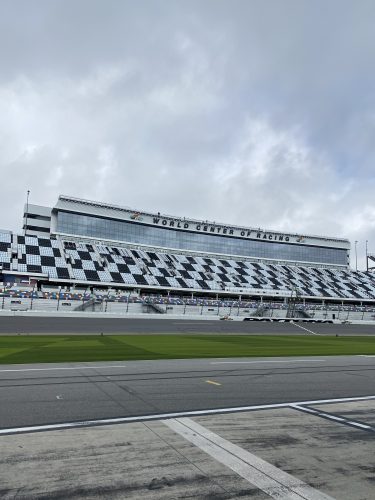 The IMSA WeatherTech SportsCar Championship kicks off the season each year with the Roar Before the 24 at Daytona International Speedway. The 2020 edition was my first experience at the event, not only working but ever.

Daytona is a landmark in the racing industry and the venue comes to mind when thinking of iconic motorsports locations. My first visit to the track was in 2009 at the age of 12 years old – too young of an age to really appreciate the history that was made around me.

The weekend kicked off at full speed with media day on Thursday. 39 WeatherTech entries for the 2020 Rolex 24 at Daytona brings over 150 drivers from around the world to the marquee event. Every single one of those drivers is sent through a rodeo of interviews, photographs and more to prep for the race and the entirety of the 2020 season. Media day immediately awakens one mentally and physically from the off-season break.

Not only is the Roar a weekend of testing for the IMSA WeatherTech SportsCar Championship but it also hosts the opening round for the IMSA Prototype Challenge (IPC) with a three-hour race around the 3.56-mile road course. JR III Racing joined Sunday Group Management’s roster of clients for the 2020 season and are competing in the IPC for the very first time. Appointed as the point for JR III Racing, I am tasked with handling all its PR needs in all aspects, from on-site social media to press release writing and beyond.

Meeting a new array of crew and drivers can be a challenge having to remember several new names while also learning the personalities that make up a team. Joining the dynamic of JR III Racing was seamless. Team owner, Billy Glavin, created an inviting environment with crew who were helpful and kind moments after just meeting me. JR III Racing drivers, Greg and Eric Palmer were experiencing the Roar Before the 24 for the first time as well, so we all took in the sights and sounds together.

Also on-track during the Roar weekend was another new addition to Sunday Group’s roster of clients this year. Taylor Hagler is an up-and-coming racer in the No. 77 L.A. Honda World entry competing in the IMSA Michelin Pilot Challenge. Hagler too was new to Daytona International Speedway. Working with Hagler included learning the ins and outs of her time on track but also getting to know her as a person in order to help boost her profile to the media. Working with someone who is my own age and has a similar personality does not carry the nerves that usually come with getting to know someone new, but it was like catching up with an old friend.

Managing a jam-packed schedule can be tiring but it also presents the opportunity to use all that I have learned from my time with Sunday Group while settling into my new role as well. While it is just the first event on the schedule, the Roar was an exceptional experience to get back into the groove of race season. Sunshine and 80 degrees aren’t a bad way to spend a day at a racetrack either, but I truly believe any day at a racetrack is a good day. The Roar was no different. I am excited to see how the iconic Rolex 24 Hours at Daytona changes the environment of the track and how it builds on the foundation set in place by the opening weekend.

As the racing season gets going, I am looking forward to experiencing my first full season in my role as Digital Content Curator and expanding my skill set in the public relations industry. The next stop: the Rolex 24 at Daytona.