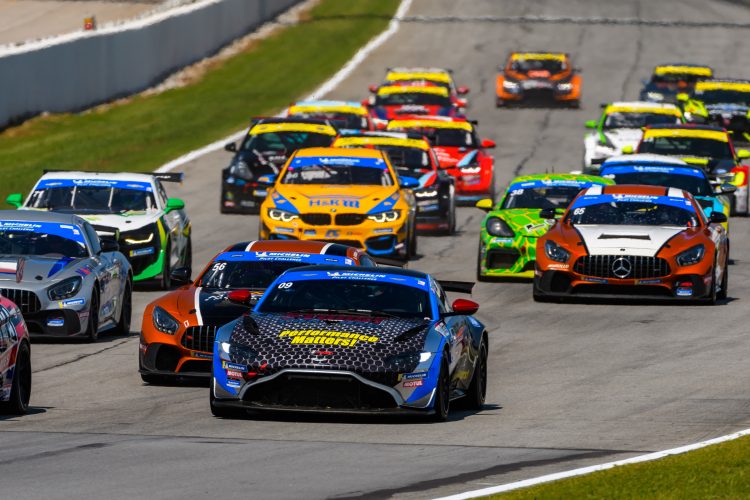 BRASELTON, Ga. (16 October 2020) – It was a hard fought but, in the end, disjointed race for the Stoner Car Care Racing fielded by Automatic Racing team in Friday’s Fox Factory 120 at Michelin Raceway Road Atlanta. Trying to maintain pace through numerous caution periods with its two Aston Martins, the team battled to the end to see both cars through to the checkered flag in Round 7 of the 2020 Michelin Pilot Challenge.

Through two practices and qualifying on Thursday, the team worked hard to make setup changes to regain pace after IMSA reduced horsepower for all the Aston Martin Vantage GT4s in the field. Rob Ecklin Jr. and Ramin Abdolvahabi put the No. 09 Stoner Car Care Aston Martin in 16th position on the starting grid, with Gary Ferrera and Kris Wilson starting the No. 99 Invisible Glass Aston Martin from 20th.

Ecklin and Ferrera took the green flag for Friday’s race start and each took advantage at the green flag to move up a position on the opening lap. 15 minutes into the race, the first of four caution flags flew with Ecklin up to 13th position and Ferrera in 18th. After a lengthy repair to the tire barrier, the field returned to green. With several cars ahead deciding to exchange paint on the restart, Ecklin wisely chose the cautious route with 85 minutes left in the race and fell back to 15th as Ferrera moved up to 17th. 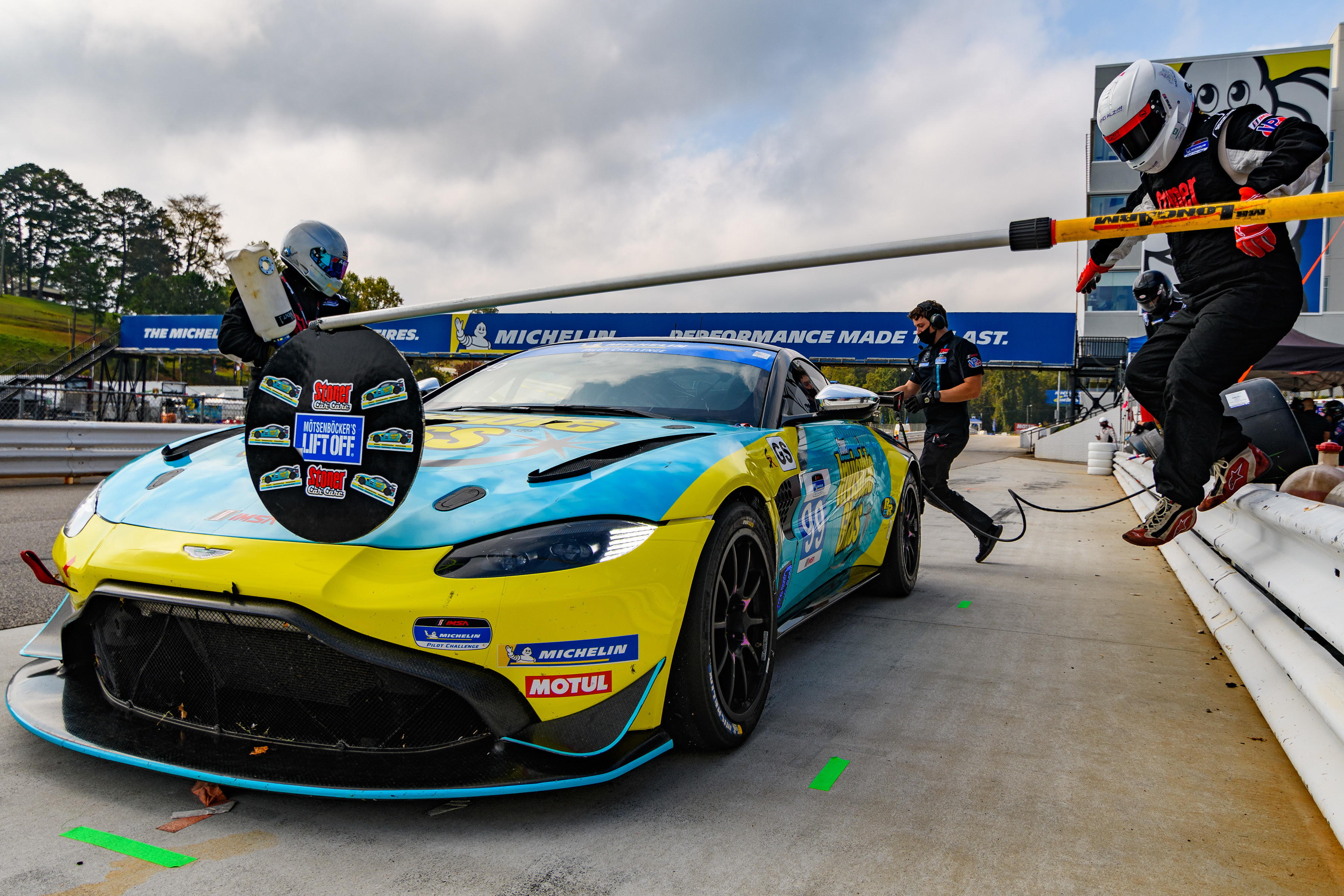 The field remained under green for only a few minutes before a car stopped on course. With both Ecklin and Ferrera having cleared the required IMSA drive time, the Stoner Car Care team chose to bring both in for tires, fuel and driver changes, as Abdolvahabi climbed behind the wheel of the No. 09 Aston Martin and Wilson into the No. 99 machine.

“One positive is that I wouldn’t change anything on the car’s setup,” said Ecklin. “I had a decent start but there was a lot of traffic. Big thanks to Kris (Wilson) on the radio, who saved me from the Aston sitting under the bridge in the first big incident, he was right in my line. The car handled well, though, considering how down on power it was. I had some really good shots out of Turn 7 and I’d set up the draft, but by the time I got into the braking zone, they were gone – and that’s a power issue.”

“We really wanted a top 10, but we were able to make it to 11th and that’s a positive,” said Ferrera. “But at the same time, the car just really did feel under power on the straights and other cars could easily take us. It was handling well, so I could hold my own through the early turns but by Turn 7, if someone was right there, they could get me on the straight with no problem. The handling was great, we just need to figure out why we’re down on power.”

The green flew for another restart at the 1:09 mark, with Wilson in 18th and Abdolvahabi right behind. With a pair of unfortunate pit lane penalties which initially put Abdolvahabi a lap down. Once into his rhythm, he ran in 20th position, determined to get the lap back with just under an hour remaining.

Meanwhile, Wilson settled into 15th place, putting down lap times similar to the leaders’ and looking to make up ground. When a full course yellow came out for a car off in Turn 1, Wilson had moved up to P11, with Abdolvahabi in 19th. With yet another caution with 22 minutes remaining, the final green flag flew with just over six minutes left in the race, Wilson up to 12th and Abdolvahabi 17th.

“We were really happy with the balance of the car, we really stuck that,” said Wilson. “However, it’s tough to race the car with adjustments that don’t allow us to make any passes no matter how good the car is handling. But the Stoner Car Care team did a great job today, and we had a great strategy, had we had the power to execute it.”

“I was on the rev limiter coming into pit lane, so we’ll have to look at what happened there,” said Abdolvahabi of the pit lane speed infraction. “But starting the stint with penalties, that automatically puts you down a lap. And the power was gone today, especially in third and fourth gear. It was a tough race, but given all the incidents, it could have been worse.”

“It’s to be expected here a little bit, the kind of incidents we saw today,” said Automatic Racing’s David Russell. “The Invisible Glass car had quite a good run but unfortunately it just wasn’t meant to be. We are happy with where we are with car, handling-wise, it just didn’t quite have the legs to be able to execute any passes. We just kind of faded – we struggled with the same car that started on the pole here last year and I think that says a lot.”

Fans can catch a rebroadcast of the Fox Factory 120 on NBCSN Wednesday, October 28 at 3:00 p.m. Eastern. Next up for the Michelin Pilot Challenge is the season’s penultimate event, the Hyundai Monterey Sports Car Championship October 30 to November 1 at WeatherTech Raceway Laguna Seca. 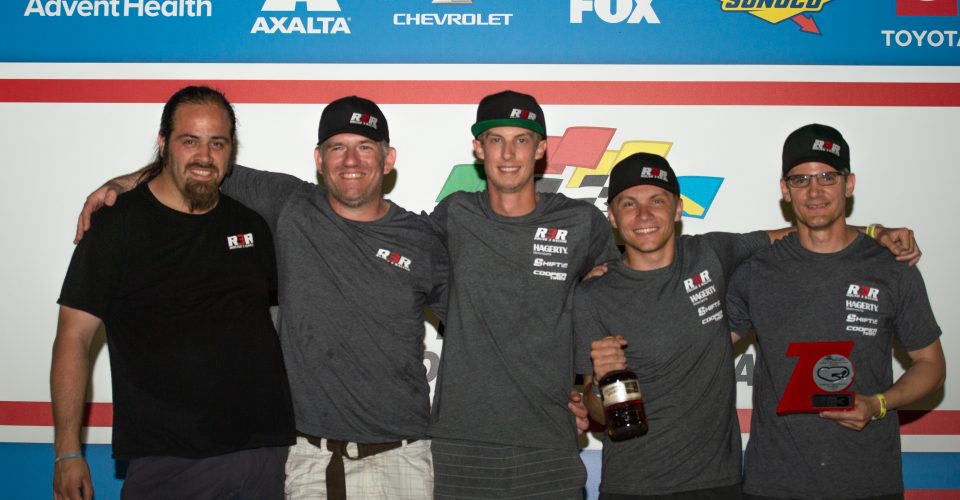