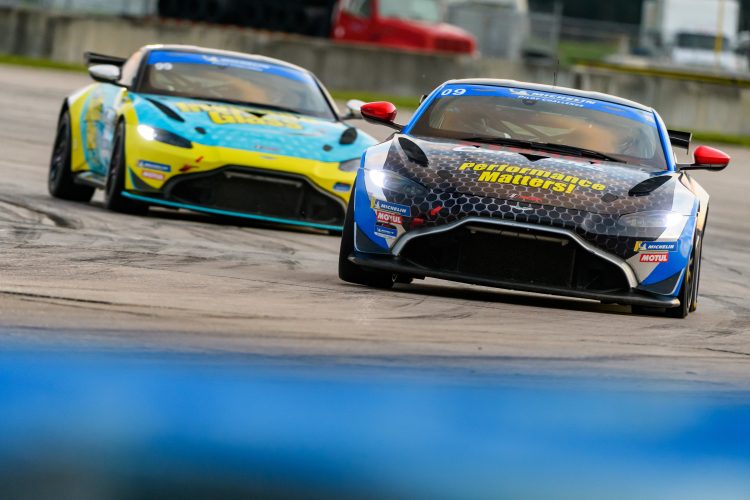 SEBRING, Fla. (13 November 2020) – The Stoner Car Care Racing fielded by Automatic Racing team had hoped to finish the season on a high note in the last of three home races for the Orlando-based team this year, as the IMSA Michelin Pilot Challenge took the checkered flag Friday in the Alan Jay Automotive Network 120 at Sebring International Raceway.

Unfortunately, issues for both Aston Martin Vantage GT4s in the first pit stop sequence dashed those hopes, despite valiant efforts by Rob Ecklin Jr. and Ramin Abdolvahabi in the No. 09 Stoner Car Care Aston Martin, and Gary Ferrera and Kris Wilson in the No. 99 Invisible Glass Aston Martin. The No. 09 Aston Martin came home in 18th while the No. 99 finished 20th.

The race weekend, part of the IMSA WeatherTech SportsCar Championship’s Mobil 1 Twelve Hours of Sebring, began under the threat of Hurricane Eta, whose path held prospects of rain which affected the mid-Florida area. But the expected rain never materialized, leaving Thursday’s practice and qualifying sessions in warm and dry conditions. Abdolvahabi and Ferrera qualified the cars together on Row Nine of the starting grid. 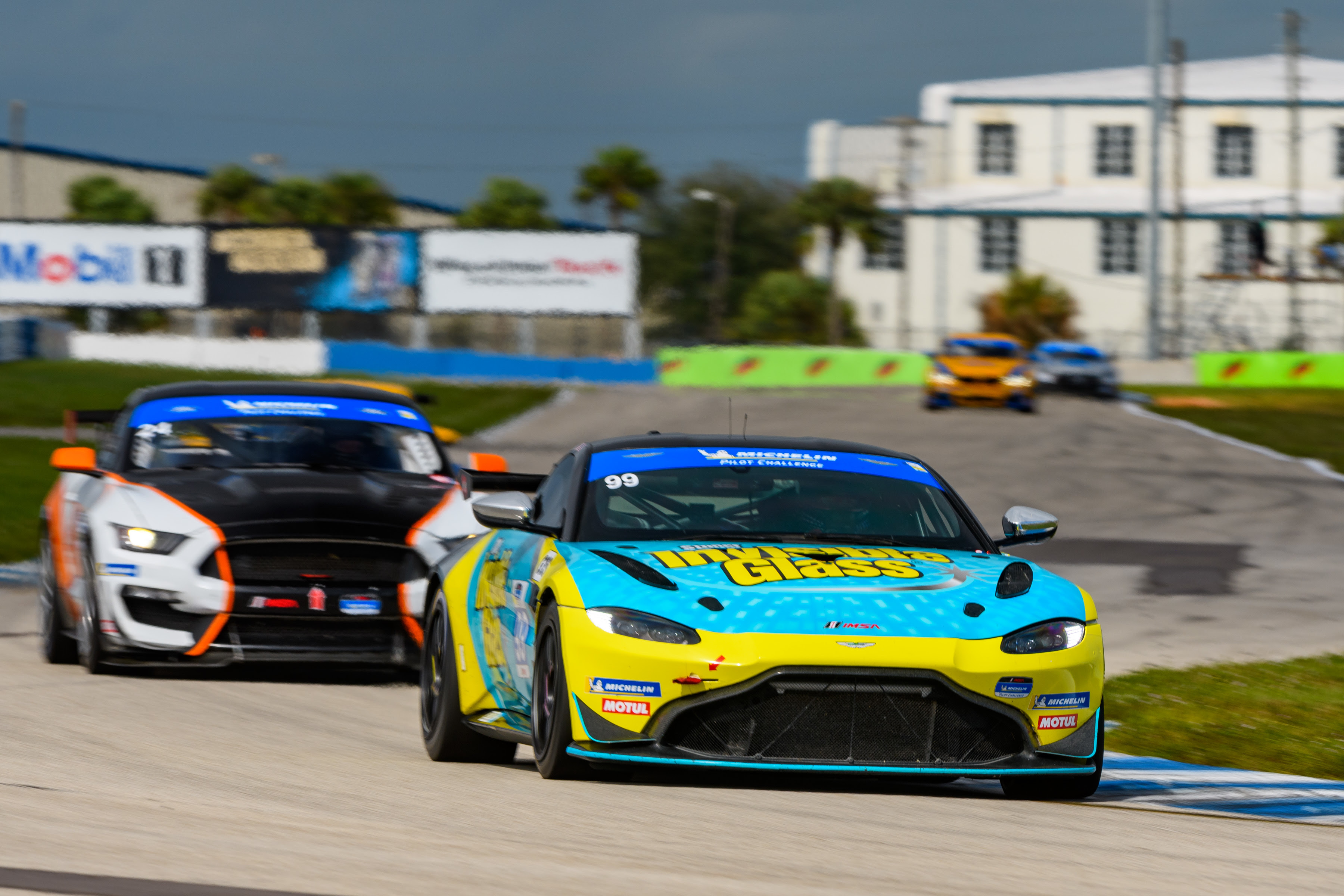 The cars remained nose-to-tail for much of the early going, with Ferrera glued to the rear wing of Abdolvahabi. The pair were able to move up to P6 and P7 when a full course caution froze the field as several cars took to pit lane. Abdolvahabi and Ferrera came in for their own stops and driver changes late in the 15-minute caution period as Ecklin and Wilson each took the wheel with 1:18 remaining in the race.

Unfortunately, issues befell both cars during the pit stop sequence. The No. 09 garnered a drive-through penalty for a pit speed violation while the air jack fitting broke on the No. 99, necessitating manual jacking up of the car, and a return to pit lane to adjust the left front. When the dust settled, Ecklin and the No. 09 Aston Martin lay in 21st position, with Wilson and the No. 99 in 22nd.

Both cars laid down competitive times through the remainder of the race, with Wilson pacing quicker laps than the leader as he tried to get back on the lead lap. In the end, both drivers did their best but were not able to dramatically improve their positions as the season drew to a close.

“We made some changes that made the car better, but the platform is still not synced up,” said Abdolvahabi. “But we kept the car on the track and squeezed as much as we could out of it. The guys did a great job in pit lane, they were on it. I messed up which got us the drive through, that one is on me. We’ll take what we’ve learned this year and apply it to 2021. We just need some good luck!” 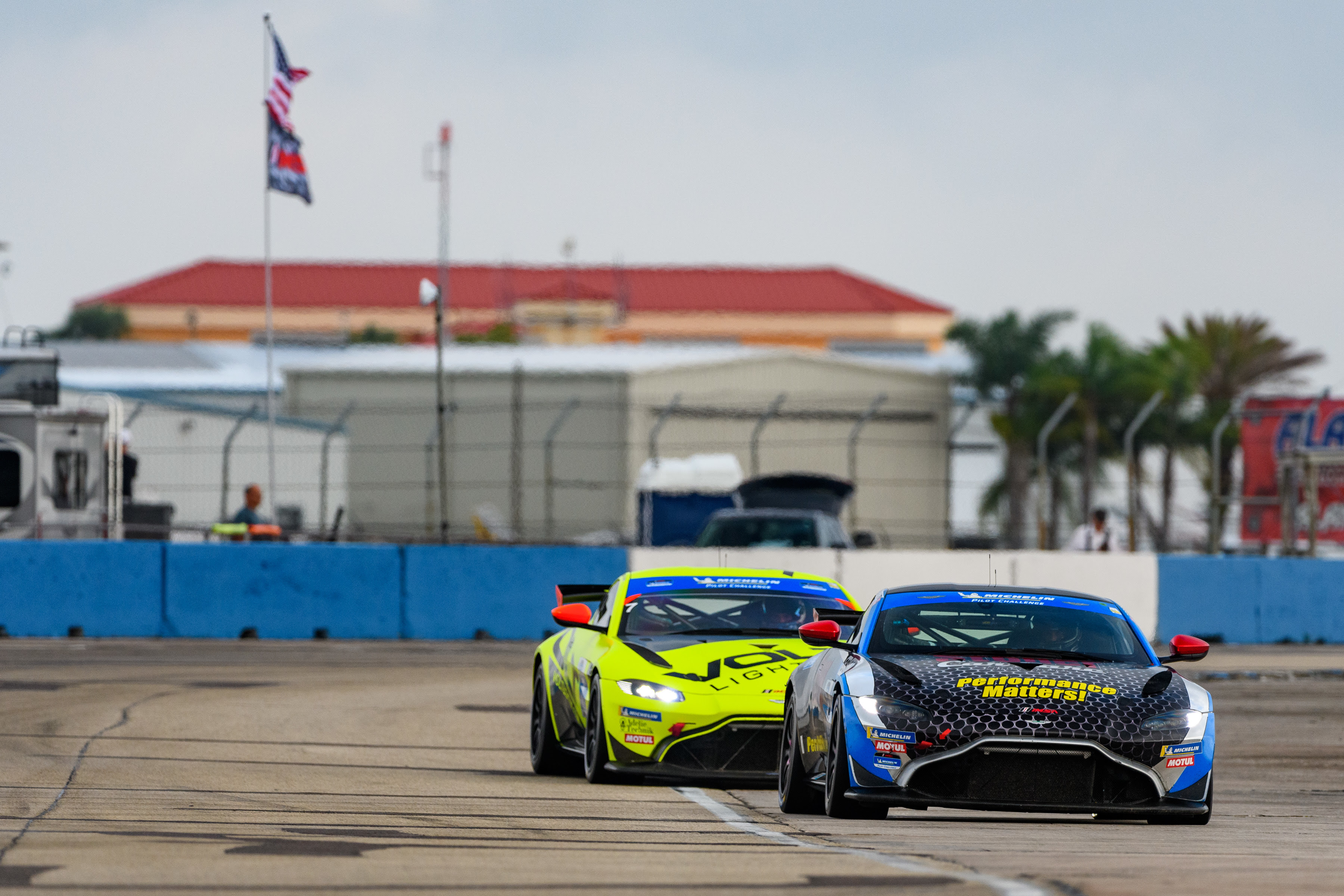 “I just kept completely focused on the road ahead through my stint, working on lap times, and it was a good, clean run,” said Ferrera. “We had good track position and a great strategy, but we had the air jack problem and that put us down in the field. Kris drove his heart out and put down some amazing times, comma so we did everything we could. The team did a great job, we just had some bad luck. But my favorite part is the teamwork, so I enjoyed getting behind Ramin and trying to do the best lap times we could.”

“Ramin did a nice job qualifying and he and Gary had a nice, clean stint,” said Ecklin. “I was excited to get in the car and continue that. The car has gotten better, but the lap times still aren’t there and I’m not quite sure why. We need to work on that. The penalty hurt us some, but not that much in the end. It was a good race despite that, with only one caution and some good wheel to wheel racing. It’s been a topsy turvy year, on track and off, but I’m happy to have been able to race and hope next year is a more predictable season.”

“Gary and Ramin did an awesome job, running consistent times and staying right there in the game,”” said Wilson. “ It was a good call to come in right at the end of the drive time, until the air jack hose fitting broke.  Stuff breaks, but it put us a lap down. We put in some good laps on new tires after that, but we were so far back we couldn’t make it up. It’s a shame, the team did a good job to keep us out there.”

“It definitely wasn’t the way we wanted to end the season,” said team manager David Russell. “We certainly had more to show. We have a short turnaround before the 2021 season starts so with two cars in good shape leaving here, we can work to make them better for Daytona.”