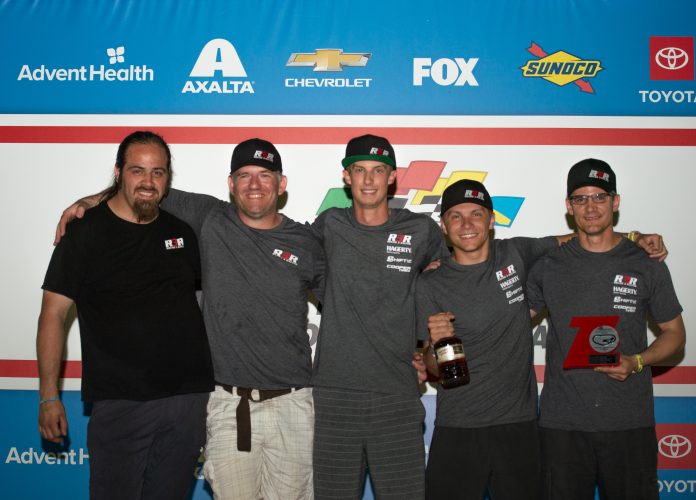 Daytona Beach, Fla. (6 June 2021) – Continuing a three-race podium streak, Round 3 Racing (R3R) claimed the top step with a World Racing League (WRL) win in the GP3 class at Daytona International Speedway on Saturday. The WRL event featured 14-hours of racing in the series’s first single-day race weekend of the year.

Representing R3R in Daytona’s fabled victory circle was the No. 605 Hagerty Drivers Club Porsche Boxster of Jim Ptak, Dennis Neel, Carter Pease and Cole Loftsgard. Starting the race from third, Neel took over control of the lead within the opening hour of the 14-hour race.

The No. 605 driver lineup moved swiftly, each working their tools in the car to extend their lead to a 7-lap advantage. Their on-track progress was halted as lightning appeared, bringing out a 1 hour, 30-minute red flag period.

Loftsgard took over control of the Porsche from Pease on Lap 212 as night began to fall. Completing a two-hour stint, Loftsgard came to the checkered flag claiming the win for the No. 605 Hagerty Drivers Club Porsche Boxster – their fifth consecutive podium appearance.

The win at Daytona moves the No. 605 into the provisional lead in the WRL National Championship standings.

“Today’s win was truly a team effort,” said Loftsgard. “Jim (Ptak), Dennis (Neel), Carter (Pease) and I all knew we had to drive as well and error free as possible as well as keep our Porsche Boxster free of contact. To bring home the win today is an amazing achievement and feeling for the entire Round 3 Racing team. We couldn’t be here without our crew and engineer who executed perfect strategy and pit stops all day long. To call ourselves winners is amazing, especially when we get to do it multiple times in a season.” 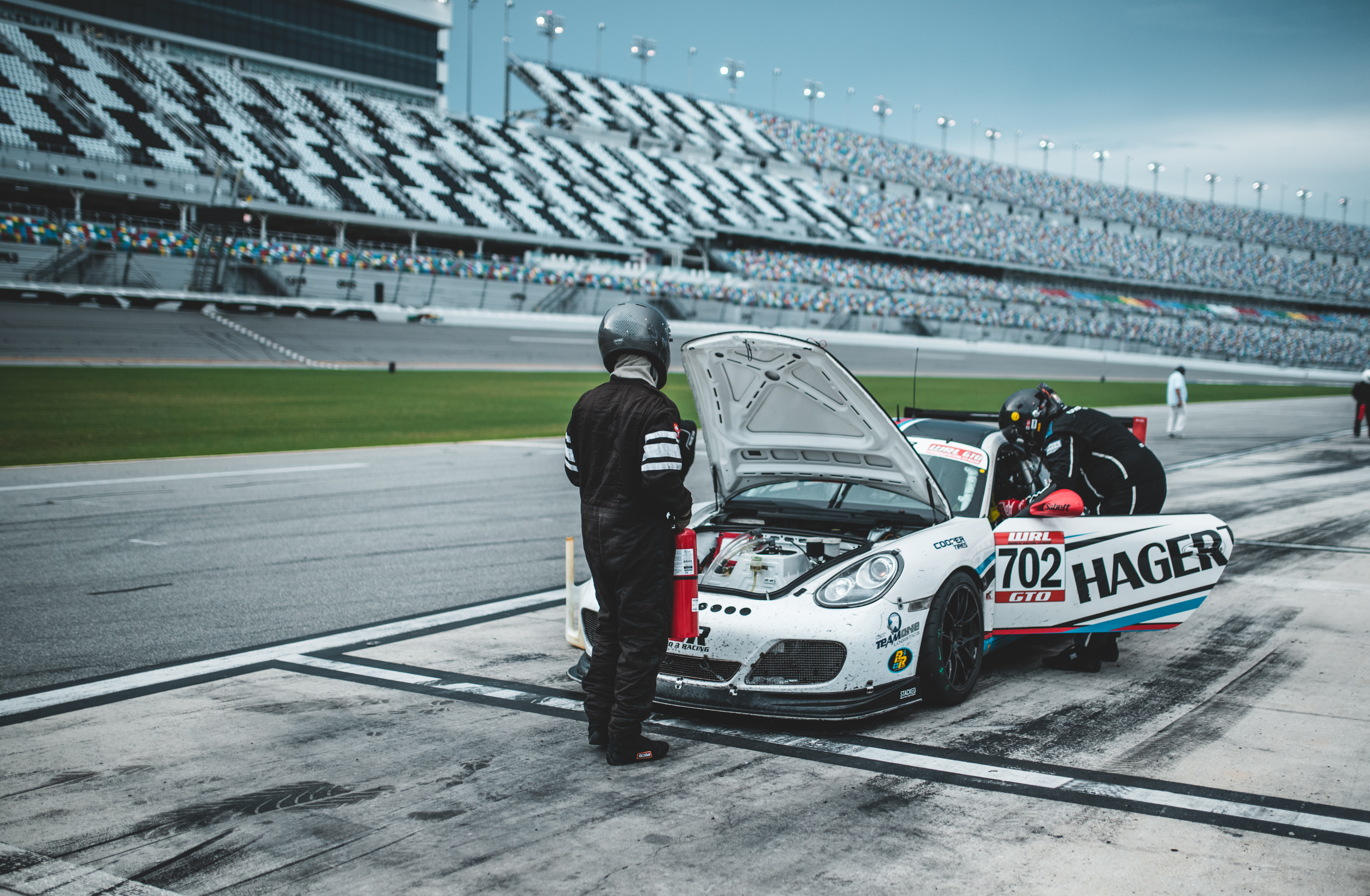 Completing all 14 hours of racing at Daytona, the No. 702 Team Hagerty Porsche Cayman of Sarah Montgomery, Brad McCall and Buz McCall slotted into the 16th-place in the final running order.

Starting 11th, Daytona veteran Buz McCall took the green flag for the start of the endurance race. Battling high temperatures in the car, McCall pushed himself and the Porsche through an opening double stint before handing the car over to his son, Brad McCall, on lap 58.

Keeping the No. 702 Porsche clean through multi-class traffic, the Hagerty driver trio worked through each stint remaining in contention. Tasked with bringing the car home to the checkered flag, Montgomery pushed for the final hour to bring the No. 702 Team Hagerty Porsche Cayman across the finish line in 16th.

“Racing at Daytona is always special and even more so with this team,” said Buz McCall. “We had a good car and the entire team worked hard to complete the entire 14-hour race. Bill Riley was kind enough to share his wisdom of Daytona with us. He has been so successful here and gave us great advice that helped us today and will continue to help us moving forward. Sarah (Montgomery) and Brad (McCall) drove very well during their stints and we will work hard to keep improving.” The Team Cooper Tire driver trio of Loni Unser, Mike Gilbert and Mo Dadkhah were primed for success in the No. 701 Porsche Cayman earning a second-place starting position for the 14-hour endurance race. Gilbert took the green flag and quickly went to work. Close racing in the first three corners caused the No. 701 Porsche to receive a one-lap penalty.

Gilbert, Unser and Dadkhah combined to move back up the running order to second place by lap 182. A timely yellow allowed the No. 701 to return to the lead lap as well as take over the class lead.

On lap 217, the No. 701 Porsche suffered a wheel speed sensor failure causing Gilbert to make contact with the barrier in Turn Five. The mechanical failure forced an early retirement for the Team Cooper Tires team ending their day in ninth.

“It was a disappointing way to end such a great race for us in the No. 701,” said Gilbert. “I was heading into turn five when I hit the brake pedal but the car just didn’t slow down. We were running in the lead and were having a great race but with a mechanical failure, there wasn’t anything we could have done to prevent this. Loni (Unser), Mo (Dadkhah), and I will regroup and be ready for Road Atlanta in July.” Starting from fourth on the GP2 grid, Christian Maloof took the opening stint with Hannah Grisham and Oleg Gorshkov on deck. While Maloof was working on gaining position, an out-of-class competitor struck the left side of the No. 601 Porsche forcing Maloof to pit lane for repairs. Quick work by the R3R crew allowed the Boxster to return to the racing surface albeit five laps down. Unfortunately, an on-track incident forced  Maloof in the bus stop, sending the car into the outside barrier causing terminal damage.

The No. 601 Team Sentinel Porsche Boxster retired on Lap 35 in 12th position.

Round 3 Racing returns to World Racing League competition at Michelin Raceway Road Atlanta. The weekend of racing in Georgia will be made up of two eight-hour races on July 16-18th.