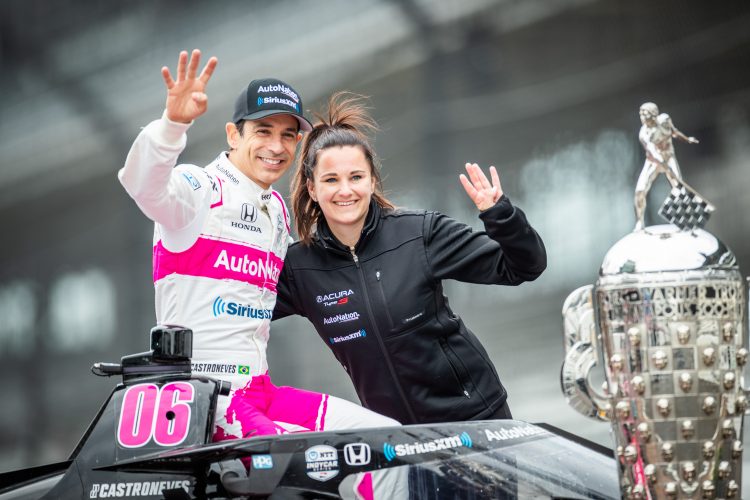 There’s not many ways to describe what it feels like to be a part of an Indianapolis 500 winning team especially when that team is relatively new to the INDYCAR paddock with just five total Indianapolis 50 starts to its credit.

Meyer Shank Racing claimed victory on the 105th Running of the Indianapolis 500 on May 30th, 2021. And to top off the already inexplicable excitement, Helio Castroneves made history in winning his fourth Indianapolis 500 – becoming part of an elite and exclusive club of just three other drivers to do that  in the the long history of the 500.

With two laps to go Castroneves makes the pass for the lead. And although I hadn’t sent a tweet in the last 10 minutes out of fear of ‘jinxing’ the results, as he crossed the line I momentarily jumped with joy for this incredible moment in history. But, as we say in the PR world, once the race is over, our work begins.

I don’t think I could have ever been prepared for the amount of work that was going to come my way (hence why my blog post is coming to life over a month late).

After 30 seconds of celebration, first things first, make THE tweet. While the rest of the team, family and sponsors around me are cheering I put my head down in my phone and get to work.

We’ve long had the belief that we should plan for success and for our client’s success, so I was glad that I had taken the time to go through the post-race ceremonies with INDYCAR staff the day before so I knew what needed to happen. 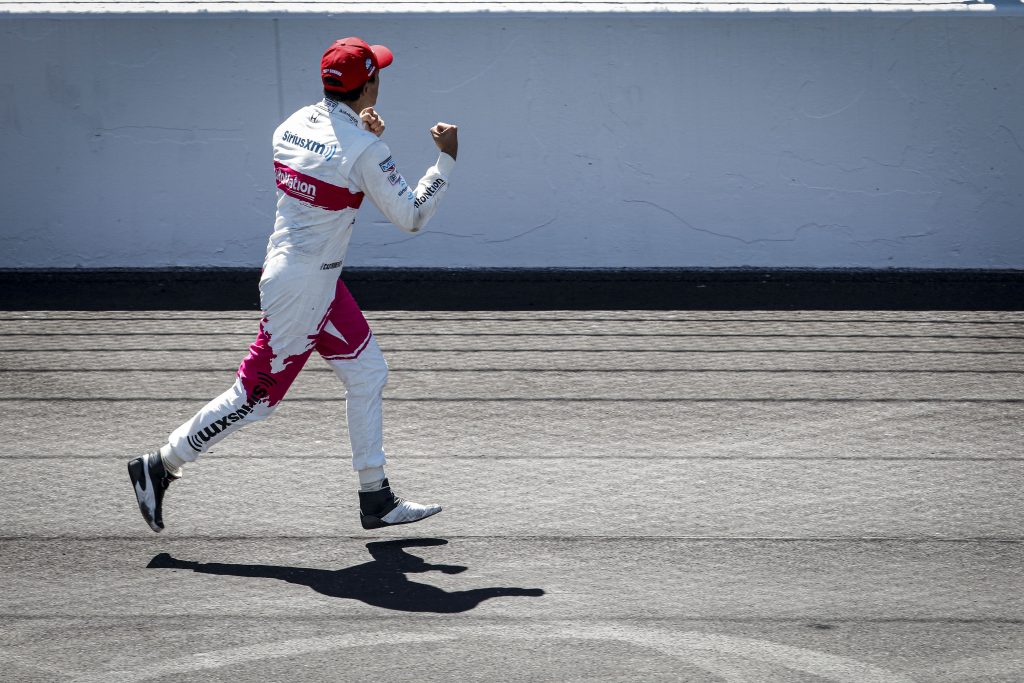 Going with the flow is something that you often have to take into consideration when it comes to PR activities. And despite going through a full post-race run through with the INDYCAR staff the morning prior, things took a different turn from the very beginning. Phase 1, which was supposed to see Helio dramatically pull into victory circle, come out of his car and start his celebration with all the TV cameras in his face.

But when you’re working with a now four time winner those plans take a turn, because #SpiderMan.

Of course the famous fence climb was priority for Castroneves and the rest of the team. Rather than the celebrations beginning at the victory podium, things were moved to the Yard of Bricks on track. Once relocated, a flood of people entered the track but only two TV interviews were to happen – SportsCenter and NBC. The trick though – filtering out the additional media that have joined in on track trying to sneak in their TV spot.

After spending close to 30-minutes on the track we now move to Phase 2.

Once things calmed down on track, we now moved to victory podium. This is where the chaos comes in. The team and sponsors are still reeling in the emotion as the result starts to set in. The podium is filled with all of the MSR crew members, family and primary sponsors. After more NBC interviews happen on the podium, the ring is presented and the milk is poured.

While up on the podium I was able to connect with our graphic designer, Ryan Long who so kindly made me an on-the-spot ‘winner graphic’ for social media which I was able to upload within minutes. After doing the ‘hat dance’ of 6 different sponsor caps things settle down and we move to Phase 3. 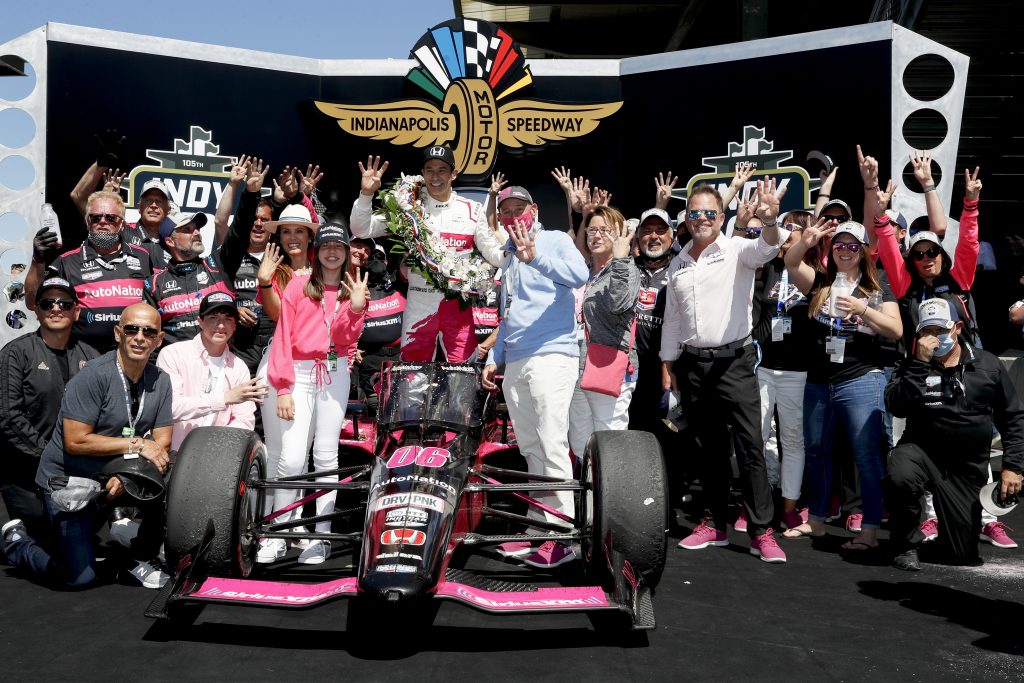 While all of this madness was happening, we still had a very important press release to write. I was fortunate to have Matt Cleary’s assistance after the race as he was able to write the post-race press release for me and we were able to get that send out just 1-hour after Helio crossed the finish line.

Stage 3: Back to start finish

Moving back down to start finish from the podium, Helio, Mike Shank, and Mary Beth Shank take a pace car ride around the track. My job on start finish – to get the team ready for the long list of photos about to happen along the yard of bricks. Team owners and Helio kiss the bricks, Helio’s family kisses the bricks and then the team joins in on the tradition.

Back up to the podium we go. Now that things have calmed down we make a return to the podium for MORE photos with INDYCAR partners. Nearly 15 different groups of partners make their rounds taking photos with Helio – who luckily I don’t think gets tired of smiling! Once finished supervising the flow of photos we now move on to post-race media.

Once the official celebrations die down, now is when I realize that this will be a long night, but in the BEST way possible. It’s now just after 5:00pm and we head up to the post race press conference. One thing that I will forever be thankful for – the buffalo chicken wrap that INDYCAR provided me – I had forgotten how hungry I was! The press conference was the first short ‘break’ that I had to eat, go through the 70+ texts on my phone and update the MSR social.

Following the press conference, we moved onto scheduled media stations from 6:00-8:45pm. But we weren’t done yet!

Once the sun began to set, the final item of the day was up next: the RACER Magazine cover photoshoot on the yard of bricks. A quick 20-30-minutes on start finish and then our day was done – but my workload was just beginning.

One of the most asked questions I got was, “so did you celebrate with the team?” After a 16 hour work day, I still made sure to stop by “Binkley’s,” a local spot that is a favorite of a lot of team members for a team celebration. But as the rest of the gang celebrated the victory through the night, I was off to bed for an early start to another full day on Monday.

8:00am: It’s Monday morning and more media began. Today was a complete day of activities from 8:00-4:00pm with 18 different zoom interviews set up. Everything from the TODAY Show, to Forbes to USA Today, Helio spoke with all the big hitters. The day for me was a mix of shuffling Helio to and from the Media Center from his Motorcoach to make sure he stayed on the very strict schedule.

Helio had just a one hour break before he had to attend the victory celebration at the track but instead of taking that time to take a much needed breather, he chose to fulfill a promise that he made during the Spectacle of Homes earlier in the weekend – if we won the Indy 500, he would come back and visit the family’s house who he visited just days prior.  And he did just that. So off to the Indianapolis-based home we went, joined by four local media stations. The experience was exceptional but in all honesty, all I could think about was driving home, changing and coming right back to IMS in time for the victory celebration!

While the team and crew enjoyed a nice cocktail hour, I was back to work. Several local media outlets attended the event and I was slotting in both Helio and Mike Shank into live TV spots. Once we successfully conquered the media, I was finally able to enjoy an amazing moment as INDYCAR hosted a dinner, on the yard of bricks, just for MSR. Who can say they had a private catered dinner, at IMS, the night after the 500. It was incredible!

Although the INDYCAR and IMS obligations were now fulfilled my work still continued, and would continue through the next 14 days.

After knocking out close to 30 interviews since Sunday, I now needed to tackle the long list of interview requests sitting in my inbox. Luckily for me, scheduling is a strength of mine, but boy did it challenge my organizational skills. And once again flexibility would be the only thing to get me through the next two weeks.

Working with Helio’s PR lead in Brazil, we scheduled in 50+ interviews in 10 days between the US and Brazil. This required constant communication with Helio (who mind you was also in the process of moving, so he is already suffering from lack of time). Interviews constantly changed, we experienced technical difficulties, there were last minute requests, there were language barriers – just to name a few of the challenges we faced.

At this point in time, I have now gone through two full weeks of all out post-500 work and I couldn’t ask for better experience. Although the crazy influx of media interviews had died down, the next year would still be filled with Indy 500 obligations.

We want to make the absolute most of this opportunity for MSR and Helio, and there is a lot of work to do yet/ But, it is an amazing opportunity. And we we haven’t even talked about what goes into adding a new face to the Borg Warner! All along the way we are already planning for the 106th Running of the Indianapolis 500. The job is never over, but the fun and experience always continues.

Being in charge of the PR for an Indianapolis 500 winning team is something that you can only prepare for so much. I’ve learned to go with the flow, take it all in and appreciate every moment of it.