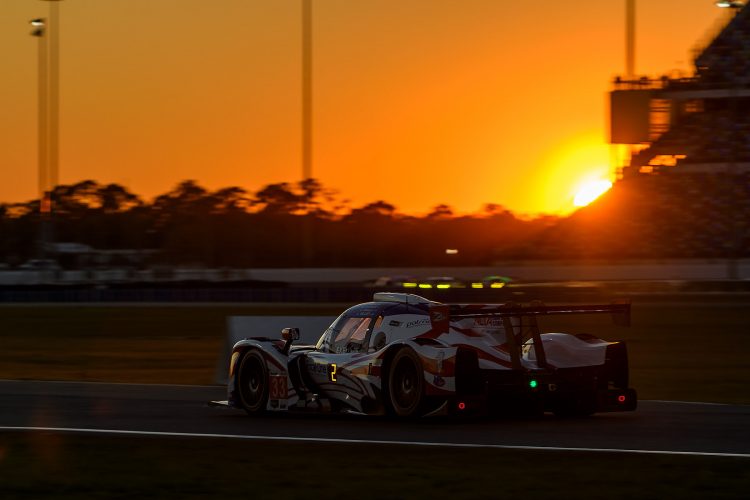 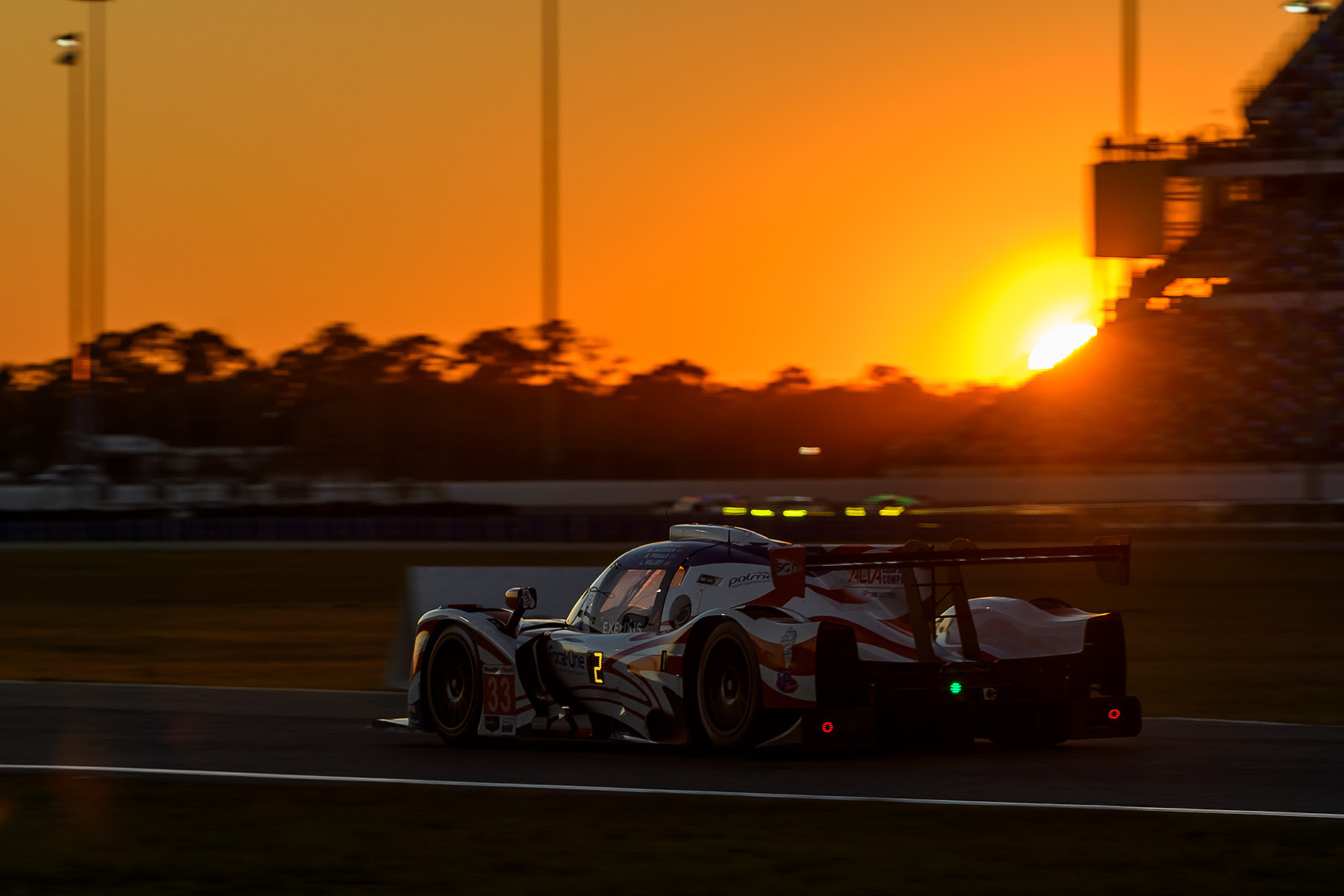 DAYTONA BEACH, Fla. (30 January 2022) – For the second time in two years, Sean Creech Motorsport (SCM) captured a podium finish in one of the greatest endurance races in the world, the Rolex 24 at Daytona International Speedway – season opener of the 2022 IMSA WeatherTech SportsCar Championship.

The Rolex 24 has a well-earned reputation as one of the most grueling motorsports events in the world. For the SCM team, the 24-hour roller coaster ride included freezing temperatures that rendered tire management absolutely critical, lap leads by both veterans and rookies, and a stomach bug that nearly upended their driver lineup. 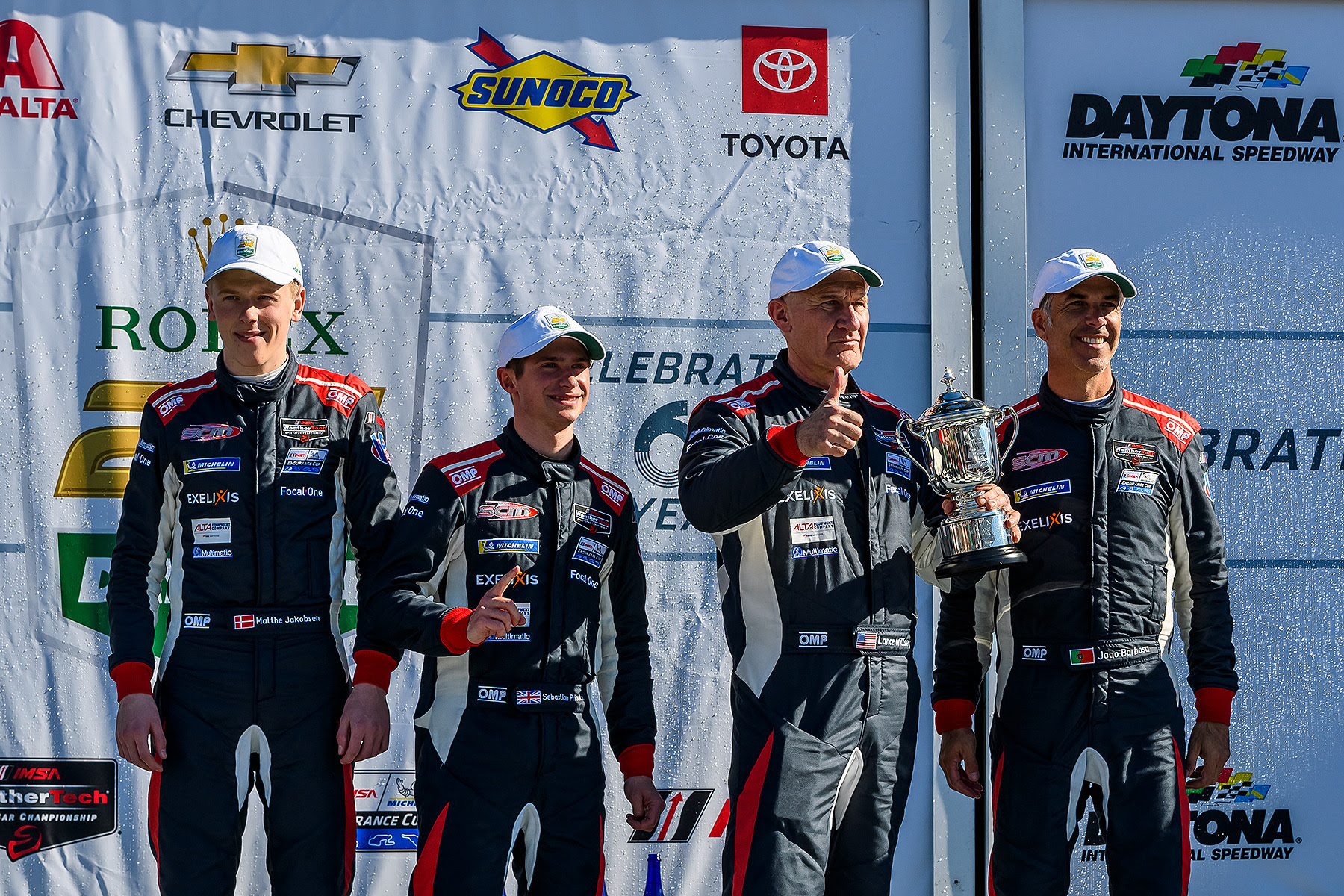 A stellar lineup of veterans and rookies took the No. 33 SCM Exelixis Ligier JS P320 to the grid with the belief that they would contend for the victory, having scored a second-place finish in the team’s first Rolex 24 (though Sean Creech has competed in over half of the 60 Rolex 24 races). Four-time Rolex 24 winner João Barbosa and Dr. Lance Willsey (competing in his 12th Rolex 24) were joined by two rising sports car racing stars – Malthe Jakobsen and Sebastian Priaulx. The quartet took to the 3.56-mile combination road course and NASCAR oval on Saturday afternoon looking to improve that one step on the podium.

With grid positions set by last weekend’s 100-minute race, Willsey took the green flag in fifth position. After a single stint, he handed off to Barbosa, who quickly took the No. 33 into its first race lead of the day, for 14 laps. The veteran pair traded the seat back and forth through the first seven hours, steadily pacing in the top three.

As the sun set and temperatures dropped further, tire management became the name of the game. Barbosa and Willsey both found that the Michelin tires required at least three laps to come to temperature, with Willsey terming the out lap in the frigid air “diabolical.” 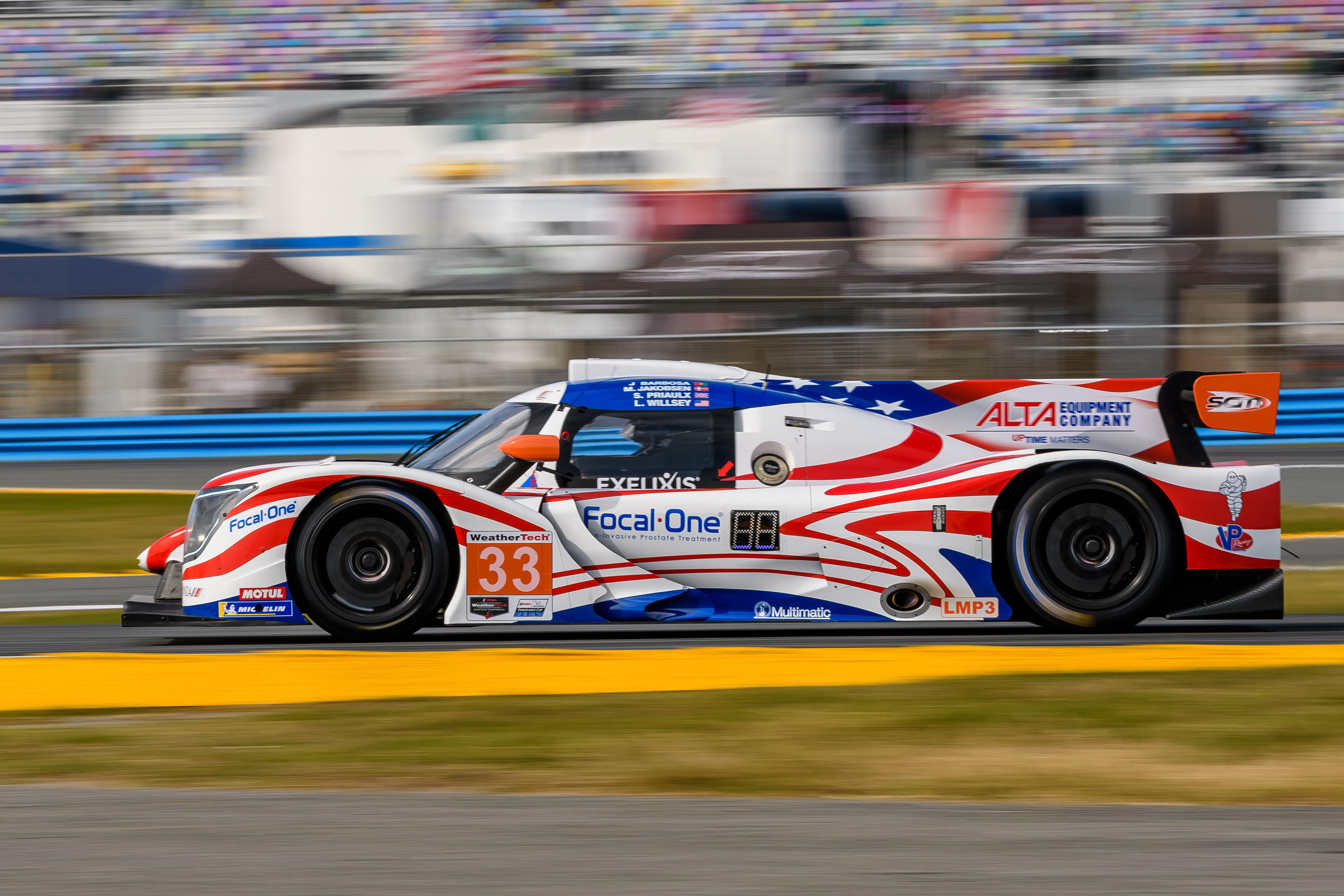 Priaulx was the first of the team’s rookies to head out on track for his first stint in a 24-hour race. Unfortunately, Priaulx immediately ran afoul of IMSA’s on-track systems, unknowingly running the red light at pit out, which resulted in a drive-through/plus 60-second penalty. Returning to the fray in third position, the 21-year-old Guernsey native was determined to gain his lap back – which he did in short order, gaining his lap back and retaking the lead with 14 hours remaining.

What made Priaulx’s eventual triple stint that much more impressive was the fact that he  was battling the effects of a stomach bug throughout the stint, but refused to let that affect his performance behind the wheel.

Priaulx handed off to the 18-year-old Jakobsen, who took the helm under a full course caution. Taking the green with a 4.5-second lead, the young Danish driver put 15 seconds between himself and second position within five laps before handing back to Willsey. But as the morning hours marched on, and temperatures inched closer toward freezing, the caution periods fell against team strategy. With eight hours remaining, the team found itself in fifth position, two laps down but digging hard.

As Willsey completed his final stint, it was up to the three remaining drivers to continue the march. Willsey acknowledged the on-track deficit but reiterated his belief that the SCM trio would be able to get back into contention.

“There’s no question that it’s really difficult out there,” said Willsey. “I was struggling to get the tires to come in, the fronts especially. But the car is really good – and even though we’re a couple laps down, I like the driver lineup we have remaining, fast guys who can take this car to the front. The team has done a great job, we’ve done nothing but fuel and tires and that’s every team’s dream. It’s about blocking and tackling now, setting up the rotation for the final four hours.”

Willsey’s words would prove to be downright prophetic.

Jakobsen fought hard to get the leader behind him and took advantage of a timely full course yellow with eight hours remaining to climb to within one lap in second position. He handed the wheel to Priaulx, who piloted the car into the very welcome daylight hours as it became clear that the five contending LMP3 cars were on very different strategies and sequences but all battling loose race cars. Priaulx valiantly took the wheel for a double stint, fighting the balance and his stomach to complete his drive time, and the final five hours would come down to a rotation of Barbosa and Jakobsen.

Barbosa put the car in third position through his late race double stint, setting the team’s best race lap (on lap 510 of 670 race laps, with a time of 1:42.172) before handing the car to Jakobsen on the final pit stop. Claiming second place, Jakobsen held on through an extremely intense final 30 minutes that saw significant amount of paint exchanged throughout the field to give the team its second straight podium finish at Daytona.

“It was a long night!” said Jakobsen, whose stints came during the better part of 13 hours of darkness. “I got in rather late so all the running I did was in a very short time frame. It was so much fun. I’m happy to finish on the podium, even though it was so close to grabbing the win. I had no expectations, being my first 24-hour race. It was so tough, and I was really happy with how it turned out. The team did a great job, it was fun and that’s the most important part.”

“This was one of the most challenging races here, with the cold temperatures at night,” said Barbosa, who captured his 11th Rolex 24 podium. “We really had to manage the tires, but it was the same for everyone. It’s sweet and sour right now. You always want to win, but it’s such a tough race so to finish on the podium with this team is a real testament to all the work they’ve put in. They know what they’re doing and they did a tremendous job, as did all the drivers. We lacked just that little bit of luck with the yellows, and some speed at the end. But we’ll try again next year – we have to wait a full year but I’m so proud of this effort.”

“It was tough,” said Priaulx. “It’s as mentally hard as physically hard when you’re not well, but you have to push through it. It takes a lot out of you. I caught a bug and didn’t feel well under the safety car but you have to deal with it. I’m happy that we got through and that I was able to finish my stints. It was hard to manage in the cold, and it was frustrating to deal with the penalties, they put me really into the GTD traffic, but we gave it everything we had. It’s a privilege to be here, I appreciate the chance to race here. The team did a great job and to finish on the podium in my first Rolex, you can’t describe it. It does hurt a bit, not to get that top step, but hopefully I can come back!”

“When all you do for 24 hours is fuel and tires, good things are going to happen,” said Willsey. “I can’t say enough about the job that the crew did, the car ran perfectly for 24 flat out hours. We pushed this car hard, and here we are. Huge thanks to our partners, Alta Equipment and Focal One for the support.”

“We wanted one more step,” said Creech. “We’ve finished second to Bill Riley two years in a row. He’s a great guy and a great competitor, but we really wanted to get that win. We had a couple mistakes that set us back, but that’s how it goes. Neither Seb nor Malthe had ever been in a multi-class endurance race and they both did great; they didn’t put a wheel wrong. Lance and Joao were solid as usual, but the racing gods just didn’t lean our way. We’ll head to Sebring to go for the win and come back here next year to tackle this one again.”

Next up for Sean Creech Motorsport will be the 70th Annual Mobil 1 Twelve Hours of Sebring March 16-19 at Sebring International Raceway. The race will be broadcast live in the U.S. on the NBC family of networks, while international viewers can watch via IMSA.tv. IMSA Radio will also be available at IMSA.com.

About SCM
Team leader Sean Creech has competed in a multitude of sports car series from 1990 until the present day, includingGroup C, IMSA GTP, WTSCC, Grand-Am, SRO World Challenge, and IMSA. SCM moved to the WeatherTech Series in 2021 with João Barbosa and Lance Willsey. 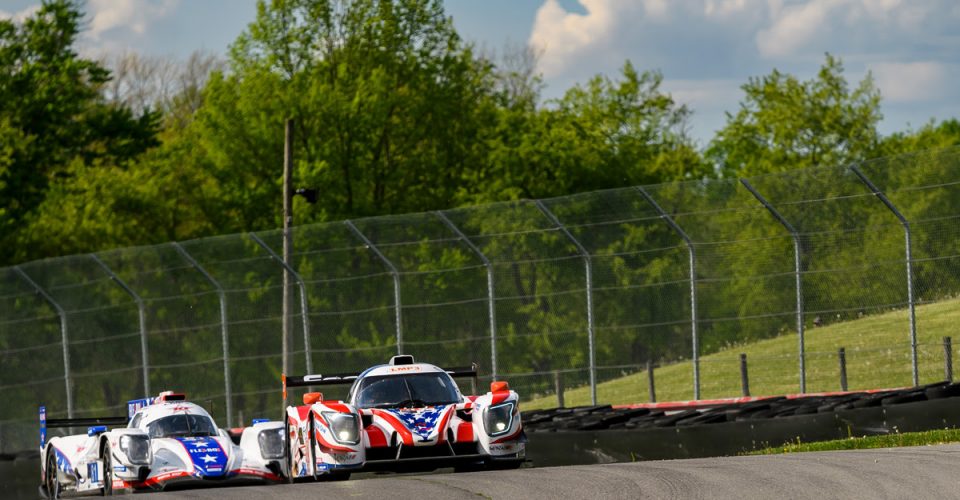 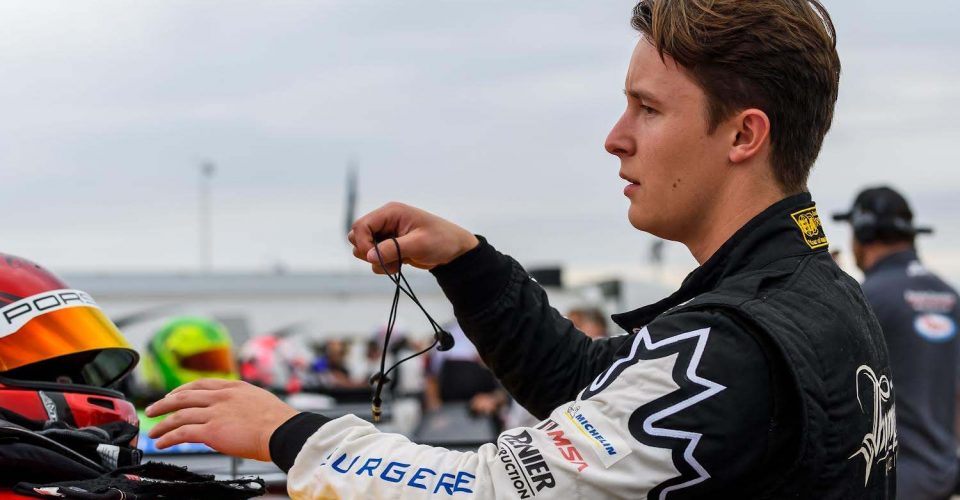 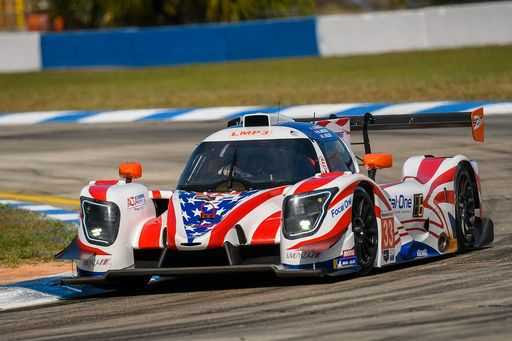