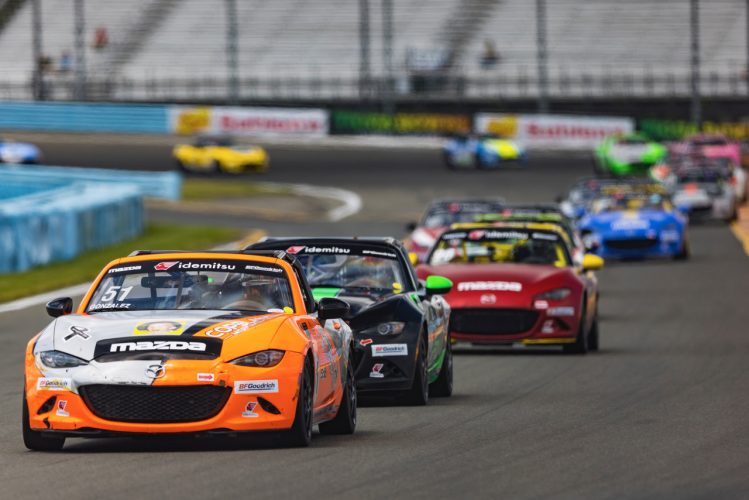 WATKINS GLEN, N.Y. (June 24, 2022) – Carrying the image of a recently-lost friend on the hood of his Mazda MX-5 Cup race car, Tyler Gonzalez (No. 51 Copeland Motorsports) benefitted from good use of the draft and some good timing to win Round Seven of the Idemitsu Mazda MX-5 Cup presented by BFGoodrich® Tires at Watkins Glen International on Friday.

Rookie Joey Atanasio (No. 43 Formidable Racing Development) nearly had the win, but ultimately settled for second and was followed to the line by Aidan Fassnacht (No. 15 McCumbee McAleer Racing), who started the race from the back of the 29-car grid. All three podium finishers celebrated with new trophies and a celebratory spray of grape sparking juice, with none of the top three having hit legal age just yet.

The 45-minute race was slowed by four periods of full-course-yellow. This effectively broke the race into four mini sprints. Polesitter Connor Zilisch (No. 72 Hixon Motor Sports) led early but fell back after the first restart.

His teammate Bruno Carniero (No. 21 Hixon Motor Sports) held the lead for several laps as well, but also lost out on a restart. The stop-start nature of the race continued through the final segment, which saw Zilisch’s day go from bad to worse as contact with the wall brought out one final caution. The field took the checkered flag behind the pace car with Gonzalez in front of the field. 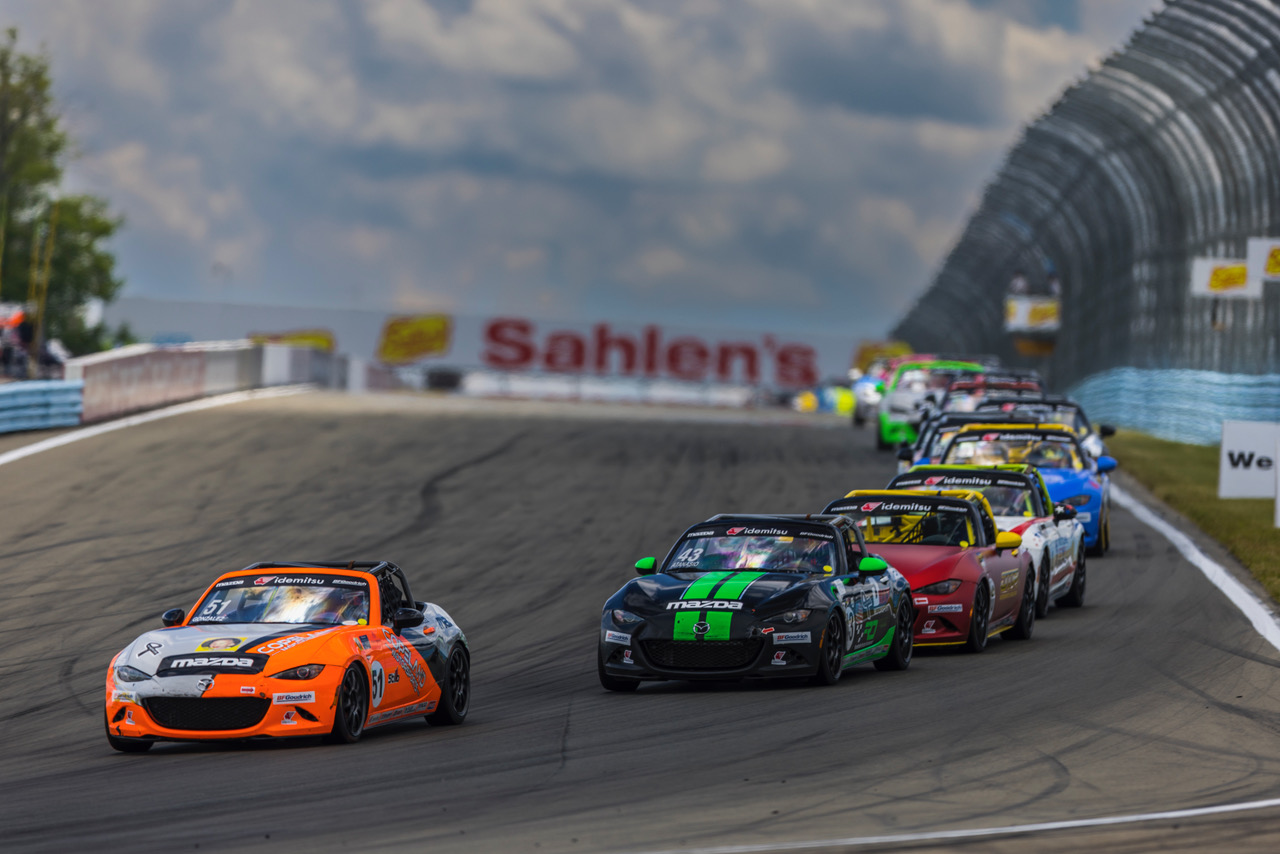 “That’s Nick Breukner–he’s one of my friends through karting and unfortunately he just passed away from Leukemia,” said Gonzalez of his tribute from victory lane. “He was an inspiration to all of us in the racing community-just a true American hero, honestly.”

Fighting in podium position in the final stages of the race, the timing for the final caution was ideal for Gonzalez, who had to fight his way forward at the finish.

“The draft is huge,” said Gonzalez. “That’s practically how I won the race. I kept drafting forward. I saw the leaders in the pack ahead of me and the car felt amazing. I knew we had the speed. I knew we could do something with it. It was yellow after yellow, so I knew at that last restart I had to get up front because there was only five minutes left and that’s how it played out. Then, Joey [Atanasio] made a little mistake and I popped out at the last second and the train decided to push me because I was on the inside. It was a good race overall.”

Rookie driver Atanasio rued missing out on the victory, but was pleased to open his Watkins Glen weekend on the podium. 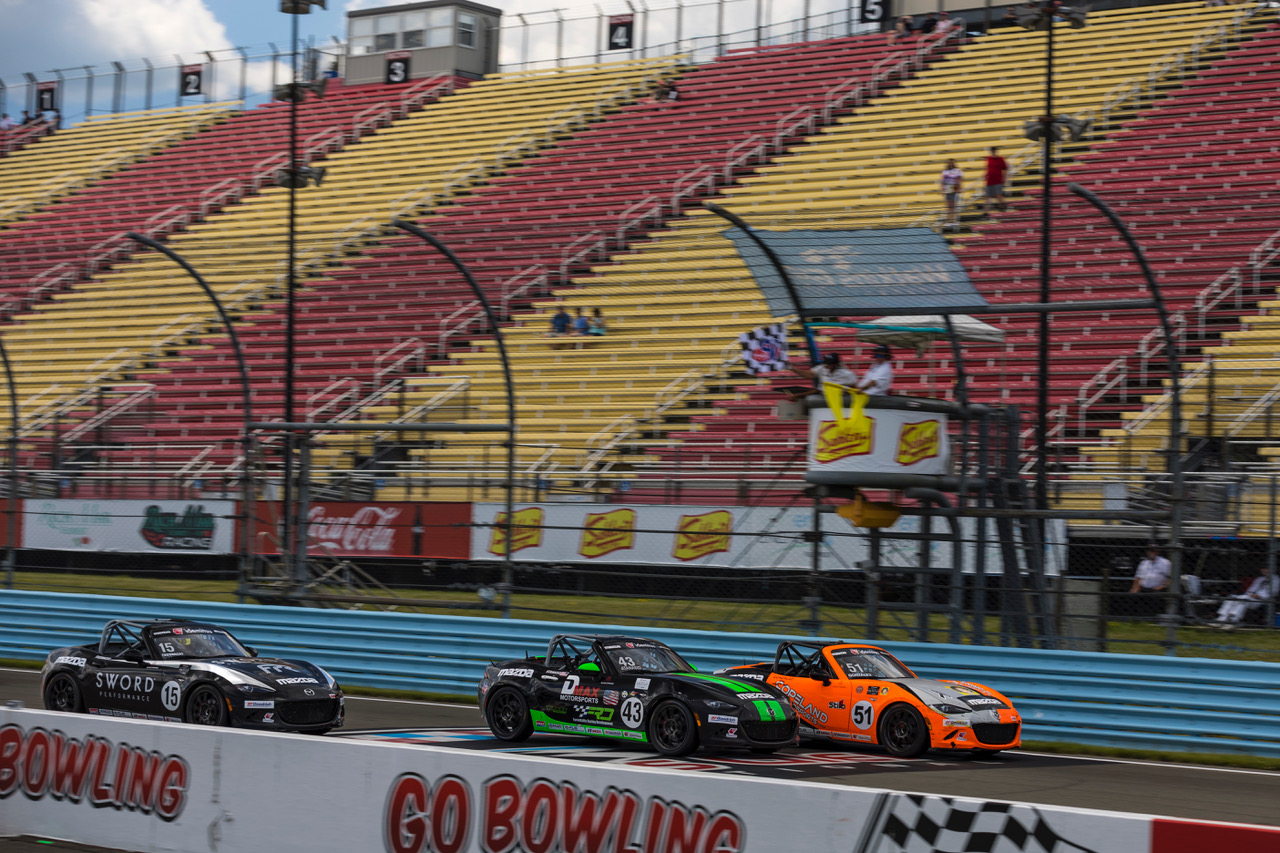 “I sort of had a plan and I kind of screwed it up in Turn Eight and that got me into second,” admitted Atanasio. “I’m still happy with the result. Thank you to my team. I was pretty bummed when that last yellow came out. I saw there was only one minute to go, and I really wished I could have battled for the win. But we’re still here on the podium. We’re hoping for a better result tomorrow.”

Earning his third podium of the season, Atanasio is building a nice points lead for himself in the Rookie of the Year standings. That year-end honor comes with a generous $80,000 payout from Mazda.

Atanasio wasn’t the only rookie on the podium; Fassnacht earned his first ever podium in spectacular fashion. In post-qualifying technical inspection, a noncompliant oil filter was found in Fassnacht’s car, which moved him to the back of the grid. He didn’t let it phase him and climbed all the way to third by the checkered flag.

“I don’t know if I’ve fully processed it yet. I’m just numb right now,” Fassnacht said. “When you’re on the track, you’re just doing your job, it’s always the next car. But I know in the next few minutes, it’s going to set in that I just got my first professional podium and I did it from last place. It means a lot. It means a lot to have my family here with me when I get my first podium. It means a lot to have Sword Performance support. I’m glad I could make those people proud.”

The visit to Watkins Glen marks the first track that Fassnacht has previous experience on, which he made the most of to keep moving forward. 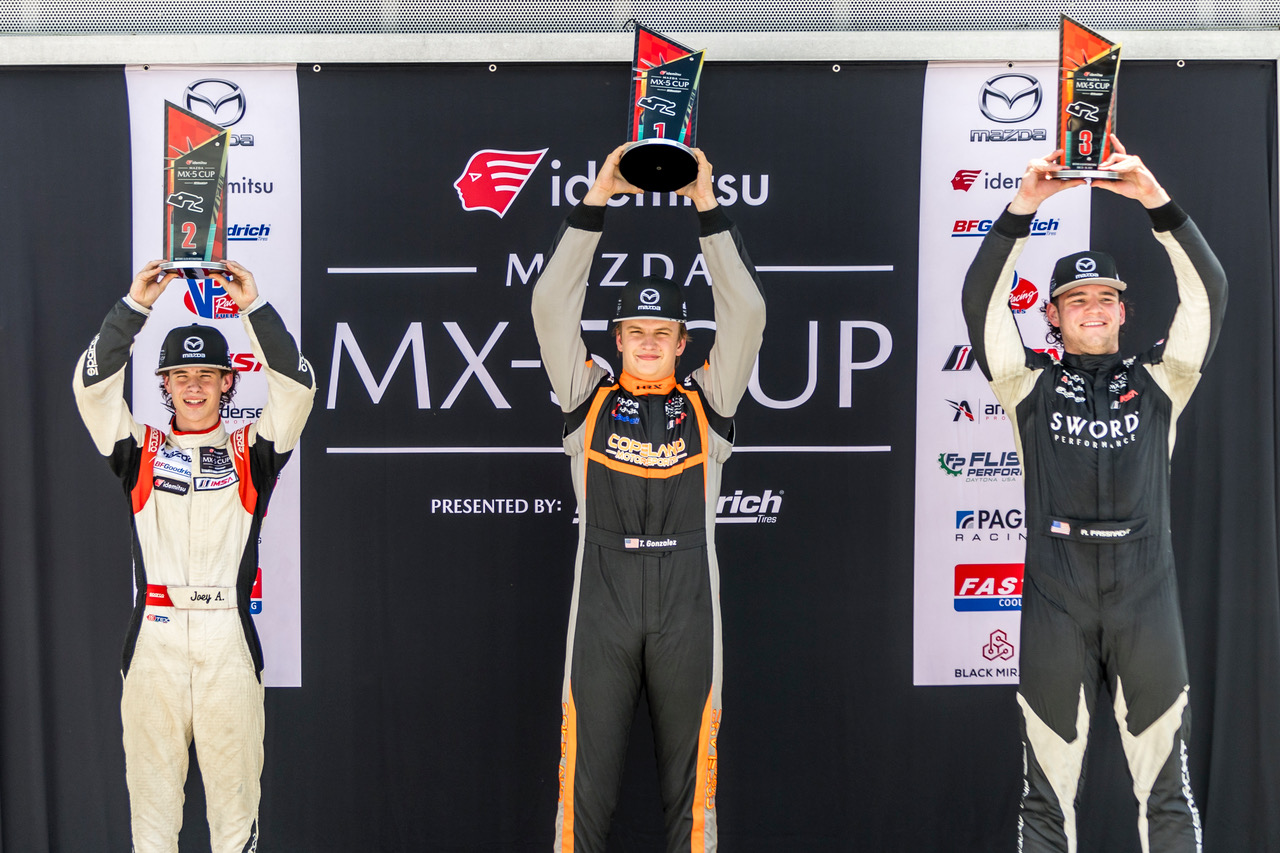 “I took every opportunity I had to make a move, said Fassnacht. “I wasn’t being overly aggressive; I was letting the race come to me. You have to put yourself in precarious situations if you’re going to go from 27th to third, but it’s all calculated. I tried to stay level-headed, which is difficult to do when you get a penalty right before the race. I’m just glad I was able to focus up and really get my head down and move forward.”

Fassnacht also claimed the $1,000 on offer as Hard Charger with his big run to the front of the pack, and his McCumbee McAleer Racing crew chief also netted $1,000 for the accomplishment.

Saturday’s Round Eight race is slated for 10:00am ET. Selin Rollan (No. 87 Hixon Motor Sports) is slated to start from pole position, but did have a mechanical failure that prevented him from finishing Round Seven.

The race will be live streamed on RACER.com and IMSA.com/tvlive. 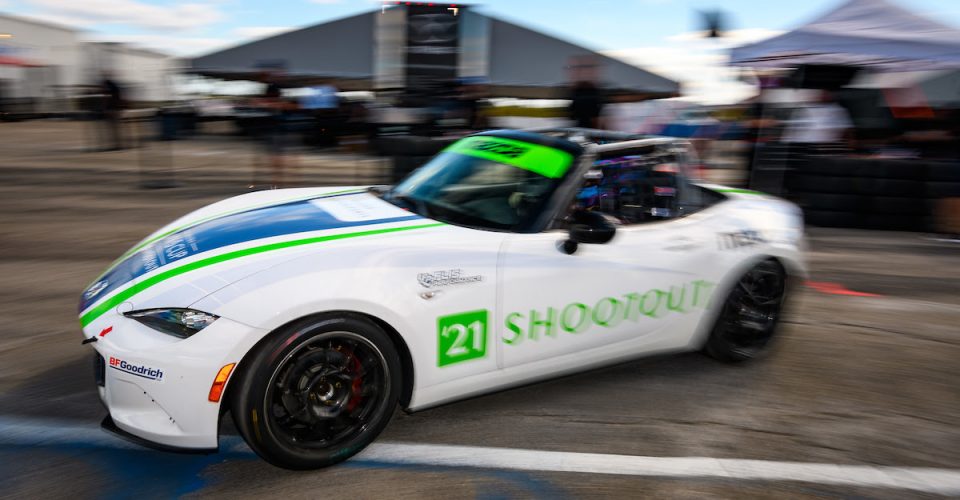