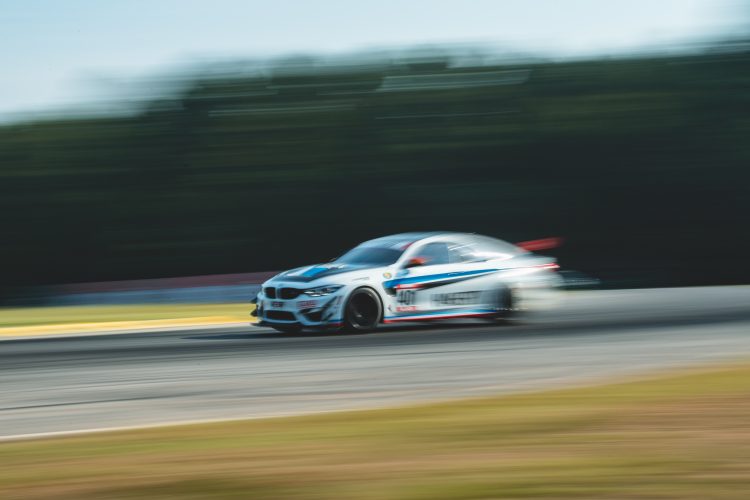 ALTON, Va. (5 September 2022) – Round 3 Racing went into round eight of the World Racing League powered by Hagerty event at VIRginia International Raceway looking for redemption on last year’s run of bad luck. All four cars endured lengthy red flags during the races, with the crew and drivers contending with both heavy rain and Virginia’s warm summer temperatures. Despite some setbacks, the team earned that redemption–and some new hardware– with five podiums throughout the weekend.

The Hagerty Motorsports team got off to a fast start, scoring their fifth pole award of the season on Friday. Cole Loftsgard set the quick time once again for the GTO field. Loftsgard started in the car for Saturday’s race, battling a vibration caused by a piece of debris. He then passed the controls to the Hagerty-liveried  BMW GT4 to Brad McCall in second place three hours into the race. McCall worked his way up to first place when a caution rang out due to a car in the wall. Just as the double yellow was called, the BMW spun and was hit head-on, forcing the car to retire for the weekend.

“It was a great weekend for the team overall,” said Loftsgard. “It was awesome to see the phenomenal results for all our teammates. The 401 will be back strong as ever at Sebring. Next time, we’ll see if we can put all four cars on the podium.” 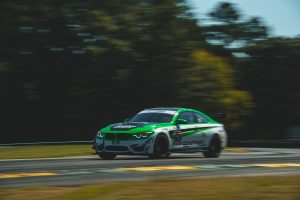 Starting the weekend with a qualifying run that didn’t fully show the kind of car the No. 609 team had, Ron Hugate, James Candelaria, and Brian Ghidinelli were determined to show forward progress come race time.

Hugate started the race from behind the wheel, quickly charging forward several spots. Two hours into the race, Candelaria took over the BMW GT4 entry. Shortly after getting behind the wheel, he was forced into the grass to avoid contact with another car, causing a spin into the wall. Candelaria came down pit lane so the team could check for significant damage; luckily, the car was able to continue. With just under three hours remaining in Saturday’s race, the Round 3 Racing squad made the strategic call to park the BMW for the day in preparation for Sunday’s race.

Ghidinelli started Sunday’s 8 hour enduro from behind the wheel with a grid placement of nineteenth; within the first twenty minutes of the race, he had worked his way up to sit ninth and was soon fighting for the eighth position. After a red flag and pit rotations, Ghidinelli passed the BMW off to Hugate in the lead. Hugate came out of pit lane in fourth during the green flag stop. Hugate maintained the fourth position while handing it off to Candelaria for the remainder of the race. Candelaria drove to the front of the field, keeping his position to bring home their second podium of the season.

“What a great way to end the weekend,” Candelaria said. “Coming into VIR, we knew we had the car and the drivers to run up front. Excellent driving by brian and Ron put us in a position to challenge for the win. Despite not being able to hold off Choice Racing, I’m proud of our performance. Next stop SEBRING!” 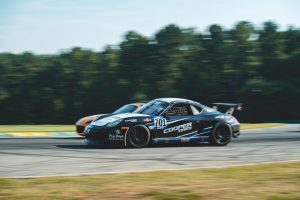 The No. 701 Cooper Tires team began Saturday’s race with Zack Ping in the seventh position behind the wheel. Ping drove the car up to fifth place before handing it over to Ayla Agren in fifth. Agren battled for position, making up for lost laps and handing it over to Loni Unser in fourth place. Unser faced two long red flags but pushed to second place once the action resumed to take the checkered flag in podium position.

The team started Sunday’s race from sixth with Agren behind the wheel. Agren quickly jumped to fifth as a caution rang out within the first five minutes of the start. After almost three hours in the car, she handed it over to Unser in second place. Unser maintained the top three during her stint, passing the Porsche to Ping in second. Ping passed for the lead and protected the position through two lengthy red flags and many cautions to race to a hard-fought class victory.

” It was a great weekend for the 701 team with Loni, Ayla, and myself,” Ping said. “We were able to stay consistent and, for the most part, clean. Having a second-place finish on Saturday and a win on Sunday helps us in the championship. Huge shoutout to Aaron, our car chief, Brad, and Buz McCall for letting me be a part of the great team and trusting me to drive their car. Sunday was just simply lovely; all Round 3 Racing entries for Sunday’s race finished on the podium! I’m looking forward to the next race!” 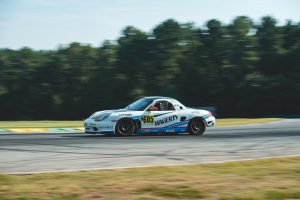 During Saturday’s race, Hannah Grisham, Buz McCall, and Carter Pease shared the driving duties on board the Hagerty Drivers Club Porsche. Pease took the opening stanza of the race, fighting for over three hours before handing the car over to McCall. A penalty pushed the team back to fourth, but Grisham battled forward to third, where she brought the Boxster home after undergoing a couple of red flag stops in the final hours of the race.

“Overall, the No. 605 team had a great weekend,” said Grisham. “We battled hard for the third place finish during Saturday’s race after some misfortune came our way. On Sunday, I started in the car and was able to drive it from third to first, where we held our position throughout the race. Thank you, Hagerty, Brad, and Buz, for making this all possible!”

The Round 3 Racing crew will have to wait nearly two months to return to race action, heading  to Sebring International Raceway, October 28-30, for another doubleheader weekend. The Sebring event will mark the penultimate race of the weekend as the 2022 championship heads to a finale in December.