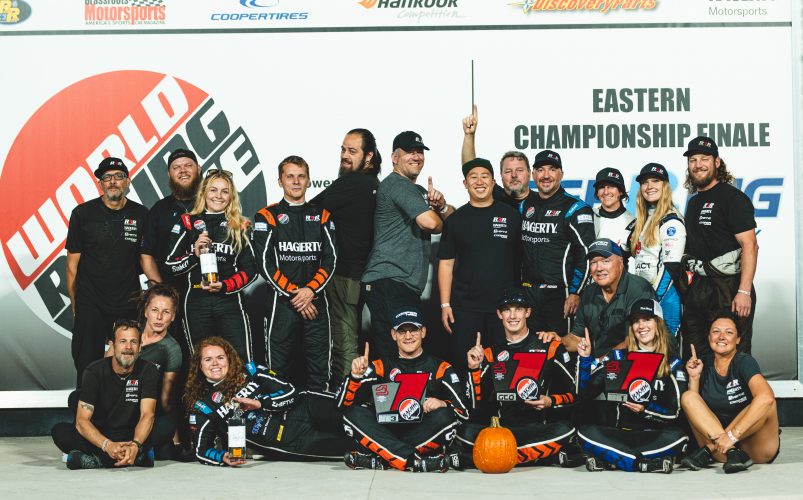 Big weekend for Round 3 Racing squad with five wins, and one runner-up finish

Sebring, Fla. (31 October 2022) – The World Racing League powered by Hagerty (WRL) hosted the Eastern Championship at Sebring International Raceway this weekend, and the team made the most of every lap of the double-header event, emerging with a championship as well as a lot of new hardware with a five-win weekend.  Despite some interruptions in the racing action with caution periods and red flags on the bumpy former airfield circuit, Round 3 Racing brought home podium results with three cars on the top of the podium on Saturday and the two repeat winners and a runner-up result on Sunday. 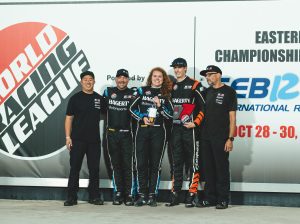 Cole Loftsgard set the fastest lap on Friday, earning the No. 401 Hagerty BMW pole position for the sixth time this season. Sarah Montgomery was the first to pilot the BMW M4 GT4 following a lengthy hour long red flag period. Going back to green in second place, Montgomery maintained the gap to the lead car before handing it over to Brad McCall. After a two-hour caution period, McCall took the green flag at the restart at the front of the GTO class. Loftsgard took the final stint after a round of pit rotations and another caution period, Loftsgard began his stint from the fifth position. Loftsgard battled his way to the front of the pack and he made the pass for the lead with just ten minutes left in the race and didn’t look back as he crossed the checkered.

Loftsgard was first in the driver’s seat of the Hagerty BMW for Sunday’s race, starting in second. After nearly a four-hour stint, Loftsgard passed the car to McCall in the lead, where McCall maintained position to pass over to Montgomery with three hours to go. Montgomery fell to third through pit-stop rotations but made her way back to second when the checkered flag dropped.

“The weekend was one of the ‘Goals Achieved’,” said McCall, owner of Round 3 Racing. “Since we started running in multiple classes in WRL, it’s been our goal to win every class in which we’re competing. Goal Achieved! With the high level of competition in WRL and the grueling nature of these races, it is very difficult to even win in one class. We were trying to do it in three! The entire R3R team is over the moon with excitement.” 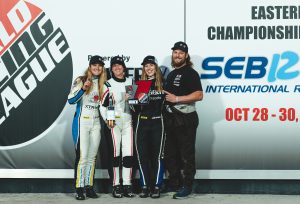 Teaming up with Shift Up Now, R3R fielded its first all-female team in WRL for the Sebring weekend. Sabré Cook was first behind the wheel of the No. 701 Team Cooper Tires Porsche Cayman during Saturday’s race. The team had qualified third in the GP1 class the day before. Cook worked her way through the field of mixed classes to run in the lead. Cook then handed the Cooper Tires Porsche Cayman to Erin Vogel, who continued to extend her lead. Loni Unser took the final stint in Saturday’s race, crossing the finish line with a two-lap lead on the GP1 field.

To start Sunday’s eight-hour enduro, Vogel took the wheel first from a fourth-place starting position. After working her way up to second, Vogel passed the No. 701 Cayman to Unser just after the two-hour mark. Last behind the wheel was Cook, who took over with about three hours left in the competition. Cook drove up to first with one hour remaining, where she took the team’s second win for the weekend.

After Saturday’s win, the No. 701 Team Cooper Tires Porsche Cayman clinched the Eastern Championship title in the GP1 class.

“It feels awesome that we were able to get multiple wins this weekend,” said Unser. “It really shows that an all-female team can dominate just as much as an all-male or co-ed team. We really proved a point this weekend. It was also great to win the Eastern Championship for the No. 701 Porsche Cayman this weekend. I couldn’t have been happier to be part of it with Round 3 Racing, Erin (Vogel), and Sabré (Cook). Thank you to Shift Up Now for helping with this partnership.”

Friday’s qualifying run left the No. 605 Team Hagerty Drivers Club Porsche Boxster starting from fourth for Saturday’s race. Dennis Neel was first up in the Porsche Boxster and just two hours into the race, Neel made his way up to the class lead. After pit stop rotations, Hannah Grisham took over the Boxster from third before making her way back up to lead the pack. Carter Pease was handed the car in first place for the final stint. Pease maintained the top position to bring home a first-place finish.

Grisham took the first stint in the No. 605 Porsche, starting in third for Sunday’s enduro. Grisham made her way to the lead before the two-hour mark with a one lap lead on the rest of the GP3 field. Neel took the seat next and continued to build a gap between him and second place. Neel passed the Boxster to Pease with almost three hours left in the race – maintaining a one lap lead on the GP3 field. Pease crossed the finish line with ease, earning the second win of the weekend.

Sunday’s win locked in the No. 605 Boxster for the Eastern Championship, bringing home the title.

“It was a great race weekend here at Sebring,” said Neel. “We were able to win on Saturday and picked a win today (Sunday), and then we also won the Eastern Championship. I’m really excited for our team, Hannah (Grisham), Carter (Pease), and I, to have that type of performance coming down here at the end of the season. It’s nice to have that momentum going into COTA (Circuit of the Americas). We’ll see what we can do there.”

Round 3 Racing looks to keep the podium momentum going at Circuit of the Americas December 2nd – 4th for the WRL powered by Hagerty National Championship. Practice and qualifying will start on Friday the 2nd, followed by two eight-hour races on Saturday and Sunday.