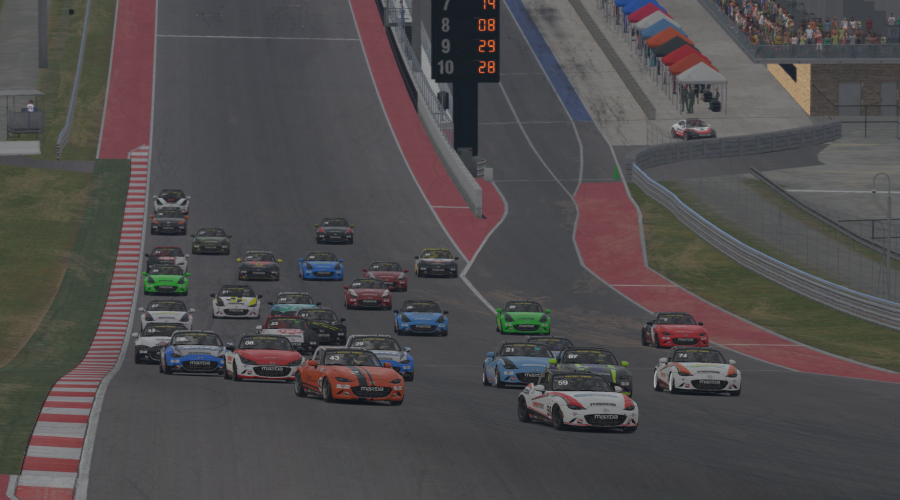 13 May 2020 – After narrowly missing the podium in Round One, Brian Lockwood took a convincing win in Round Two of the RicmoTech iRacing Global Mazda MX-5 Cup on Tuesday night. Matt Cresci kept a hold on the points lead with a runner-up finish after having won the series opener at Barber Motorsports Park. The race featured 35 entries and once again mirrored the racing that is featured in Battery Tender ® Global Mazda MX-5 Cup presented by BFGoodrich Tires ®  in real life, with close competition through the field all the way to the checkered flag.

Cresci earned the pole position and lined up next to Lockwood (No. 43 Sick Sideways Racing) on the grid at Circuit of the Americas (COTA). Cresci  held the lead in the No. 59 Slipstream Performance entry through the opening laps. Lockwood took the lead briefly on lap four, but Cresci took it right back the following lap.

Soon the lead pack was established; Cresci, Lockwood, Selin Rollan (No. 87 Sick Sideways) and Michael Carter (No. 08 Carter Motorsports) pulled away from the rest of the 34-car field. 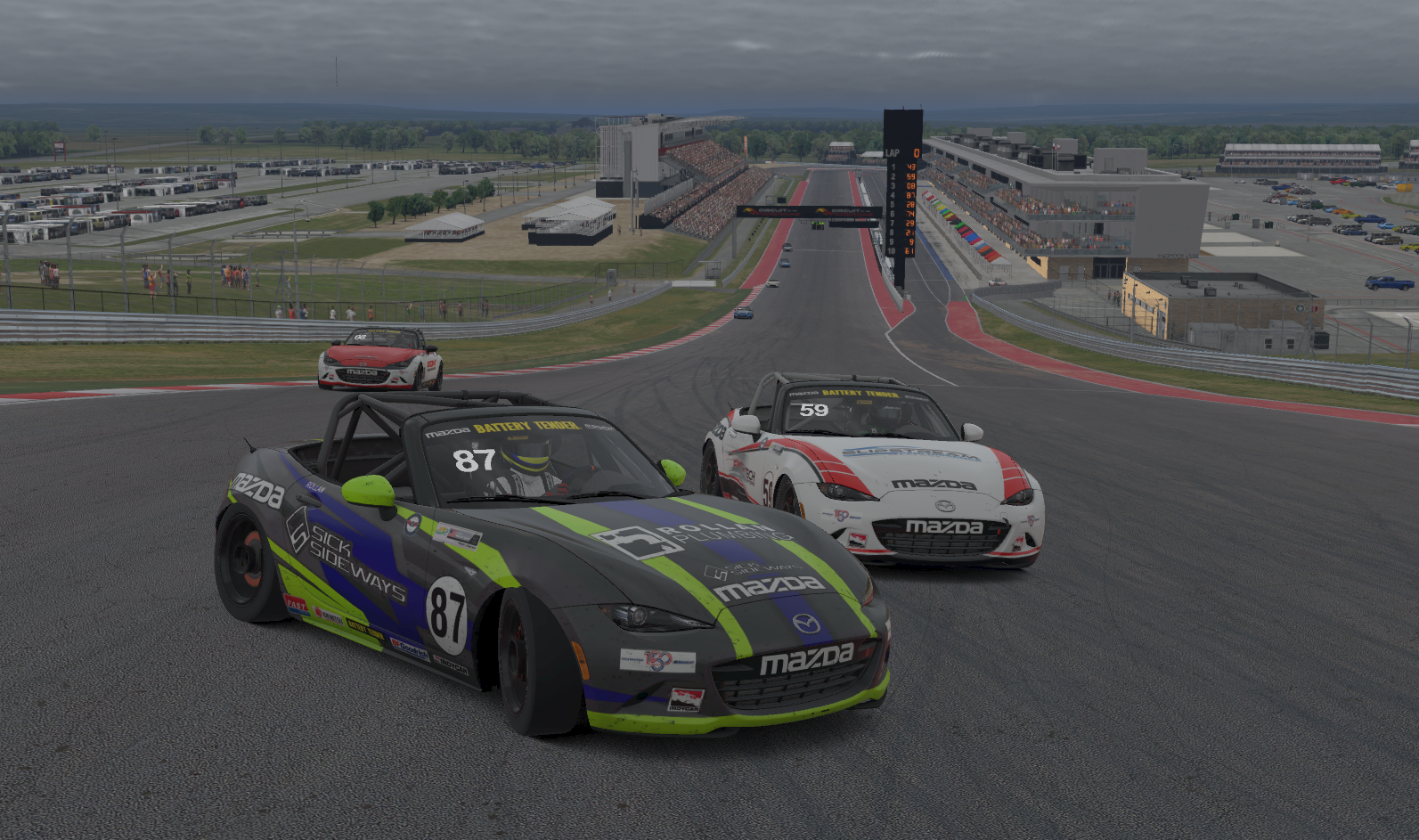 Approaching the halfway mark of the 40-minute race, Lockwood made his move for the lead in Turn 12 and this time, it stuck. He worked hard to break free of the draft and when he finally did, he was able to open a comfortable gap. He crossed the finish line with a 1.24-second margin of victory.

The win is sweet redemption for Lockwood, who was favored to take the win in Round One at Barber Motorsports Park, before an avoidable contact penalty sent him to the back of the pack.

“I’m really happy to win this one,” Lockwood said. “I thought this track would be a weak spot for me. I’m not a huge fan of COTA. The iRacing version isn’t much different from the real track. I’ve been training on iRacing for a while and spent a lot more time practicing COTA than I did last year.

“The biggest difference is not being able to take the lines you would take in real life. In real life we use all the runoffs, but iRacing really limits that.”

Cresci was able to hold onto second, but the battle for third came down to the final lap, when Rollan was able to get around Carter and take third. 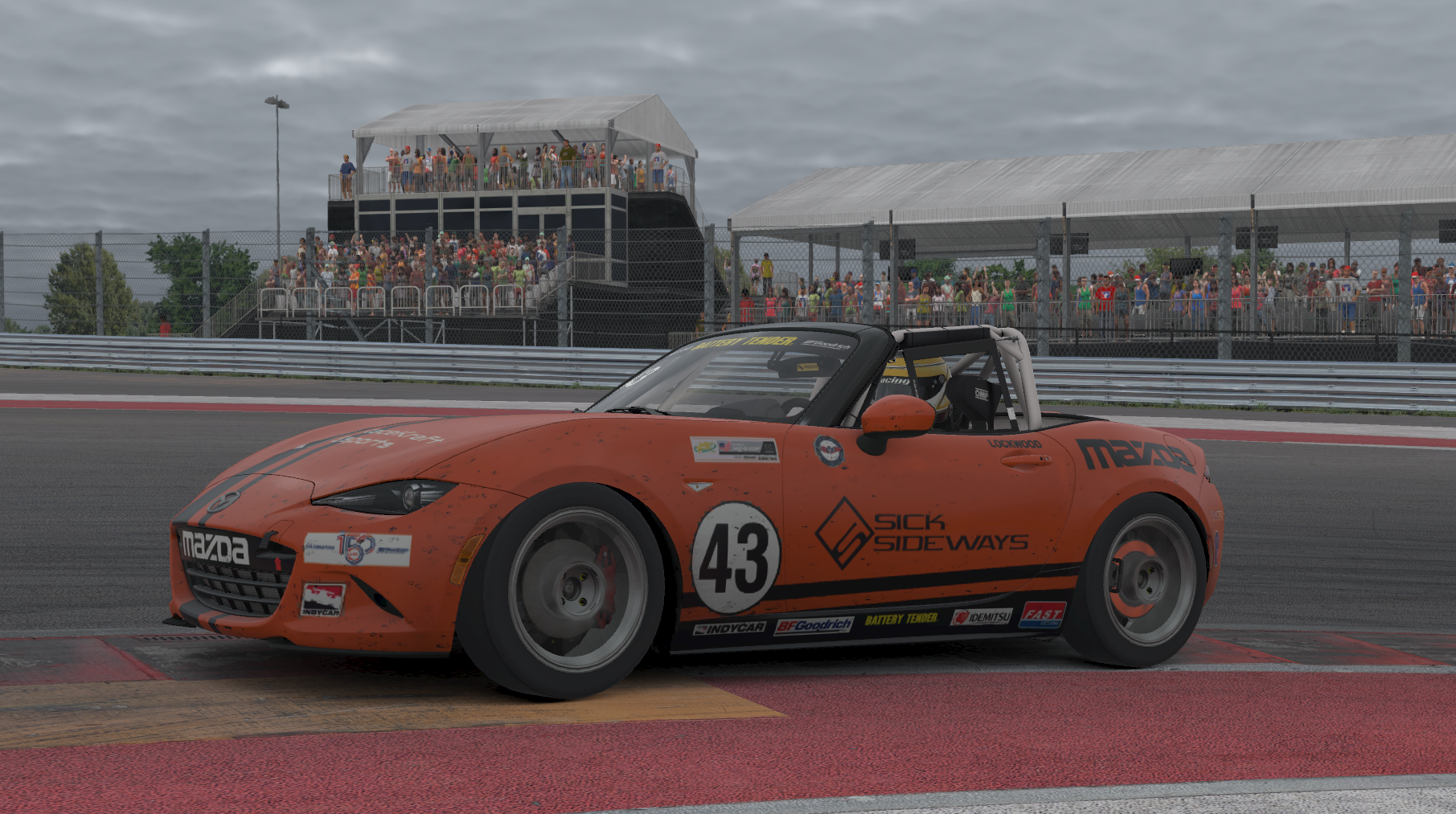 “I was hoping Selin and Brian would start battling and help me get out of the draft, but the complete opposite happened,” Cresci said. “We have a set amount of times we can exceed track limits. [Lockwood] used them very wisely, while I saved mine until the end. That’s why you saw the gap close near the end when I caught his draft. I guess I should have used those sooner!

“It was the best result I could have hoped for. I just wanted to keep it on the track. It got a little dicey halfway through, so I’m happy to stick it on the podium.”

For Rollan, finishing third at COTA was a huge improvement from Barber where he finished 10th.

“Barber wasn’t my strong suit, but I like COTA a lot,” said Rollan, who took his first-ever real world Global Mazda MX-5 Cup win at the circuit in 2018. “I think that showed. It was an exciting race and I’m really happy to be on the podium. Michael and I have raced for many years even before MX-5 Cup. It was great to have him there and battle with him. It was also cool to have the 2016 (Cresci), 2017 (Rollan) and 2018 (Carter) Mazda shootout winners all racing together. I was glad to have a cushion back to fifth place.”

Stevan McAleer (No. 28 McCumbee McAleer Racing) fared much better in Round Two than he did in the series opener at Barber where contact on the opening lap took him out of contention. McAleer made up five spots during the race to finish fifth.

Provisionally, Cresci continues to lead the points. He is followed by Lockwood and Glenn McGee who finished 10th at COTA.