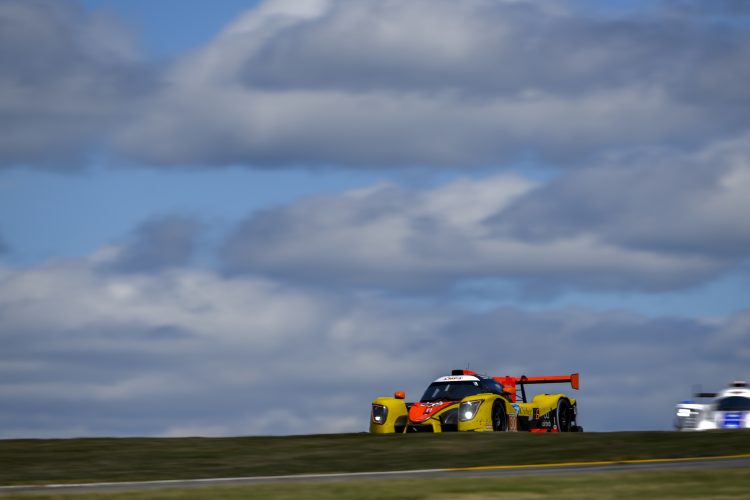 Mooresville, N.C. (10 November 2022) – After closing out its first-ever full season IMSA WeatherTech SportsCar Championship campaign just 60 points shy of the LMP3 class team title in 2022, Jr III Racing (“Junior Three”) is looking to build on its strong WeatherTech run with a program that is primed for expansion in 2023.  With its potent 2022 driver lineup returning to the team next season, the Charlotte-based team will return to the WeatherTech LMP3 ranks in 2023.

With the staff, cars, and equipment already in place, Jr III is well-prepared to manage a second WeatherTech full-season effort starting with the Rolex 24, and the team is weighing its options for an expanded program ahead of the 2023 season.

“We will have Garret (Grist) and Ari (Balogh) back in the No. 30 for the full-season starting at Sebring, which is fantastic as they are a great pairing,” said team owner Billy Glavin.  “We have a lot that we can build on in our second full-season here at the WeatherTech level and I’m thrilled that we are able to continue with both of them next year.”

Having expanded into the IMSA ranks in 2019 after establishing a successful vintage racing program, the team recently acquired another Ligier LMP3 chassis in anticipation of continued growth. Having this depth of machinery would allow the team to enter the 2023 season with backup cars for both of the primary entries should it grow into a full-time two car effort.

The 2023 IMSA schedule once again sees the LMP3 class slated to race in the Rolex 24, although the event will not count towards the class championship. The Sebring 12 Hour will kick off the season-long LMP3 championship battle, as Jr III will look to go one better than the run to second place it earned in the 12 Hour in 2022.

“We want to run the 24—but only if the program is capable of winning the race,” said Glavin. “There are no championship points, so winning is the only thing for that race and we don’t want to be there just to make up the numbers. With our IPC program winding down, we have all the people and equipment we need to run a very competitive two car program in WeatherTech.  We’d like to have that be a full-season campaign, but we are also getting a lot of interest in the endurance-only aspect, so that is our focus right now, sorting through those scenarios and potentially getting some testing in as well.”

The team made its IMSA debut in the 2019 season finale IMSA Prototype Challenge (IPC) event, scoring the Bronze Cup at Michelin Raceway Road Atlanta. That set the stage for a full-season IPC campaign in 2020 that grew into a two car IPC effort in 2021. After scoring the team’s first IPC podium with a run to second place at Mid-Ohio with Terry Olson and Mike Skeen, the duo made the team’s first-ever WeatherTech entry at Road America that same season.  Quickly building momentum with the program, the team returned to Road Atlanta for the WeatherTech finale, taking an impressive second place in LMP3 competition.

“Having just launched the professional racing side of our program in 2019, we’ve been able to continue to grow to support what our customers are looking to do. Right now, the interest in IMSA is just over the top, so we feel like it is a very good place to be. Obviously with the GTPs coming in, there is a lot of excitement, but that’s also true of the other categories like (LM)P3, so we are just trying to make the best decision to be competitive with whatever program we decide to go with.”

Jr III Racing is looking to announce its finalized 2023 IMSA plan in the next few weeks.